Adult acquired flatfoot (AAFD), formerly described as posterior tibial tendon dysfunction (PTTD), is a debilitating condition with complex pathology defined by the collapse of the medial longitudinal arch of the foot with continued progressive deformity of the foot and ankle. This activity describes the evaluation, diagnosis, and management of acquired flatfoot deformity and highlights the role of team-based interprofessional care for affected patients.

The anatomy of the foot and ankle are complex, with multiple structures involved in the stability and function needed to walk and bear weight. A structure principally involved in the development of adult acquired flatfoot is the posterior tibial tendon. In addition to plantar flexion, the posterior tibial tendon is the primary inverter of the foot.  The posterior tibial tendon inserts principally on the navicular tuberosity, but also has lesser insertions on to other tarsal and metatarsal structures.[3]  The spring and deltoid ligaments are crucial to the stability of the foot and ankle. The spring ligament, which is the ligament most frequently involved in adult-acquired flatfoot, supports the ankle by connections from the sustentaculum tali of the calcaneus to the navicular. The primary role of the spring ligament is to support the head of the talus.[4] The deltoid ligament is usually affected later in the progression of the adult acquired flatfoot. The superficial deltoid ligament has a wide insertion on the navicular to the posterior tibiotalar capsule. It is the primary support against tibiotalar valgus angulation. The deep deltoid ligament prevents axial rotation of the talus, where it inserts, from its origin on the intercollicular groove and posterior colliculus. The deltoid ligament as a whole is critical in supporting the articulating surfaces of the ankle and the spring ligament.[5]

Acquired flatfoot grading is by the Johnson and Strom classification system, which has classification grades of I to III.[6]  Myerson added a fourth grade in 1997.[7] The classification system aids practitioners in identifying AAFD severity and also can guide treatment plans.[8] Stage I disease characteristically presents with posterior tibial tendon tenosynovitis with no arch collapse. Patients with stage II adult acquired flatfoot will have foot collapse and will be unable to perform a single-leg heel rise. This stage further subcategorizes into stage IIa and IIb. Stage IIa is foot collapse with valgus deformity of the hindfoot but no midfoot abduction, while in stage IIb midfoot abduction is present. Patients with stage III adult-acquired flatfoot will have fixed deformity with hindfoot valgus and forefoot abduction. Patients with stage IV deformity will have ankle valgus secondary to deltoid ligament attenuation.[9]

Acquired flatfoot was historically attributed to posterior tibial tendon deficiency, although now the understanding is that the ligamentous structures of the ankle play a role in adult-acquired flatfoot development.[1][8]  The dysfunction of the posterior tibial tendon is a multifactorial process. In many patients, there is a preexisting flatfoot, and many patients are also obese. Another factor is a relative hypovascularity of the tendon as it makes an abrupt turn posterior to the medial malleolus; this predisposes the tendon to rupture due to insufficient repair.[10] Episodes of previous trauma, corticosteroid injections, arthritis, neuromuscular conditions, and diabetes all predispose to the development of an adult acquired flatfoot.[11]

The posterior tibial tendon is critical in maintaining the appropriate gait and function of the foot. Contraction of the tibialis posterior causes the inversion of the foot and locking of the transverse tarsal joints granting stability for push-off.[3] Deficiency of the posterior tibial tendon leads to an unstable transverse tarsal joint and forefoot abduction, allowing unopposed action of the peroneus brevis. The ensuing abduction of the forefoot and transverse talar joints also displace the force of the calcaneal tendon laterally, further accentuating the valgus defect of the foot.[14] The continued strain on the static stabilizing ligaments eventually leads to their attenuation. Most commonly, the spring ligament is affected, failure leads to medial and plantar subluxation of the talar head relative to the navicular. Failure of the deltoid ligament will lead to a valgus position of the talus within the ankle mortise.[1][3][5][9][11] These events may occur in a stepwise fashion, corresponding to Johnson and Strom classification system. However, some patients develop a valgus talar tilt without a fixed flatfoot deformity.[5]

It is essential to evaluate the patient with suspected adult acquired flatfoot during weight-bearing. There are specific hallmark findings of adult acquired flatfoot for which practitioners should look. While the patient is standing with the provider behind excessive abduction of the forefoot can be noted by the “too many toes” sign. This test is positive if the practitioner can see more than the fifth and part of the fourth toe. Inspection and palpation over the posterior tibial tendon at the area of the medial malleolus may demonstrate swelling or pain. On the lateral aspect of the foot pain may be elicited if there is impingement of ligamentous structures.[15] Single and double heel rise tests may be performed to assess the strength of the posterior tibial tendon. Failure to invert the foot on heel rise or perform heel rise at all is considered indicative of posterior tibial tendon dysfunction.  Ankle range of motion requires assessment. Effort should be made to correct valgus deformity in a range of motion exercise to evaluate for fixed deformity. A fixed deformity of the subtalar joint or fixed abduction of the forefoot has implications in treatment.[3]

The gold standard for the evaluation of adult acquired flatfoot is weight-bearing radiographs. Radiographs are necessary in the anteroposterior, lateral, and hindfoot views. These views will assess the degree of arch collapse, particularly by measuring the lateral first tarsometatarsal angle, and forefoot abduction at the talonavicular joint. Talar head uncoverage can also be measured in the setting of stage IV disease by the lateral talonavicular angle. Lateral views of the foot can also display naviculocuneiform and first tarsometatarsal collapse. Arthritis should be carefully assessed on all radiographic films as this may have implications on treatment options.[15]

MRI is typically not needed for evaluation of adult acquired flatfoot; however, it may be beneficial for some patients with ligamentous involvement that may alter surgical treatment planning; this is particularly relevant for patients with medial peritalar instability, who have improved functional outcomes with deltoid-spring ligament reconstruction.[16]

Treatment with orthotic devices, such as low-articulating ankle-foot orthosis, cast-boot walkers, and other ankle-foot orthoses in conjunction with NSAID therapy and physical therapy have a resolution of symptoms 87% of the time according to one study.  Other studies have success rates of 67 to 90% with conservative measures.[15]

Surgical treatment is indicated in patients who have attempted conservative therapy and are not satisfied with their results. Surgical treatment depends on the stage of the disease, as well as other factors including medical comorbidities, functional status, and use of tobacco.

Surgical management of stage I disease is uncommon, but if required patients should undergo posterior tibial tendon tenosynovectomy, debridement, or flexor digitorum longus tendon autograft. There is a concern that repair of the posterior tibial tendon may experience complications with long-term failure; therefore, surgical treatment should be carefully considered prior to any intervention.[9]

Stage II disease treatment has been successful by medializing calcaneal osteotomy in addition to a flexor digitorum longus transfer. One study showed 87% of patient satisfaction with this treatment after a mean follow-up of 15 years.[19]

Stage III disease becomes more challenging to treat due to the fixed nature of the defect. Arthrodesis is the standard of care, with double and triple arthrodesis being common. Double arthrodesis entails a fusion of the subtalar and talonavicular joints. Triple arthrodesis involves the calcaneocuboid joint in addition to the two joints mentioned above. Double arthrodesis has the advantage of reduced arthritic complications and reduced joint stiffness associated with calcaneocuboid fusion. Unfortunately, joint fusion has an inherent loss of mobility, and patients may struggle on uneven ground. Risk of nonunion, deltoid insufficiency, and ankle valgus is also present.[3]

A recent meta-analysis of surgical treatments for adult acquired flatfoot was conducted to study the efficacy of different therapies further. This study analyzed different radiographic angles to measure the effectiveness of each procedure, including medial calcaneal osteotomies, lateral column lengthening, and double and triple arthrodesis. The conclusions of the study suggested that all treatment types result in significant improvements for the patient.[21]

While the diagnosis of adult acquired flatfoot is relatively straightforward, there are several diagnoses that a provider needs to rule out when acquired flatfoot is suspected. These include adult flexible flatfoot, tarsal coalition, Charcot foot, neuromuscular flatfoot, and arthritic, post-traumatic, and iatrogenic deformity. A careful history and physical can rule out most of these etiologies.[22]

Adult acquired flatfoot that is left untreated can progress to more severe stages that require more invasive treatments. Early diagnosis is critical and can even help avoid surgery in some patients. As the disease progresses into late stages, the need for the patient to get an ankle fusion increases. With an ankle fusion, the patient essentially has an immobile ankle joint, and many recreational activities are affected.

Acquired flatfoot appears to be associated with obesity, diabetes, hypertension, and other disease processes that are treatable with a healthy lifestyle and weight reduction. Patients with adult acquired flatfoot may benefit from the treatment of their other medical comorbidities. Additionally, patients may prevent further disease progression once diagnosed with the use of an appropriate orthotic device. Most patients who use an orthotic device in conjunction with PT and or NSAID therapy will not need any surgical intervention.[15]

Acquired flatfoot is a common disease that when recognized early, is highly treatable with excellent outcomes. All members of the healthcare team can play a role in the identification, treatment, and follow-up of care for patients with acquired flatfoot. This team may consist of family practitioners, specialty-trained nurses, orthopedic and foot and ankle surgeons, physical therapists, and radiologists. As with all orthopedic surgeries, a physical therapist must work closely with surgeons to assure adequate recovery and slow progression to full activity. Family practitioners may be the first physicians to see the patient and diagnose the disorder. They should be aware of the basic diagnostic criteria and treatment protocols so that patients can be referred to surgeons when non-operative management is futile. 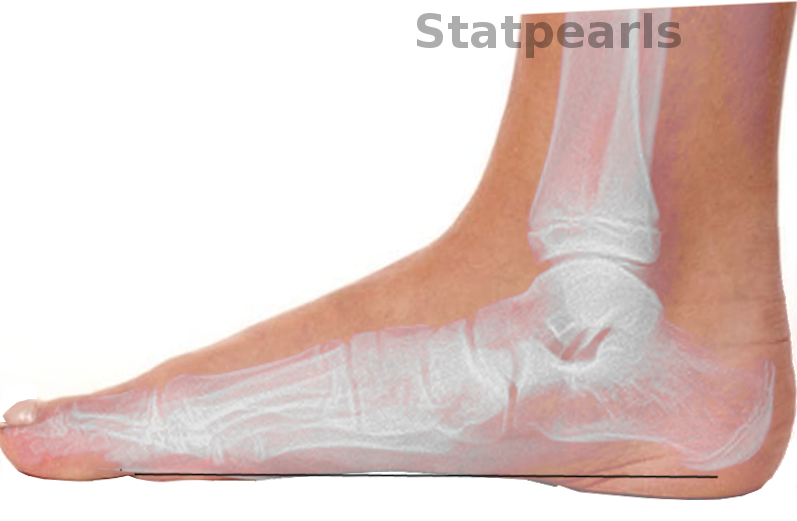 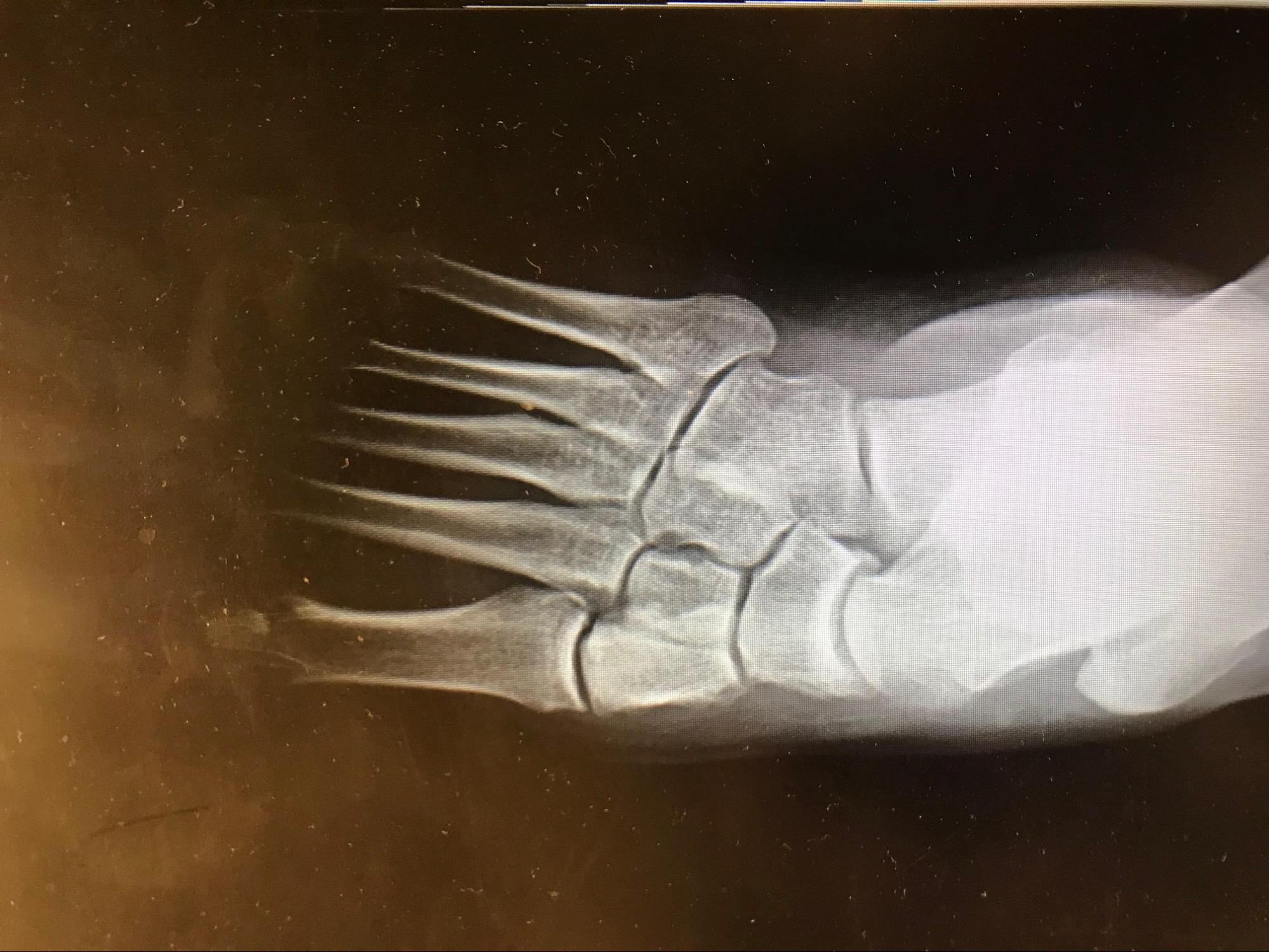 Kohls-Gatzoulis J,Woods B,Angel JC,Singh D, The prevalence of symptomatic posterior tibialis tendon dysfunction in women over the age of 40 in England. Foot and ankle surgery : official journal of the European Society of Foot and Ankle Surgeons. 2009;     [PubMed PMID: 19410173]