The fetal circulation system is distinctly different from adult circulation. This intricate system allows the fetus to receive oxygenated blood and nutrients from the placenta. It is comprised of the blood vessels in the placenta and the umbilical cord, which contains two umbilical arteries and one umbilical vein. Fetal circulation bypasses the lungs via a shunt known as the ductus arteriosus; the liver is also bypassed via the ductus venosus and blood can travel from the right atrium to the left atrium via the foramen ovale. Normal fetal heart rate is between 110 and 160 peats per minute. When compared to adults, fetuses have decreased ventricular filling and reduced contractility.[1] Fetal circulation undergoes a rapid transition after birth to accommodate extra-uterine life.  Human understanding of fetal circulation originated from fetal sheep but ultrasound and magnetic resonance imaging (MRI) during the fetal period now provide detailed information.[2] There are distinct differences in the fetal circulation that if not appropriately formed can lead to childhood or adult diseases.

With advancing medical technology babies are viable at earlier weeks of gestation than ever before — immature hearts transitioning to newborn circulation has-life long effects. Adults, born preterm, were studied and found to have increased cardiac muscle mass, reduced chamber length, and impaired function. These impairments are more profound in those born profoundly premature; they were found to have 50% more ventricular cardiac muscle mass than those born at term. These patients are at increased risk of ischemic heart disease and heart failure.[1]  Another area of concern is when certain shunts fail to close after birth, the baby can be born with congenital heart defects that present with varying signs and symptoms. This is discussed further below.

The yolk sac initiates erythropoiesis until the liver can take over at 5 weeks gestation and then the bone marrow finally contributes at 6 months gestation. The relative hypoxia, when compared to the mother, activates hypoxia-inducible factor-1 to stimulate erythropoietin production in the kidneys, which improves the capacity of fetal blood for oxygen. Fetal hemoglobin also possesses a higher affinity for oxygen when compared to maternal hemoglobin. However, fetal tissue has adapted ways to unload the oxygen from the higher affinity hemoglobin when in the fetal tissue by creating an acidic environment. By the age of 4 to 6 months, the baby will have an adult level of hemoglobin and will have no fetal hemoglobin. After birth, erythropoiesis will also slow.[2][3][4]

The fetal heart initiates at 22 days; this indicates the initiation of fetal circulation. Gas exchange initially takes place in the yolk sac until the placenta entirely takes over. This transition occurs around 10 weeks gestation. Maternal oxygenated blood mixes with placental blood which is low in oxygen before heading out to the fetus. Due to this mixing, the fetus is relatively hypoxic when compared to maternal, arterial blood.[2]

As the baby is born, the cardiovascular system undergoes a quick, drastic change. With its first breath, the baby's pulmonary vascular resistance substantially drops, which is in response to the oxygen now present in the lungs and the physical act of breathing. With the clamping of the umbilical cord after birth, the systemic vascular resistance increases helping the blood flow towards the lungs. The ductus arteriosus has a left-to-right flow within 10 minutes. The smooth muscle in the ductus arteriosus responds to the oxygen by increasing calcium channel activity causing constriction and ultimately shunt closure. The increased systemic resistance also raises the pressure in the left atrium to be higher than the right atrium, and this causes the foramen ovale to close.[2]

The mother's uterus fosters the environment for fetal growth and placental vitality. Every organ system is involved in the process of fetal circulation because as the fetus grows and develops it needs oxygen and nutrients that the blood supplies. The fetal blood will reach every aspect of the growing fetus except for the liver and lungs which are bypassed. However, the fetal arterial system will receive waste products that originated from those organs.

The fetal circulatory system provides the fetus with nutrients and oxygen, while also removing waste products and carbon dioxide from fetal circulation.

Tests to detect congenital heart defects can be completed during pregnancy. A fetal echocardiogram can visualize the fetal heart as early as 16 weeks of pregnancy. Some defects only manifest following birth. In these cases, evaluation consists of a thorough history and physical examination, an echocardiogram, and potentially a cardiac catheterization. Near-infrared spectroscopy (NIRS) is a tool to noninvasively measure oxygenation of fetal tissues which physicians can then calculate blood flow and oxygen delivery.[2] Other tests can be conducted depending on the presenting signs and symptoms.

In tetralogy of Fallot, a boot-shaped heart due to right ventricular hypertrophy may be present on chest x-ray.

Rib notching may present on chest x-ray in patients with coarctation of the aorta, because of the intercostal arteries enlarging as the patient grows older.

An echocardiogram will show any structural or valve abnormalities in the fetal or newborn heart.

In fetal circulation, the right side of the heart has higher pressures than the left side of the heart. This pressure difference allows the shunts to remain open. In postnatal circulation, when the baby takes its first breath, pulmonary resistance decreases and blood flow through the placenta ceases. Blood commences flowing through the lungs, and the pressure in the left side becomes higher than the right. As a result, the shunts mentioned above close.

Congenital heart defects arise when shunts fail to close after birth. Abnormalities in the anatomy of the heart can also alter the proper flow of blood. These defects can be cyanotic or acyanotic. Cyanotic heart defects are typically from right-to-left shunts in blood after birth. With deoxygenated blood bypassing the lungs and entering systemic circulation, the baby can appear blue at birth. Examples of cyanotic heart defects are tetralogy of Fallot (TOF), transposition of the great arteries (TGA), persistent truncus arteriosus, tricuspid atresia, and total anomalous pulmonary venous return (TAPVR). Acyanotic heart defects are typically left-to-right shunts in blood after birth. Because the left side contains oxygenated blood, there is no deoxygenated blood entering the systemic circulation. Instead, some oxygenated blood goes to the right side of the heart and travels through the lungs again. As a result, the baby does not initially appear blue at birth. Examples of acyanotic heart defects are atrial septal defect (ASD), ventricular septal defect (VSD), patent ductus arteriosus (PDA), and patent foramen ovale (PFO). However, the shunt can reverse later in life if the left-to-right shunt goes uncorrected. With the left-to-right shunt, there can be a severe overload of the right heart due to an increase in blood flow, causing an increase in pulmonary vascular resistance, which causes pulmonary hypertension. Eventually, the right ventricle hypertrophies and the pressure on the right side of the heart becomes more significant than the left side. As a result, the shunt reverses and becomes right-to-left. Deoxygenated blood starts entering systemic circulation, and the baby can present with cyanosis. This switching of flow from left-to-right to right-to-left is known as Eisenmenger syndrome.

Conotruncal septal defects are accountable for persistent truncus arteriosus, TGA, and TOF. In persistent truncus arteriosus, a single arterial trunk originates from both the right ventricle and left ventricle. It is not able to divide into the aorta and pulmonary artery distally. Because of a failure of neural crest cell migration, the conotruncal ridges are not able to form, resulting in this defect, which results in the deoxygenated blood from the right ventricle mixing with the oxygenated blood from the left ventricle, causing cyanosis. In TGA, the aorta and pulmonary artery switch locations. The aorta, in this case, originates from the right ventricle, and the pulmonary artery arises from the left ventricle. As a result, there are two independent circuits of blood that do not mix due to the conotruncal septum failing to spiral during development. Deoxygenated blood returns to the right side of the heart and then travels through the aorta and goes out to the body.

On the other hand, oxygenated blood returns to the left side of the heart from the lungs and then travels through the pulmonary artery to go back to the lungs. A shunt is needed for survival in this case due to the lack of oxygenated blood being delivered to the body. In TOF, there is an anterior displacement of the conotruncal septum. It is characterized by pulmonary stenosis, a VSD, an overriding aorta, and hypertrophy of the right ventricle. The pulmonary stenosis forces the deoxygenated blood to travel through the VSD from the right side to the left side and leads to right ventricular hypertrophy. Because of the deoxygenated blood crossing over into systemic circulation, the baby presents with early cyanosis.

The clinical presentation of babies with ASD is related to the size of the hole. Patients are often asymptomatic and are only detected when hearing a murmur. However, a patient with a large ASD could present with heart failure, failure to thrive, or recurrent lung infections. The murmur associated with ASD is a fixed splitting of S2, due to A2 occurring before P2, which is due to the increase in right atrial and right ventricular volumes, which ultimately increase flow through the pulmonic valve, delaying closure.[6][7][8]

The clinical presentation of babies with VSD is also dependent on the size of the defect. Small VSDs are often asymptomatic. Larger VSDs with significant left-to-right shunting may cause failure to thrive and congestive heart failure because the heart is not able to pump enough blood to meet the body’s demand. A holosystolic murmur auscultated at the left lower sternal border.

On physical examination of babies born with PDA, patients have a continuous machine-like murmur, loudest at S2. It is best auscultated in the left infraclavicular area and associated with congenital rubella or prematurity.

In TOF, a child commonly presents with “tet spells.” These spells mean that cyanosis may develop when a child is agitated. Upon physical exam, the patient will have a blue tint to their lips and around their mouth, their skin will be damp or warm, and breathing will be rapid.[9]

In TOF, squatting may improve symptoms. Squatting kinks the femoral arteries, increasing systemic vascular resistance. As a result, the pressure of the left heart is greater than the pressure of the right heart, which reverses the shunt. However, early surgical correction is the recommendation. 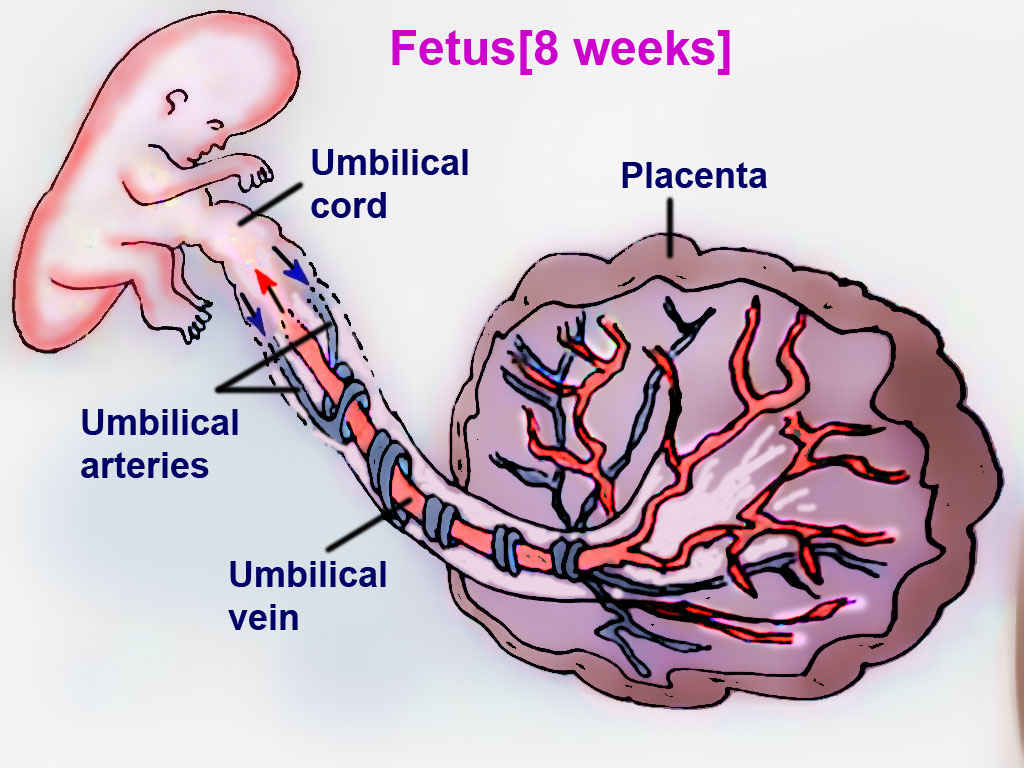 Finnemore A,Groves A, Physiology of the fetal and transitional circulation. Seminars in fetal     [PubMed PMID: 25921445]