The facial muscles are striated muscles that attach to the bones of the skull to perform important functions for daily life, including mastication and facial expressions. These muscles are located medially to the ears, superior to the mandible, and inferior to the coronal suture of the skull. Deficits in these muscles can lead to significant impairment of daily function.

The facial muscles of the splanchnocranium act in synchrony. For example, during chewing, the perioral facial muscles are activated at the same time as the orbicularis oris. Depending on the chewing (right or left or central) and the chewed object, change the intervention pattern of the muscles of the entire face, from the superficial muscles to the deep muscles. To emphasize this concept and take another example, there is a close fascial relationship between the temporalis muscle and the buccinator muscle. The inferior muscle fibers of the buccinator arise from the anterior portion of the deep tendon of the temporalis. The two muscles work to improve their functions, from chewing to the opening and movement of the jaw to speech.

The facial muscles serve 2 major functions for the body: mastication and facial expressions. The muscles of mastication include the temporalis, medial pterygoid, lateral pterygoid, and the masseter (buccinator muscle is an important accessory of chewing). Another important function is facial expression. The majority of the facial muscles contribute to exhibiting expressions. These muscles include the orbicularis oculi, nasalis, levator labii superioris alaeque nasi, depressor labii inferioris, procerus, auriculars, zygomaticus major, zygomaticus minor, buccinator, occipitofrontalis, corrugator supercilii, risorius, depressor anguli oris, orbicularis oris, and mentalis. The orbicularis oculi are responsible for blinking the eye or closing of the eyelid. The nasalis and labii superioris alaeque nasi function by elevating the sides of the nose or “snarling.” The depressor labii inferioris depresses the nose. The procerus and corrugator supercilii muscles attach to the frontalis muscle between the eyebrows and functions in crinkling the eyebrows together. The auriculars function in moving the ears anteriorly and posteriorly from the face. The zygomaticus major and minor run over the zygomatic bone and function in helping to smile by pulling the muscles upward. The risorius muscles are found at the edges of the mouth and also function in smiling. The buccinator allows an individual to chew without biting the cheeks and to blow air outward. The occipitofrontalis, with 2 communicating bellies, acts to raise the eyebrows on the face. The depressor anguli fibers function in depressing the sides of the mouth during frowning—the orbicularis oris functions in pursing the upper and lower lips. The mentalis muscle is a primary muscle of the lower lip and function in lowering the inferior lip.

The superficial facial muscles affect the health of the skin and mucous membranes. Facial muscles can influence distant anatomical areas. For example, the occipitofrontalis muscle has an anatomical continuity with the eyelid elevator and the Tenon capsule, anteriorly, and a posterior continuity with the sub-occipital muscles. From a clinical point of view, an abnormal tension of this myofascial continuum could negatively affect the neck's position, the relationship between the gaze and the posture of the head.

The facial muscles intervene in the speech and strongly affect the social relationship through facial expression.

The innervation for the facial muscles is from 2 major nerves. The facial nerve, or cranial nerve VII, serves as the main motor component. The facial nerve arises from beneath the parotid gland and radiates across the face. The facial nerve innervates the muscles of expression, allowing a person to move their face accordingly. The trigeminal nerve, or cranial nerve V, serves as the sensory component of the face and scalp. Cranial nerve V has 3 major branches that supply different regions of the face. The ophthalmic branch, or V1, supplies the forehead region and exits the skull superiorly to the orbits. The maxillary branch, or V2, innervates the maxilla bone region inferior to the orbit. The mandibular branch, or V3, supplies innervation to the mandible bone region inferior to the nose. This V3 branch can contribute to both sensory and motor innervation of the face. The motor component of V3 innervates the muscles of mastication. All three branches of the trigeminal nerve provide general somatic afferent fibers that contribute to the sensory innervation of the face. Cervical spinal nerves contribute to the cutaneous sensation of the face as well, but the trigeminal nerve is the main innervation.

The muscles of the face have different characteristics compared to the skeletal musculature, limbs, and trunk. The face has muscles with a more complex pattern of innervation of extrafusal fibers; they have a larger percentage of slow type fiber. These muscles possess round or elongated Ruffini-like corpuscles, which structures are a resource for proprioception functions: different morphology but similar function, compared to the skeletal muscles of the rest of the body.

The facial artery can be physiologically variant is individuals. This is important for surgical applications to the supplied area.

The facial nerve can be surgically repaired if damaged via cable grafting or primary nerve repair. Primary nerve repair usually provides the best outcome for repair and involves decreasing the tension around the anastomoses. However, the damaged nerve can only be electrically stimulated within 72 hours of injury, so early initiation of correction is imperative.

Bell’s palsy (BP) is a condition in which the unilateral face appears to “droop,” while the other side of the face is normal in both appearance and function. This is caused by a deficit in the facial nerve or cranial nerve VII.  BP is the most common acute mononeuropathy and the most common diagnosis associated with facial nerve paresis (i.e., weakness) or paralysis (i.e., complete motor loss).  The 2013 clinical practice guideline committee made the following (strong) recommendations for the management of BP [1][2][3][4]:

Trigeminal neuralgia is the sensation of pain from a mild stimulus, such as brushing one’s teeth, caused by contact between a vessel and the trigeminal nerve. It is more common in women than in men. Another clinical correlation is using local anesthetics to block the inferior alveolar nerve to perform dental procedures. The inferior alveolar nerve is a branch of V3 of the trigeminal nerve and runs along the bottom teeth.[5][6]

Patients with idiopathic paralysis of the facial muscles can benefit from a physiotherapy process, including electrostimulation, the use of tape, manual manipulation and stretching, proprioception exercises, and specific cognitive stimulation of each muscle by the patient.[7][8][9] 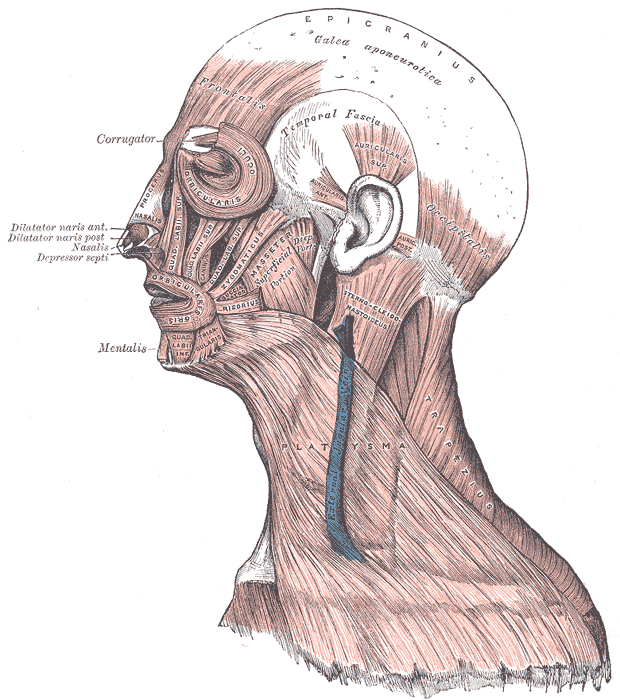 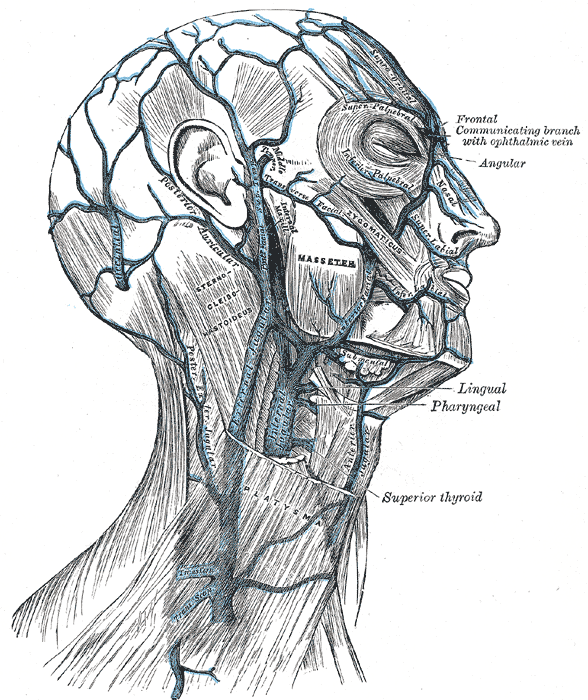 Veins of the Neck Head and Face and their Branches; External and Internal Jugular Vein
Contributed by Gray's Anatomy Plates