The extrapyramidal system (EPS) is an anatomical concept first developed by Johann Prus in 1898 when he discovered that the disturbance in pyramidal tracts failed to prevent epileptic motor activity. Prus postulated that, apart from pyramidal tracts, there must be alternative pathways, called the "extrapyramidal tracts," that "delivered epileptic activity" from the cerebral cortex to the spinal cord.[1][2] Clinically, the term "extrapyramidal" was thus adopted to distinguish between the clinical effects produced by damage involving the basal ganglia and those of damage to the classic "pyramidal" pathway. Despite this distinction, however, the two systems have important anatomical and functional relationships.

The EPS serves an essential function in maintaining posture and regulating involuntary motor functions. In particular, the EPS provides:

The EPS, therefore, controls the automatic activities but also influences voluntary motility through a tonic function. These regulation mechanisms involve the processing of centers located in multiple brain regions, such as parts of the cerebral cortex, the cerebellum, the thalamus, the reticular substance, and several basal ganglia. The term basal ganglia or basal nuclei refers to a group of subcortical nuclei. Among these nuclei, the caudate nucleus and the putamen nuclei, which together constitute the neostriatum, plus the substantia nigra (SN), red nucleus (RN), and the subthalamic nucleus of Luys compose the nuclei of the EPS. From all these centers, numerous subcortical tracts, or the extrapyramidal tracts, stem out and terminate in the spinal cord. However, the majority of tracts travel through the basal ganglia. Thus, anatomically, the EPS can be defined as a set of nuclei and fiber tracts that receive projections from the cerebral cortex and send projections to the brainstem and spinal cord and, functionally, works as a complex motor-modulation system.

Alterations affecting the various circuits play a crucial role in the pathogenesis of extrapyramidal motor disorders. Classic examples of injury to the EPS are Parkinson disease (PD), Huntington chorea (HC) caused by degenerative processes in the striatum, Sydenham chorea, multiple systemic atrophy (MSA), and progressive supranuclear palsy. In 1995, the World Health Organization's International Classification of Diseases released a classification for extrapyramidal and movement disorders. This chapter encompasses PD, secondary parkinsonism, other degenerative diseases of the basal ganglia, and several clinical conditions featuring dystonia, dyskinesia, and tremors (e.g., essential tremor). The clinical aspects of these clinical conditions are manifold and are not only the effect of alterations of voluntary movements. Because EPS probably establishes connections with the motor cortex by regulating the process of movement from the first ideational stages, voluntary movement can also become impaired in extrapyramidal pathology. For instance, slowing of voluntary movements such as walking is usually observed.

Moreover, the alterations that lead to these extrapyramidal pathologies mainly concern neurodegenerative processes. Thus, depending on the specific disease, the main symptoms are alterations of involuntary movements such as tremors, spasms, impairment of voluntary movements as well as a decline in cognitive functions involving mainly memory tasks, and affective sphere disorders such as depression. Postural alterations are also detected. For instance, the so-called Pisa syndrome, which is an abnormal posture in which the body appears to be leaning to one side like the Tower of Pisa, is an atypical feature of MSA. Finally, autonomic alterations and several non-motor symptoms, such as pain, can be part of the clinical picture of these pathologies.

The EPS is polysynaptic in nature. It is composed of several tracts and nuclei. The tracts include reticulospinal, vestibulospinal, rubrospinal, and tectospinal tracts.[3]

The medial vestibulospinal tract originates in the medial vestibular nuclei, or Schwalbe's nucleus, in the medulla and terminates in the limb motor neurons. They are responsible for innervating upper-body musculature, especially muscles of the neck and forelimbs. The lateral vestibulospinal tract originates in the lateral vestibular nuclei, or Deiter's nucleus of the pons, and ipsilaterally courses down to the Rexed's laminae VII and VIII. These laminae contain premotor interneurons and other alpha and gamma motor neurons that are responsible for innervating the extensor muscles that oppose gravity as well as inhibiting the flexor muscles. The vestibulospinal tract plays a crucial role in maintaining an erect posture.[6][7]

The rubrospinal tract originates from the red nucleus of the midbrain tegmentum and crosses the midline in ventral tegmental decussation located in the caudal midbrain. The tract forms a contralateral tract in the dorsolateral part of the lateral funiculus and lies in the ventrolateral part of the spinal cord. The rubrospinal tract mainly transmits signals into the red nucleus from the motor cortex and cerebellum to the spinal cord and ventral horn lamina V, VI, and VII.[8] In these laminae, the rubrospinal tract synapses with alpha and gamma motor neurons that stimulate the flexor muscles. The importance of the tract lies in the maintenance of muscle tone and in the regulation of rudimentary motor skills that are refined by corticospinal control.[9] With the corticospinal tract, the rubrospinal tract controls hand and finger movements in addition to flexor muscles.

The tectospinal tract originates from the superior colliculus of the midbrain and receives stimulation from the retina and cortical visual association areas, courses ventromedial to the periaqueductal gray (PAG) matter, and terminates in the contralateral anterior gray horn lamina VI, VII, and VIII of cervical and upper thoracic segments of the spinal cord. It serves a critical function in the orientation of the head, neck, eyes, and upper extremities in response to sudden movement, loud noises, and bright lights.[10][11]

The central nervous system (CNS) derives from a subspecialized ectoderm called the neuroectoderm. Over two to eight weeks of embryological development, notochord causes the evolution of the neural plate. The neural plate eventually differentiates into the neural tube via neurulation, which eventually forms the central nervous system. The brain forms from the cranial two-thirds, and the spinal cord forms from the caudal one-third of the neural tube.[12]

Blood Supply to the Brain

Blood Supply to the Spinal Cord

A large number of causes can induce syndromes and clinical manifestations of extrapyramidal damage. Most of the EPS alterations have a degenerative cause. A genetic component underlies some disorders, while injury processes, and those due to perfusive damage, are also possible. Extrapyramidal syndromes can also be associated with drugs such as antipsychotic drugs and reserpine, as well as toxic substances such as carbon monoxide, cyanide, and paraquat, 1-methyl-4-phenyl-1,2,3,6-tetrahydropyridine (MPTP). Manganese can occupationally induce secondary parkinsonism through serious neurotoxicity involving the basal ganglia.[13][14]

The alterations of the extrapyramidal system can be grouped into hypokinesias and hyperkinesias.

Unlike pyramidal pathology, extrapyramidal involvement does not lead to paralysis but instead to scarcity or absence of movements which are termed hypokinesia and akinesia, respectively. Both conditions can express voluntary and involuntary movements. Several voluntary acts, such as walking, writing, and speaking, will slow down. Concerning involuntary movements, a reduction, or loss, of the associated movements of pendulation of the upper limbs during walking or mimic and expressive movements can be observed. Furthermore, slowness in the execution of voluntary movements, especially at the beginning of the movement or when this is about to complete, can be present. This condition is termed bradykinesia.

These concern abnormal involuntary movements that can present in extrapyramidal diseases. These movements become distinguished by:

In extrapyramidal diseases, signs and symptoms of a non-motor nature can occur. For example, disturbances of attention, slowed or monotonous ideation, and poor control of emotion and instincts are such findings.

This syndrome is characterized by muscle hypertonia, bradykinesia, and sometimes by tremor (hypertonic-hypokinetic syndrome) and is mainly observed in PD. In particular, PD is characterized by generalized extrapyramidal hypertonia, static tremor, and akinesia. The hypertonia is mainly observed at the root of the limbs, is permanent, and is accompanied by an exaggeration of postural reflexes. For example, flexing the hand on the forearm remains for a few moments in this position before reverting. The static tremor predominates in the upper limbs; moreover, it is wide and regular. Akinesia is a loss of the ability to move muscles voluntarily. A typical sign of akinesia is 'freezing.' The patient loses automatic and associated movements, with difficulty regaining balance, and they walk with the center of gravity moved forward or in a stooped posture. Non-motor symptoms such as pain are usually essential features of the disease and can also precede motor disorders.[15][16]

Bilateral Injuries At The Brainstem Level

In addition to quadriplegia, two fundamental pictures of hypertonia can be observed, depending on the level of injury: decerebrate rigidity and decorticate rigidity. The EPS plays a key role in both phenomena.

Decerebrate rigidity occurs when an injury at the superior border of the pons disconnects the posterior aspect of the brainstem and the spinal cord from the rest of the brain. With the transection, stroke, or hemorrhage of the brainstem regions, the lateral ventrospinal tract and the reticulospinal tract over-activate extensor motor neurons with restricted inhibition of the cortex and basal ganglia. This, in turn, causes increased activity of alpha motor neurons and gamma motor neuron discharges.[7] As a result, the injury causes the extensor muscles of all limbs and muscles of the neck and trunk to have increased tone (i.e., the extension of elbows in addition to the extension and internal rotation of all extremities). 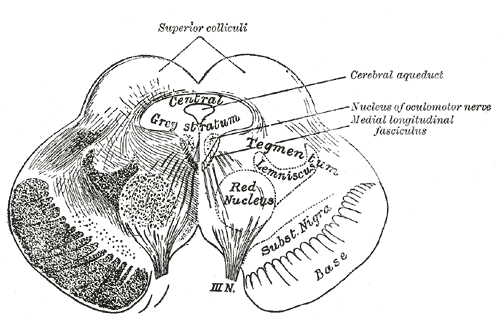 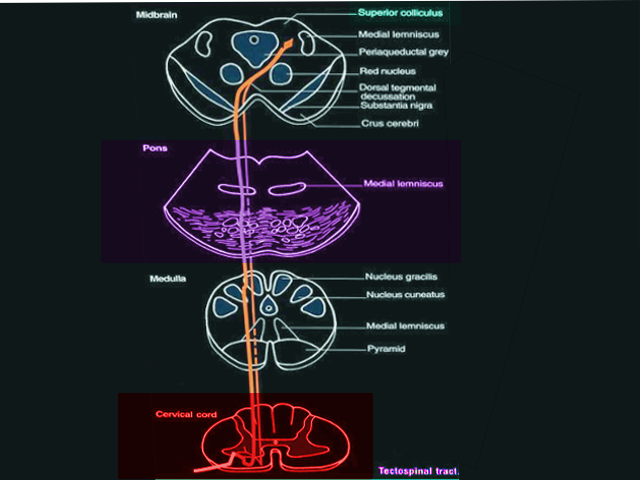 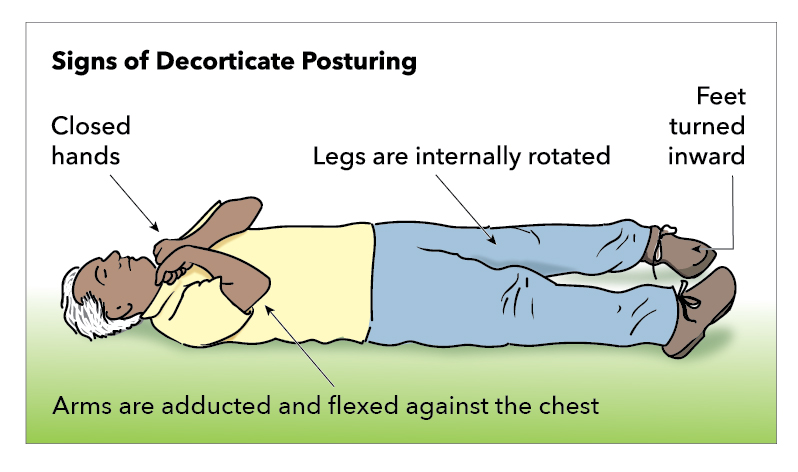 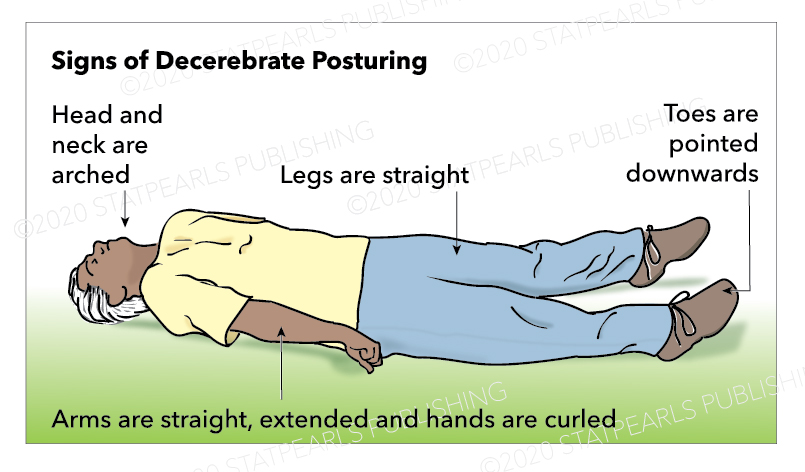 de Oliveira-Souza R,Tovar-Moll F, The unbearable lightness of the extrapyramidal system. Journal of the history of the neurosciences. 2012 Jul;     [PubMed PMID: 22724489]

Gulunay A,Cakmakli GY,Yon MI,Ulusoy EK,Karakoc M, Frequency of non-motor symptoms and their impact on the quality of life in patients with Parkinson's disease: a prospective descriptive case series. Psychogeriatrics : the official journal of the Japanese Psychogeriatric Society. 2020 Mar     [PubMed PMID: 31782214]