The principal function of the extensor hallucis longus is to extend the hallux and dorsiflex the foot at the ankle. Due to its origination on the fibula—the lateral bone of the anterior leg—and insertion on the tendon of the distal phalanx of the hallux, muscle contraction lifts the foot and the big toe upward toward the shin (dorsiflexion). This movement is critical to gait because it allows clearance of the foot off the ground during the swing phase. Consequently, damage or loss to the muscles or deep peroneal nerve, the innervation of the anterior compartment, can result in foot drop—loss of dorsiflexion—and a characteristic high-stepping gait.[3]

In addition to extending the hallux and dorsiflexing the foot at the ankle, the extensor hallucis longus has a role in weakly inverting the foot due to its insertion on the distal phalanx of the hallux—the most medial toe. Consequently, loss of the extensor hallucis longus can also result in weakness in foot inversion, although typically not clinically significant due to the strong action of the tibialis anterior in inverting the foot.

Several factors influence the formation of the limb bud musculature, including retinoic acid, sonic hedgehog (SHH), HOX genes, apical ectodermal ridge (AER), and the zone of polarizing activity (ZPA). Retinoic acid is a global organizing gradient that initiates the production of transcription factors that specify regional differentiation and limb polarization. The apical ectodermal ridge (AER) produces fibroblast growth factor (Fgf), promoting the outgrowth of the limb buds by stimulating mitosis.[4][5][6]  The specific fibroblast growth factor involved in hindlimb development is Fgf10, which gets stimulated by Tbx4.[7] SHH is produced by the zone of polarizing activity (ZPA), which promotes the organization of the limb bud along the anterior-posterior axis. SHH activates specific HOX genes – Hoxd-9, Hoxd-10, Hoxd-11, Hoxd-12, Hoxd-13 – which are important in limb polarization and regional specification.[4][5][6] These genes control patterning and, consequently, the morphology of the developing limb in the human embryo.[7] Errors in Hox gene expression can lead to malformations in the limbs.[7]

The lymphatic vessels of the lower limb divide into two major groups—superficial and deep vessels. The lower limb's superficial lymph vessels further subdivide into two groups: a medial group, which follows the greater saphenous vein, and a lateral group, which follows the small saphenous vein. There are also deep lymph vessels, including the anterior tibial, posterior tibial, and peroneal vessels, that follow the course of the corresponding arteries and veins. The lymph vessels of the lower limb drain into the popliteal, superficial inguinal, deep inguinal, external iliac, and lumbar or aortic lymph nodes.

The extensor hallucis longus muscle inserts into the dorsum of the base of the distal phalanx of the big toe. However, several variants exist that may possess one or more accessory tendinous slips that insert into other neighboring bones or tendons. These physiologic variants are clinically significant because the extensor hallucis longus muscle can be used in tendon transfer surgeries to correct conditions such as hallux varus, talipes equinovarus, and clawed hallux associated with a cavus foot.[8] The three most common insertion patterns are as follows[9]:

Knowledge of the extensor hallucis variants is crucial for radiologists and surgeons to prevent adverse surgical events in tendon transfer surgeries.

The extensor hallucis longus is important in the dorsiflexion of the foot at the ankle and extension of the big toe. For this reason, it is tested during the physical exam to assess the range of motion and motor strength of the ankle and big toe. Weakened or absent motor strength can indicate muscle or nerve damage to the extensor hallucis longus and muscles of the anterior compartment of the leg or weakness from the L5 nerve root.

Another common injury to the anterior compartment of the lower leg is injury or damage to the deep peroneal nerve. In this case, the patient would present with an inability to dorsiflex the foot at the ankle and extend the toes. Injury to the deep peroneal nerve can severely impact gait resulting in a characteristic high stepping gait to compensate for the foot drop. 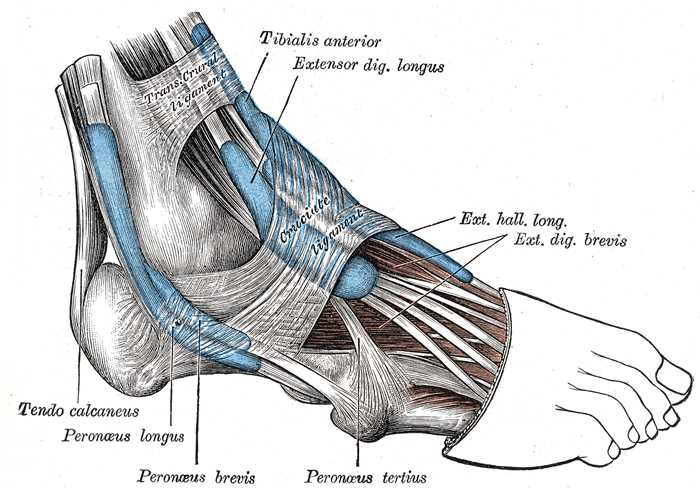