The epidermis is the outermost layer of skin. Its proper development during the fetal period is crucial as a barrier against infections and water loss.[1][2][3]

The epidermis begins developing from the surface ectoderm at the end of the fourth week of life as the neural tube separates from the overlying ectoderm to mark the completion of neurulation. Although after the first few weeks of embryogenesis, the epidermis is composed of five strata or layers. During the first few weeks, it is composed solely of a basal layer of cuboidal cells lying atop mesenchyme or future dermis. By the fifth week, a secondary layer of squamous, non-keratinizing, cuboidal cells, known as periderm or epitrichium, develops atop the basal layer. By cycling through phases of keratinization and desquamation, the periderm generates a white, waxy substance called vernix caseosa (cheesy varnish), which serves to protect the fetus from amniotic fluid and, as it later exits the birth canal, from bacterial and environmental insults.

The basal layer develops into the stratum germinativum, proliferating to form a multilayered intermediate zone by the 11th week. By the 20th week, the stratum germinativum begins proliferation and differentiation to form four more superficial strata of the epidermis: spinosum (spinous), granulosum, lucidum (clear, extra fifth layer seen only in the skin of palms and soles), and corneum (horny). Proliferation between weeks 12 to 14 forms epidermal ridges that protrude as troughs into the developing dermis beneath. Deep in the epidermis, lateral plate-derived mesenchymal cells proliferate to form dermis, filling the space between the epidermal ridges with dermal papillae. Neurovascular supply within the papillae is complete by the end of the first trimester. Between the ninth and 12th weeks, some of the stratum germinativum also differentiates into the first appearance of hair follicles. By the twelfth week, lanugo (fine, soft, unpigmented hair) is visible on the eyebrows, upper lip, and chin. By the seventeenth week, lanugo is substantial and aids in the adherence of the vernix caseosa to the skin. As melanocytes migrate in greater numbers within the epidermis, they also provide pigment to hair bulbs. Ultraviolet light first encountered at birth results in increased amounts of melanin production.

Nails begin development in the ten weeks, when the epidermis at the tips of the digits first thickens, migrates dorsally, and finally keratinizes while growing toward the distal end of the nail plate. This process is complete by the 32nd weeks in the fingers and by the 36th week in the toes.

As the epidermis develops in the first four months, some neural crest cells migrate superficially to become melanocytes, interposed within the epidermal strata. The theoretical paths of dorsal melanocytes, migrating laterally from the midline but stretched by the flexed fetus, is one potential basis for lines of normal cell development called Blaschko's lines. The lines appear V-shaped on the back, S-shaped on the chest, hourglass-shaped on the face, and swirled on the scalp. Certain autosomal and X-linked inherited skin conditions affect keratinocytes and melanocytes, such as epidermal naevus, hypomelanosis of Ito, incontinent pigmenti, and also acquired conditions such as lichen striatus, linear morphea tend to follow a Blaschkoid distribution as a visible manifestation of genetic mosaicism. In women, some X-linked disorders follow a Blaschkoid distribution due to normal X-inactivation (lyonization), resulting in functional cutaneous mosaicism; one example is X-linked hypohidrotic ectodermal dysplasia. Interestingly, the implicated gene in X-linked ichthyosis, which encodes steroid sulfatase, is known to "escape" X-inactivation and therefore does not follow Blaschko's lines. The genetic pathways for melanocyte migration and development are complex processes facilitated by several genes such as MITF,c-KIT, Snail/Slug, protooncogenes such as BRAF, and NRAS tumor suppressor genes such as CDKN2A, and endothelins like EDNRB. All of these genes carry implications in the pathogenesis of Malignant Melanoma. Out of these, mutations in BRAF and NRAS are present in nearly 65% and 20% of melanomas, respectively.[4] Certain pigmentary disorders, such as Piebaldism, where leukoderma and a central forelock of white depigmented hair are vital features, involve a mutation in the c-KIT gene.[5][6][7][8]

On the soles of the palms and feet, the surface changes resulting from the formation of epidermal ridges are the basis for fingerprints and are determined genetically. Certain genetic diseases, such as Down syndrome, often affect ridge pattern formation, resulting in distinctive phenotypes like the presence of a transverse palmar crease (simian crease), which can aid in diagnosis.

Several subtypes of ectodermal dysplasia appear to result from mutations in p63 of the p53 family of transcription factors, which is first expressed at week 8.5 of embryogenesis and appears to play a key role in epidermal stratification. It is thought to exert its effects via maintenance of the epidermal stem cell population and basal layer. Homozygous knockout mice for the p63 gene are born with a single-cell-thick layer of skin rather than a recognizable epidermis, and consequently, they expire secondary to dehydration. The phenotype was similar enough to subtypes of congenital ectodermal dysplasia that researchers sought a connection. Indeed, there is a subgroup of ectodermal dysplasia, which links to p63 mutations. These include Hay-Wells syndrome and ectodermal dysplasia-ectodactyly clefting syndrome, inherited in an autosomal dominant fashion and are principally characterized by ectodermal dysplasia, orofacial clefting, and limb malformations.[9]

The embryonic growth and patterning of epidermal stem cells, hair follicles, and sebaceous glands are under partial regulation by the molecular signals of the Hedgehog pathways, including the sonic hedgehog (Shh), Indian hedgehog (Ihh), and Desert hedgehog (Dhh) pathways. These pathways are most active during embryogenesis, but they also play a role in postnatal hair follicle growth and epidermal stem cell replenishment. As basal cell carcinoma appears to arise from immature pluripotential cells associated with the hair follicle, it is not surprising that most sporadic basal cell carcinomas contain mutations in the Hedgehog pathways. Inactivating mutations in PATCHED (PTCH), a tumor suppressor in the Shh pathway, are most common. Another 10-20% is caused by activating mutations of smoothened (Smo), the protooncogene, which PTCH normally represses. Additionally, nevoid basal cell carcinoma syndrome (NBBCS, Gorlin syndrome) is characterized by the development of extracutaneous tumors, skeletal and dermatologic anomalies, and dozens to hundreds of BCCs by early adulthood is nearly always caused by PTCH mutations. Orally active small-molecule inhibitors of the Shh pathway, such as Vismodegib and Sonidegib, have demonstrated clinical efficacy in treating locally advanced or metastatic basal cell carcinoma and NBCCS.[10][11] 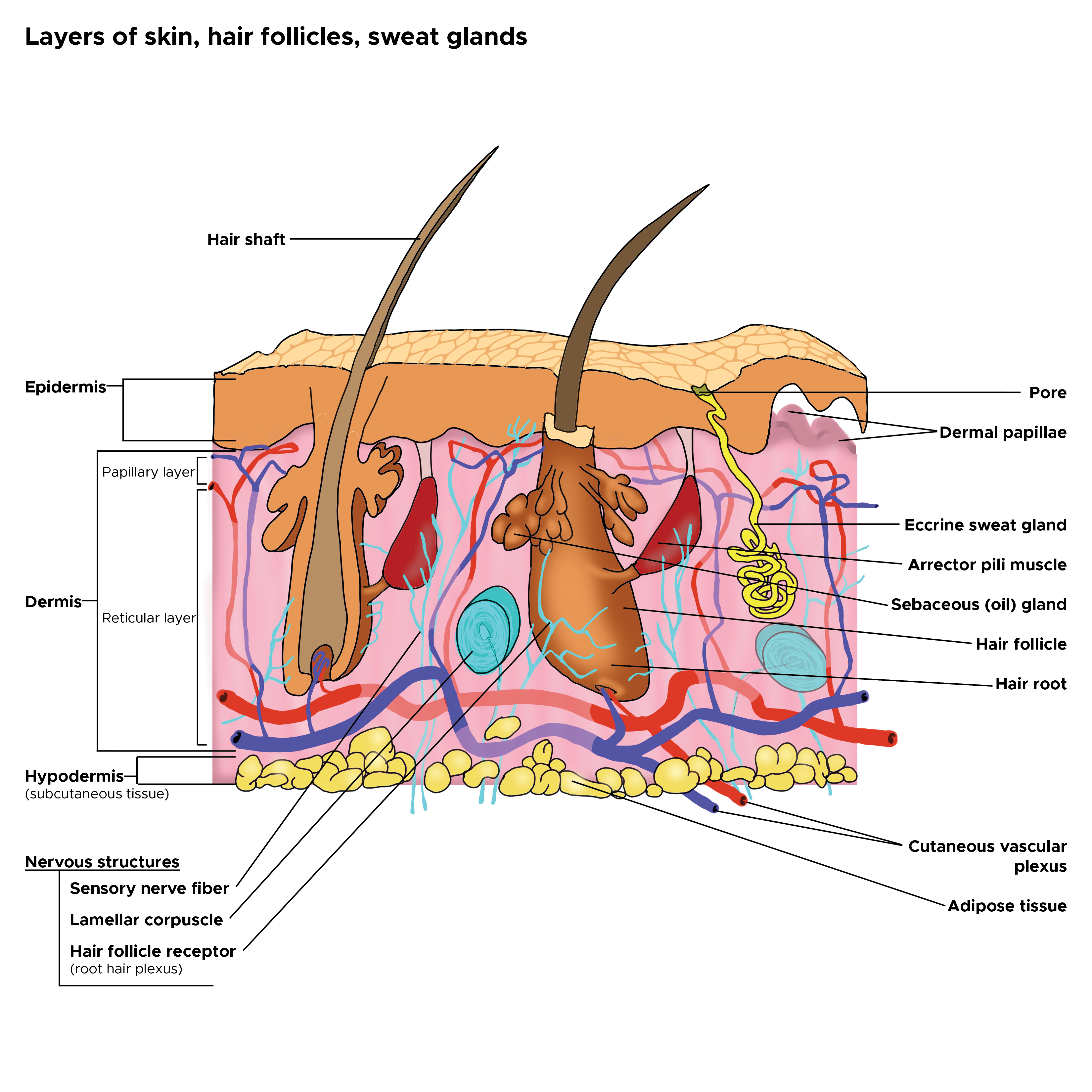