Empyema of the gallbladder is the most severe complication of acute cholecystitis. It is usually the result of the progression of acute cholecystitis in a background of bile stasis and cystic duct obstruction. This is a surgical emergency that requires prompt treatment with antibiotics and urgent aspiration/removal of the gallbladder to reduce the risk of septic shock. This activity describes the evaluation, diagnosis, and management of gallbladder empyemas and stresses the role of team-based interprofessional care for affected patients.

Empyema of the gallbladder is estimated to occur in 5 to 15% of cases diagnosed to have acute cholecystitis. It is noted to be the more morbid condition when occurring in the older age group. There is a higher preponderance of males who develop this disease. Patients with an increased risk of acute cholecystitis, such as those with associated diabetes, immunosuppressant therapy, or hemoglobinopathies, have a higher chance of developing empyema of the gallbladder. Mortality is rare except in patients with advanced age, compromised immunity, or significant comorbidities. The incidence of postoperative complications regardless of the surgical approach is estimated to be 10 to 20%.[6]

Pathological examination of the emphysematous gallbladder show marked edema and inflammation. The wall of the gallbladder may be covered externally by a fibrinous exudate. There is obvious pus that can be seen in the lumen of the gallbladder, which at times appears creamy. On culture, this pus may not always grow organisms if the patient has been on antibiotic therapy. Microscopic examination of the mucosa can reveal ulceration and evidence of inflammation. There may be associated mucosal hemorrhage.

Patients with empyema of the gallbladder have symptoms similar to acute cholecystitis. Tenderness in the right upper quadrant and a positive Murphy sign are the most common and predominant presenting symptoms. As the pathology progresses, there may be a palpable gallbladder detected which is acutely tender even on light palpation. With the worsening of the disease, high fever, chills, rigors, and signs of systemic sepsis follows. Patients who are on immunosuppressants or suffer from associated diabetes may have a more prolonged course with few associated typical signs and symptoms as described above.

If gallbladder perforation has occurred, the patient may have tachycardia, fever, generalized sepsis, chills, and tenderness in the right upper quadrant. In severe cases, palpation of the distended gallbladder may be possible.

In patients present with an initial stage of empyema, symptoms, physical signs, and investigations may be unremarkable to distinguish from acute cholecystitis. Frequently the patient has a raised white cell count indicating an underlying infective cause. One should also obtain liver and renal function tests, coagulation profile, and a complete CBC.

An ultrasound is the most commonly used radiological investigation in gallbladder disease. It is not diagnostic but can raise the suspicion of an empyema when there is a very edematous gallbladder, or there are echogenic contents in the gallbladder associated with gallstones. A CT scan can be helpful when an ultrasonogram is not contributory. A CT scan may reveal an enlarged or distended gallbladder with edematous walls and, at times, pericholecystic collection. When the diagnosis is more difficult, an MRI can be of help. A heavily T2 weighted sequence on MRI can help in distinguishing pus from sludge. An MRI may also show a fluid level with a layering of purulent bile.

An increasing white blood count with a shift to the left in a patient with acute cholecystitis suggests adverse changes. The other relevant investigations are liver enzyme levels and PT (prothrombin time) and aPTT (activated partial thromboplastin time). Radiological findings alone may be insufficient for an accurate diagnosis of empyema of the gallbladder. A combination of clinical, radiological, and laboratory findings are crucial to arrive at a correct final diagnosis of empyema of the gallbladder.[8]

Prompt parenteral antibiotic therapy with urgent removal or drainage of the gallbladder should be the goal to prevent increased morbidity and the rare possibility of mortality. A broad-spectrum antibiotic, hydration, and optimizing the patient for surgery should be done ASAP.

Although the conventional practice is to perform an open cholecystectomy, it is possible to achieve a laparoscopic removal of the gallbladder by experienced surgeons. Surgeons who undertake a laparoscopic approach should have a low threshold to convert to an open procedure when encountered with technical difficulties. The conversion rate from laparoscopic to open cholecystectomy is higher in empyema of the gallbladder than that in uncomplicated acute cholecystitis. The higher rate of conversion is attributed to reduced visualization or distortion of the anatomical structures in the Calot's triangle and increased bleeding due to inflamed friable tissue.

An initial decompression of the distended gallbladder, either under radiological guidance or intraoperative laparoscopically guided, facilitates the more straightforward dissection of the gallbladder. Postoperative complication rates irrespective of approach, either laparoscopic or open, are higher than for cholecystitis for gallstone disease. Postoperative complications, including wound infection, bleeding, cystic duct stump leak, and common bile duct injury, subhepatic abscess, have all been reported. Subtotal cholecystectomy is rarely is performed when the surgeon encounters pericholecystic inflammation that makes a safe dissection of the Calot's triangle impossible. In older patients or those who are too ill to undergo surgery due to associated comorbidity, a percutaneous or transhepatic radiologically guided drainage is a temporizing procedure. This initial drainage procedure often leads to a dramatic improvement in the patient's condition, which then permits an elective cholecystectomy when the patient's condition improves.[9][6]

Antibiotic therapy is usually continued until the fever subsides.

If empyema of the gallbladder is treated promptly, the outcomes are good. However, individuals with advanced age, those who are immunocompromised or have diabetes, usually tend to have worse outcomes compared to healthy people.

The rates of conversion from laparoscopic to open cholecystectomy are much higher in the presence of empyema. Further, the postoperative complications tend to occur in more than 2 to 20% of patients and include wound infections, bile duct injury, subhepatic abscess, cystic stump leak, renal failure, acute respiratory distress syndrome, and sepsis.

Following surgery and removal of the gallbladder, IV antibiotics are required until the fever subsides and the WBC returns to normal. Most patients are discharged home on antibiotics for 1 week.

Empyema of the gallbladder may present with symptoms indistinguishable from acute cholecystitis. A high index of suspicion and a combination of clinical, radiological, and laboratory parameters helps in early diagnosis. Early and prompt surgical intervention in the form of cholecystectomy, if not feasible, cholecystostomy prevents high morbidity and rare mortality.

Empyema of the gallbladder is a serious disorder that requires prompt diagnosis and treatment. The infection can quickly become systemic and cause multiple organ failure. The condition is best managed by an interprofessional team.

Most patients require aggressive hydration, IV antibiotics, and surgery. There is a growing body of evidence indicating that the surgeon should remove the gallbladder within 48 to 72 hours after optimal hydration of the patient. Because the disorder is associated with serious complications during surgery, close monitoring is necessary. Besides the surgeon, the radiologist may be required to drain any residual collections. The patient may be monitored in the ICU, where the nurse is responsible for monitoring the patient closely for any respiratory distress and renal dysfunction. These patients are also prone to wound infections, deep venous thrombosis (DVT), and pneumonia- hence vigilance is necessary. The pharmacist should follow the culture results and make the necessary antibiotic changes once the drug sensitivity results are available.

The pharmacist should also manage the medications and ensure that polypharmacy does not occur, which can exacerbate the already compromised patient. Most patients with empyema of the gallbladder require several days of admission in the hospital, and nurses should ensure that DVT and pressure ulcer prophylaxis are started. The only way to improve outcomes is through open communication between the team members.[10] [Level 5]

When the condition is diagnosed and treated early, the prognosis is excellent. However, in patients who are immunocompromised, old, or those with diabetes, empyema of the gallbladder can be unpredictable and cause severe sepsis. Further, the rate of conversion of a laparoscopic procedure into an open procedure is also higher in gallbladder empyema. [9](Level III) 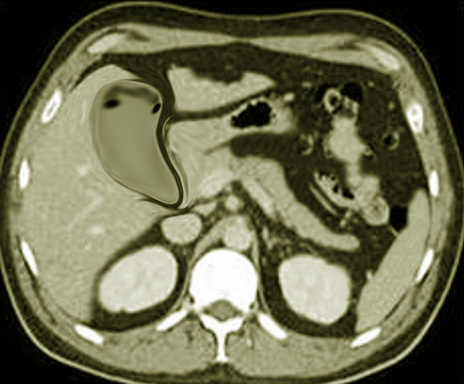