Successful ECG interpretation requires the utilization of the same stepwise method with each attempt. Like all aspects of electrocardiographic interpretation, accurate and rapid rhythm identification is paramount to providing the appropriate treatment to patients. This activity reviews the process of ECG rhythm interpretation and reviews the role of the interprofessional team in evaluating and treating patients with cardiac arrhythmias.

Rapid ECG interpretation can reveal arrhythmias before a patient becomes symptomatic. An ECG can reveal underlying cardiac problems and uncover electrolyte imbalances that, if left untreated, could lead to morbidity and/or mortality.[1] The key to successful ECG interpretation is the utilization of the same stepwise method with each attempt. A simple approach used by many practitioners is as follows: rate, rhythm, axis, intervals, ST-segment, and T waves. The rhythm on an ECG refers to what is driving the ventricular rate. Like all aspects of electrocardiographic interpretation, accurate and rapid rhythm identification is paramount to providing the appropriate treatment to patients.

One of the unique features of cardiac cells is automaticity. This is the ability to generate an electrical impulse without requiring a stimulus from an external source. Electrical impulses in the heart typically originate in the sinoatrial (SA) node, also known as the “pacemaker” of the heart. The impulses travel down the internodal pathways via propagation through both the right and left atria (the left using Bachman’s bundle) to the atrioventricular (AV) node or junction. The purpose of the AV node is two-fold: (1) to allow for propagation of the electrical impulses from the atrium to the ventricle and (2) to delay these impulses to the ventricles to allow for the atria to empty completely. This is commonly referred to as atrial kick and may account for up to 30% of cardiac output in young people and more as patients age. The P wave on ECG represents atrial depolarization. The PR segment represents the delay at the AV node. The impulse then propagates down the bundle of His, which extends to the right and left bundles. Then, Purkinje fibers are activated, and a rapid, synchronized contraction of the ventricles occurs. This results in the QRS complex. After a small delay, the ventricles repolarize and prepare for the next impulse. This results in the T wave. The delay between depolarization and repolarization is called the ST segment.

Sinus rhythms originate in the SA node. The SA node is located in the right atrium and is the heart's natural pacemaker. The normal rate of the SA node is between 60 and 100. On ECG, sinus rhythm is represented by monomorphic P waves before each QRS complex and is regular. These are typically upright in the inferior leads and downgoing in aVR. QRS complexes are generally narrow unless there is a conduction delay. Sinus tachycardia (rate greater than 100 beats per minute) can be the first hint of an underlying pathology such as hyperthyroidism or pulmonary embolism.[2][3]

In atrial fibrillation, the atria have no organized rhythm, and there is no synchronized depolarization or repolarization. Instead, electricity is passed from one atrial myocyte to any surrounding repolarized myocyte, causing the atria to quiver rather than contract as a unit. The isoelectric line is lost, and no discernible P waves will be seen on ECG. QRS complexes will be narrow unless there is an underlying right or left bundle branch block or if the ventricular rate is so fast that there is a rate-related bundle branch block (typically the right bundle). The ventricular rate is variable. This rhythm is classically described as irregularly irregular. Risk factors for developing atrial fibrillation include prolonged uncontrolled hypertension, obstructive sleep apnea, advanced age, a history of congestive heart failure, and hyperthyroidism.[4]

In atrial flutter, there are regular, rapid atrial contractions that usually have a distinctive "saw-tooth" pattern on ECG. As with atrial fibrillation, the QRS complexes will be narrow unless there is an underlying right or left bundle branch block. The ventricular rate is so fast that there is a rate-related bundle branch block (typically the right bundle). The atrial rate of atrial flutter is typically about 300 beats per minute, and the ventricular response can be variable but often presents initially as 2:1 AV block, resulting in a ventricular response of about 150 BPM.  Any time there is a regular rhythm with a narrow QRS complex at 130 to 170 BPM, atrial flutter should be considered.

Atrial tachycardia is a rhythm that originates in a single micro reentry focus in the atria. This is seen on EKG with a P wave of different morphology than the sinus P wave. The rhythm is regular, and the QRS complex is narrow. The P axis can also be different, resulting in inverted P waves in inferior leads. Since this is from a single focus, the P waves will be uniform throughout this rhythm, and it can be paroxysmal (comes and goes) or sustained.[5] The rate is typically 130 to 170 BPM.

Whereas atrial tachycardia is due to a single ectopic focus in the atrium, wandering atrial pacemaker and MAT are due to multiple micro reentry foci in the atrium. If the ventricular rate is less than 100 bpm, it is considered a wandering atrial pacemaker, and if the ventricular rate is greater than 100 bpm, it is considered MAT. In both of these rhythms, there are three or more atrial foci. On ECG, this is defined as three distinct P wave morphologies and three different PR intervals. The QRS will typically be narrow unless there is an underlying ventricular conduction delay. Since the multiple foci are firing independent of each other, these rhythms may appear as irregularly irregular.

AVNRT occurs when two pathways within the AV node itself have varying rates of conduction and repolarization. When the node is stimulated, typically by a premature atrial complex (PAC), at a time when the slowly conducting pathway has repolarized, but the rapidly conducting pathway has not, AVNRT can ensue. When the slowly conducting pathway reaches the ventricle, the QRS is seen, and the nodal fast pathway then conducts back up to the atrium, creating reentry within the AV node itself. This cycle repeats itself and is seen on ECG as a regular, fast rhythm that is usually about 150 BPM with a narrow QRS complex. Retrograde P waves (P waves that occur after the QRS complex) are often seen only at the tail end of the QRS. This is often most easily seen in lead V1 as what is referred to as a pseudo R'.

PACs are commonly found on ECGs. They are due to an ectopic focus within the atrium firing earlier than the sinus node. P wave morphology and PR interval for this premature atrial beat are usually different than the sinus P wave, though it may be similar if the focus is close to the SA node. While the RR interval between the last beat and the ectopic beat is shorter than normal, the interval between the last sinus beat and the next sinus beat is typically shorter than two normal R-R lengths because there is an incomplete compensatory pause because the PAC depolarizes the SA node.

Premature ventricular contractions (PVCs) occur when an ectopic focus in the ventricles fires. Since the impulse originates in a ventricle, it is slowly conducted through the ventricles, resulting in a wide QRS complex. Like other premature contractions, these occur during other rhythms. There will be no P wave before the ectopic beat, and there is typically a compensatory pause such that the length of two normal R-R intervals is preserved. This is because the PVC does not depolarize the SA node, and the SA node continues to fire at its regular intervals. PVCs are typically benign and occur in healthy and unhealthy individuals. When PVCs occur every other beat, it is referred to as ventricular bigeminy, and when they occur every third beat, it is referred to as ventricular trigeminy.[8]

Junctional escape rhythms occur either when there is sinus node disease with a very slow or nonexistent atrial rhythm (sick sinus syndrome) or if there is complete heart block high in the AV node. The AV node has its automaticity (typically 40 to 50 bpm) and can become the heart's primary pacemaker. Not uncommonly in junctional escape rhythms, particularly when they are present due to sinus node disease, there is a retrograde P wave seen just before or during the QRS, as the AV node depolarizes the ventricle and atrium simultaneously.

Ventricular escape rhythms typically occur when there is disease in the AV node (i.e., complete heart block). The intrinsic rate of the ventricles is 30 to 40 bpm. The QRS is wide because the complexes initiate in the ventricle. If there is concomitant SA node disease, there may not be P waves, but most often, there are P waves at a faster rate than the ventricular escape with no discernible relationship between the P waves and QRS complexes.

The rhythm on ECG is usually clinically significant because of how it affects the rate. When the heart beats too slowly, it can cause hypotension and hypoperfusion. Symptoms include fatigue, dizziness syncope/near syncope, and exercise intolerance.[9] Rapid heart rates can cause palpitations, dizziness, lightheadedness, and syncope because of decreased cardiac output.

Accurate rhythm identification is important because treatment directly depends on what type of rhythm the patient has. Recognizing the underlying cause of an arrhythmia is always indicated, and sometimes it is the only treatment necessary for the patient.

Fast and accurate rhythm identification is an important skill for medical professionals in many different disciplines. ECGs are performed in the prehospital setting, physicians' offices, the emergency department, during surgery, and throughout the hospital. Emergency medical technicians (EMTs), nurses, and physicians are responsible for recognizing potentially dangerous rhythms to allow for proper patient care before it becomes a life-threatening issue. Quick and accurate rhythm identification by anybody in the healthcare team can improve morbidity and mortality in any of these patients. It is important to look at the patient as a whole when interpreting ECG rhythms since the knowledge of an individual patient on whom an ECG is ordered may result in a more critical rhythm assessment and might account for the higher accuracy of rhythm interpretation.[10] [Level 4] 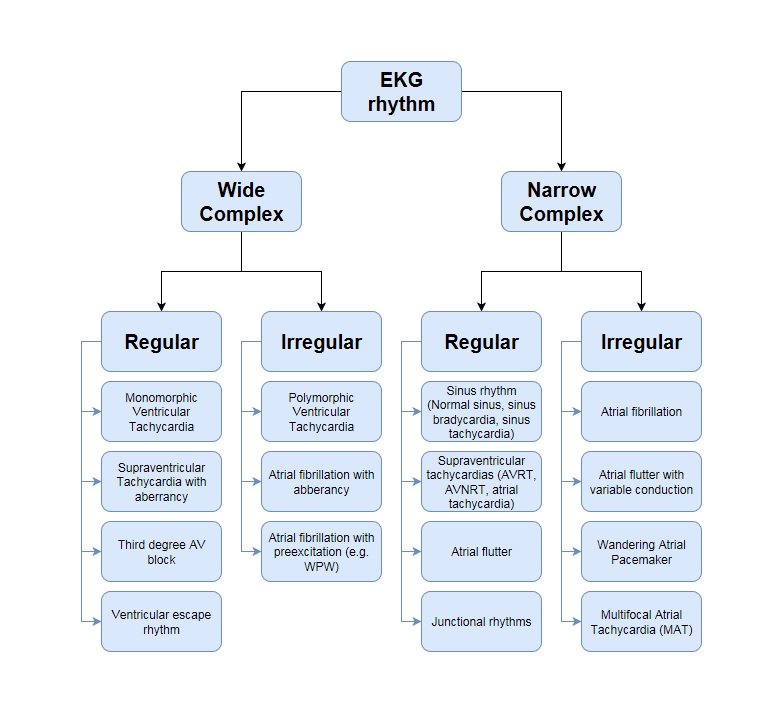