Electroencephalogram of a newborn shows unique features compared to older children and adults. The principles employed in the identification of abnormalities emphasize the polyphasic sleep activity of newborns and the maturation of the brain. This activity covers essential features of abnormal EEGs in the newborn and highlights the role of the interprofessional team in treating patients with this condition.

Electroencephalogram of a newborn shows unique features compared to older children and adults. The principles employed in the identification of abnormalities emphasize the polyphasic sleep activity of newborns and the maturation of the brain.

This chapter covers essential features of abnormal EEGs in newborns. A basic understanding of the normal EEG patterns in newborns is a crucial requirement.

In general, abnormalities of neonatal EEG can be classified as follows:[1][2]

In the preterm neonate between 27 and 30 weeks of postmenstrual age, there is a discontinuity of background rhythm compared to that of more mature newborns. There are high voltage bursts of fast activity interspersed with lower voltage activity. With maturity, the inter-burst intervals become shorter.

However, the prolongation of inter-burst intervals (IBI) can be an indicator of diffuse brain injury or structural abnormality of the cortical network. The acceptable duration of the longest IBI within the record varies according to postmenstrual age and is also state dependent.[3]

Acceptable duration of the longest IBI according to postmenstrual age include:

Prolongation of the IBI is, however, non-specific and may be secondary to a neurological insult or can also occur due to medication effects.

Abnormal Voltage and Lack of Differentiation of Background Activity

Loss of faster frequencies in background activity is the earliest change in response to abnormalities in cortical function. Episodic generalized or regional voltage attenuation that is transient shows milder dysfunction compared to persistent, prolonged depression. The complete absence of poly frequency activity suggests a lack of differentiation along with other abnormalities and can be related to a severe brain insult. These can be noted in diffuse processes such as perinatal hypoxia-ischemia, metabolic encephalopathies, meningitis, encephalitis, cerebral and intraventricular hemorrhages. Persistently depressed and poorly differentiated activity in follow-up EEG recording after the first 24 hours carries a poor prognosis.

In simpler terms, dyschronism signifies a lag of maturity of the EEG from the expected postmenstrual age (conceptional age).

The term external dyschronism refers to disordered maturational development where the features of the record in all states demonstrate a lag or discrepancy between stated postmenstrual age (PMA) and the PMA estimated by a review of the EEG. A gap of greater than 3 weeks suggests significant neurological dysfunction, particularly if associated with an attenuation of background activity and multifocal epileptiform activity (sharp waves and spikes).

Internal dyschronism refers to the discrepancy in the postmenstrual age determined during waking and in the phase of deeper stages of quiet sleep (QS). If a lag or discrepancy of more than 3 weeks is noted to be present, then this may also be taken as a marker of cerebral dysfunction.

An isoelectric recording that is invariant over several or serial recordings is indicative of cortical neuronal death (note not of the brainstem). Of course, this degree of depression of neuronal function is not ordinarily encountered in cases of medication-induced coma or encephalopathic states.

The most rigorous technical standards are to be applied with attention to the number of scalp electrodes (8 plus reference), interelectrode distance (greater than 10 cm), polygraphic recording of ECG, EMG, and respiration, application of appropriate intense sensory and painful stimulation, appropriate electrode impedances, time constants, and sensitivity settings (2 microV/mm) to diagnose electrocerebral silence.

Synchronous bursts (0.5 to 10-sec duration) alternating with or followed by isoelectric background activity (2 to 10 sec) in a record that is invariant and non-reactive is considered as fulfilling criteria for a suppression-burst pattern. This pattern can be seen in severe cerebral anoxia, drug-induced, toxic-metabolic encephalopathies, and severe structural malformations of the brain.

It is also the hallmark of epileptic encephalopathies with suppression-burst (Ohtahara syndrome and early myoclonic encephalopathy). In these conditions, the bursts contain very high amplitude polymorphic variable sharp and spike-wave patterns with or without symmetry, with low amplitude intervals that vary from 2 to 10 seconds, and the pattern persists in all stages of wakefulness and sleep.

Discontinuous recordings that do not meet the full criteria for burst suppression are perhaps encountered more commonly, particularly in the context of perinatal hypoxic-ischemic encephalopathy. The bursting activity may be of longer duration (10 to 30 sec), and IBI occupied by very low amplitude activity of less than 10 microV, less than 10-sec duration. These features may be associated with loss of sleep cycling and lability. There may be other variations on this theme of discontinuity, which have been described in the literature.

Other Patterns of Uncertain Significance

Positive temporal sharp waves (less than 400 ms in duration) seen over temporal (T3, T4) electrodes can also be encountered in term neonates and may not be considered to be of clinical significance unless persistent in serial records. Similarly, short duration central sharp waves (3 to 7 sec) may occur in short bursts and may not stand out from the background activity are of uncertain clinical significance.

Focal/unilateral attenuation or voltage depression These findings acquire significance in the context of a persistent voltage asymmetry throughout the recording. Focal infarcts, hemorrhage, cystic lesions, accumulation of subdural fluid, and sometimes scalp edema on the dependent side depending on the infant's position can be associated with such a focal or unilateral voltage depression.

Surface positive sharp waves that are broad-based, often localizing around C3, C4, and Cz electrodes and may occur at a frequency of 1 to 2 per min under pathological conditions. These waves are of higher amplitude and stand out against the background activity, and can sometimes be accompanied by superimposed waves of varying morphology and frequency. These PRSWs have been shown to be most frequently associated with periventricular white matter injury and consequential later motor impairments but have also been encountered in a variety of conditions such as meningitis, hydrocephalus, perinatal HIE. They have to be distinguished from sharp transients that can be encountered over similar locations but are of smaller amplitude and are less prominent.

Broadly, neonatal seizures may be classified into:

The EEG features of background activity can provide some direction towards establishing a possible diagnosis and prognosis. In infants suspected of having seizure activity, those with abnormal EEG background are more likely to have seizures than those with a normal background. On the other hand, those with documented clinical seizure activity have been more likely to have a normal EEG background. Severe background EEG abnormalities such as burst suppression have been associated with early myoclonic encephalopathy (EME) and Ohtahara syndrome (Early Infantile Epileptic Encephalopathy).[7] A theta pointu alternant pattern (generalized sharply contoured theta alternating with periods of generalized attenuation has been reported in association with benign familial neonatal seizures as well as during the postictal state.

Sustained rhythmic activity on the EEG, with highly variable morphology (spikes, sharps, slow waves, mixed waveforms) amplitude and frequency, lasting for longer than 10 sec, is considered suggestive of electrical seizure activity. Such activity is rarely documented under 33 to 34 weeks CA; with increasing maturity of the neonatal brain, the ability to initiate and sustains seizure activity seems to become apparent. Another term, BIRDs (brief ictal rhythmic discharges), have been used to describe the rhythmic ictal activity of less than 10-sec duration. Ictal rhythms are generally focal in onset, can arise in more than one region, tend to spread as the seizure evolves, often to one hemisphere, or may become generalized. The morphology of the discharge can change during a seizure, which helps differentiate it from monomorphic rhythmic patterns that may arise from artifacts. Specialized forms of focal discharges such as periodic lateralized epileptiform discharges (PLEDs) may be seen in neonates and have been described in association with herpes simplex encephalitis, focal ischemic strokes, and have sometimes been considered as indicative of seizures in a depressed brain.

Generalized ictal rhythms are rare but may be seen in the context of generalized myoclonus (generalized sharps) and spasms (generalized attenuation or electrodecrement). One further term (electroclinical dissociation or decoupling) needs to be considered here. The term denotes a situation wherein the context of the administration of AEDs to infants with electroclinical seizures; the clinical manifestations may stop while the electrical ictal rhythms continue to be expressed.[8]

At other times, this may be noted when a sick infant is paralyzed for intubation and mechanical ventilation, there may be no clinical features, but the EEG continues to show ictal rhythmic patterns.

Even with current multichannel video electroencephalography, there is significant difficulty in the diagnosis and management of neonatal seizures. This is compounded by the extreme prematurity and non-specific patterns as well as seizures without EEG correlation.

Many neonatal units employ much simplified electroencephalographic techniques amplitude-integrated EEG (aEEG) for rapid screening and monitoring. [9] It is unclear whether the use of aEEG has improved outcomes of neonatal seizures.[10]

A dedicated team of neonatal nurses, pharmacists, neurologists, and neurophysiologists with state-of-the-art technology is essential in the diagnosis and management of neonatal seizures.

Education of the caregivers and health professionals managing the neonatal intensive care unit should be given adequate training in the management. 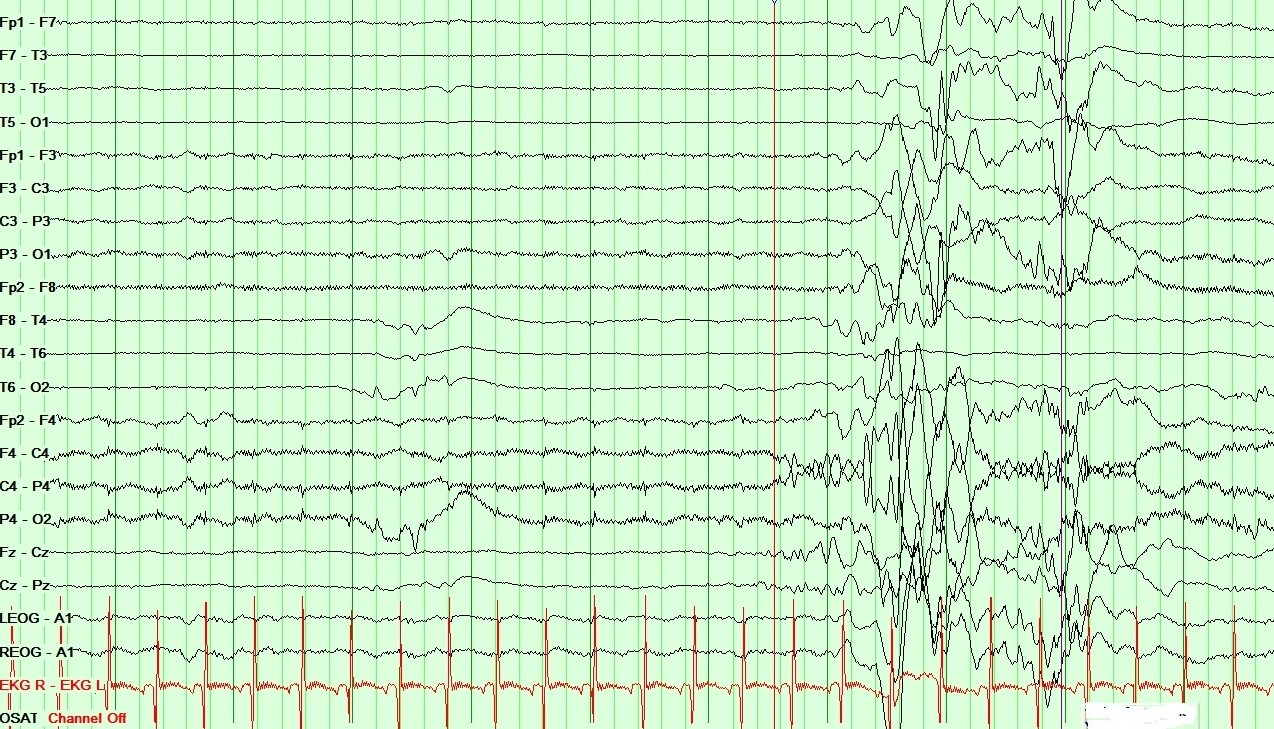