A double-lumen tube (DLT) is an endotracheal tube designed to isolate the lungs anatomically and physiologically. Double-lumen tubes (DLTs) are the most commonly used tubes to provide independent ventilation for each lung. One-lung ventilation (OLV) or lung isolation is the mechanical and functional separation of the 2 lungs to allow selective ventilation of only one lung. The other lung that is not being ventilated passively deflates or is displaced by the surgeon to facilitate surgical exposure for non-cardiac operations in the chest such as thoracic, esophageal, aortic and spine procedures. This activity reviews the use of the DLT, its indications, contraindications, and complications in thoracic surgery.

A double-lumen tube (DLT) is an endotracheal tube designed to isolate the lungs anatomically and physiologically.[1] Double-lumen tubes (DLTs) are the most commonly used tubes to provide independent ventilation for each lung. One-lung ventilation (OLV) or lung isolation is the mechanical and functional separation of the 2 lungs to allow selective ventilation of only one lung. The other lung that is not being ventilated passively deflates or is displaced by the surgeon to facilitate surgical exposure for non-cardiac operations in the chest such as thoracic, esophageal, aortic and spine procedures. It can also be used during minimally invasive cardiac surgery and in disease processes affecting 1 lung to prevent soiling from the contralateral lung. DLTs also allows bronchial toilet without interrupting ventilation.

For successful placement of a DLT, it is important to understand the anatomy of the trachea and bronchi. In humans, the trachea arises at the level of the cricoid cartilage and extends up to carina the narrowest portion of the airway in adults, where it bifurcates into right and left main stem bronchus. The average length of the adult trachea is 12 cm and comprises 18 to 22 C-shaped cartilaginous rings anterolaterally, the ends of which are linked posteriorly by the superficial membranous wall and the trachealis muscle.

Ventilation and perfusion of the lungs are well-matched anatomically, with dependent portions of the lungs receiving both greater blood flow (perfusion) because of gravity and greater ventilation because of the gravitational effect of lung compliance. The initiation of OLV stops all ventilation to one lung, which creates an obligatory shunt (i.e., that lung is perfused but not ventilated). because the left lung is smaller, there is less shunt when the left lung is collapsed.

A DLT is indicated for surgeries or procedures requiring lung isolation.[2][3]

Due to the larger size and more complex design than the single lumen tube (SLT), intubation with a DLT can be a challenge, even in a patient with a normal airway. Use of a DLT is therefore relatively contraindicated in a patient with[4]:

Distorted airway anatomy due to tortuosity or lesion extending into the airway is a contraindication to placement of DLT.  In certain instances, such as where conversion to an SLT may be needed at any time during surgery or the need to re-intubate for postoperative mechanical ventilation is warranted, it is advisable to choose an SLT with a bronchial blocker for lung isolation. The need to re-intubate with an SLT may be risky due to the presence of airway edema.

DLTs specially designed for patients with a tracheostomy (double-lumen tracheostomy tube set) are commercially available. They have the same design as conventional DLTs but are shorter and curved between the intratracheal and extra tracheal parts.[5][6] however, its use is limited.

DLTs have 2 endotracheal tubes (ETT) that are "bonded" together, to allow each tube to ventilate a specific lung. The DLT can be left-sided or right-sided depending on the main stem bronchus which its distal (longer) lumen is designed to fit in. The longer lumen (bronchial lumen) is designed to reach the main stem bronchus while the shorter lumen (tracheal) ends in the distal trachea. [Figure 1] There are several types of double lumen tubes. However, all are similar in design and made of Polyvinyl chloride. Most DLTs have color-coded cuffs and pilot balloons. The bronchial cuff, which is typically a high-pressure low volume cuff, and its pilot balloon are blue, while the tracheal cuff which is a high volume low-pressure cuff, and its pilot balloon are clear.[7][8]

The DLT is supplied in a package containing the tube with a stylet, connector, and suction catheters. Depending on the manufacturer, they may also come with an apparatus to provide continuous positive airway pressure (CPAP) to the non-ventilated lung. There are different manufacturers.

When seen in cross-section, each tube is D shaped. They come in different sizes  — 26 Fr, 28 Fr, 32 Fr, 35 Fr, 37 Fr, 39 Fr, and 41 Fr.[9][10] A 26 Fr DLT can be used in children over the age of 8 years. [10]Placing a larger DLT may cause trauma to the airway and placing too small a DLT may fail to provide lung isolation requiring cuff hyperinflation as a result which can cause trauma and ischemia to the airway. Smaller tubes are also more likely to migrate distally and may be difficult to suction and ventilate through.

Reviewing a chest x-ray, CT scan, or MRI before placing a right-sided DLT may help to locate the position of the right upper lobe take off from the right mainstem bronchus.

Because of the higher safety margin, a left-sided DLT is commonly used. However, right-sided DLT may be preferred when it is important to avoid manipulation of left bronchus or when left bronchus is narrowed or has anatomical variations, left pneumectomy, left lung transplant, left mainstem bronchus stent or suspected disruption of the left tracheobronchial tree.

When preparing the DLT for use, both the trachea and bronchial cuffs should be inflated to check for leaks and symmetrical cuff inflation. Consider adding water-soluble lubricant to the stylet and insert the stylet into the bronchial side, ensuring that the stylet is not protruding beyond the tube. The connector, which connects DLT to the ventilator circuit should be assembled and ready before intubation. A fiberoptic Bronchoscope should be available to confirm the position of the DLT.[12] Knowledge of the tracheobronchial anatomy is very helpful in confirming correct placement of the DLT.

There is a lack of objective guidelines in the proper selection of DLT sizes; 39-Fr and 41-Fr tubes are used for adult males while 35-Fr and 37-Fr DLTs are used for adult females. A properly-sized DLT is one in which the main body of the tube passes without resistance through the glottis and advances easily within the trachea and in which the bronchial component passes into the intended bronchus without difficulty.[13]

There are 2 techniques used for the insertion of a DLT:

Once inserted, the DLT is connected to the ventilator circuit via the DLT connector, and the detection of ETCO2 confirms placement in the trachea after both cuffs are inflated to seal leaks. No more than 3 mL of air should be required to create a seal in the bronchial cuff. Cuff pressures should be measured to prevent airway injury. Confirmation of correct positioning of the DLT can be done by auscultation or with fiberoptic bronchoscopy. Auscultation and bilateral chest wall movement is first confirmed. On clamping the endobronchial lumen limb connector, breath sounds should be absent from the corresponding side of the lung if the endobronchial lumen is in the correct bronchus. On clamping the endotracheal limb connector and ventilating through the endobronchial lumen, breath sounds should be absent from the opposite side of the chest.

Once the DLT is in place, confirm correct placement by inserting the fiberoptic scope through the tracheal lumen to verify that the bronchial lumen is in the correct main-stem bronchus and there is no bronchial cuff herniation.[15][12]

Though the tracheal lumen confirm that:

Next, the fiberoptic bronchoscope is advanced through the endobronchial lumen.

Fiberoptic bronchoscopy is the gold standard for confirmation of correct placement of a DLT. Auscultation alone is unreliable as an indicator of proper DLT placement.[16]

Troubleshooting techniques for DLT insertion include:

To initiate one-lung ventilation, the bronchial cuff is inflated, the lung to be isolated is clamped off at the corresponding connector, the connector is then opened to the atmosphere to allow lung collapse. Lung collapse is most rapid if initiated at end expiration.

Intraoperatively the bronchial cuff should be kept deflated (unless needed to avoid the spread of blood or infection) and should be inflated only during the time of lung isolation to minimize bronchial mucosal injury.

The most lethal complication arising from the use of a DLT is airway rupture from traumatic placement.[17][18] Injury to tongue, lips, and teeth may also occur from laryngoscopy. A majority of airway injuries were associated with undersized DLTs, particularly in females who received a 35-Fr or 37-Fr DLT.[19] Undersized DLTs tend to migrate too far distally into the main stem bronchus, or that the endobronchial cuff requires a larger amount of air when smaller tubes are used predisposing to mucosal ischemia.

Other complications include hypoxemia due to tube malposition, displacement, tube occlusion from secretions or blood. Inadvertent entrapment of the DLT in suture lines during procedures have also been reported.

Malposition of the DLT can lead to life-threatening consequences. Ventilation can be severely impaired, leading to hypoxia, gas trapping, tension pneumothorax, cross-contamination of lung contents, and interference with surgical procedures.[20]

Factors predisposing to airway injury include:

Double-lumen tubes are used for multiple complex surgical procedures and lung isolation in some non-surgical patients. Since malposition and displacement of these tubes can lead to life-threatening consequences, an interprofessional education is an essential component to avoid morbidity and mortality. Everyone involved in the care of patients requiring DLT placement including anesthesiologists, intensivists, resident physicians, CRNAs, AAs, nurses, and respiratory therapists in the intensive care unit must know the indications for placement, identify correct placement, confirm the position, and be able to troubleshoot complications from the placement of DLT. Daily chest x-ray and auscultation to confirm placement and bronchoscopy should be immediately available if malposition is suspected. Respiratory status should be monitored continuously, and caution should be used during the positioning and transport of patients. The need for continued placement should be addressed daily as these tubes have the potential for airway injury and should be changed to SLTs if mechanical ventilation is still needed, but lung isolation is no longer indicated. 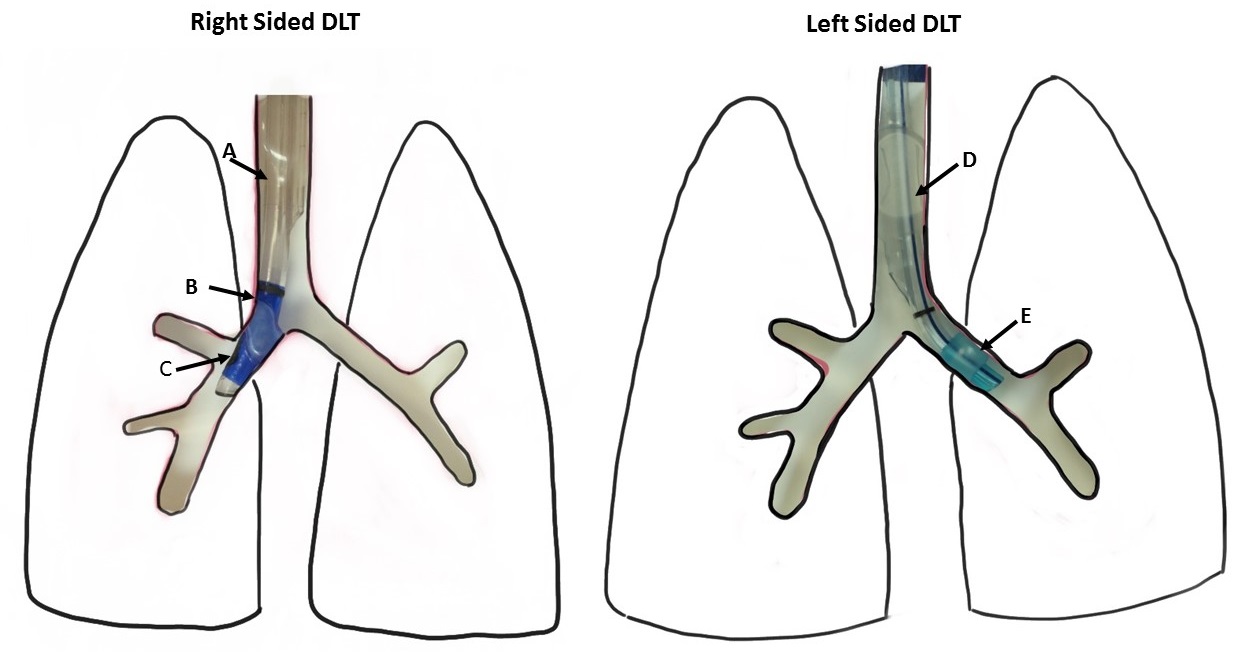