The dorsal spinocerebellar tract (DSCT), also known as the posterior spinocerebellar tract or Flechsig tract, is a somatosensory part of the sensory nervous system that relays unconscious proprioceptive information from the lower limbs and trunk of the body to the cerebellum. Sensory information is recognized as an electrical signal and is transmitted via various tracts throughout the nervous system. Proprioception is the ability to sense position and perform movements of different parts of the body. Proprioceptors, a type of mechanoreceptor, are responsible for recognizing proprioceptive signals. Golgi muscle tendons and muscle spindles are two main types of proprioceptors that detect muscle strain and muscle contraction, respectively.[1]

The DSCT transmits proprioception information from Golgi tendon organs and muscle spindles of the trunk and lower limb. Information is relayed from the ipsilateral lower limb and trunk. Each muscle spindle consists of a primary ending and a secondary ending in the middle of the spindle. While the primary endings respond to both velocity and muscle length, the secondary endings can only respond to muscle length. All of the sensory information from the periphery is transmitted to the pseudounipolar neurons in the dorsal root ganglion. The first-order neuron for the dorsal spinocerebellar tract transmits impulses to a specific location in the posterior gray horn known as Clarke’s nucleus. This set of nuclei range from the C8-L3 portions of the spinal cord, collectively referred to as Clarke’s column. The DSCT ascends on the ipsilateral side, enters the cerebellum via the inferior peduncle, and terminates as mossy fibers in the cerebellar cortex. Specifically, the information transmits to the vermis and paravermis in the anterior lobe of the cerebellum. The cerebellum then uses the proprioceptive information to construct and coordinate voluntary movement by knowing the position sense of the lower limbs and the trunk.[2]

The DSCT has a tract that runs parallel with it: the ventral spinocerebellar tract (VSCT). Instead of relaying proprioceptive information, the VSCT relays motor information. Even though both VSCT and DSCT relay information ipsilaterally, the DSCT stays ipsilateral throughout the entire tract, while the VSCT decussates twice. The VSCT decussates first at the level of Clarke’s nucleus and rises contralaterally from the input to the brain. The tract enters through the contralateral superior cerebellar peduncle, where it will decussate back to the ipsilateral side of the input within the cerebellum.[3]

Cerebellar-projecting neurons transmit proprioceptive information through the central nervous system. ATOH-1 is a transcription factor implicated in forming these neurons. Research has determined that ATOH-1 lineage neurons contribute to the reception of unconscious proprioceptive information from both the hindbrain (non-Clarke's division of the dorsal spinocerebellar tract) and those from the forelimb (cuneocerebellar tract).[4]

Anatomically, the spinal cord pathways cluster close to one another. Therefore, when suspecting damage to the DSCT, damage to other tracts nearby should be suspected and tested to confirm function. An isolated injury of the DSCT would be uncommon given the proximity of these critical structures. However, many clinical scenarios can cause DSCT dysfunction: Friedreich ataxia, vitamin E deficiency, tabes dorsalis, Brown-Sequard syndrome, and subacute combined degeneration (vitamin B12 deficiency). 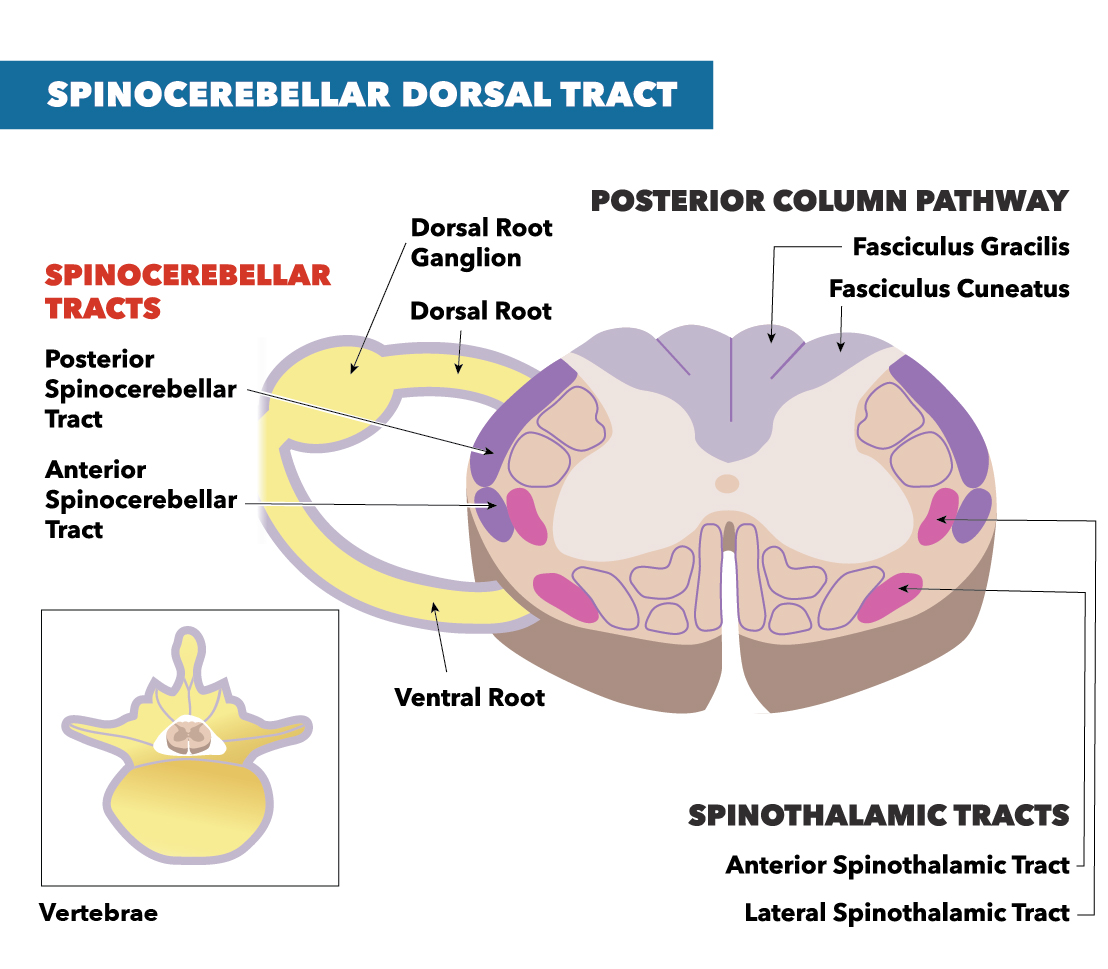