Two conditions that can lead to angina symptoms include coronary artery spasm and microembolization. Coronary artery spasm can cause partial or complete occlusion of the arterial lumen, resulting in limited blood flow to the myocardium. This can result in anginal symptoms and more deleterious effects like myocardial ischemia, infarction, arrhythmias, and even sudden cardiac death. Microembolisation usually occurs in the setting of existing coronary artery disease when shards of fragments of disturbed plaque progress to micro-circulation and clog up the small arterioles and capillaries. This leads to increased resistance to flow across the coronary bed, which raises intra-coronary pressure, impairs nutrient exchange, and causes endothelial dysfunction, which results in ischemia. This activity reviews the evaluation and management of coronary spasm and micro-embolization and highlights the role of the interprofessional team in caring for affected patients.

The heart receives its blood supply from coronary arteries, which is divided into right and left major branches[1]. The left coronary artery supplies the bulk of the heart muscle and divides into two divisions: the left anterior descending and left circumflex arteries. The right coronary artery supplies the majority of the right side of the heart and also the sinoatrial (SA) nodal system in most persons. The coronary arteries are medium-sized arteries and have a muscular component that can predispose them to spasm, a function of a muscular artery in the body under physiological and pathological conditions. Coronary artery spasm is a constriction of the coronary artery, due to a variety of causes, which can cause partial or complete occlusion of arterial lumen resulting in limitation of blood flow to myocardium which can cause angina symptoms and can lead to significant deleterious effects like myocardial ischemia, infarction, arrhythmias, and even sudden cardiac death.[2]

Microembolization occludes small vessels, which often leads to microvascular dysfunction and development of back pressure in the coronary tree, which can also lead to myocardial ischemia and its accompanying symptoms. Microembolization usually occurs in the setting of existing coronary artery disease with fragments of a plaque that is disturbed, spontaneously or due to coronary intervention, which then progresses to micro-circulation and clogs up the small arterioles and capillaries.[3]

Coronary artery flow depends on the autonomic nervous system. The sympathetic nervous system activation will increase the effects of catecholamines, which will induce vasoconstriction and further decrease the blood flow. It is thought that coronary artery spasm can develop if there is unopposed alpha constriction.[4] The parasympathetic nervous system will not have a direct effect on spasm, but its reduced activity will promote more unopposed adrenergic activity, which can induce spasm.[5] Smoking, endothelial dysfunction, physical stress, and drugs like cocaine can also contribute to the development of spasm. Younger patients are more likely to develop spasm as compared to older patients. Genetic factors also contribute to the development of spasm.

Microembolization typically has associations with coronary artery disease with emboli originating from coronary plaques and obstructing the small vessels and distal circulation.[6]

Microembolization leads to increased resistance to flow across the coronary bed, which raises intracoronary pressures by vasoconstriction and impairs nutrient exchange as well as causing endothelial dysfunction, which results in ischemia.[3]

The patients usually present with sudden onset, pressure like radiating chest pain, which generally lasts for 5-20 minutes. The symptoms are recurrent and present in a similar way during each episode. If the symptoms do not respond to initial medical treatment, the patient can develop myocardial infarction or even sudden death. The classic presentation mimics typical angina pectoris, however resting pain with no pain between the episodes can be used to differentiate from classic angina pectoris.[8]

Physical examination should be performed to get baseline cardiovascular status to compare during the episodes. The patient can develop tachycardia, hypotension, or third heart sound during the episode, and return to baseline after the episode. If the right coronary artery is involved, the patient can develop bradycardia and hypotension because of the involvement of the nodal system and disruption of the blood supply to the right ventricle.

The best initial investigation is an electrocardiogram, which should be done in all patients presenting with chest pain. The findings vary from normal EKG to ST-segment changes, which will resolve either spontaneously or with treatment. Serial cardiac troponin testing is also indicated to rule out myocardial infarction. In a case where there are no EKG changes, and patients have recurrent symptoms, ambulatory EKG can also be done to detect episodes of ST-segment elevation or depression with or without angina. Exercise has been shown to trigger spasm, so exercise testing can also be done to induce spasm once ECG and cardiac troponins have ruled out acute coronary syndrome (ACS). Stress tests combined with imaging will often yield perfusion defects/ ischemia in the territory of coronary artery suffering from spasmodic episodes. Invasive coronary angiography (ICA) will usually reveal non-obstructive coronaries, in which cases coronary functional testing via checking coronary flow reserve and coronary microvascular resistance is the next step, typically done by methods as fractional flow reserve (FFR), coronary flow reserve (CFR), instantaneous wave-free ratio (iFR), and index of microcirculatory resistance (IMR). Provocative testing can be undertaken to look for coronary vasospasm.

Invasive coronary angiography with provocative testing is the gold standard for the diagnosis.

Pharmacological management depends on the presentation and the EKG changes. Nitrates will help in reducing symptoms, but coronary angiography should be done to rule out active coronary lesions. If coronaries are normal, long-acting nitrate with or without calcium channel blocker will improve the symptoms. In acute attacks, sublingual nitrates can also be used to get an immediate effect. Calcium channel blockers have vasodilating properties and can be used to prevent recurrent attacks. The dose should be gradually increased to reach the maximal tolerable dose. Beta-blockers should be avoided as it increases the risk of spasm, but if the patient has left ventricular (LV) dysfunction, then beta-blocker will need to be instituted considering the associated mortality benefit. ICD should also be a consideration in patients for secondary prevention.[9]

The prognosis of coronary spasm is good if promptly recognized, and patients usually respond well to medical management.

Microembolization on the other end doesn't respond very well to treatment especially in the setting of ACS or coronary intervention. It usually leads to microvascular dysfunction.

The patient should be educated to avoid smoking cessation as this will prevent recurrent symptoms.

If the patient improves on medical management, medication compliance will be essential as skipping of the medication can lead to the rebound spasm.

Knowledge of the mechanisms and triggers of coronary artery spasm in the clinical setting is still somewhat limited. Experimental and clinical studies point out the presence of hyperreactivity of coronary smooth muscle to constrictor stimuli. This hyperreactivity is nonspecific and appears multifactorial. The causes of vascular smooth muscle cell hyperreactivity remain poorly understood, but chances are they will be different among patients. While it has been suggested that endothelial dysfunction is involved in coronary spasm, it is not likely to be a direct cause. However, it can facilitate the effects of vasoconstrictor stimuli in the spastic segment. Several triggers have also been identified that could act in the same patient with the potential to cause angina attacks in different conditions. Accordingly, these triggers usually represent an elusive therapeutic target.

Microembolization needs to be a consideration in the pathophysiology of coronary artery disease (CAD), and it represents a key event during coronary intervention, especially in the ACS setting. Spontaneous and procedural micro-embolization can both lead to myocardial injury, but the main clinical implications are in ACS patients. A number of diagnostic tools are available for the detection of myocardial injury following micro-embolization and progress in intravascular imaging, and functional intracoronary tests will be helpful in early detection and upstream identification of those anatomical settings at higher risk of microembolization.

Physicians should be aware of these entities as they are more likely to be diagnosed when suspected, only because they require highly specialized testing utilizing the help of cardiologists, imaging specialists as well as coronary interventionists.

A high index of suspicion and prompt recognition are essential. 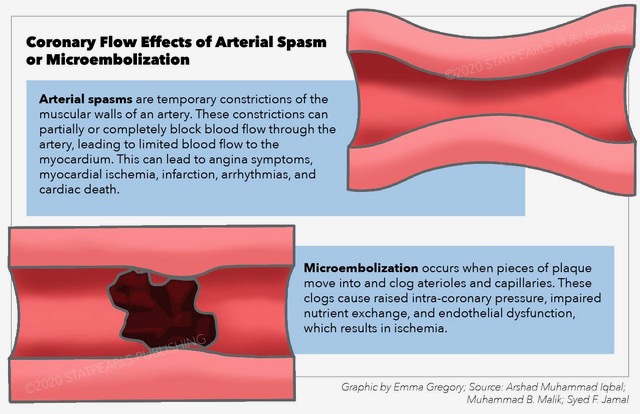