Desipramine is a secondary amine tricyclic antidepressant that is FDA approved for the treatment of depression. This drug has off-label use to treat bulimia nervosa, irritable bowel syndrome, neuropathic pain, overactive bladder, post-herpetic neuralgia, and ADHD. This activity reviews the current applications, pharmacology, and toxicities of desipramine and highlights the role of the interprofessional team, improving care for patients on this medication.

Desipramine is a secondary amine tricyclic antidepressant that is FDA approved for the treatment of depression. It is not considered the first line for depression due to the several adverse effects of this drug. This drug has off-label use in the treatment of bulimia nervosa, irritable bowel syndrome, neuropathic pain, overactive bladder, postherpetic neuralgia, and ADHD. Efficacy of desipramine can be established within the first two weeks of treatment of bulimia nervosa patients. The data showing this came from a study of 77 patients plotted on a receiver operating character curve examining the relationship between time and symptom reduction. Alleviation of symptoms in irritable bowel syndrome and neuropathic pain is accomplished by the antinociceptive properties of desipramine. Desipramine has demonstrated therapeutic antinociceptive benefits, most likely via its influence of norepinephrine. In addition to patients with simple overactive bladder, desipramine was found to be useful in patients with complex overactive bladder caused by pelvic radiation and overactive bladder with pain. Desipramine is one of the established first-line drugs in treating postherpetic neuralgia; however, clinicians are often inclined to use second-line medications such as gabapentin due to its toxic profile. Desipramine has shown mild effectiveness in the treatment of ADHD.[1][2][3]

Currently, the most widely accepted theory of desipramine’s mechanism of action is that it blocks the reuptake of norepinephrine and serotonin in the presynaptic neuronal membrane. Researchers have proposed secondary amine tricycle antidepressants such as desipramine to have greater norepinephrine blockade compared to that of tertiary amine tricyclic antidepressants, which have greater blockade at serotonin receptors. Reuptake blockade increases the available neurotransmitter level in the synapse. Antinociceptive effects of desipramine appear to occur via manipulation of norepinephrine. In addition to these mechanisms, desipramine appears to downregulate beta-adrenergic receptors and serotonin receptors. It also proposed to have alpha-1 blocking, antihistamine, and anticholinergic effects as well.[4][5][6][7]

For the off-label indication of REM sleep behavior disorder, dosing is 50 mg orally at bedtime, to be tapered gradually to discontinuation.[8]

Desipramine has a broad toxic profile, including an increased risk for suicide, orthostatic hypotension, cardiac abnormalities, seizures, ocular crisis, and fractures. A short-term study showed a significantly increased risk of suicide in children, adolescents, and young adults ages 24 and younger; this is one of the most significant adverse effects to consider when prescribing desipramine. Orthostatic hypotension, likely due to blockade of alpha one receptors, is a common reason for discontinuation of this drug. There are reports of cardiovascular side effects such as heart block, arrhythmias, and sudden death with this drug. Screening for conduction disease with particular attention to QT interval and the history of cardiac disease within the family is a strong recommendation before the prescription.[9]

Anticholinergic properties lead to side effects such as blurred visions, constipation, tachycardia, confusion, dry mouth, urinary retention, delirium, and the ocular crisis in patients with narrow-angle glaucoma. A recent study shows an increased risk for dementia due to the anticholinergic properties of this drug and that this risk is additive with other drugs that have anticholinergic properties. There is an increased risk of osteoporotic fracture with desipramine and all other antidepressants. Osteoblasts, osteocytes, and osteoclasts all have serotonin receptors, indicating a relationship between the neuroendocrine system and bone. The seizure threshold seems to decrease.

Other side effects include acute hepatitis, bone marrow toxicity, sexual dysfunction, seizures, sedation, tremors, and diaphoresis. Diaphoresis may be the result of noradrenergic receptor manipulation. With sexual dysfunction, there have been reports of impaired arousal and orgasms likely due to serotonergic effects. Although less sedating compared to other tricyclics, desipramine’s antihistaminic properties lead to sedation. Relative to the drug class of tricyclic antidepressants, desipramine is the least likely to cause the side effects listed.[10][11]

This medication is contraindicated in patients that have used monoamine oxidase inhibitors within the last 14 days to avoid serotonin syndrome. Such contraindicated drugs include tranylcypromine, phenelzine, isocarboxazid, selegiline, intravenous methylene blue, and linezolid. Desipramine is also contraindicated in the acute recovery period following myocardial infarction. This drug should not be used in those who have had prior hypersensitivity to the drug. Having cross-sensitivity between this drug and other dibenzazepine drugs is possible.

The optimal range is not yet established with this drug, but some studies site the range is between 50 ng/ml to 300 ng/ml. A dose of 115 ng/ml showed to be an important median in another research study showing efficacy in elderly melancholic patients. Patients below 115 ng/ml tended to not respond to treatment. Researchers reached a similar conclusion in younger patient populations with the same median. Treatment with this drug requires a minimum of 2 to 3 weeks to see the full effect. Desipramine is metabolized in the liver and requires monitoring for possible under-metabolism or over-metabolism with other drugs that metabolize in the liver, such as cimetidine.

Another critical point is to watch for worsening depression or the emergence of suicidal ideas during the initial period of taking this medication in patients under 24. The consensus is that antidepressants will precipitate a manic or mixed episode in a bipolar patient. Extreme precautions should be taken in patients with cardiovascular disease due to conduction defects, tachycardia, stroke, and acute myocardial infarction. Patients with a family history of sudden death, cardiac dysrhythmia, or cardiac conduction distances should have close monitoring. Widening of the QRS complex greater than 100 msec is a common indicator of toxicity. The patient's renal function requires assessment because desipramine excretion is primarily in the urine. Although bone marrow suppression and acute hepatitis are adverse side effects of this drug, there is no need to monitor these situations in the absence of history or symptoms. Antidepressant discontinuation syndrome may occur if you abruptly discontinue desipramine. This syndrome consists of mild flu-like symptoms that can last up to 2 weeks.[12]

Additional symptoms include insomnia, nausea, dizziness, gastrointestinal complaints, imbalance, sensory disturbances, and hyperarousal. These symptoms can emerge hours to days after discontinuing this drug and are immediately relieved by the reestablishment of antidepressant therapy. Suspicion of this syndrome should lead to questions about the patient's medication regime or any scheduling where they skip days of treatment. To stop desipramine should slowly taper over weeks to months to avoid antidepressant discontinuation syndrome.[13]

Desipramine has resulted in a higher death rate compared to other tricyclic antidepressants. An overdose of this drug results in cardiac dysrhythmia, critical hypotension, convulsions, becoming comatose, convulsions, hyperactive reflexes, stupid, drowsiness, hypothermia, and confusion. Serotonin syndrome occurs due to excessive serotonin often causes but a mixture of antidepressants and MAOIs. Serotonin syndrome signs and symptoms include hyperthermia, agitation, dilated pupils, dilated pupils, tremors, akathisia, muscle rigidity, increased bowel sounds, flushed skin, and diaphoresis. First-line treatment for acute toxicity is supportive care, serum alkalization, ECG, and gastric decontamination. Observation must be for at least 6 hours for unexplained syncope, shortness of breath, palpitations, and chest pain. Gastrointestinal decontamination should be initiated via activated charcoal as soon as possible. Emesis is contraindicated with the toxicity of desipramine. In patients with serotonin syndrome, management consists of supportive care and serotonin antagonists.[13]

Desipramine was once widely used to manage several mental health disorders. However, because of its toxicity and adverse effects, it is seldom used often today. But any healthcare professional who prescribes it must be fully aware of its side effect profile. Patients should have education on the side effects and the need to store the drug away from children, a conversation that can be reinforced by the nursing staff and pharmacist. 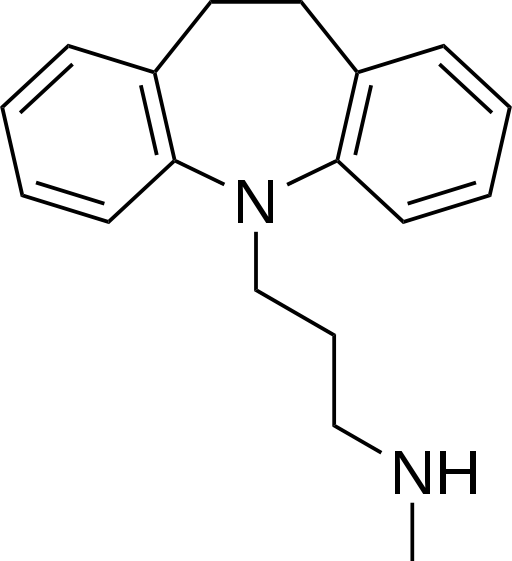 Jaffuel D,Mallet JP,Dauvilliers Y,Bourdin A, Is the Muscle the Only Potential Target of Desipramine in Obstructive Sleep Apnea Syndrome? American journal of respiratory and critical care medicine. 2017 Jun 15;     [PubMed PMID: 28186828]

Thapa M,Petrakis I,Ralevski E, A Comparison of Sexual Side Effects of Antidepressants With and Without Naltrexone. Journal of dual diagnosis. 2017 Jul-Sep;     [PubMed PMID: 28481169]