Dandy-Walker malformation (DWM) or syndrome is a posterior fossa anomaly characterized by agenesis or hypoplasia of the vermis and cystic enlargement of the fourth ventricle causing upward displacement of tentorium and torcula. Most patients have hydrocephalus at the time of diagnosis. DMW is the most common posterior fossa malformation, and it typically occurs sporadically. This activity reviews the presentation of Dandy-Walker malformation and highlights the role of the interprofessional team in its management.

Dandy-Walker malformation (DWM) or syndrome is a posterior fossa anomaly characterized by agenesis or hypoplasia of the vermis and cystic enlargement of the fourth ventricle causing upward displacement of tentorium and torcula.[1][2][3] Most patients have hydrocephalus at the time of diagnosis.[4] DMW is the most common posterior fossa malformation, and it typically occurs sporadically.[5]

Many patients remain clinically asymptomatic for years, while others may present with a variety of comorbidities leading to earlier diagnosis.[6] Treatment is generally focused on alleviating hydrocephalus and posterior fossa symptoms, often including surgical interventions like ventriculoperitoneal and cystoperitoneal shunting.[4][7]

Historically, DWM was believed to be caused by atresia of the Luschka and Magendie foramina, leading to enlargement of the fourth ventricle and vermian hypoplasia. However, recent evidence suggests that DWM results from developmental abnormalities affecting the roof of the rhombencephalon, leading to variable degrees of vermian hypoplasia and cystic enlargement. This complex malformation may initiate by two different pathophysiological mechanisms: the arrest of vermian development, and failure of fourth ventricle foramina fenestration leading to an enlarged Blake’s pouch and causing compression of the vermis.[8]

Rare mutations have been described in some genes including FOXC1, FGF17, LAMC1, NID1, ZIC1, and ZIC4.[5]

DWM and related variants have a prevalence of 1 in 35000 live births in the United States. These malformations account for approximately 1 to 4% of hydrocephalus cases.[1][3]

Some institutions have an estimated mortality rate of 12 to 50%.[1] Treatment of hydrocephalus with shunting substantially improves mortality.[9] Fetal mortality directly correlates with the presence of extra-CNS abnormalities.[10]

The majority of cases are sporadic. However, some may result from chromosomal aneuploidy, Mendelian disorders, and environmental exposures, including congenital rubella and fetal alcohol exposure.[6]

The clinical presentation is nonspecific, subject to multiple factors including the severity of hydrocephalus, intracranial hypertension, and associated comorbidities.[1] Most patients will present in their first year of life,  with signs and symptoms of increased intracranial pressure.[4][5][9] The most common manifestation is macrocephaly, affecting 90 to 100% of patients during their first months of life.[5] The syndromic form of DMW may also have malformations of the heart, face, limbs and gastrointestinal or genitourinary system that could draw the initial medical attention.[6]

A case series of 42 patients with DWM, showed hydrocephaly in all patients at the time of diagnosis, vermian hypoplasia in 88%, and cerebellar hypoplasia in 59%.[4]

Ultrasound is typically the first imaging modality in assessing fetal brain. CNS Structures evaluated through this modality should include head size and shape, choroid plexus, thalami, cerebellum, cavum septum pellucidum,  lateral ventricles, nuchal fold, cisterna magna, and spine. Imaging may also demonstrate other CNS abnormalities which commonly correlate with DWM. Measurement of the cisterna magna forms part of the ultrasound evaluation of the fetal brain. A case series showed an upper limit of normal of 10 mm, and a mean size of 5 plus or minus 3 mm at 15 or more gestational weeks. A prominent cisterna magna during prenatal fetal ultrasound evaluation may raise concern for congenital posterior fossa abnormalities. However, as an isolated finding, a prominent cisterna magna is unlikely to be clinically significant if the patient presents no other abnormalities.[11]

Like ultrasound, magnetic resonance imaging (MRI) is more helpful after the 20th week of gestation, and it may aid in the evaluation of CNS malformations not satisfactorily described by ultrasound, or to search for commonly associated abnormalities.[3][12][13]

Prenatal diagnosis by ultrasound is possible after the 18th week of gestation when the cerebellar vermis has completely developed. Diagnosis may be confirmed by magnetic resonance.[12] For patients with dandy walker variant (DWV) discrepancies may be found in prenatal and postnatal imaging based on the variation of vermian development.[13] Magnetic resonance will also help in distinguishing DWM from other posterior fossa lesions.[3]

Karyotype and postnatal imaging should be offered for all patients with prenatal imaging findings consistent with DWM to confirm findings and search for other possibly associated abnormalities.[10][13]

Measurement of the brainstem-vermian (BV) angle and brainstem-tentorium (BT) angle substantially help in the differential diagnosis of patients with an increased size of the cisterna magna. The BV angle increases with the severity of the condition. Angles below 18 degrees rate as normal, while 18 to 30 suggest Blake’s pouch malformation. Angles greater than 45 are strongly suggestive of DWM.[14]

Treatment consists of treating the manifestations and associated comorbidities. Most patients present with signs and symptoms from increased intracranial pressure, most commonly related to hydrocephalus and posterior fossa cyst. For this reason, therapy generally aims to control intracranial pressure, usually through surgery.[3]

Surgical treatment may include ventriculoperitoneal (VP), or cystoperitoneal (CP) shunts. Other patients may be candidates for endoscopic procedures, including endoscopic third ventriculostomy (ETV).[15]

Retrocerebellar arachnoid cysts may be large enough to cause compression of cerebellar hemispheres and fourth ventricle.[3]

Blake’s cyst presents as a retrocerebellar fluid collection, with a medial line communication to the fourth ventricle.[3]

Mega cisterna magna. However, the fluid collection is located posteroinferior to a normally developed cerebellum.[3]

Most case series of patients with non-tumoral hydrocephalus, present an overall risk for epilepsy of approximately 30%.[16]

Functional outcome is subject to several factors, which include other structural brain abnormalities, extra-CNS manifestations, epilepsy, motor, visual or hearing impairment, and other congenital abnormalities.[18][19]

Sixteen percent of patients with isolated DWM have chromosomal abnormalities.[20] DWM may be associated with malformations of the face, limbs, heart, and genitourinary or gastrointestinal system.

The most common complications associated with shunting are infection and shunt malfunction.[9]

The cerebellar vermis development varies between individual and usually complete its formation late in the first half of pregnancy. Some fetuses may achieve vermis development around gestational week 18. Therefore, the diagnosis of DWM based on imaging done before the 16th to 18th week of development may be premature and erroneous. Additionally, during the first half of pregnancy, the cisterna magna has not reached its final anatomy. A relatively wide opening in the cerebellomedullary cistern may not be indicative of vermian dysgenesis at that stage of development. Therefore, the cerebellum should be reevaluated at 20 to 22 postmenstrual weeks to rule out vermian abnormalities.[21]

Karyotype and comprehensive fetal ultrasound should be offered for patients with features of the Dandy-Walker complex.[13]

In the absence of other lesions in the posterior fossa, an isolated prominent cisterna magna may not be clinically significant.[11]

Pediatric healthcare providers should be familiar with the broad spectrum of congenital posterior fossa abnormalities to provide an accurate diagnosis, optimal therapy, and genetic counseling.[21]

Additionally, posterior fossa imaging findings will change based on the gestational age, as such, findings suggestive of disease in earlier weeks, should be reevaluated at postmenstrual weeks 20 to 22.[11] 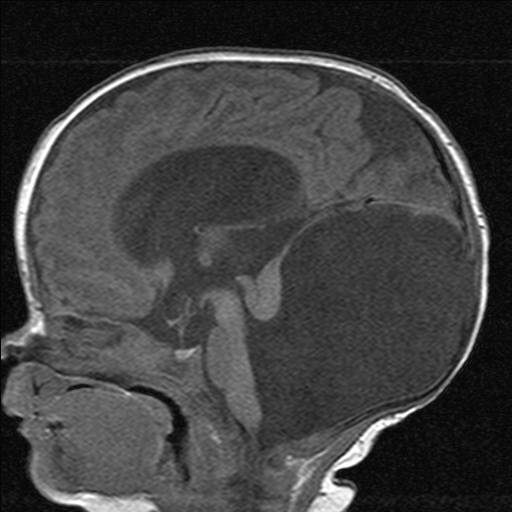 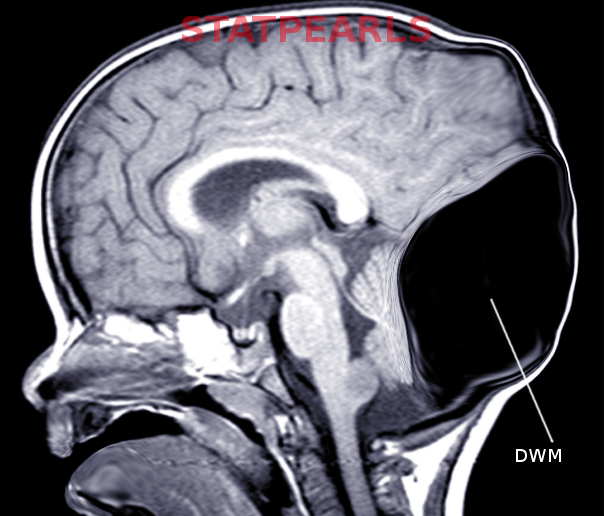