Crouzon syndrome is a genetically inherited syndrome characterized by craniosynostosis (premature fusion of coronal sutures) resulting in the skull and facial deformities. The syndrome was first described in 1912 by French physician Octave Crouzon when he identified both a mother and daughter with what was originally called “craniofacial dysostosis.” He described a triad of skull deformities, facial anomalies, and proptosis. This triad of findings was then re-labeled “Crouzon syndrome.” The syndrome’s genetic and molecular basis has since been identified and will be discussed. The syndrome is one of many craniosynostosis syndromes and is considered to be the mildest form of them. This activity reviews the workup of Crouzon syndrome and describes the role of health professionals working together to manage this condition.

Crouzon syndrome is a genetically inherited syndrome characterized by craniosynostosis (premature fusion of coronal sutures) resulting in the skull and facial deformities. The syndrome was first described in 1912 by French physician Octave Crouzon when he identified both a mother and daughter with what was originally called “craniofacial dysostosis.” He described a triad of skull deformities, facial anomalies, and proptosis. This triad of findings was then re-labeled “Crouzon syndrome.” The syndrome’s genetic and molecular basis has since been identified and will be discussed in more detail below. The syndrome is one of many craniosynostosis syndromes and is considered to be the mildest form of them.

Crouzon syndrome is inherited in an autosomal dominant pattern and is caused by a mutation in the fibroblast growth factor receptor (FGFR)-2 and -3 on chromosome 10.[1][2]  The syndrome has complete penetrance but variable expressivity resulting in phenotypically unaffected to severe deformities within the same family. In approximately 50% of cases, the mutation is the result of de novo mutations.[3]

Crouzon syndrome is a fairly rare entity and is estimated to occur in 1 in 60,000 newborns; however, it is the second most common craniosynostosis syndrome behind only the more recently described Muenke syndrome.[4][5]

FGFR-2 and FGFR-3 are two of the four transmembrane protein receptors responsible for osteoblast differentiation during embryological development. Missense mutations in these two receptors result in gain-of-function signaling and subsequent acceleration in the differentiation of osteoblasts.[6][7] A detailed discussion of these receptors and their downstream signaling can be found in Azoury et al., 2017.[8] This process results in the premature fusion of sutures. The complexity of which and why a specific suture is involved is not currently known. Depending on the sutures involved, different, abnormal patterns of growth of the skull can occur. In Crouzon syndrome brachycephaly (widened and shortened) is the most common presentation due to bi-coronal suture fusion. However, trigonocephaly (triangular) and scaphocephaly (long and narrow) are not uncommon. In the most severe cases, a “cloverleaf” skull known as a Kleeblattschadel deformity can be seen due to the closure of multiple sutures.[9]

Due to the autosomal inheritance pattern, family history is an important component of the history and physical. The clinical course of worsening of facial deformities over the first 1 to 2 years of life helps make the clinical diagnosis. Additional testing is usually not needed to make the diagnosis. As a genetic disease, the rest of the history of the newborn infant is unlikely to contribute much more to identifying the underlying diagnosis.

Crouzon syndrome is usually suspected at birth due to specific facial and cranial deformities and positive family history. There are several characteristic features of patients with Crouzon syndrome that can be seen on physical examination. The most commonly seen include brachycephaly, wide-set (hypertelorism), bulging eyes (proptosis), a flattened forehead, a beaked nose, and an underdeveloped upper jaw (maxillary/midface hypoplasia) that defines the Crouzonoid face. These patients can also suffer from a cleft lip and/or palate, hearing loss, and dental problems. The incidence of strabismus (misaligned eyes) is very high. An important detail to note is the normal hands and feet found in a Crouzon patient in contrast to those with Apert syndrome, a similar but more severe craniosynostosis syndrome, where there is pronounced syndactyly of the extremities. Pfeiffer syndrome, another craniosynostosis, is also epitomized by short, broad big toes and thumbs in contrast to the previously mentioned normal digits of those with Crouzon syndrome.[4][10]

The evaluation for Crouzon syndrome is relatively straightforward in the setting of known family history as the characteristic physical examination findings confirm the diagnosis. However, in cases where there is a spontaneous mutation, and the clinical presentation is not clear initially, these patients may require genetic testing for diagnosis. Additional tests in these situations may include imaging techniques such as magnetic resonance imaging (MRI) and computed tomographic (CT) imaging of the brain to detect craniosynostosis or other skeletal abnormalities. The most common imaging findings on X-ray-based techniques are perisutural sclerosis, reduced serration, and bony bridging and/or the absence of the suture altogether.[11] A beaten bronze appearance of the skull is also a common finding on CT in this syndrome due to multiple radiolucencies of the skull bones. These imaging modalities can also help identify sequelae of the syndrome such as radiographic findings suggestive of increased intracranial pressure that may be otherwise difficult to detect in uncooperative children.

If the history, physical, and imaging are still not conclusive, molecular testing can be pursued. Unfortunately, multiple craniosynostosis syndromes have a defect in one of the FGFRs; therefore, there is some overlap even in their molecular pathophysiology.[8] For those patients that have a family history of Crouzon or one of the other craniosynostosis syndromes, prenatal genetic testing and 2-dimensional and 3-dimensional ultrasounds can be utilized to confirm the diagnosis before the birth of the child.[8] In high-risk pregnancies, amniocentesis and/or chorionic villus sampling can be performed, but a detailed dialogue of risks and benefits must be discussed with the parents before proceeding.

While not all required, the combination of detailed family history, specific physical examination findings, the use of various imaging modalities, and genetic testing help differentiate the spectrum of craniosynostosis syndromes (Pfeiffer, Apert, Saethre-Chotzen, Carpenter, and Jackson-Weiss syndromes) in which signs and symptoms can have significant overlap.

The management of any patient with craniosynostosis is complex and requires a team of subspecialists including pediatricians, oral maxillofacial surgeons, plastic surgeons, neurosurgeons, otorhinolaryngology (ENT) specialists, and ophthalmologists (pediatric and oculoplastics).  Other specialists may be required depending on the specific issues at hand. Surgical management is the treatment modality of choice to correct the maldevelopment of the midface and orbits to prevent blindness and intellectual disability related to the restriction of the brain and orbital development. A detailed review of surgical techniques including the timing of repair can be seen in a recent review of the topic.[12] Most craniofacial surgeons currently feel that single suture craniosynostosis can be repaired with only one surgery, while multiple suture craniosynostoses require a staged approach to coincide with facial growth patterns. If the cranial vault abnormalities are corrected, patients with Crouzon syndrome will have normal cognitive function, vision, hearing, and lifespans. Fortunately, not all patients will require surgery, so a team-based approach to monitoring for the development of complications related to the syndrome is necessary that would warrant intervention. The overall prognosis depends on the severity of malformations and when they were corrected. Earlier correction (prior to 1 year of age) anecdotally minimizes cognitive disabilities, airway obstructions, and decreased visual acuity and results in better outcomes.[13]

It requires long-term followup to monitor ocular development due to the propensity to develop strabismic amblyopia and the need for strabismus surgery. These examinations should also monitor for optic nerve edema that would raise concerns for elevated intracranial pressure. Due to airway changes, sleep apnea is also of concern. The previously mentioned team-based approach helps monitor for these vision and life-threatening complications.

There is some ongoing work investigating the role of tyrosine kinase inhibitors in mutated FGFR-related craniosynostosis conditions.[14] Unfortunately, these studies have not been tested in humans, and are likely years away from clinical use.

The prognosis of patients with Crouzon syndrome depends on early diagnosis and treatment. If treated promptly, the patients may have a near-normal lifespan.

The parents of the patient should be counseled about the child's condition and the expected prognosis. They should understand that they could not have done anything before or during pregnancy to prevent the birth of a baby with this condition. Genetic evaluation should be offered to the parents.

The management of craniosynostosis is complex and difficult and requires a team of subspecialists including pediatricians, oral maxillofacial surgeons, plastic surgeons, neurosurgeons, otorhinolaryngology (ENT) specialists, and ophthalmologists (pediatric and oculoplastics). The nurses involved need to be specially trained to assist in recognizing complications and educating the families. an interprofessional team approach will provide the best patient outcomes. [Level V] 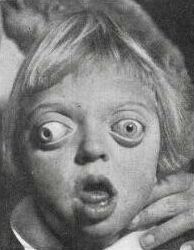 Mathijssen IM, Guideline for Care of Patients With the Diagnoses of Craniosynostosis: Working Group on Craniosynostosis. The Journal of craniofacial surgery. 2015 Sep     [PubMed PMID: 26355968]

Snyder-Warwick AK,Perlyn CA,Pan J,Yu K,Zhang L,Ornitz DM, Analysis of a gain-of-function FGFR2 Crouzon mutation provides evidence of loss of function activity in the etiology of cleft palate. Proceedings of the National Academy of Sciences of the United States of America. 2010 Feb 9     [PubMed PMID: 20133659]