The cingulate cortex is a fascinating area of the human brain that has attracted a lot of recent attention. It resides within the medial surface of the cerebral hemisphere and is perhaps most well known as being part of the limbic system. It is involved in many vital neural circuits, which include other structures such as reward centers, amygdala, lateral prefrontal cortex, parietal cortex, motor areas, spinal cord, hippocampus, and limbic regions. Although previously viewed as a mysterious territory of the brain, evidence from cognitive and fMRI studies has established a better understanding of the cingulate cortex in the last decade. Its functional role continues to be heavily studied to this day. In the following sections, we shed more light on the cingulate cortical structure, function, and clinical and surgical significance.

The PCC houses BA 23, 29, 30, and 31. The thick granular layer IV of the PCC marks a clear histologic distinction from the thin agranular layer IV of the ACC. The PCC consists of the posterior cingulate cortex proper (ventral and dorsal PCC) which are responsible for visuospatial orientation. Although contained within the PCC, the retrosplenial cortex is considered a distinct region of the cingulate cortex. It is implicated in imagination and the formation and consolidation of episodic memory.[4][5]

As seen from the extensive neural pathways it shares with other brain regions, the cingulate cortex can be considered, in a sense, a connecting hub of emotions, sensation, and action. Some of these pathways are those involved in motivational processing, which is apparent through the connections with the orbitofrontal cortex, basal ganglia, and insula, which together make up the reward centers of the brain. Also, the cingulate cortex projects pathways to the lateral prefrontal cortex which is involved in executive control, working memory, and learning. Pathways between the cingulate cortex and motor areas like the primary and supplementary motor cortices, spinal cord, and frontal eye fields, suggest an important role in motor control. Moreover, the cingulate cortex, frontal and parietal lobes comprise a neural network for orienting attention, and expectedly, injury to any of these areas is known to cause hemineglect. The neural circuits cingulate cortex shares with the hippocampus and amygdala suggest a role in consolidating long-term memories and processing emotionally relevant stimuli, respectively.[6]

During embryonic development, the prosencephalon (forebrain) gives rise to the telencephalon and diencephalon at around week 6. The telencephalon differentiates into the two cerebral hemispheres which include the cingulate gyrus on their medial surface.

Some of the normal anatomic variations of the cingulate gyrus include a single cingulate sulcus or double parallel cingulate sulci. MRI-volumetric studies on normal brains showed no significant volume asymmetries between the left and right hemispheres, except in the cingulate gyrus which was bigger on the left.[1] Pujol et al. studied the brains of 100 healthy subjects and found larger right ACC to be more frequent in females compared to males. Interestingly, subjects with a larger right ACC had more worrisome personalities, greater fear in the face of uncertainty, and shyness around strangers.[8]

A bilateral cingulotomy is a type of psychosurgery which involves stereotactic ablation of the anterior cingulate gyrus, which severs the supracallosal fibers of the cingulum. It is commonly used to treat chronic pain refractory to medications, as in patients with metastatic cancer. This procedure is thought to reduce the unpleasant perception of pain, rather than eliminate the pain itself. Other applications of bilateral cingulotomy include treatment of major depression and obsessive-compulsive disorder. 10-30% of cases report blunted affect after surgery.[9][10]

The most common brain herniation syndrome is subfalcine herniation. Raised intracranial pressure, for example, due to hematoma or tumor, pushes the brain hemisphere to the opposite forcing the cingulate gyrus beneath the free edge of the falx cerebri. Although it does not usually produce severe symptomatology, if subfalcine herniation progresses it can be further complicated by compression of the anterior cerebral artery against the falx, resulting in an ipsilateral ACA stroke which can manifest as contralateral leg weakness.[11]

Given the complexity of higher cognitive functions and the extensive connections of the cingulate cortex with other brain regions, it is not surprising that it plays a role in the pathogenesis of schizophrenia. In particular, the ACC is one of the brain areas which shows abnormalities in schizophrenic patients when compared to healthy subjects. These anomalies include reduced cortical grey matter, decreased gyral volume, and disrupted neuronal arrangement.[12][13][14] 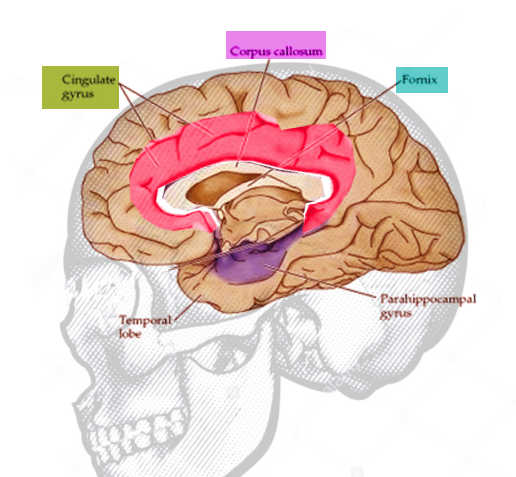 Hayden BY,Platt ML, Neurons in anterior cingulate cortex multiplex information about reward and action. The Journal of neuroscience : the official journal of the Society for Neuroscience. 2010 Mar 3     [PubMed PMID: 20203193]

Cilliers K,Page BJ, Review of the Anatomy of the Distal Anterior Cerebral Artery and Its Anomalies. Turkish neurosurgery. 2016     [PubMed PMID: 27337235]

Benes FM,Bird ED, An analysis of the arrangement of neurons in the cingulate cortex of schizophrenic patients. Archives of general psychiatry. 1987 Jul     [PubMed PMID: 3606326]