Chromoblastomycosis is a chronic granulomatous infection of the skin and subcutaneous tissue caused by several different dematiaceous fungi and resulting in the formation of slow-growing warty plaques and cauliflower-like lesions which may ulcerate. The fungi produce thick-walled, single or multicellular clusters called sclerotic or muriform bodies, respectively. The fungi are usually introduced into the body by trauma, and the lesions are mostly found on exposed regions of the body. The disease runs a chronic course and most cases can be cured. This activity reviews the clinical evaluation of chromoblastomycosis and the role of the health professional team in providing appropriate care to affected patients.

Chromoblastomycosis is a chronic granulomatous infection of the skin and subcutaneous tissue caused by several different dematiaceous fungi (brown pigment-producing), resulting in the formation of slow-growing, warty plaques, cauliflower-like lesions which may ulcerate. The fungi produce thick-walled, single, or multicelled clusters ( sclerotic or muriform bodies). The fungi are introduced into the body usually by trauma, and hence, the lesions mostly present on exposed parts of the body. The disease runs a chronic course, and most cases are treatable to the point of cure.[1]

A large number of fungi can cause the disease. They are dematiaceous, i.e., producing brown pigment. The most common fungi are Cladosporium carrionii, Phialophora verrucosa, and Fonsecaea pedrosoi. Less common pathogens are Fonsacea compactum, Exophiala spinifera, Rhinocladiella aquaspersa, Exophiala jeanselmei, and Wangiella dermatitidis. The fungi have been isolated from wood and soil and enter the body following trauma. The condition is common in rural communities.[1] Cladosporium carrionii reproduces by fission. It produces multiple conidia in long, straight chains that bud off the hyphae, with the youngest conidia farthest from the hyphae.

The disease occurs throughout the world, including Central, South and North America, Cuba, Jamaica, Martinique, India, South Africa, Madagascar, Australia, and northern Europe. It is much more common in the tropics and subtropics. It is more common in agricultural workers. Adult male agricultural workers are most often affected, but the condition also has been reported in children.[2]

The fungi enter the skin following trauma, evoking a granulomatous response. The epidermis shows pseudoepitheliomatous hyperplasia. In the dermis, a granuloma composed of epithelioid cells and Langhans giant cells is visible. The fungal elements ae visible as sclerotic bodies, which are brown septate cells. The sclerotic bodies (medlar bodies/ muriform bodies/copper pennies) are extruded transepidermally, and they appear as black dots on the surface of the lesion; this is characteristic of chromoblastomycosis.[3]

The histology is that of a foreign-body granuloma with isolated areas of microabscess formation. In the organized granuloma, mainly within giant cells, groups of fungal cells may be seen. They are chestnut or golden brown, and therefore can be easily distinguished in the infiltrate. The cells characteristically divide into several planes of division by thick septa and are termed muriform or sclerotic cells. There is marked pseudoepitheliomatous hyperplasia of the epidermis. In some areas, apparent transepidermal elimination of fungal cells, which are in the stratum corneum The tissue between the granulomatous nodules shows chronic fibrosis. When ulceration has occurred, there is usually a secondary bacterial infection.[3]

Usually, the disease will remain localized with slow peripheral extension. There can be central scarring. The early lesion can occasionally be an ulcer.  After months or many years, large hyperkeratotic masses have formed. They can be as large as 3 cm thick. Secondary ulceration can occur; however, the lesion is usually painless. Satellite lesions result from scratching. In some cases, there can be lymphatic spread resulting in the sporotrichoid pattern. Hematogenous dissemination is very rare, but brain abscesses can occur.[4] The secondary infection eventually may lead to lymphatic stasis and the production of elephantiasis. Some forms may develop psoriasiform lesions. Squamous cell carcinoma may develop in chronic cases.[5]

Usually, following trauma, a small warty papule appears. It enlarges very slowly to form a thick, hypertrophic, verrucous plaque. The lesion is, by and large, asymptomatic, though some patients may complain of occasional itching. Black dots (sclerotic bodies) will be present on the surface of the plaque. These are fungal bodies eliminated transepidermally. They are usually solitary, but a few small lesions may also appear in the periphery. These peripheral lesions are more common when there is itching. In some lesions, the plaque is flat and expands slowly with central scarring. The lesion is usually painless but can be painful in the presence of secondary infection. There can be lymphatic spread to adjacent areas.[5]

Scraping from the surface of the lesion will show sclerotic bodies. They are brownish septate cells seen singly or in clusters. The surface is scraped, and 10% potassium hydroxide (KOH) is added to the scrapings, which the examiner then viewed under the microscope.

Histopathology will show pseudoepitheliomatous hyperplasia of the epidermis. The dermis shows granuloma composed of epithelioid cells and Langhans giant cells. There can be collections of eosinophils, lymphocytes, and plasma cells. Within the giant cells and also free in the tissue, dark brown thick-walled ovoid or spheric spores (sclerotic bodies/medlar bodies/copper pennies) are visible. In culture, the colonies of all species are dark grey-green to black and velvety or downy with a black reverse. Three forms of conidial production exist; acropetal budding, production of phialides, and sympodial conidiation.[3]

Single small lesions are excisable, followed by antifungal therapy. If surgery is not feasible, oral antifungals alone are an option. The antifungal drugs of choice are; itraconazole 200 to 400 mg/day or terbinafine, 250 to 500 mg/day given for a period varying from 6 months to a year or more. Flucytosine alone or combined with amphotericin also may be effective. Oral supersaturated potassium iodide solution is another choice. Other approaches to treatment are cryotherapy or local application of heat.[3]

In the differential diagnoses, other verrucous lesions like tuberculosis verrucosa cutis, verruca vulgaris, blastomycosis, leishmaniasis, syphilis, yaws verrucous hemangioma, hypertrophic lichen planus, and lupus vulgaris merit consideration. In the sporotrichoid type in which linear lesions occur, sporotrichosis is a very close differential diagnosis. The presence of black dots on the surface, which are due to the transepidermal elimination of fungal elements, is the most important differentiating feature from other conditions. The black dots can be scraped preferentially from the surface and viewed under the microscope after adding 10% KOH.[6]

The disease is treatable at the point of cure. Early intervention will yield better results with little morbidity. Long-standing cases that are over joints and with lymphatic involvement have relatively high morbidity. Disseminated disease, with the involvement of the central nervous system, has the worst prognosis. Prolonged treatment with hepatotoxic drugs is another factor that has to be a consideration. Best results are achievable in small lesions that are amenable to surgery and followed up with antifungal therapy.

The most common complications seen with chromoblastomycosis include ulceration, secondary bacterial infection, lymphedema resulting in elephantiasis, and myiasis. There have been rare, documented cases of malignant transformation of chromoblastomycosis (to squamous cell carcinoma).[7]

Patients need to receive reassurance that chondroblastomycosis is a generally benign condition that responds well to treatment is caught early. The patient needs to understand the importance of adherence to the anti-fungal regimen, as well as post-surgical wound care.[8]

Surgical treatment, though highly effective, may not be feasible due to lesions being present over joints. The duration of antifungal therapy is highly variable, and patient compliance can become a deciding factor.

Chromoblastomycosis is a rare fungal infection and is best managed by an interprofessional team that includes an infectious disease consultant, surgeon, emergency department physician, wound care nurse, and an internist. Chromoblastomycosis is a chronic granulomatous infection of the skin and subcutaneous tissue caused by several different dematiaceous fungi (brown pigment-producing), resulting in the formation of slow-growing, warty plaques, cauliflower-like lesions which may ulcerate.[9][10][11]

The diagnosis does require clinical suspicion. The prognosis depends on the size of the lesions and the immune status of the patient. The clinician can excise single small lesions followed by antifungal therapy. If surgery is not feasible, oral antifungals alone are an alternative approach.[3][12] [Level 5] 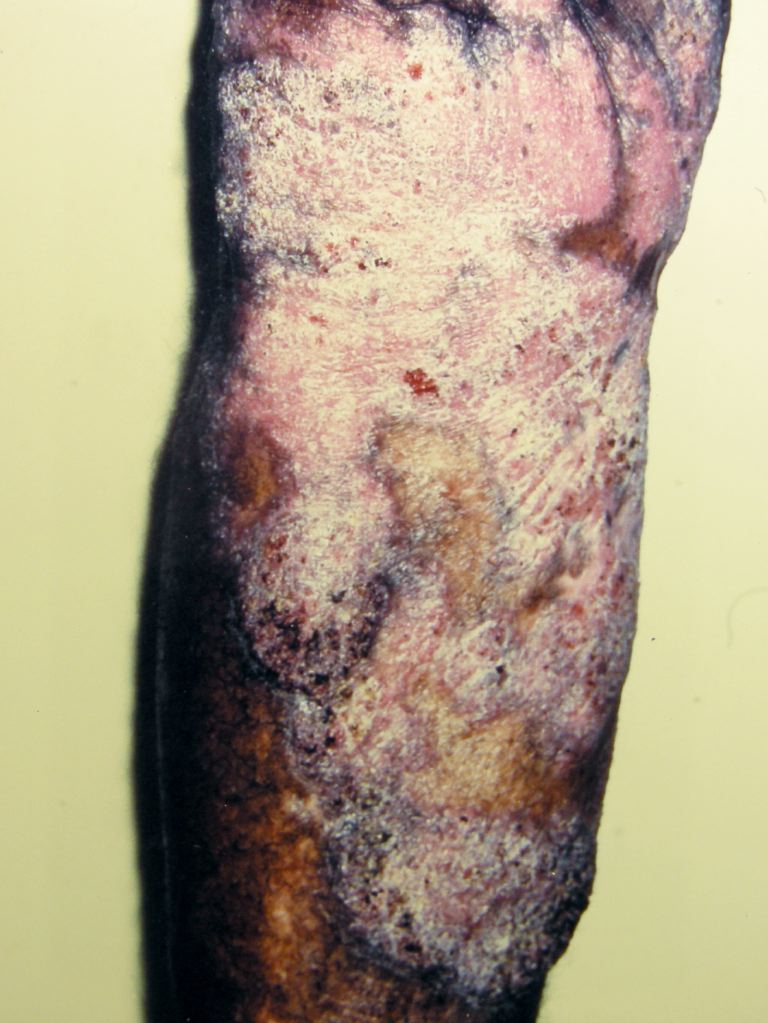 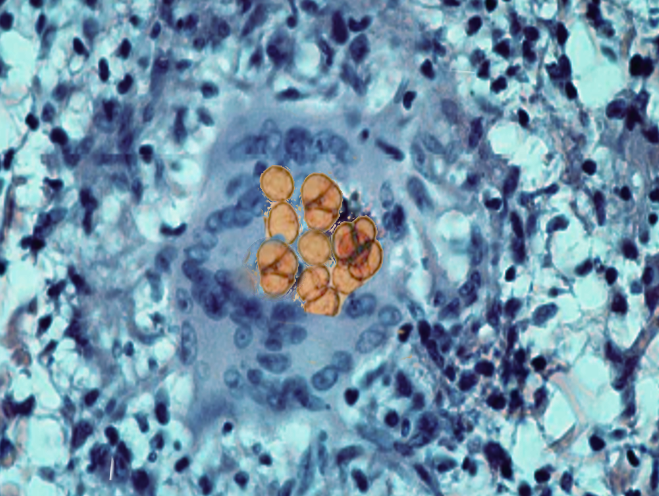