A cherry-red spot refers to a red-tinted region at the center of macula surrounded by retinal opacification. Cherry-red spots may be present in a variety of pathologic conditions, including lysosomal storage disorders, retinal ischemia, and retinal infarction. Ruling out serious life-threatening or sight-threatening diseases is of paramount importance in a patient with a cherry-red spot at the macula. This activity reviews the evaluation and management of patients with cherry-red spots. It highlights the role of interprofessional team members in collaborating to provide well-coordinated care and enhance patient outcomes.

The cherry-red spot refers to the reddish area at the center of macula surrounded by retinal opacification in certain disorders. The retinal opacification may be due to various causes, including accumulation of different materials in the ganglion cells in storage disorders, and retinal ischemia/infarction, as in central retinal arterial occlusion (CRAO).

Ruling out serious life-threatening or sight-threatening diseases is of paramount importance in a patient with a cherry-red spot at the macula. The management varies according to the cause.

The causes of the cherry-red spot include:

The association between Gaucher disease and the presence of a cherry-red spot in the macula is questionable.

A cherry-red spot at the macula is a rare finding, and the epidemiology depends on the cause. Tay-Sachs disease is estimated to affect 1 in 320000 newborns. The true epidemiology of central retinal arterial occlusion is unknown. A study estimated that acute central retinal arterial occlusion (duration less than 48 hours) affects approximately 0.85 per 100000 per year or 1.13 per 10000 outpatient visits.[12]

The macula is characterized histologically by an area with more than one layer of ganglion cell layers, and the ganglion cell layer is thick at the macula. In diseases causing loss of transparency (whitening or opacification) of the inner retina, the reddish color of the vascular choroid and pigmentation of retinal pigment epithelium (RPE) is not seen through the opacified retina. However, foveola is devoid of the inner retinal layer. The retinal layers present at the foveola are (from inside outwards)- internal limiting membrane, outer nuclear layer, external limiting membrane, photoreceptor layer, and RPE. Inner retinal layers are absent in mature foveola. The vascular supply of the fovea is from the choroid, and in the occlusion of retinal vessels, it does not get hampered. Thus foveola, the thinnest part of the central retina, does not lose its transparency in inner retinal ischemia.

As the color of choroid and RPE varies with racial variation, the color of foveola or the central dot may change according to race. A true cherry-red spot presents in whites. The color of foveola was brown, causing a cherry brown spot in a Canadian aboriginal child with Sandhoff disease and black in a patient of east Indian race creating a cherry black spot in Sandhoff disease.[13] Thus an alternate name of 'perifoveal white patch' has been suggested.[13]

Therefore for a cherry-red spot to be seen, the vascularity of choroid needs to be intact. In cases of ophthalmic artery occlusion, there is a compromise to the vascular supply to retina, choroid, and optic nerve head circulation. There is retinal opacification without a cherry-red spot and severe vision loss, which might cause no perception of light or inaccurate projection of rays.

The opacification of inner retinal may be due to:

Sphingolipidoses are disorders of lysosomal metabolism, which involve conjugated products of ceramide and sugar or phospholipids. Sphingolipidoses include gangliosidosis, Niemann-Pick disease, Farber disease, and metachromatic leukodystrophy.

Tay-Sachs disease demonstrates an accumulation of GM2 gangliosides in the brain, spinal cord, heart, liver, spleen, and ganglion cells of the retina. Typically, a ballooned appearance of the neurons is a feature that has vacuoles in the cytoplasm composed of distended lysosomes filled with gangliosides. Stain with oil red O or Sudan black B is positive. Electron microscopy reveals whorled deposits within the lysosome, which have a multilayered appearance like a cut section of an onion.

In CRAO, the early changes are ischemic changes and swelling of the inner retina, which is with time followed by thinning of inner retinal layers.

Central retinal artery occlusion usually presents with sudden onset vision loss in the elderly. Often, there is a relative afferent pupillary defect in the affected eye. The fundus examination reveals a whitened opaque retina at the posterior pole blocking the visibility of the choroidal vessels. The foveola remains transparent, giving rise to the cherry-red spot. Other features include fragmentation of blood column in retinal vessels ("box-carring"), which may be noted to move sluggishly on prolonged observation. An embolus within the central retinal artery or its branches may be present. In the late phase, retinal thinning, pigmentary changes at the fovea, and optic atrophy may occur.

In lipid storage disorders, there might be evidence of neurodegeneration and visceromegaly. In the early phase, there is a perifoveal white donut-like area around the fovea with a cherry-red spot appearance. In the late phase, there is atrophy of inner retinal layers, the disappearance of the cherry-red spot, and optic atrophy. Family history and examination of family members are of paramount importance.

Fundus fluorescein angiography (FFA) shows delayed arterial circulation, a slowly progressing front edge of the dye, and late filling of the retinal veins in central retinal artery occlusion. There may be an abrupt ending to the flow of the dye at the location of an embolus in the central retinal artery or its branches. In lipid storage disorders, FFA may show an area of hypofluorescence (block fluorescence) 360 degrees around the foveola.[14]

The management of a cherry-red spot depends on the cause.

For CRAO, the options for management when the present patients early include ocular massage, anterior chamber paracentesis, reduction of intraocular pressure by systemic and topical medications, hyperbaric oxygen therapy, and intraarterial thrombolysis. These acute measures may provide benefit, however, there is no clear evidence at this point that these measures improve the patient's final visual acuity.[18]

For various storage diseases, the management requires a team of various specialties. Generalized pearls for the management of such patients include avoiding/reducing intake of specific molecules, enzyme replacement therapy, and symptomatic management.

Ruling out serious life-threatening or sight-threatening diseases is of paramount importance in a patient with a cherry-red spot at the macula. The management varies according to the cause. When the nurse practitioner, primary care provider, or emergency department physician encounters patients with vision alterations, referral to an ophthalmologist is a strong recommendation. Given the variety of potential etiologies for this condition, an interprofessional team approach involving physicians and nursing professionals is the best way to ensure proper diagnosis and treatment for the underlying disease state. Nurse specialists in ophthalmology and genetics provide coordination of care, monitoring, and education to the patients and their families. This team can improve patient outcomes. [Level 5] 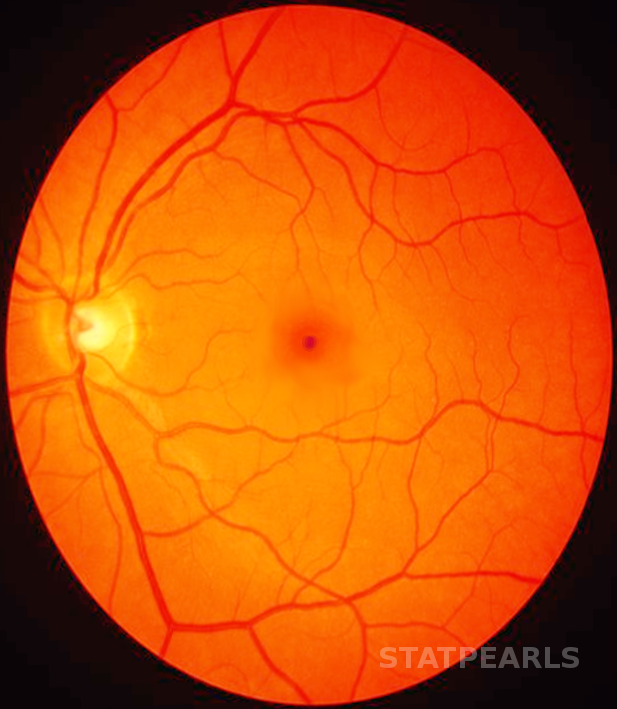