Cherry hemangiomas are the most common type of acquired vascular proliferation of the skin. They present as a dome-shaped, bright, ruby-colored papule with a pale halo. This activity describes the evaluation and management of cherry hemangiomas and highlights the role of the interprofessional team in the care of patients with this condition.

Cherry hemangiomas are common benign cutaneous vascular proliferations. They are also known as cherry angiomas, adult hemangiomas, or senile angiomas as their number tends to increase with age.[1] They were named Campbell De Morgan spots, after the name of a surgeon who worked at Middlesex hospital from 1842 to 1875.[2] According to the current classification by the International Society for Vascular Anomalies (ISSVA) for benign vascular tumors, cherry hemangiomas are not included although they have distinct clinical and histopathological features and are highly prevalent in adults.[1]

In the international literature, Campbell De Morgan spots have variously been known as senile angiomas, angioma eruption, angioma tuberosum, senile ectasia, angioma nodulare cutis, perles sanguines, ruby spots, and cancerodermes. Although De Morgan (1811 to 1876) associated these spots with the presence of cancer, this is not a common finding.

According to light and electron microscopic study of telangiectasia, cherry hemangiomas are a type of papular telangiectasia. These true capillary hemangiomas consist of newly formed capillaries that have narrow lumens and prominent endothelial cells that are arranged in a lobular pattern in the papillary dermis.[3] Cherry hemangiomas generally appear as multiple spots, 1 to 5 mm in size, bright red, and dome-shaped papules mostly on the trunk or upper limbs and rarely on hands, feet, and face.[3]

There is no well-known cause of cherry angiomas. Some of the associations and possible etiologies of these lesions are as follows.

Cherry hemangiomas are seen in about 7% of adolescents and 75% of adults over 75 years of age.[2] These lesions develop in adults in the third or fourth decade of life. About 5% to 41% of people begin to have cherry hemangiomas in their 20s. These lesions begin as small red macules or papules. They are initially 1mm in size and can reach up to 2.3 mm by the age of 50 but are usually less than 3.5 mm.[2]

Cherry hemangiomas are distributed equally in individuals of all races and ethnicities. They do not show any gender predisposition.

Cherry angiomas mostly appear with age. Although they are found to have an association with some malignancies, they are mostly developed in healthy individuals. These lesions begin as bright red, flat macules and grow to become 1 to 5 mm red papules. They are usually asymptomatic but can bleed with trauma.[3] They can appear on both sun-exposed and unexposed skin but usually spare mucous membranes. These lesions are present in the dermal papillae, and they consist of tortuous and spherical dilatations of capillary loops.[11]

It has been noted that the color of the cherry angiomas changes with hypoxia; they become blue rather than red. The small spots are noted to turn blue sooner than the larger ones. Once the patient is restored to cardiovascular stability, the lesions revert to their ruddy red color.[12]

Histologic examination of these lesions shows that they are located immediately under the epidermis in the papillary dermis and have a distinct structure from surrounding tissues.[13] These are true capillary hemangiomas that consist of newly formed capillaries that have narrow lumens and are lined by prominent endothelial cells that are arranged in a lobular pattern.[3] The capillaries forming cherry hemangioma show perivascular hyalinized sheaths. On immunohistochemical staining, perivascular hyalinized sheath and intercapillary connective tissue of the hemangiomas show marked staining for type VI collagen.[14]

Cherry hemangiomas are dome-shaped, bright, ruby-colored papules with a pale halo. They are small, well-demarcated, and often separated by septa. They are usually 1 to 5 millimeters in diameter. They occur most often as multiple lesions, usually found on the trunk or proximal extremities. They are rarely seen on the face, hands, and feet. When found in the form of multiple adjoining angiomas, they are said to form a polypoid angioma. These lesions most often blanch with applied pressure, but some are fibrotic and may not blanch completely.[15]

Cherry hemangiomas are diagnosed clinically by appearance. Optical coherence tomography, which is a low energy light-based imaging device, can be used to evaluate cherry hemangiomas before treating them with laser therapy. This imaging study determines the extent and depth of these lesions, which is useful in predicting the response of these lesions to laser therapy.[16] If there is a concern for malignancy, the lesion should be excised and sent for histopathologic examination.[4]

Although cherry hemangiomas are diagnosed clinically by appearance, their histopathologic findings are essentially the same as true capillary hemangiomas.[3] These histopathologic findings include a thinned epidermis and many newly developed, polypoid, neovascularized capillaries. These capillaries have thin narrow lumens along with prominent endothelial cells. The endothelial cells are most often arranged in a lobular fashion in the papillary dermis.[1] The newly formed capillaries are found early, while these capillaries dilate later. Therefore, late-stage tumors often tend to have increased dilated vessels.[3] The proliferative activation of endothelial cells may therefore be specific to the early stage and may disappear in the later stage.[1]

In addition to these findings, collagen fibers between blood vessels appear to be homogenous and show edematous changes. The epidermis may be atrophic, as characterized by loss of rete ridges. The epidermal collarette is similar in appearance to pyogenic granuloma. In addition, immunohistochemical staining demonstrates no abnormality in the expression or distribution of alpha-smooth-muscle actin and type IV collagen on the capillaries of cherry hemangiomas that have undergone proliferation. The dilated and congested vessels demonstrated through immunohistochemical staining may be responsible for the bright ruby-red appearance of cherry hemangiomas.[3] The atrophic epidermis and proximity to the epidermis also demonstrated through immunohistochemical staining, may be responsible for the ease of bleeding of these lesions secondary to trauma.

These lesions are most often asymptomatic but may bleed with trauma.[17] Patients may want to remove a cherry hemangioma, most often for either cosmetic reasons or for the prevention of bleeding following trauma.[18] Treatment for smaller lesions includes local anesthesia with 1% lidocaine, followed by electrocauterization. Larger lesions are often treated with shave excision, with electrocauterization of the base. In addition, cryotherapy may be employed. Superficial lesions may also be treated with CO2 laser therapy.[17]

Although traditionally cryosurgery, electrosurgery, or curettage have been employed in the treatment of cherry hemangioma, more recently, pulsed dye laser or intense pulsed light has been used with success. Krypton and 532 nm diode lasers work very well in eradicating these lesions.[19] Patients should be advised that the removal of these lesions may cause scarring.[18]

The prognosis for most patients is excellent. These lesions are most often asymptomatic.[17]

These lesions may bleed with trauma.[17] Patients may want to remove a cherry hemangioma most often for either cosmetic reasons or for the prevention of bleeding following trauma.[18] Patients should be advised that the removal of these lesions may cause scarring.[18]

Due to the association of cherry hemangioma with certain chemicals, patients should be advised to avoid topical nitrogen mustard therapy, bromides, or other chemicals.[20] These are noted to be increasingly used in tropical climates. In addition, these lesions are often found to be larger in patients with diabetes.[21] They are found with an increased expansion rate in tropical climates. Cherry hemangiomas are often associated with liver transplants, graft versus host disease, and patients who are immunocompromised secondary to cyclosporine treatment. They may also be seen in patients with cerebral cavernous malformations. In addition, there has been a reported case of familial nevus flammeus with early-onset cherry hemangiomas.[20]

Cherry hemangiomas have been found in increasing numbers in middle-aged to older adults. The numbers of these lesions tend to increase in number as a patient’s age increases. Most often, these lesions develop after the third decade of age. They are found in only 5% of adolescents, but 75% of adults over 75 years of age. In addition, multiple cherry hemangiomas have been reported in nursing home patients with a strong association with infections.[21]

Cherry hemangiomas are the most common type of acquired vascular proliferation of the skin and are diagnosed clinically by appearance.[4] The physical exam may demonstrate a well-demarcated, dome-shaped, bright, ruby-colored papule with a pale halo. If there is a concern for malignancy, the lesion must be excised and sent for histopathologic examination, involving coordination of care amongst providers. Once histopathologic findings return, demonstrating a thinned epidermis, newly developed, polypoid, neovascularized capillaries, coordination with further providers is warranted for excision.[1]

Although these lesions are most often asymptomatic, they may bleed with trauma, and patients may want to remove the lesion for either cosmetic reasons or for prevention of bleeding following trauma. The involvement of a provider capable of electrocauterization, shave excision, cryotherapy, CO2 laser therapy, curettage, pulsed dye laser, or intense pulsed light is warranted.[18] In order to optimize outcomes following the diagnosis of cherry hemangioma, prompt coordination of an interprofessional team is recommended. 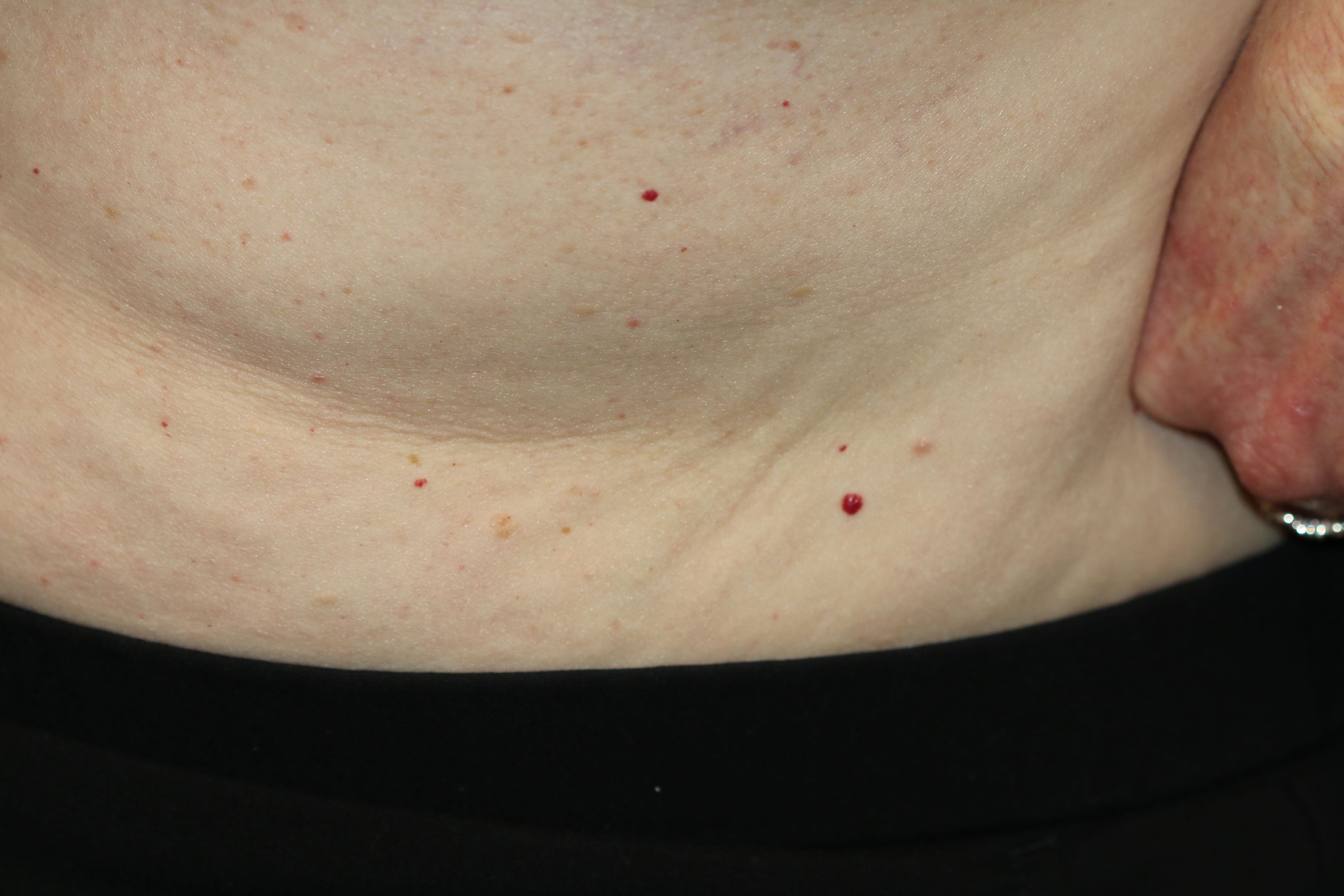 Patel BC, The krypton yellow-green laser for the treatment of facial vascular and pigmented lesions. Seminars in ophthalmology. 1998 Sep     [PubMed PMID: 9813106]