Ceruloplasmin is a serum ferroxidase that is responsible for 90% of copper transport. It is well known for its role in the pathogenesis of Wilson disease and iron metabolism.[1] Also, ceruloplasmin is a positive acute-phase reactant, meaning its levels will increase in inflammatory conditions or cell injury.[2]

Ceruloplasmin production occurs in the liver and is a ferroxidase enzyme that is encoded by the CP gene in humans.[3] Liver hepatocytes mostly synthesize ceruloplasmin. In the liver, P-type ATPase (ATPase 7B) enzymes are necessary to incorporate copper into apo-ceruloplasmin.[4] Ceruloplasmin is then released into the bloodstream to transport proper to distal sites and to complete its functions in other metabolic processes, namely iron metabolism. A solution of ceruloplasmin is blue, and excess in serum may give the serum a greenish hue. Each ceruloplasmin molecule can contain 6 to 8 copper atoms.[5]

It is synthesized primarily in the liver parenchymal cells, with small amounts coming from macrophages and lymphocytes.[7] The peptide chain is synthesized then copper is added from an intracellular ATPase.[8] Copper is essential for the normal folding of ceruloplasmin as well as for the normal oligosaccharide attachment. Much of the apo-ceruloplasmin, which does not contain copper or the ATPase, undergoes intracellular degradation, although a small portion will reach circulation but has a short half-life of 4 to 5 days.

Ceruloplasmin has a molecular weight of 132kDa, and has a polypeptide chain of 1046 amino acids and three asparagine-linked oligosaccharides, with a total carbohydrate content of 10%. Size and charge of the molecule depend on glycosylation of the molecule, the number of copper atoms, peptide chain variations, and polymerization. Ceruloplasmin is highly prone to proteolysis. The structure of ceruloplasmin can be studied by electron paramagnetic resonance spectroscopy.

The molecule is a catalyst for redox reactions in plasma. It can oxidize iron from ferrous (2+) to ferric iron (3+), and this assists in the binding of iron to transferrin. It is also thought to be involved in controlling membrane lipid oxidation. In the presence of superoxide, ceruloplasmin promotes LDL oxidation and may contribute to atherosclerosis.

Ceruloplasmin has a limited role in copper transport to the tissues. Absorbed copper is transported to the liver bound to albumin via the portal system. The liver is the key organ in copper homeostasis, and more than 90% of the copper exported from the liver is in the form of ceruloplasmin.

Neurological disorders in hereditary ceruloplasmin deficiency may be caused by disordered iron transport in the brain. Ceruloplasmin has a limited role in plasma copper transport to tissues. Albumin and transcuprein appear to be the other major copper transport proteins, especially immediately post gastrointestinal absorption.

Ceruloplasmin measurement is via a blood test, which often occurs by analyzing a serum sample with immunoassays, immunoturbidimetry, or immunonephelometry. The sample needs to be spun and separated as soon as the laboratory receives it and assayed promptly. The samples may be stored at 4 degrees Celius for up to three days or longer at -70 degrees Celsius. The serum test is often part of the workup when there is suspicion of Wilson disease and is commonly ordered along with urine copper levels. Several factors, including diet, hormone levels, and other genetic disorders, may influence the resulting levels of ceruloplasmin in the urine and serum.

Treatment for Aceruloplasmin and Wilson Disease

Treatment options for Wilson disease include chelation therapy (D-penicillamine, trientine, and tetrathiomolybdate) and/or zinc salts. Medical therapy is continued lifelong as copper accumulation is not manageable with dietary restriction alone. It is important to note that there may be an associated paradoxical worsening of neurological status after initiation of chelation therapy. While this is not fully understood, studies suggest that increased mobilization of free copper by chelator therapy may lead to acute worsening upon initiation of treatment.[14]

Diabetes mellitus, ataxia, dystonia, Parkinsonism, psychiatric problems (mostly mood disorders), cardiac disease, thyroid dyscrasia, anemia, and liver damage are common complications shared by both Wilson disease and aceruloplasminemia. Amenorrhea and frequent abortions may be complications of copper toxicity that may affect fertility. Antipsychotic drugs are applied in severe mania and for the treatment of psychotic symptoms. In Wilson's disease, antipsychotics pose an increased risk of neurological deterioration and hepatic injury. As such, antipsychotics with low EPS risk, such as clozapine or quetiapine, should be used.[16]

Surveillance should include yearly glucose tolerance tests starting at age 15 or age of diagnosis if, after 15 years old, to monitor for the inception of diabetes mellitus. Regular eye exams should also be a consideration as retinopathy is a prominent feature in aceruloplasminemia and Wilson disease. Yearly EKG, evaluation of thyroid and liver function in addition to CBC starting at the time of diagnosis, should be performed to monitor for other potential complications. Blood transfusions should be approached cautiously as the increased iron load may be difficult for patients with these disorders.

While most patients with Wilson disease who become pregnant have successful pregnancies, a discussion is necessary about potential side effects of anti-copper therapy as all available anti-copper drugs can pass into the breast.

Wilson disease presents between ages 5 to 35.

The clinical presentation may include: 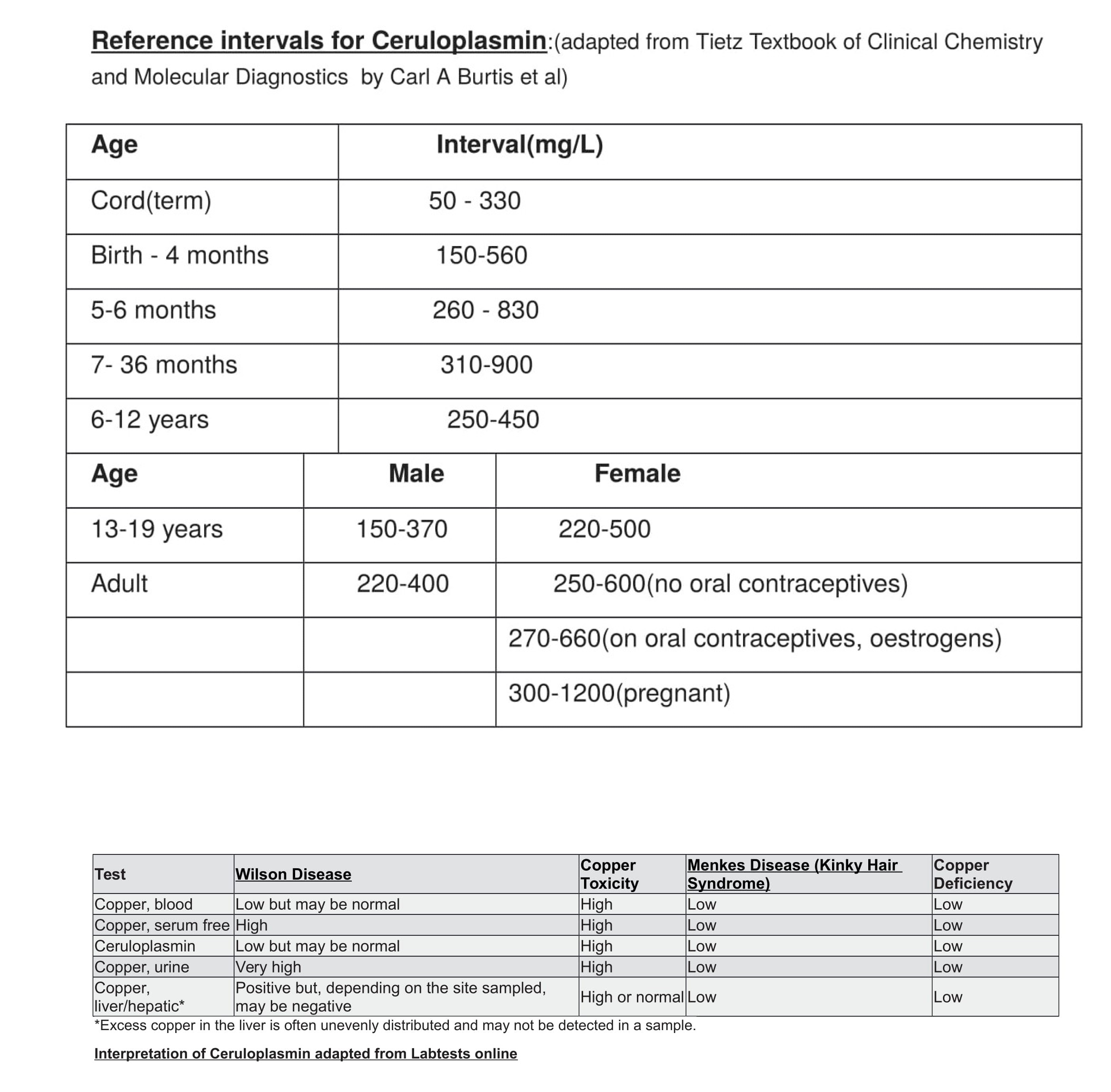 intervals for ceruloplasmin and interpretation of the test
Contributed by Dr. Ravindra Sirkar