Central pontine myelinolysis (CPM) is a component of osmotic demyelination syndrome (ODS). It is characterized by damage to regions of the brain, most commonly pontine white matter tracts, after rapid correction of metabolic disturbances such as hyponatremia. Central pontine myelinolysis (CPM) was first described in 1959 by Adams and his colleagues in a report of four patients with pseudobulbar palsy and quadriplegia. The initial cases were seen in patients with alcohol use disorder and malnutrition; however, by the 1970s,  subsequent cases showed a link with rapid sodium correction. [1] CPM has since been reported in cases of severe burns, liver transplantation, anorexia nervosa and hyperemesis gravidarum, and hyperglycemic states. Clinical features of CPM typically begin to appear within several days after rapid correction of hyponatremia. Clinical manifestations vary and can range from encephalopathy to coma and death.

Initial autopsies by Adams and colleagues first described the lesions of CPM as symmetrical and constant in location, which was suggestive of a toxic or metabolic disease. [1] In 1976, Tomlinson described two cases of middle-aged women with no history of alcohol use disorder or malnutrition who presented with hyponatremia and were treated with rapid correction of sodium. The rapid correction of sodium was followed by rapid alteration in consciousness and the development of quadriparesis and dysphagia. [2]  Thereafter, Laureno and Kleinschmidt-DeMasters used animal models to show that the rate of sodium correction was, in fact, the causative factor. [3]

The incidence of CPM is not well-known due to under-diagnosis. A retrospective study from 2015 shows the incidence of osmotic demyelination syndrome is 2.5% among intensive care unit (ICU) admissions.[4] Studies have reported neurologic complications in 25% of severely hyponatremic patients after rapid sodium correction. Patients with increased chronicity of hyponatremia and rapid rates of correction in the first 48 hours were found to have higher rates of associated neurologic complications. The incidence of CPM was also analyzed in patients based on age, sex, alcohol use disorder, and presenting symptoms, all of which did not show a statistically significant disposition toward neurologic sequelae.[5] However, CPM has been shown to have an increased incidence in patients after orthotopic liver transplantation, with most cases seen within ten days of transplantation. [6][7]

Hyponatremia is defined as serum sodium below 136 mEq/L. In response to decreased serum tonicity, extracellular water will shift into cells where there is higher tonicity via the process of osmosis, in an attempt to normalize the gradient, thereby causing cerebral edema.

The brain is able to adapt to a decrease in serum tonicity by several proposed mechanisms. One protective mechanism is through the displacement of water from the cells into the cerebrospinal fluid. Another mechanism called volume regulatory decrease includes the removal of intracellular solutes and water via ion channels to reduce brain swelling and normalize brain volume. With chronic hyponatremia (greater than 48 hours in duration), other adaptive mechanisms include the efflux of organic osmolytes (glutamate, taurine, and glycine) with water, which also reduces cellular swelling. [8] Therefore, patients with chronic hyponatremia have already developed compensatory mechanisms involving solute losses, which puts them at higher risk for the development of CPM.

With the rapid correction of hyponatremia, the brain is unable to recapture lost osmolytes, leading to dehydration of brain tissue and demyelination of white matter. The main cells affected in the brain are the astrocytes. Recent studies in rat models that show that astrocyte apoptosis is preceded by myelin loss and was observed within 48-72 hours after the correction of hyponatremia. [9] The main consequence of this is termed osmotic demyelination syndrome. The pons of the brain is the most susceptible region of the brain hence termed central pontine myelinolysis CPM. Current recommendations are that the rate of sodium correction should not exceed 8-12 mEq/L/day to avoid these complications.

CPM is a concentrated, often symmetric, noninflammatory demyelination within the central basis pontis. Demyelination also occurs in extrapontine regions in at least 10% of patients, including the midbrain, thalamus, basal nuclei, and cerebellum. Histology showed demyelination with astrocytosis and infiltration by lymphocytes and macrophages.[10]

The onset of symptoms is usually seen 1 to 14 days after electrolyte correction. Clinical features of central pontine myelinolysis reflect damage to upper motor neurons and generally present in a biphasic course. Initially, patients present with acute encephalopathy and seizures that typically resolve as normal sodium levels are restored. This is later followed by clinical deterioration 3-5 days later. Signs and symptoms include dysphagia, dysarthria, spastic quadriparesis, pseudobulbar paralysis, ataxia, lethargy, tremors, dizziness, catatonia, and in the most severe cases, locked-in-syndrome and coma. [11][12]

Clinical assessment, review of labs with particular attention to the rate of sodium correction is essential in the evaluation and diagnosis of CPM. Imaging is not required but can be used to confirm the diagnosis, especially if the diagnosis is uncertain. Characteristic findings on magnetic resonance imaging are seen on diffusion-weighted imaging (DWI), showing diffusion restriction of the central pons with sparing of the periphery. These findings are usually seen within 24 hours of the onset of signs or symptoms. T2 and T2-flair images signal in a “bat-wing” shaped central pontine distribution and are generally seen later in presentation [13] Imaging findings can be delayed for up to 2 weeks, thus if imaging is negative, the diagnosis of CPM is not excluded. If clinical suspicion for CPM remains high, MRI should be repeated within two weeks. [14]

The treatment of central pontine myelinolysis is primarily aimed at prevention. Various studies have been conducted to determine the rate at which sodium should be corrected. The current recommendations are to correct the sodium not more than 8-12 mEq/L per 24 hours. However, in patients with hyponatremia lasting 48 hours or of unknown duration, the rate of serum sodium correction should not exceed 6-8 mEq/L per 24 hours.

In cases of severe hyponatremia (sodium <120 mEq/L) with neurologic symptoms, a hypertonic solution of 3% saline should be administered. If neurologic symptoms are not present, the primary focus should be on a slow rate of sodium correction with intravenous fluids to achieve a rate that does not exceed 8-12 mEq/L per 24 hours. During the infusion of fluids, it is essential to monitor serum sodium levels every 4-6 hours. If there are severe derangements in sodium, sodium levels can be monitored hourly.

Retrospective studies have shown that desmopressin has been safe and effective in preventing and reversing the overcorrection of hyponatremia. These studies also assessed the introduction of desmopressin as either proactive therapy, reactive therapy, or rescue therapy. They concluded that a proactive strategy of desmopressin administration with hypertonic saline was associated with a lower incidence of sodium overcorrection. Typically, desmopressin 1 to 2 mcg is administered intravenously or subcutaneously, every 6-8 hours for 24 hours. Patients are simultaneously given intravenous hypertonic saline at 15 to 30 ml/hr. [15][16]

5% dextrose in water (D5W) and desmopressin can be utilized with the goal of reintroducing hyponatremia to ensure that the rate of correction will be 8-12 mEq/L when the rate of sodium correction has been too rapidly corrected. Desmopressin binds to V2 receptors of the renal collecting duct, which translocates aquaporin channels to the apical lumen of the collecting duct and increases water reabsorption. It can be given at a dose of 2 to 4 mcg intravenously or subcutaneously. D5W at 6 mL/kg of lean body weight can be infused over 1 to 2 hours and should decrease serum sodium by 2 mEq/L. Infusion of D5W is continued until goal serum sodium is reached. [17]

There have been no randomized control studies conducted to confirm the efficacy of these treatment modalities. However, they have been used in a small number of cases and have been shown to have positive outcomes.

The use of glucocorticoids, such as dexamethasone, has also been studied as glucocorticoids are known to impact the permeability of the blood-brain barrier. Studies done in rat models showed minimal neurologic impairment in rats that were treated with dexamethasone 2mg/kg at 0 and 6 hours after hypertonic 3% saline was administered. The rats that were treated with dexamethasone also exhibited rare lesions on brain imaging in comparison to the untreated group, which exhibited numerous brain lesions. There have been few cases where dexamethasone was used in humans. However, this is not well studied, and further investigation is warranted. [20]

Central pontine myelinolysis was once thought to be fatal, with a mortality of 90% to 100%. This is likely because it was initially diagnosed at autopsy. The mortality rate has significantly decreased, with recent retrospective studies showing 94% survival. These studies cite that about 25%-40% make a complete recovery without deficits, and 25%-30% remain incapacitated. [21][22][23]

Patients with risk factors for poor prognostic outcomes are those with serum sodium of <120 mEq/L, hypokalemia, and low Glasgow coma scale (GCS) during hospitalization. Autologous liver transplant patients who develop central pontine myelinolysis or osmotic demyelination syndrome were also reported to have worse outcomes, with a mortality of 63% at one year. [24] [23]

Clinical and radiological features were not found to be of prognostic significance. Improving prognostic outcomes focuses on early recognition of those patients that are at higher risk of developing CPM, avoiding rapid overcorrection of sodium, and making a prompt diagnosis of the condition. Favorable prognostic outcomes also include the avoidance of secondary complications of the condition such as aspiration pneumonia, urinary tract infection, or deep venous thrombosis. [21]

Complications of CPM can vary on a case by case basis. Central pontine myelinolysis can have neurologic manifestations such as locked-in syndrome, coma, and death.

Given the possible deleterious complications of CPM, patients should be educated on the disease process, treatment options, and prognosis. Patients should also be involved in regular interval follow-up once they are discharged from the hospital in order to better evaluate their clinical improvement.

The management of central pontine myelinolysis is challenging and requires the coordination of physicians and ancillary staff to have positive outcomes. The critical component is the prevention of the condition, which is structured around close monitoring of serum sodium levels. Patients being monitored should be under close surveillance in the appropriate setting, such as the intensive care unit. Serum sodium levels should be monitored every 4-6 hours, or hourly if there are severe derangements. Current recommendations for the rate of sodium correction are 8 to 12 mEq/L per 24 hours. However, in patients with hyponatremia lasting 48 hours or of unknown duration, the rate of serum sodium correction should not exceed 6 to 8 mEq/L per 24 hours. [Level 1]

The interprofessional team may include intensivists, neurologists, nurse practitioners, critical care nurses, and pharmacists. Providers should be aware of this devastating complication. Nurses must monitor sodium levels and patient condition, reporting back to managing providers. Pharmacists review orders for intravenous fluids and should communicate with ordering clinicians if there is a concern. [Level 5] 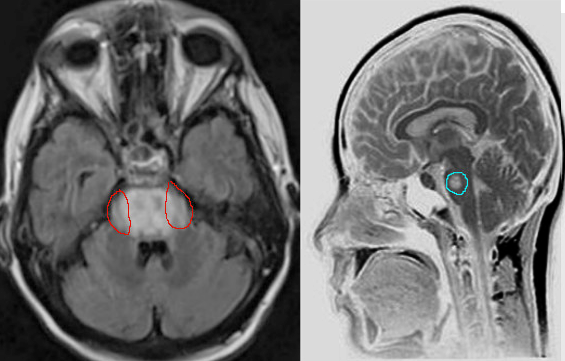