Volvulus occurs when portions of the bowel get entangled upon a mesenteric axis, which can cause impairment of the blood supply or can result in complete or partial obstruction of the bowel lumen. This condition usually affects the colon. Colonic volvulus is rare in the United States, and factors into about 4 percent of causes of large bowel obstruction, followed by cancer and diverticulitis. Of note, there are certain regions of the world where colonic volvulus happens more frequently. In areas of the Middle East, India, South America, Africa, and Russia, colonic volvulus attributes for approximately 50 percent of all accounts of colonic obstruction. The regional areas listed above have been coined the "volvulus belt." Sigmoid volvulus occurs more frequently compared to cecal volvulus. This activity describes the evaluation and management of cecal volvulus and highlights the role of the interprofessional team in improving care for affected patients.

Volvulus occurs when portions of the bowel get entangled upon a mesenteric axis, which can cause impairment of the blood supply or can result in complete or partial obstruction of the bowel lumen. This condition usually affects the colon. Colonic volvulus is a rare occurrence in the United States, attributing to approximately 4% of causes of large bowel obstruction, followed by cancer and diverticulitis. Of note, there are certain regions of the world where colonic volvulus happens more frequently. In areas of the Middle East, India, South America, Africa, and Russia, colonic volvulus attributes for approximately 50% of all accounts of colonic obstruction. The regional areas listed above have been coined the "volvulus belt." Sigmoid volvulus occurs more frequently compared to cecal volvulus.[1][2][3]

This condition occurs when redundant and loose mesentery twist around an axis. In terms of a cecal volvulus, the terminal ileum and right colon are involved. When a volvulus involves the cecum alone, it is also called a cecal bascule. This occurs when a highly mobile cecum traverses from a caudad to cephalad direction.[4]

Colonic volvulus ranks below cancer and diverticulitis as a cause of large-bowel obstruction.

In Africa and the Middle East, nearly 50% of large-bowel obstructions are caused by volvulus, usually of the sigmoid colon. Cecal volvulus is less common than sigmoid volvulus, accounting for 10% to 15% of all cases of volvulus, and it tends to affect women in the sixth decade of life.

Associated risk factors for colonic volvulus are advanced age, chronic constipation, and diets rich in high fiber. Cecal volvulus most commonly occurs in the second and third decade of life, compared to sigmoid volvulus that occurs in the seventh and eighth decade of life. Patients that have psychiatric conditions or are institutionalized and taking psychotropic drugs have a higher incidence of colonic volvulus. The use of psychotropic drugs can cause hindered intestinal mobility and predispose patients to volvuluses.[5][6]

In general, there are three different types of cecal volvulus:

Patients with colonic volvulus may present with an intestinal obstruction. Often, the symptoms are hard to differentiate from blockages caused by colon cancers. Common symptoms are acute onset of severe abdominal pain, constipation, obstipation, nausea, and vomiting. Often, a tympanitic and markedly distended abdomen are seen, and often, the distention is more impressive than other causes of bowel obstruction. When the wall of the distended bowel is placed under increased tension, the cecal volvulus may be associated with ischemia. Another cause of ischemia may be occlusion of the arterial blood supply to the mesentery cause by torsion. Ominous signs include tachycardia, rebound tenderness, and severe abdominal pain not improved with medical management.

Work up for a colonic volvulus includes a complete blood count (CBC) with differential, a comprehensive metabolic panel, and a lactic acid. Laboratory findings may be useful; however, they are not diagnostic. A leukocytosis level, a left shift (pandemic), or a metabolic acidosis may indicate systemic sepsis, bowel ischemia, or peritoneal infection. Electrolyte abnormalities may develop in the setting of a bowel obstruction and vomiting.

Radiographic imaging can help differentiate between a sigmoid and cecal volvulus from other abdominal pathologies. For a cecal volvulus, an abdominal x-ray will reveal a dramatic dilation of bowel extending from the right lower quadrant moving upwards to the left upper quadrant of the abdomen (Figure 1). Usually, a patient with a cecal volvulus will present with small and large bowel obstructions, with the collapse of the distal large bowel, and with extensive dilation of the proximal small bowel. A definitive sign of a cecal volvulus is the upward displacement of the appendix with obstruction of the large bowel. Comparatively, a sigmoid volvulus will show findings of a bent inner tube sign with the apex of the volvulus located in the left upper quadrant.

A mesentery torsion around the ileocolic vessels as seen on a CT scan is described as a "whirl sign" and is considered pathognomonic for diagnosis of a cecal volvulus.

Treatment for cecal volvuli usually entails a surgical intervention. Other inventions such as a barium enema or a colonoscopy, can offer a non-operative reduction of a cecal volvulus. However, these modalities are rarely successful. For these non-operative treatments, there is a high risk of perforations and should not be attempted. Colonic necrosis can be miss up to approximately 20% to 25% of the time when non-operative modalities are used.  Surgical treatment and will vary based on patient stability and findings seen intraoperatively.  Intraoperatively, the surgeon will ascertain if there is bowel compromise or if the bowel is viable. These findings will help dictate appropriate surgical intervention.[2][8][3]

For patients who are hemodynamically unstable without bowel compromise, a cecopexy should be performed in conjunction with a cecostomy tube placement or cecopexy can be done alone.

For patients who are stable with bowel, the surgeon should proceed with a right hemicolectomy or ileocolic resection followed by an ileocolic anastomosis.

For patients who are unstable with bowel, the surgeon should proceed with a right hemicolectomy or ileocolic resection with an ileostomy creation. Later, once the patient is stabilized, the ileostomy may be reversed.

Cecal volvulus is not a benign disorder. If the treatment is delayed, it carries a mortality in excess of 30%. Most studies indicate that the time to treat should be within 24-72 hours after diagnosis. This much time is required for hydration and any investigations. Even after cecal volvulus is treated, patients have high morbidity due to a prolonged ileus, wound infection, respiratory failure, and bowel obstruction. [9]

Patients often require a prolonged stay in the hospital. Most patients are elderly and frail. If the ileus is prolonged, they often require IV fluids for a few days. DVT prophylaxis and physical therapy are recommended.

There are no evidence-based studies on the diagnosis or treatment of cecal volvulus. The condition is not so common in North America but since it carries a very high mortality, it is important that healthcare workers be aware of the disorder. An interprofessional team approach is recommended to ensure prompt diagnosis and treatment. Since most patients present to the emergency room, both the triage nurse and the emergency physician must know the importance of timely admission and referral to a general surgeon. Because most patients have numerous comorbidities, the initial management is best done in a critical care unit. The patient must be hydrated and cleared for surgery by the internist. Depending on patient age and comorbidity, the type of procedure will vary. Hence a gastroenterologist and a general surgeon must be in communication to offer the patient the best treatment available. Nurses in the ICU need to monitor the vitals, abdominal girth, and urine output prior to surgery. A colostomy nurse should see the patient in case the patient ends up having an ileostomy or a colostomy.[3][10][11]

There are only small case series and isolated reports on outcomes of patients managed with cecal volvulus. For those who have delayed diagnosis, the outcomes are poor. Even those who undergo timely surgery have high morbidity as a consequence of their age. Laparoscopic surgery is preferred to open surgery but sometimes the urgency of the situation may not allow it. No matter how one approaches the patient, the family must be fully informed of the potential complications, including recurrence and a stoma.[12] (Level 111) 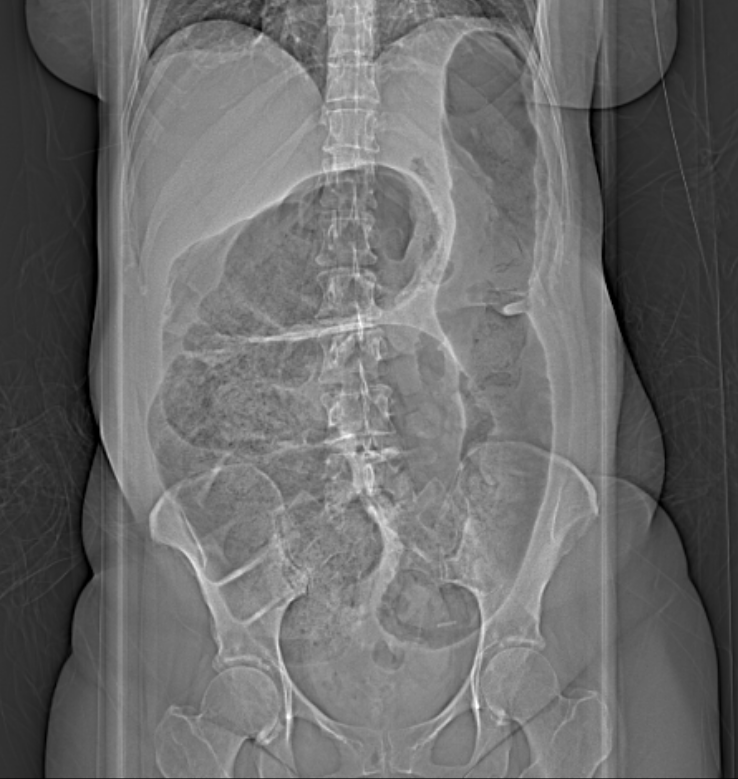 Figure 1: Abdominal xray of a cecal volvulus revealing a dramatic dilation of bowel extending from the right lower quadrant moving upwards to the left upper quadrant of the abdomen.
Contributed by Wyckoff Heights Medical Center 2017