The velum interpositum (VI) is a membrane resulting from the superposition of two layers of the tela choroidea of the third ventricle demarcating a potential space containing cerebrospinal fluid (CSF) located in the region between the internal cerebral veins (ICV) and the posterior medial choroidal artery. The dilatation of this space is “cavum veli interpositi” (CVI). This activity describes the anatomical characteristics of the cavum veli interpositi and highlights its role in human pathology. The part the interprofessional team plays in the care of these patients will be reviewed.

The velum interpositum (VI) is a membrane resulting from the superposition of two layers of the tela choroidea of the third ventricle demarcating a potential space containing cerebrospinal fluid (CSF) located in the region between the internal cerebral veins (ICV) and the posterior medial choroidal artery.

Kruse, in 1930 defined the dilatation of this space as “cavum veli interpositi” (CVI). Other names frequently used to describe this structure are “ventriculi tertii, “cisterna interventricularis,” “transverse fissure,” and “sub-trigonal fissure.”

CVI has a triangular shape with the wide base dorsally and the apex pointing anteriorly, reaching as far forward as the foramen of Monroe.

CVI is part of the group of "cystic persistent primitive structures" of brain midline as the absence of septum pellucidum(ASP), the cavum septi pellucidi (CSP), and the cavum vergae (CV).

These cystic structures are present during the brain's developmental process in the embryonic period, and they regress between the seventh month of intrauterine life and the second year of postnatal life. They are normal findings during fetal life, but they persist in a certain proportion of the adult population.[1]

CVI is an anatomic variation originating from a protrusion of the pia mater into the primitive neural tube during the third fetal month.[3]

CVI is considered a structure normally present in the fetal brain, which decreases in size after full-term birth and an uncommon variant in the adult.

The persistence in children between the ages of 1 and 10 is around 30%. Cheng found an incidence of CVI about 21% at the ultrasonography of children born preterm, while a CT study based on the analysis of 442 adults showed an incidence of 7.24% for the CVI.[2][4]

CVI was present in 5.54% of a population of 505 neurosurgical patients between 2 months and 79 years old. No statistically significant difference existed in the frequency of CVI between the genders and age groups. CVI is considered to be twice as frequent as the cavum vergae.[5]

Cavum veli interpositi will not usually cause symptoms, and it is a common incidental finding at brain MRI. Symptoms occur rarely, and they primarily relate to the ball-valve mechanism between the cisterna CVI and the cisterna venae magnae Galeni with transient increased intracranial pressure.

CVI is a potential space containing cerebrospinal fluid formed between the two layers of the tela choroidea of the third ventricle. The tela choroidea is composed of a dual-layer loose connective tissue of pia mater surmounted by the ependyma. A very rich arterial and venous vascularization characterizes the tela choroidea.

The role of cavum veli interpositi in brain pathology is still uncertain, although several pieces of evidence have accumulated.

The existence of a syndrome characterized by moderate ventricular dilation without intracranial hypertension, progressive increase in head size has been hypothesized in association with the presence and CVI.[6] Some studies supposed a relationship between the presence of dilated CVIin children and the presence of hydrocephalus, seizures, and mental retardation.[6][7]

Tubbs and coll. (J Pediatr Neurol. 2004; 2: 107-110) studied a couple of identical twins with midline cerebral cysts, increased head size, and mild ventricular enlargement. They suggested that the midline cysts can lead to microcephaly and mild ventricular enlargement through recurrent episodes of raised intracranial pressure. The intermittency of symptoms was explained by a ball-valve mechanism between the cisterna CVI and the cisterna venae magnae Galeni.

The CVI is generally an occasional common finding during routine MRI or CT scans performed for other conditions.CVI is also usually visible at the transcranial ultrasound of newborns.

The treatment of the small cysts of cavum veli interpositi is mainly based on their collapse. Shunting or endoscopic ventricular fenestration are valid alternatives for the treatment for the large cysts of CVI when they become symptomatic because it creates a communication between the cavity of the midline filled with CSF and the νentricular system. The ventriculoperitoneal shunting works to create communication between the cystic cavity and the ventricular system.[8]

The cyst of cavum veli interpositi must be distinguished mainly from other midline intracranial cysts.

The key to the differential diagnosis is an accurate anatomical evaluation of these structures:

Cavum septi pellucidi (CSP): cavum with the same triangular shape but with the apex pointing posteriorly. CSP is anterior to the foramen of Monro, between the frontal horns of the lateral ventricles.

Cavum vergae: cavum with a rectangular shape in cross-section. It is superior to the columns of the fornices, which are displaced inferiorly.

Pineal cyst: This is common, usually asymptomatic, and incidental finding as for CVI. The pineal cyst is located below the internal cerebral veins abutting the colliculi.

Arachnoid cyst: an arachnoid cyst of the region of the quadrigeminal cistern can mimicking a CVI. It is usually eccentric, located below the cerebral veins, and not triangular in cross-section.

Cavum veli interpositi is usually an incidental finding at an MRI or CT scan and is mostly asymptomatic.

The rare symptomatic cases treated with the collapse of the cavity, the shunting, or the endoscopic ventricular fenestration have always shown a good prognosis.[9][10]

The presence of the cavum veli interpositi in children has correlations with the development of psychosis spectrum disorders.

Other studies supposed a relationship between CVI and the development of hydrocephalus, mental retardation, and seizures in children.[6][7]

However, all studies about this matter concluded that further evaluation is needed to find whether there is any clinical complication related to the presence of CVI.

Patients need reassurance that the cavum veli interpositi is a normal anatomical variation, and it does not require surgical intervention except in very rare cases.

The cavum veli interpositi is generally an occasional common finding during routine MRI or CT scans performed for other conditions.

The role of CVI in human pathology is still uncertain, and further studies are needed.

The role of CVI in human pathology is still uncertain. For this reason, the evaluation of the rare symptomatic cases that require surgical treatment must receive an accurate interprofessional analysis. A rigorous clinical assessment and radiological examinations are necessary before any treatment. The interprofessional collaboration between neuroradiologists, neurologists, neuropsychiatrists is essential. 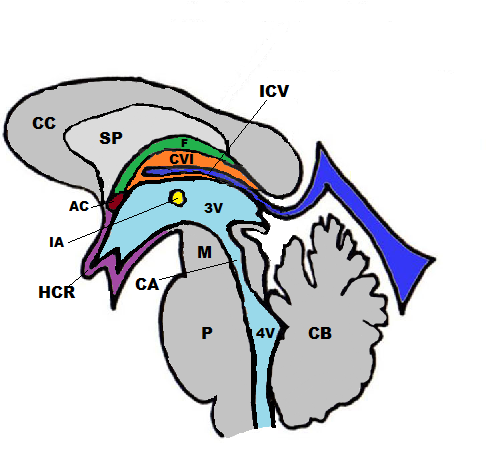 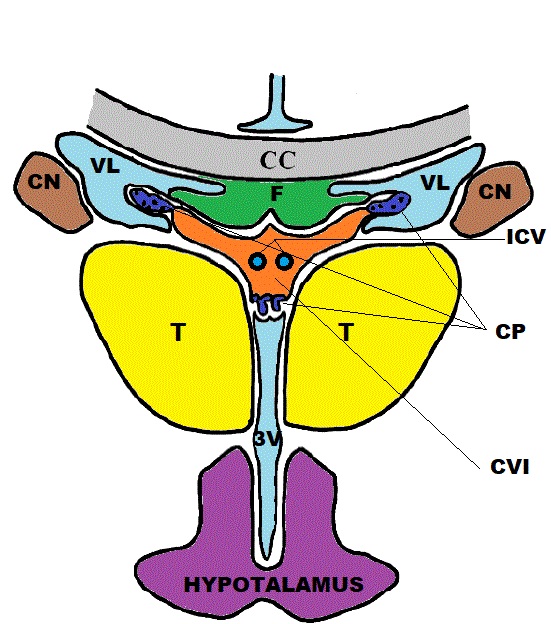 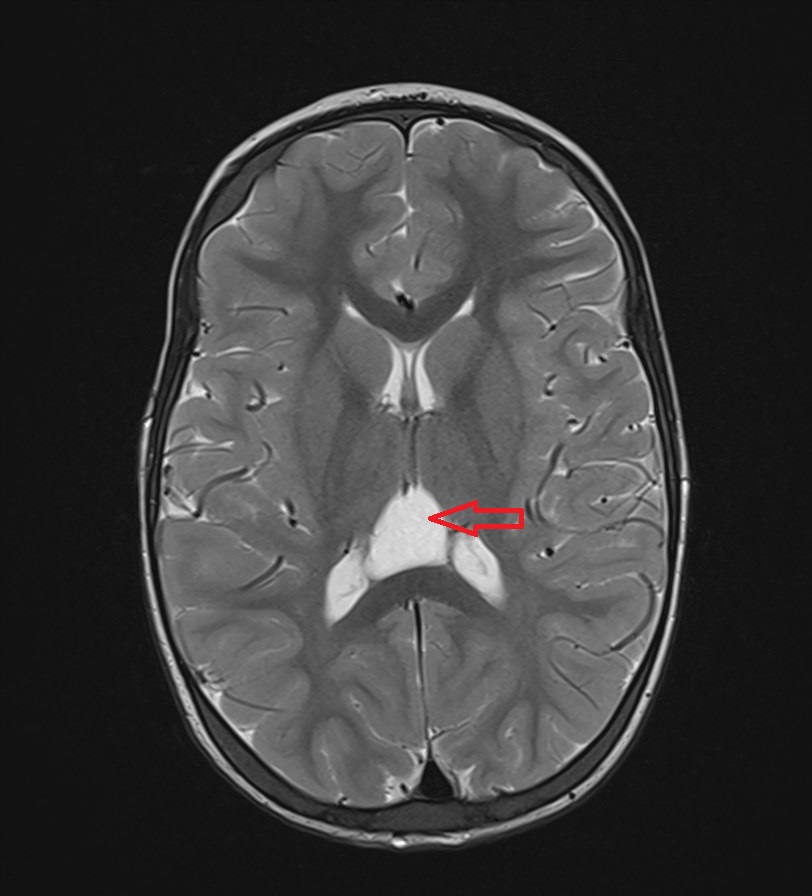 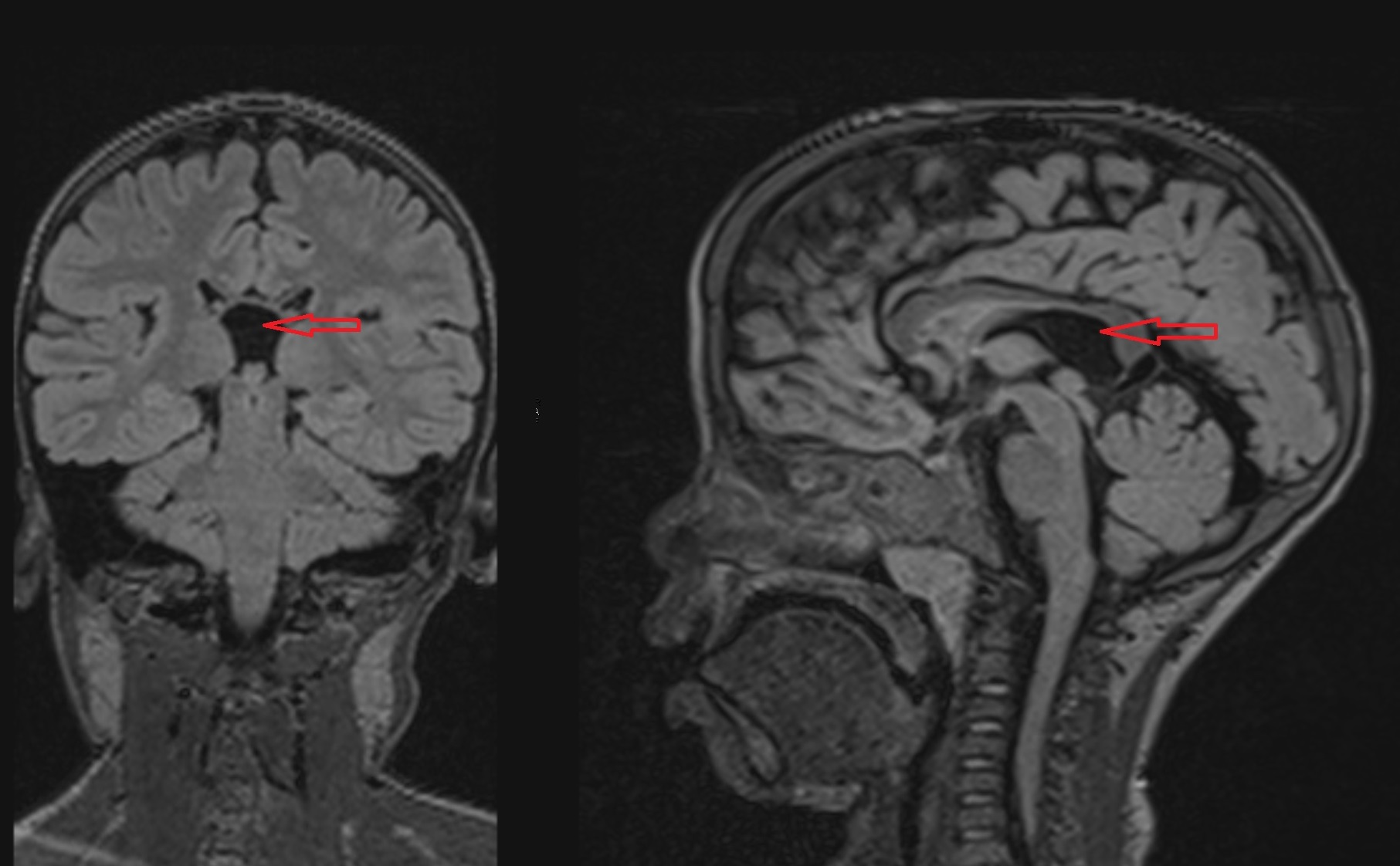 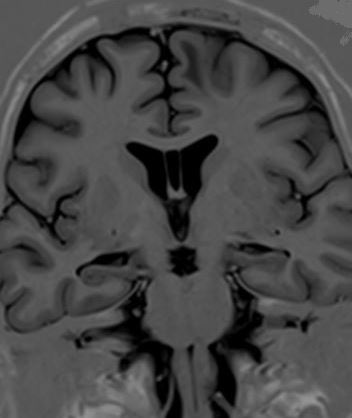 Kier LE, The evolutionary and embryologic basis for the development and anatomy of the cavum veli interpositi. AJNR. American journal of neuroradiology. 2000 Mar;     [PubMed PMID: 10730668]