The endless types of pulmonary pathologies that exist present in a variety of different ways. With proper suspicion and medical knowledge, the correct diagnosis can be achieved. This activity highlights the role of an interprofessional team in the diagnosis and treatment of bronchial carcinoid tumors and their application to everyday practice.

Bronchial carcinoid tumors (BCTs) are rare neuroendocrine tumors, potentially secreting biologically active chemical substances. They account for 1% to 2% of all lung tumors. BCTs were formerly known as bronchial adenomas, however, this terminology is no longer used as they are not glandular nor are they consistently benign. They are typically a slow-growing neoplasm with varying behavior, however, they can grow rapidly and overall be much more aggressive.[1]

BCTs are most commonly endobronchial lesions however, up to 20% can be present as peripheral pulmonary nodules.  They constitute between 1% and 5% of all lung cancers and are usually sporadically occurring malignancies.

The mean patient age at diagnosis of bronchial carcinoid tumors is 45 years. It affects both males and females equally. Patients who are diagnosed with typical carcinoids are approximately one decade younger than those diagnosed with atypical carcinoids. 15% of cases metastasize, usually to the liver, bone adrenal glands, or brain. There is evidence that the prevalence is gradually increasing, which may be at least in part due to advanced diagnostic techniques.

BCTs are known to be sporadically occurring, although there are instances associated with multiple endocrine neoplasia type 1 (MEN-1) syndrome. There are no environmental factors, such as smoking or inhaling carcinogens, that increase the risk of developing BCTs.[2]

BCTs develop from Kulchitsky cells found within the bronchial mucosa.  They also develop from tracheobronchial tree cartilage, more specifically, the epithelium of this cartilage. The difference between carcinoid tumors and tumorlets is that BCTs exhibit neuroendocrine function. They secrete substances, which are typically peptide hormones and neuroamines, which secrete serotonin, ACTH, somatostatin, and bradykinin.

The majority of BCTs arise from the hilum or perihilar region of the lung, 75% of which arise in the lobar bronchi. In comparison, 10% and 15% arise from the mainstem bronchi and periphery, respectively.  These tumors are highly vascularized and polypoid masses, which are less than 3 to 4 cm in size.[3]

Histologically carcinoid tumors of the lung are similar to those found in the intestine. They appear as nests and cords of small, round, uniform cells. Atypical carcinoids differ in that they tend to be more aggressive, as evidence by an increased number of mitoses and more pleomorphism.  Atypical BCTs have a greater tendency to invade nearby lymphatics. Statistics show that 90% of BCTs are well-differentiated compared to 10% of atypical cases, which have more pleomorphism.[4]

High suspicion of diagnosis is needed to identify bronchial carcinoid tumors, which often leads to delayed diagnosis.  35% of patients will present with either productive or nonproductive cough. Others may present with wheezing, which is often misdiagnosed as asthma and has a prolonged treatment course without improvement.  Approximately 25 to 50% of patients will report hemoptysis, while 40% will report a history of chest pain or evidence of bronchial obstruction.

Other presentations could be consistent with recurring pneumonia distal to the obstruction caused by the tumor. Rarely will patients experience carcinoid syndrome while the tumor is located in the tracheobronchial tree.  If a patient has neuroendocrine production of ACTH due to the carcinoid tumor, they may present with Cushing's syndrome.  A large portion of bronchial carcinoids, up to 25%, are asymptomatic cases.

75% of cases are detected on a chest X-ray.  Often incidental findings of pulmonary nodules were found on x-ray.  As BCTs are commonly central lesions of the tracheobronchial tree, findings related to bronchial obstruction are commonly found. Overinflation of the lung as a result of air trapping due to the lesion can be seen as well as peripheral atelectasis distal to the lesion if the occlusion is large enough. 40% of cases will have atelectasis, while 25% will show a central lesion on Chest X-ray.  Homogenous increased opacities with volume loss may also be found on radiographs. In roughly 20 % of cases, BCTs develop in the periphery of the lung identified as a peripheral solitary nodule.

Further investigation with computed tomography of the thorax can help identify smaller lesions of the tracheobronchial tree.  Common findings include contrast enhancement of the highly vascularized lesion and/or calcification. A new CT sign called "bronchial tree sign," as explained by Dr. Coruh et al. can be used to differentiate Ct findings of carcinoid tumors from hamartomas.[5][6][7] Rarely will carcinoids be found in mediastinal structures, and multifocal tumors are almost never seen.

Given the high likelihood of central lesions, bronchoscopy is often the most effective tool in diagnosing bronchial carcinoid tumors.  In conjunction, the measurement of biochemical markers in the body, such as urinary 5-hydroxyindoleacetic acid and serum chromogranin A can result in a more confident diagnosis.

To effectively differentiate typical and atypical BCTs, surgical specimens are preferred when compared to biopsy and cytology via the use of bronchoscopy. Differentiation is confirmed via immunostaining for neuron-specific enolase, serotonin, calcitonin, and bombesin. Mediastinoscopy is suggested only when there is moderate to high suspicion for atypical carcinoid tumors. Further imaging for metastases is also indicated should there arise high suspicion for atypical carcinoid given its more aggressive nature.

Complete surgical resection is the treatment of choice for bronchial carcinoids and usually confers a good prognosis, particularly in typical carcinoids.  Evidence has shown excellent survival rates of 5, 10, and 15 years of 92%, 88%, and 76% respectively. Atypical carcinoids carry a worse prognosis with a 5 and 10-year survival rate of 69% and 24 to 52%, respectively. Surgical interventions include radical resection via pneumonectomy, bilobectomy, lobectomy, and more conservative approaches such as segmentectomy, wedge resection, and sleeve bronchectomy. The majority of cases are localized, with resection leading to better outcomes.

Stage IV bronchial carcinoid tumors have a slightly different approach to management. Surgical resection alone is not sufficient for patients diagnosed with late-stage disease.  These patients are candidates for interventional radiology interventions in attempts to reduce the size of the tumor.  Somatostatin analogs are used in these procedures not only to decrease tumor mass, but they also have beneficial effects in the symptomatic management of neurosecretory effects of the disease.[8] The use of somatostatin analogs can stabilize tumor growth for several years while providing symptomatic relief.[9]

In patients with advanced disease, chemotherapeutic agents such as temozolomide and thalidomide, although still under clinical trials, have shown therapeutic benefits.  Other clinically studied chemotherapy options include radioisotope-labeled peptide receptor therapy with 131-MIBG, 90 Y-DOTA-TOC, or 177 Lu-DOTA-TOC have also shown promising results in their respective clinical trials. Further clinical trials with tyrosine kinase antibodies and inhibitors of the mTOR mammalian receptors are still currently under trial.[10][11]

Benign lesions of the lung can also be differentiated by category. Infectious granulomatous lesions such as histoplasmosis, coccidioidomycosis, tuberculosis, cryptococcosis, and blastomycosis. Benign neoplasms such as bronchial hamartomas, lipomas, fibroma, neurofibroma, leiomyoma, and angiomas. Vascular etiologies such as arteriovenous malformation, pulmonary varix, hematoma, and pulmonary infarct. Inflammatory origins such as granulomatosis with polyangiitis, rheumatoid nodule, or sarcoidosis. Other etiologies such as amyloidoma, round atelectasis, intrapulmonary lymph nodes, loculated fluid, and mucoid impaction should all be included in the differential.

Very few clinical trials have been performed in regard to the medical management of pulmonary, endocrine tumors because of its rarity.  However, there are ongoing randomized control trials such as Alliance A021602: CABINET. This trial is currently comparing the effects of cabozantinib vs. placebo for those patients with well-differentiated bronchial carcinoids. Other ongoing trials include an open-label phase II trial that is currently assessing the use of ipilimumab and nivolumab in advanced disease. The data from these studies are still being collected with anticipated results available in the near future. Ongoing studies such as these may highlight a much larger role of medical management as compared to surgical resection.[9]

Classification of bronchial carcinoid tumors is dependent on the observation of mitosis found within the histology of the specimen.  Typical carcinoids lack abnormalities in the expression of common tumor suppressor genes and are defined as observing less than 2 mitoses under microscopy of a 2 mm portion of a viable tumor.  In contrast, atypical carcinoids not only have known mutations or abnormalities in gene expression but consist of 2-10 mitoses, necrosis, or pleomorphism of the biopsied sample. Since changing the guidelines for typical carcinoid tumor classification in 1998, the 10-year survival rate of confirmed typical carcinoid tumors has increased to 87% compared to 73% previously observed [13]. TNM staging system and mitosis criteria again updated by the World Health Organization in 2015 are listed below in table 1.

Bronchial carcinoid tumors are classified under the World Health Organization (WHO) criteria, updated in 2015. These tumors range from typical carcinoids (TC), which are considered low grade, to high-grade tumors, which are very aggressive.

Although rare, at the time of biopsy or surgical resection of the lesion, the patient potentially can undergo a carcinoid crisis due to excess secretion of neurosecretory granules. This is combated with the use of somatostatin analogs. Carcinoid syndrome is a rare complication and not common with primary bronchial lesions without metastasis. Cushing’s syndrome may result as a result of excess ACTH production from neurosecretory lesions.[15] Rarely bronchial carcinoid tumors metastasize; however, there have been reported cases of suprasellar lesions as a result of metastasis.[16]

Education involving the patient, healthcare provider, and the general public in order to provide proper education and disease awareness to better patient outcomes.

Bronchial carcinoid tumors are a recurring issue in the medical field that is often overlooked due to its relatively nonspecific initial findings. It is greatly important that the pathophysiology of the disease is understood, and suspicions heightened for such a disease. Although surgical resection is the treatment of choice, it has already been proven that medical therapy has had a significant role in the disease course. Symptomatic relief and deterrence of disease progression will undoubtedly lead to improved patient outcomes, in particular to those patients who achieve earlier diagnosis. It is the ethical responsibility of the physician attending to the patient to provide the least invasive therapy when establishing treatment prior to recommending surgical resection. With an interprofessional approach throughout the disciplines of medicine, radiology, surgery, oncology, and pulmonology, there is no doubt that overall outcomes will continue to improve in the future. 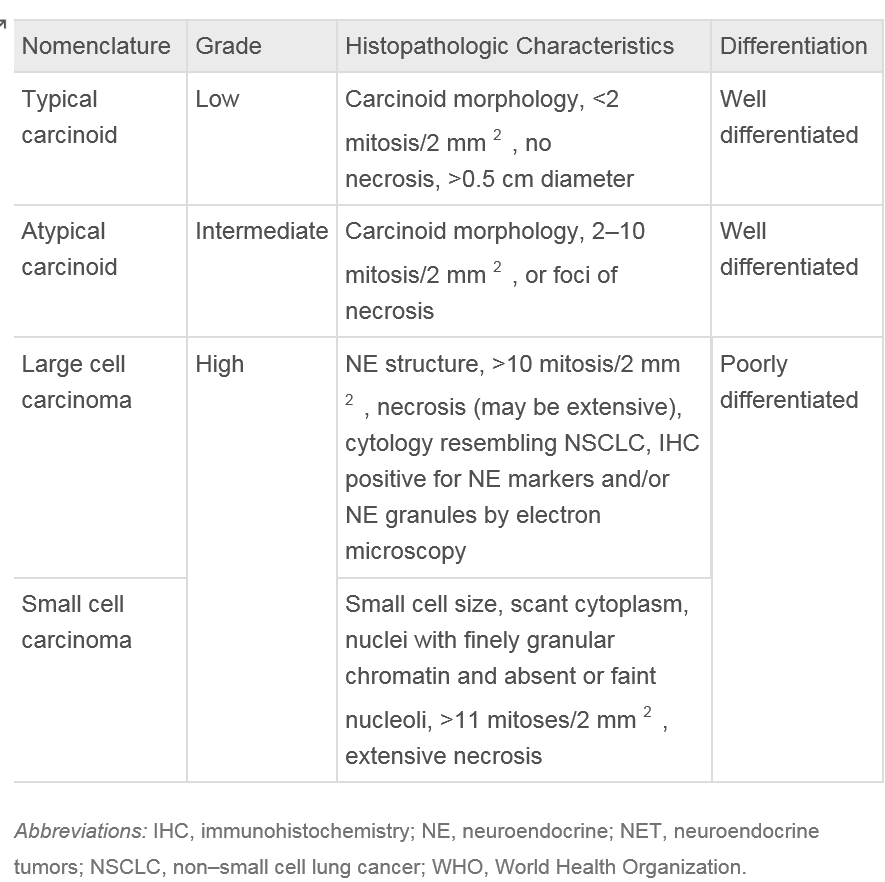 [Development of gustatory buds and its nervous fibers in the human tongue]., Brzezińska B,, Czasopismo stomatologiczne, 1977 Nov     [PubMed PMID: 32862320]