Cafe-au-lait macules (CALMs) are common pigmented lesions found in the general population. They can be described as well-circumscribed, pigmented macules or patches ranging from light to dark brown. Their size may range from a few millimeters to several centimeters (>20cm) and may appear at birth or early life. Multiple CALMs are often associated with genetic syndromes for which the patient and family members need to be evaluated by an interprofessional team. CALMs are mostly benign and are treated with laser therapy for cosmetic purposes. This activity reviews the evaluation and treatment of cafe-au-lait macules and highlights the role of the interprofessional team in evaluating and treating patients with this condition.

Cafe-au-lait macules (CALMs) are common hyperpigmented and flat skin lesions found in the general population. They are usually present at birth (congenital) or occur early in life. They may grow in number and size with age. The color varies from light brown to dark brown, and they may be present on any body parts, but the most common location is the trunk and the extremities. The term cafe-au-lait is a French word meaning "coffee with milk."

There are two main types of CALMs. CALMs with regular and clearly demarcated margins ("coast of California"), which is more common. They range in size from a few millimeters to several centimeters (>20cm) and may be present as solitary or multiple spots. The second type of CALM has an irregular margin ("coast of Maine"), which is less common and is usually larger and solitary. The "coast of Maine" pattern is seen in a segmental pigmentary disorder, while the "coast of California" pattern is seen neurofibromatosis 1 (NF1) and related conditions.

CALMs are seen in 95% of patients with NF1. Although solitary CALMs are common in the general population and are familial and inherited as autosomal dominant, multiple spots accompanied by other manifestations may indicate an underlying genetic disorder, and they require further evaluation. A family history of CALMs should be evaluated in any patient with multiple CALMs.[1][2]

The etiology of different conditions associated with CALMs include:

Most of the CALMs are present at birth or may appear early in life. CALMs present at birth may be difficult to visualize (Wood's lamp may improve visibility). In patients with NF1, the size and number of CALMs may increase with age. The prevalence of CALMs in newborns varies with race from 0.3% in whites to 18% in African Americans. In school-aged children, the prevalence varies from 13% in whites to 27% in African Americans. CALMs are more frequently seen in black children. While most of the children present with one or two CALMs, three or more CALMs are seen in 1% to 14% of the population.

The pathophysiology of CALMs is unclear. However, some studies show that hyperpigmentation is due to an abnormal expression of certain growth factors like stem cell factor and hepatocyte growth factor.

CALMs are caused due to increased melanin in melanocytes and basal keratinocytes. An increase in melanocyte density, an increase in stem cell factor cytokines, and giant melanosomes are noted in NF1 associated cafe au lait macules but are not specific for NF1.

It is important for a clinician to differentiate other pigmented disorders from cafe-au-lait macules. CALMs are mostly seen soon after birth or in early childhood, which may grow in size with time. CALMs may be solitary or multiple, and the margins may be regular or irregular. Solitary CALMs are common in the general population, while the presence of multiple spots requires a detailed evaluation of the patient. Multiple CALMs are often associated with genetic syndromes, most commonly NF1. Thus, a detailed history and physical examination findings in different genetic syndromes associated with multiple CALMs are listed below:

The most frequent disorder seen in association with multiple CALMs is NF1. The estimated population frequency of NF1 is approximately 1 in 3,500. It occurs with equal frequency in males and females and has been identified in all ethnic groups. It occurs due to a mutation in the NF1 gene and follows an autosomal dominant pattern of inheritance. The patient presenting with hyperpigmented skin lesions, difficulty visualizing objects, weakness or neurological deficits, headaches, and pain or deformity in the involved bone require immediate evaluation for NF1.

Diagnostic Criteria: At least two of the following should be present for diagnosing NF1

NF2 is a different disorder from NF1, both clinically and genetically. It occurs due to a mutation in the NF2 gene located on chromosome 22, which produces merlin (tumor suppressor gene) and follows an autosomal dominant pattern of inheritance. Its frequency is approximately 1 in 40,000 births. The clinical features of NF2 include bilateral acoustic schwannomas, cataracts, meningiomas, and ependymomas. The patient may present with a hearing problem, ringing in the ears (tinnitus), and dizziness.[4]

It is a rare genetic condition resulting from a mutation in the GNAS gene affecting G-protein signaling. The classical presentation is a triad of CALMs, fibrous dysplasia of the bone, and precocious puberty. Other endocrinopathies may be present in some patients like hyperthyroidism, hypercortisolism, and hypophosphatemic rickets.[5]

It is an autosomal dominant RASopathy. LEOPARD is an acronym referring to the clinical features which are essential for making a diagnosis. The clinical findings are lentigines, electrocardiogram conduction defects, ocular hypertelorism, pulmonary stenosis, abnormal genitals, retardation of growth, and sensorineural deafness.

CALMs are diagnosed clinically. While evaluating a child with multiple CALMs, it is important to know whether these lesions represent a marker of an underlying systemic disorder. Patients presenting with multiple CALMs (more than 6) should raise suspicion of a genetic syndrome, most commonly NF1. Skin freckling in the inguinal/axillary region and cutaneous neurofibromas can be seen in thorough skin examination. Ophthalmological examination with a slit lamp is equally important to identify Lisch nodules and signs of optic glioma. CALMs are usually distributed in a random pattern, but when found in a single body region, segmental NF1 should be suspected.

Patients with CALMs should be carefully examined for the features of other associated syndromes. Developmental history and progression of the child in school are important for diagnosing syndromes associated with CALMs. Genetic testing can be performed to confirm the diagnosis of suspected genetic syndromes associated with CALMs. For confirmed cases, family members should be evaluated further for findings like multiple CALMs, cutaneous neurofibromas, learning disabilities, skin tumors, spinal cord or brain tumors, etc.

A suspected case of NF2 should be further evaluated with magnetic resonance imaging (MRI) of the brain to know the location of the vestibular schwannoma as well as other tumors associated with NF2 such as meningioma and ependymoma.

A skin biopsy is usually not needed to confirm the diagnosis. On biopsy, an increased amount of melanin in the basal layer along with giant melanosomes can be seen in NF1-associated CALMs.[8]

Cafe-au-lait macules have no reported incidence of malignant transformation. Hence, treatment is generally not required unless the patient requests it for improved cosmesis. There has no medical treatment for CALMs until recently. Laser therapy is the mainstay of treatment for these lesions. The lasers that have been used for the treatment of CALMs are Q-switched neodymium:yttrium-aluminum-garnet laser (QSNd:YAG), Q-switched alexandrite laser, Q-switched ruby laser, Copper vapor laser, and Pigmented lesion dye laser. Multiple treatment sessions are required to clear the lesions. The risk associated with laser treatment includes hypopigmentation, transient/permanent hyperpigmentation, scarring, and incomplete clearance.[9]

Patients diagnosed with genetic syndromes are treated with an interprofessional team approach. These patients need to be evaluated by a team that includes a pediatric neurologist, dermatologist, ophthalmologist, geneticist, a specialized nurse, and an orthopedic surgeon. Genetic counseling for the family members and the patient is an important part of the treatment plan for the diagnosed case of CALMs associated with genetic syndromes like NF1 and NF2.[10][11]

CALMs should be first differentiated from the diffuse causes of hyperpigmentation like Addison's disease, hemochromatosis, and phototoxic allergic reactions. These conditions do not contain the well-demarcated, round borders, as seen in most of the CALMs.

The differential diagnosis of CALMs includes:

Cafe-au-lait macules are difficult to treat. Partial clearance may be achieved with laser treatment, but recurrence is common. CALMs are benign lesions with no reported morbidity or mortality, however, associated genetic syndromes may lead to the development of malignant tumors.[9]

One or two CALMs without any features of genetic syndromes are harmless. CALMs that are multiple and segmental may be a marker for many genetic syndromes. NF1 may lead to the development of malignancy like nerve sheath tumors, optic gliomas, and leukemias.[12]

Tuberous sclerosis may be associated with a cardiac tumor-like rhabdomyoma.[13]

Children suspected to have NF1 and NF2 should be evaluated by a team that includes a pediatric neurologist, dermatologist, ophthalmologist, geneticist, and an orthopedic surgeon.

Parents should immediately seek further evaluation if the child has: an undiagnosed pigmented lesion, more than six CALMs, CALMs and nodules on the skin, CALMs and a learning/language/developmental delay, and family members with multiple CALMs or a diagnosis of NF1.

For a patient diagnosed with NF2, annual history and physical examination should be done that includes cutaneous, ophthalmology, and audiology examination. Beginning at 10 years of age, annual brain MRI should be done for early detection of tumors associated with NF2.

Most children diagnosed with NF1 may suffer from learning difficulties, writing problems, and attention difficulties. Parents should be given education about these problems and ways to handle them. Rehabilitation programs should be considered for more serious ones.

Legius syndrome can present with similar clinical findings as NF1. It is estimated that 1% to 2% of the patients who meet the diagnostic criteria for NF1 actually have Legius syndrome. Thus, negative results for NF1 molecular testing should prompt a test for Legius syndrome, which is SPRED-1 testing.

Cafe-au-lait macules are benign lesions without any clinical significance, which are common in the general population. Multiple CALMs may be the hallmark for a genetic disorder that needs to be evaluated by an interprofessional team approach. A team consisting of a pediatric neurologist, dermatologist, ophthalmologist, geneticist, orthopedic surgeon, and a specialized nurse should be involved in the care of a patient with a suspected genetic disorder. Annual follow up is required to monitor the progression of the disease. 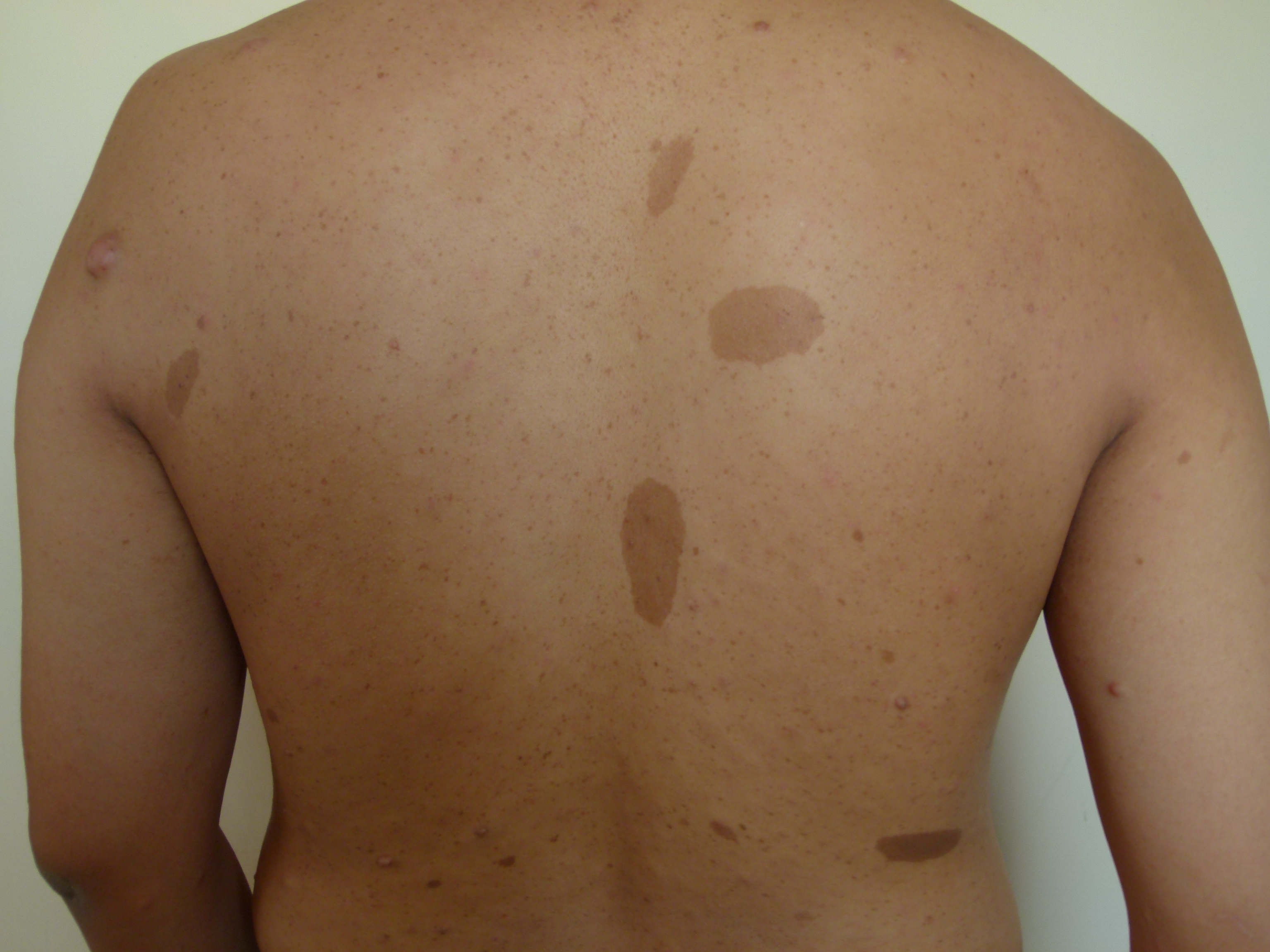 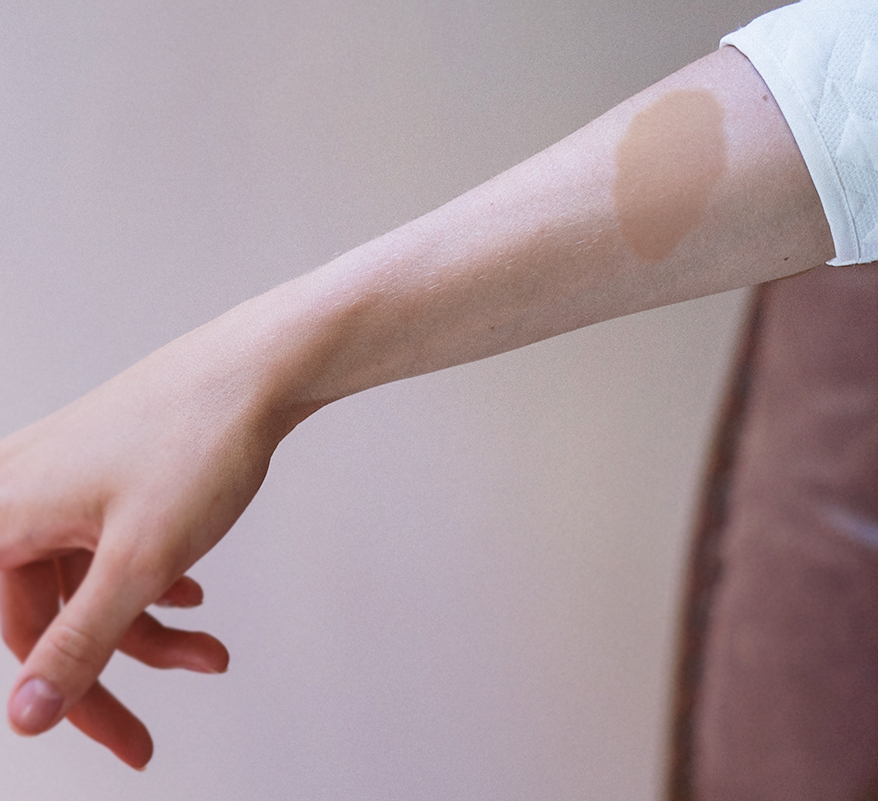 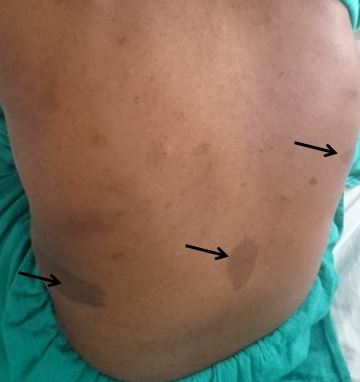