Bronchiectasis is a chronic lung disease characterized by persistent and lifelong widening of the bronchial airways and weakening of the function mucociliary transport mechanism owing to repeated infection contributing to bacterial invasion and mucus pooling throughout the bronchial tree. This activity reviews the evaluation and management of bronchiectasis and reviews the role of the interprofessional team in improving care for patients with this condition.

Initially, bronchiectasis was described in the early 19th century by Laennec. Bronchiectasis is a chronic lung disease characterized by persistent and lifelong widening of the bronchial airways and weakening of the function mucociliary transport mechanism owing to repeated infection contributing to bacterial invasion and mucus pooling throughout the bronchial tree.[1][2][3] Bronchiectasis is responsible for the significant loss of lung function and one that can result in considerable morbidity and even early mortality.

Historically, the most common cause of bronchiectasis was thought to be an antecedent respiratory infection, often during childhood. The causes are idiopathic, acquired, or infection-related.

Bronchiectasis predominance is not clearly understood. Global statistics suggest that the incidence of bronchiectasis has risen over the past few years. It can exist in any age group. However, it generally occurred in childhood during the pre-antibiotic period.[4] Recent evidence shows that bronchiectasis disproportionately affects women and older individuals, and may be contributing to an increasing healthcare burden.

The three most important mechanisms that contribute to the pathogenesis of bronchiectasis are recurrent infections, airway obstruction, and peribronchial fibrosis.

Neutrophils dominate airway inflammation in bronchiectasis, driven by high concentrations of neutrophil chemoattractants such as interleukin-8 (CXCL-8), and leukotriene B4. Airway bacterial colonization occurs because of impaired mucociliary clearance and because of the failure of neutrophil opsonophagocytic killing. Other mechanisms of immune dysfunction include the inability to clear apoptotic cells and invasion of T-cells, with recent reports leading to Th17 cells playing a significant role. Histologic changes in bronchiectasis include cartilage destruction and fibrosis, mucosal and mucous gland hyperplasia, inflammatory cell infiltration, and increased mucous and exudate.

History of a long-standing cough with purulence is typical of bronchiectasis. Patients may report repetitive pulmonary infections that require antibiotics over several years. Patients can also present with progressive dyspnea, intermittent wheezing, hemoptysis, pleuritic chest pain, and associated fatigue and weight loss. The hemoptysis is mild and manifested by blood flecks in the patient's usual purulent sputum, which is occasionally life-threatening. Often patients are diagnosed after many years of symptoms when a chronic cough or hemoptysis becomes debilitating.

General findings may include digital clubbing (2% to 3%), cyanosis, plethora, wasting, and weight loss.

Signs of complications/exacerbations, such as patchy densities due to mucoid impaction (mucus may become of high density due to chronic inspissation) and consolidation, volume loss secondary to mucoid bronchial obstruction or chronic cicatrization are also seen.

In comparison to chest x-ray, CT is both more sensitive and provides more specific information. In addition to making the diagnosis, the pattern of disease on HRCT may enable one to limit the differential to a single/few specific causative entities.

The CT chest signs of bronchiectasis were first described by NAIDICH et al. in 1982. Multidetector computed tomography (MDCT) is preferred over high-resolution computed tomography (HRCT) as it can obtain thin sections of 1 mm (high resolution). HRCT is performed when MDCT is not available.

Bronchial dilation, the cardinal sign of bronchiectasis, is characterized:

Usual Pattern on CT scan of the Chest

Varicose: Implies non-uniform bronchial dilatation. The bronchi resemble varicose veins. The luminal dilatation is characterized by alternating areas of luminal dilatation and constriction, creating a beaded appearance, and the wall thickening is irregular. This varicose bronchiectasis serves as an intermediate step before the development of grossly dilated cystic airways.

Cystic or saccular: A cluster of thin-walled cystic spaces.

Mosaic lung attenuation: The terminology is used to characterize heterogeneous lung density in the damaged lung segments owing to air trapping and hence has a geographic distribution. On expiration, this result can be produced or exaggerated.

Dilated bronchial arteries: These are best-demonstrated post administration of intravenous contrast. These tortuous vessels extend along the central airways toward the hila. It is these vessels that are often responsible for hemoptysis.

Mycetoma formation (Fungus ball): Aspergillus fumigatus (a fungus) may colonize dilated airways or bullae/cavities. It is a major source of hemoptysis.

Bronchiectasis is treatable but rarely curable.

1. Identifying and treating the underlying cause: Immunoglobulin replacement, steroids, antifungals for ABPA, treatment for NTM, and CF all represent opportunities to treat the underlying cause specifically, and systematic testing of all patients is recommended in consensus guidelines.[9][10][11]

2. Improve tracheobronchial clearance: Most physicians recommend mucus clearance as the mainstay of therapy in bronchiectasis, Postural drainage consists of adopting a position in which the uppermost lobe is drained, and should be performed for a minimum of 5 to 10 minutes twice a day. Efficiently performed, this is of great value both in reducing the amount of cough and sputum and in preventing recurrent episodes of bronchopulmonary infection.

Deep breathing followed by forced expiratory maneuvers (the "active cycle of breathing" technique) is of help in allowing secretions in the dilated bronchi to gravitate towards the trachea, from which vigorous coughing can clear them. "Percussion" of the chest wall with cupped hands may help to dislodge sputum, and a number of mechanical devices are available, which cause the chest wall to oscillate, thus achieving the same effect.

3. Control infection: The choice of antibiotic should primarily be based on the results of culture and sensitivity. When no specific pathogen is identified, and the patient is not seriously ill, an oral agent like amoxicillin, co-amoxiclav, or macrolides for 2 weeks is sufficient.

Use a higher dose of oral amoxicillin 1 gm twice per day for 2 weeks, especially if colonized with H. influenza. If pseudomonas-colonized, then a 2-week course of ciprofloxacin 750 mg twice per day (with cautious use in the elderly) is reasonable.

For patients with moderate-to-severe symptoms, parenteral antibiotics, such as an aminoglycoside (gentamicin, tobramycin), antipseudomonal synthetic penicillin, a third-generation cephalosporin, or a fluoroquinolone, may be indicated.

Maintenance therapy with intermittent antibiotics is not used routinely in patients with non-CF bronchiectasis, and the decision to use long-term antibiotics should be individualized.

Inhaled aminoglycosides can be of benefit in chronic non-CF bronchiectasis; however, the treatment needs to be of sustained duration.

5. Lifestyle modifications: As with other respiratory diseases, patients with bronchiectasis should be encouraged to stop smoking. Vaccination against influenza and pneumococcal disease is also recommended.

The disease is progressive when associated with ciliary dysfunction and cystic fibrosis, and eventually causes respiratory failure in other patients. The prognosis can be relatively good if postural drainage is performed regularly, and antibiotics are used judiciously.

Bronchiectasis is a progressive disorder with no cure. Hence it is best managed by an interprofessional team that includes the primary care physician, nurse practitioner, pulmonologist, infectious disease expert, thoracic surgery, and an internist. The key is to improve symptoms and prevent relapses.[12][13] These patients often develop respiratory infections that require antibiotics. At some point, most patients develop complications that include pneumonia, lung abscess, empyema, septicemia, cor pulmonale, respiratory failure, secondary amyloidosis with nephrotic syndrome, and recurrent pleurisy.

The disease is progressive when associated with ciliary dysfunction and cystic fibrosis and eventually causes respiratory failure. In other patients, the prognosis can be relatively good if postural drainage is performed regularly, and antibiotics are used judiciously.[7] 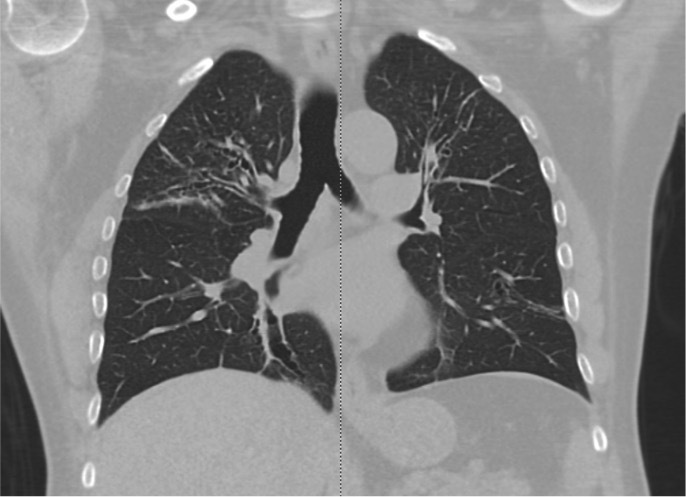