Breast implants are used for breast augmentation in aesthetic as well as oncoplastic surgery. The various types of implants over the years have had different advantages and disadvantages, which have evolved into advanced modern-day implants. This activity explains the indications, types, complications, evaluation, and management of patients with breast implants. It highlights the role of the interprofessional team in treating and decreasing long term morbidity in patients with breast implants.

Enhancing breasts go back to 1895 when Czerny attempted fat transfers. This has been followed by paraffin injections, as well as the use of glass balls and ivory. In the 1950s, commercially manufactured sponge implants were introduced, made from a variety of chemicals. This was plagued by contractures, infection, and erosion. Due to the complications, enhancement surgery was not popular until the 1960s when commercially manufactured silicone gel implants were introduced.

Silicone use in augmentation began in the 1940s as silicone became more widespread in its use following World War II to where it was used in medical devices in the 1950s.  It's been suggested that silicone was injected into women's breasts in WWII that often migrated away from where it was placed, leading to many complications, including pain and loss of the breast.  In 1962, Dr. Thomas Cronin designed a shell to contain the silicone gel and with the Dow Corning Corporation in 1963, produced the breast implant as we know it today.  Saline implants were available as well once shells were used for containing the fill, but saline implants were known to ripple more and have a higher failure rate (estimated more than 75%) as well.

Implants have gone through a myriad of styles and design changes starting with external patches and polyurethane coated shells, to softer gel fills, to newer designed shells to diminish diffusion of the silicone oil through the shell, all in responses to the problems that were encountered with the patients. Gel also was made more cohesive, where the gel tended to stick together rather than break off into particulates that could disseminate into adjacent tissues.

In the mid-2000s, cohesive gel implants were introduced and allowed by the FDA. Varying levels of cohesiveness were also being experimented with to where we now have highly cohesive, form-stable implants in both the textured anatomic and smooth round designs, cohesive gel in textured or smooth round implants, and round saline implants in textured or smooth surfaces. Just recently, the structured (bi-lumen) Ideal implant has been introduced and is available for use.  All companies offer comparable warranties for rupture and capsular contracture.

The breast implant controversy peaked in the early 1990s when Connie Chung aired a segment suggesting implants were causing autoimmune diseases after anecdotal reports were linking gel implants with systemic diseases such as connective tissue disorders and even cancer. Due to safety concerns and lack of clinical studies to support the safety of the devices, the FDA issued a moratorium on the use of gel implants. This led to a class-action lawsuit that was settled in 1994 and led to the chapter 11 bankruptcy of Dow Corning. Saline implants were the only type that was available until the return of gel implants in the mid-2000s.[5][6][7][8]

In 2000, the Institute of Medicine published its summary findings of all the research done on implants. They concluded that there was no evidence that silicone implants caused any systemic diseases and that implants do not last forever. Despite many attempts to refute this, no new evidence to the contrary has been found. In March of 2017, the FDA did issue a warning that there was a link between textured implants and anaplastic large cell lymphoma. This is now called breast implant-associated anaplastic large cell lymphoma or BIA-ALCL, and the risk of having this occur was estimated to be 1:30,000.[9]

To the best of our knowledge, and since publication from the Institute of Medicine in 2000, there is no evidence to suggest any relationship between silicone and systemic diseases of the whole body. Despite continued research, there is no new evidence to suggest otherwise. It is also important to understand that implants do not last forever and that having an augmentation will require more surgery in the future to maintain results or to deal with complications such as contracture or malposition of the implant. More recently, women have been claiming breast implant illness (BII), motivating them to have "en block" removals. Still, there remains no evidence that there is an identifiable link between implants and BII, except for these anecdotal reports.[10]

Implants must be placed in a sterile environment. Implants should be bathed in an antibiotic solution before completely exposing the implant from its packaging to minimize risks for the static attraction of foreign particulates before insertion. Saline implants should only be filled using closed systems where the saline is never exposed to the air to eliminate risks for contamination of the saline. This is accomplished using intravenous (IV) tubing from the source bag to the syringe to the fill tube.

With silicone breast implants, this capsule can camouflage a breast implant rupture, as the silicone will remain trapped within the capsule and show no signs of change. This is called a silent rupture and the reason why the government recommends getting an MRI every two years to evaluate the integrity of the implant. This s not a mandate, and most patients do not follow this unless concerns or issues arise as it is often not covered.

Ultrasound, mammogram, and MRI may be necessary for evaluating rupture concerns as well as implant displacement mentioned prior to physical exam for gel implants. Saline implant failure is obvious as one mound will become noticeably smaller. If in doubt, have the patient use a molded cup bra that does not stretch and examine her mounds weekly or monthly in the molded cup bra. If there is a leak of any kind, space in the cup will increase as the implant volume diminished from a failing saline implant.

Surgical intervention with a replacement of the ruptured implant is recommended if rupture is suspected or documented on radiographic studies or clinical exam, and the patient wishes to maintain her breast volume. If she does not, explant alone may be considered, and in some cases, mastopexy may be needed to produce the best outcome possible.  Deflated saline shells may be left in the breast as long as not problematic or symptomatic, and consideration must be given to repairing muscle origins of the pectoralis major if a submuscular placement was originally done in attempts to minimize or resolve the animation that resulted from submuscular placement.[11][12][13]

Breast implant surgery demand continues to increase annually.  Implants available for implantation include saline and gel implants of differing shapes, textures, and profiles. A newer baffled, dual-lumen saline implant has just been introduced to provide the characteristics of a gel implant without any risks of having silicone gel, but their profile is currently limited to high profile styles, and they are working on introducing a moderate profile in the future.  All implant shells are still manufactured from silicone, so exposure to silicone is not eliminated. Implant choice depends on many variables, including anatomy, tissue thickness, patient desires, and surgeon preferences, and excellent outcomes have been achieved.

There is a small but vocal group advocating silicone poisoning, and this is diagnosed by sending in tissue to their lab where the diagnosis is established. They provide treatment products that patients can pay for out of pocket. Mainstream science has not supported their contentions, but patients who believe in this need extra attention and empathy when trying to outline a treatment plan for them as they often want surgeons who also believe in what they believe.

Implant companies have many statistics to show that their product is better than the competition. Still, in the end, if one product were truly better than the others, it would emerge as the dominant product and the implant of choice for all surgeons. That has not yet happened.

In March of 2017, the FDA released a statement that confirms a relationship between implants and the development of anaplastic large cell lymphoma. Information released by the American Society of Plastic Surgeons shortly after the FDA announcement reported the following information. This is a T-cell lymphoma that is not breast cancer. The studies suggest that textured implants are the only common thread with this phenomenon that is estimated to occur 1:30,000 worldwide, but smooth-surfaced implants cannot be excluded from this. Anaplastic large cell lymphoma has been seen with both saline and gel implants. This usually presents as a delayed seroma or acute expansion of the mound once the patient has recovered from the procedure itself. Diagnosis requires fluid aspiration and immunohistochemistry and should be discussed with the pathologist, so the proper studies on the fluid are done to rule this out or confirm the diagnosis. A multidisciplinary approach is recommended if this diagnosis is made with PET/CT and MRI helpful in management. If there is no spread, a complete capsulectomy with implant removal is considered curative as incomplete capsulectomies have been associated with recurrence and a poorer prognosis.

Plastic surgeons primarily insert breast implants, but the follow up may be by the nurse practitioner or primary physician. When patients seek a breast implant, the primary care providers should have some knowledge about the implants.

Implants come in varying profiles of the same volume, which changes the shape and base width with each profile. Implants are selected based on anatomic measurements taken during consultation while accounting for the volume you desire. Patients should be informed of the benefits and risks of the different cohesivities, fillers, styles, shapes, and surfaces of the implants and make a choice that is best for them. As for what brand surgeons use, it truly is personal preference, often guided by the service provided by the manufacturer or the surgeon's experiences. The outcomes for most patients who undergo implants are good to excellent.[14]

Plastic surgery nurses are involved in patient education and follow up, informing the interprofessional team of important changes in patient status. [Level 5] 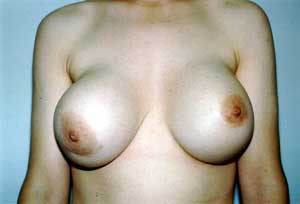