The blood-brain barrier is the barrier between the cerebral capillary blood and the interstitial fluid of the brain. It is made up of capillary endothelial cells and basement membrane, neuroglial membrane, and glial podocytes, i.e., projections of astrocytes. These 3 components work in synchronicity with one another to limit the entry of various substances into the cerebral blood flow and subsequently the brain parenchyma.

Central nervous system (CNS) structures are highly unique in structure and function, and therefore require a stable environment with a composition that differs from that of the peripheral circulation. For this reason, the blood-brain barrier exists to maintain a homeostatic environment in which CNS structures can function without disruption from other bodily functions. It functions as a semipermeable membrane that separates the peripheral blood from the cerebrospinal fluid (CSF) to maintains homeostasis within the central nervous system. It accomplishes this through several mechanisms that regulate the composition and volume of the cerebral structures.

The blood-brain barrier has several important functions that ensure a homeostatic environment within the CNS.

It does so primarily by regulating the composition and volume of the cerebrospinal fluid (CSF) which surrounds structures within the CNS. It does so by utilizing tight junctions between endothelial cells lining the capillaries, highly specific transport proteins that are embedded into the basement membrane, and cellular enzymes that function to alter substances during passage through the cells.

The blood-brain barrier also prevents the entry of toxins and foreign substances from entering the CNS.

Receptor-mediated transport allows glucose, ions, and other special molecules to cross the blood-brain barrier. Most large molecules and proteins are precluded from entering the barrier.

The development of the blood-brain barrier begins with angiogenesis, in which preexisting vessels, guided by vascular endothelial growth factor (VEGF), invade a developing neuroectoderm and give rise to new vessels. These new vessels forming in the neuroectoderm begin to exhibit many properties of the blood-brain barrier even at early stages, including expression of tight junctions and nutrient transporters that will later play a role in the selectivity of this physiologic barrier. The early vessels also contain high levels of transcytotic vesicles and exhibit high expression of leukocyte adhesion molecules (LADs).[1]

The barrier properties of the blood-brain barrier mature as endothelial cells of the perinuclear vascular plexus develop tight junctions and associate themselves with endothelial cells in utero between days 11 to 13 of gestation. These barrier properties include the formation of tight junctions, decreased transcytosis, downregulation of leukocyte adhesion molecules, and increased expression of efflux transporters in the cellular membrane. The final step in the maturation of the blood-brain barrier is the sealing of inter-endothelial tight junctions.[2]

The blood-brain barrier is considered to be weaker in some areas, and thus these areas are more susceptible to changes in levels of metabolites in the blood.[3]

Trans-urethral resection of the prostate (TURP) syndrome is a rare and potentially life-threatening complication of TURP procedures, in which the patient may develop dilutional hyponatremia. During resection of the prostate, a significant volume of fluid may be absorbed through open venous channels into the bloodstream. If the surgeon uses either sterile water or glycine as an irrigant during surgery, the patient may develop intravascular volume dilution and subsequent hyponatremia. Patients with an early diagnosis of this complication can have treatment initiated early before the lowered sodium concentration crosses the blood-brain barrier, and the brain detects the hyponatremia.[4][5]

Vasogenic edema can occur with disruption of the integrity of the blood-brain barrier. Such disruption can cause fluid shifts from the vascular compartment to the extracellular compartment. According to the Monro-Kellie doctrine, the sum of the volumes of the brain tissue, CSF, and intracranial blood is constant. Any increase in one of these 3 components will always be at the expense of the other 2. In the case of vasogenic edema, volume shifts into the extracellular compartments of the brain will cause increased intracranial pressure, resulting in compression of brain structures and vasculature.[6]

Normally, ammonia enters the portal circulation and is converted by the liver to urea. However, when a hepatocellular disease is present, for example, in patients with hepatic encephalopathy, ammonia does not get converted to urea; it is instead shunted through the portosystemic collateral vessels into the systemic circulation, where it traverses the blood-brain barrier and induces neuronal edema and resultant hepatic encephalopathy. ATP-binding cassette (ABC) transporters prevent the brain from accumulating toxins by pumping them out of the brain. Accumulation of toxins such as ammonia during hepatic encephalopathy or other cases of severe liver disease supports the conclusion that liver diseases alter the expression and function of ABC transporters at the blood-brain barrier. There is growing evidence to suggest that altered ABC transporter expression is implicated in the development of hepatic encephalopathy.[7]

The blood-brain barrier is impermeable to hydrogen ions and bicarbonate; therefore, these ions become trapped in the vascular compartment and do not enter into the cerebral circulation. However, the blood-brain barrier is permeable to carbon dioxide (CO2). CO2 can pass into the brain and become converted into hydron and bicarbonate molecules. In this way, increases in arterial CO2 (PCO2) result in increases in the PCO2 of the CSF, which ultimately leads to increased H+ concentration in the CSF and a consequent decrease in pH.[8]

Many vasoactive substances do not affect cerebral circulation because they cannot cross the blood-brain barrier due to their large molecular size. Leptin, a molecule secreted by adipocytes, can cross the blood-brain barrier and act on neurons of the arcuate nucleus of the hypothalamus to stimulate anorexigenic neurons and inhibit orexigenic neurons, resulting in decreased appetite and increased energy expenditure.[9]

Dimethyl fumarate is a drug used to treat multiple sclerosis. It works by reducing the transendothelial migration of activated leukocytes through the blood-brain barrier. It also has neuroprotective effects via the activation of antioxidant pathways.[10][11]

The use of contrast agents (e.g., gadolinium) can identify a breakdown of the blood-brain barrier in patients with acute multiple sclerosis exacerbations.

Neuromyelitis Optica, or "Devic disease," is a disease involving the synchronous or near-synchronous development of bilateral optic neuritis and spinal cord demyelination. It results in elevated serum levels of aquaporin 4 antibodies (AQP4 antibodies). AQP4 is a protein found in astrocytic foot processes surrounding blood vessels that are involved in the maintenance of the blood-brain barrier.[12]

Physostigmine is an inhibitor of acetylcholinesterase (AChE) that acts at the catalytic site with the substrate and competes with substrate binding to the AChE enzyme. It can cross the blood-brain barrier.[14]

Examples of drugs that can penetrate the blood-brain barrier to treat CNS infections[15][16]: 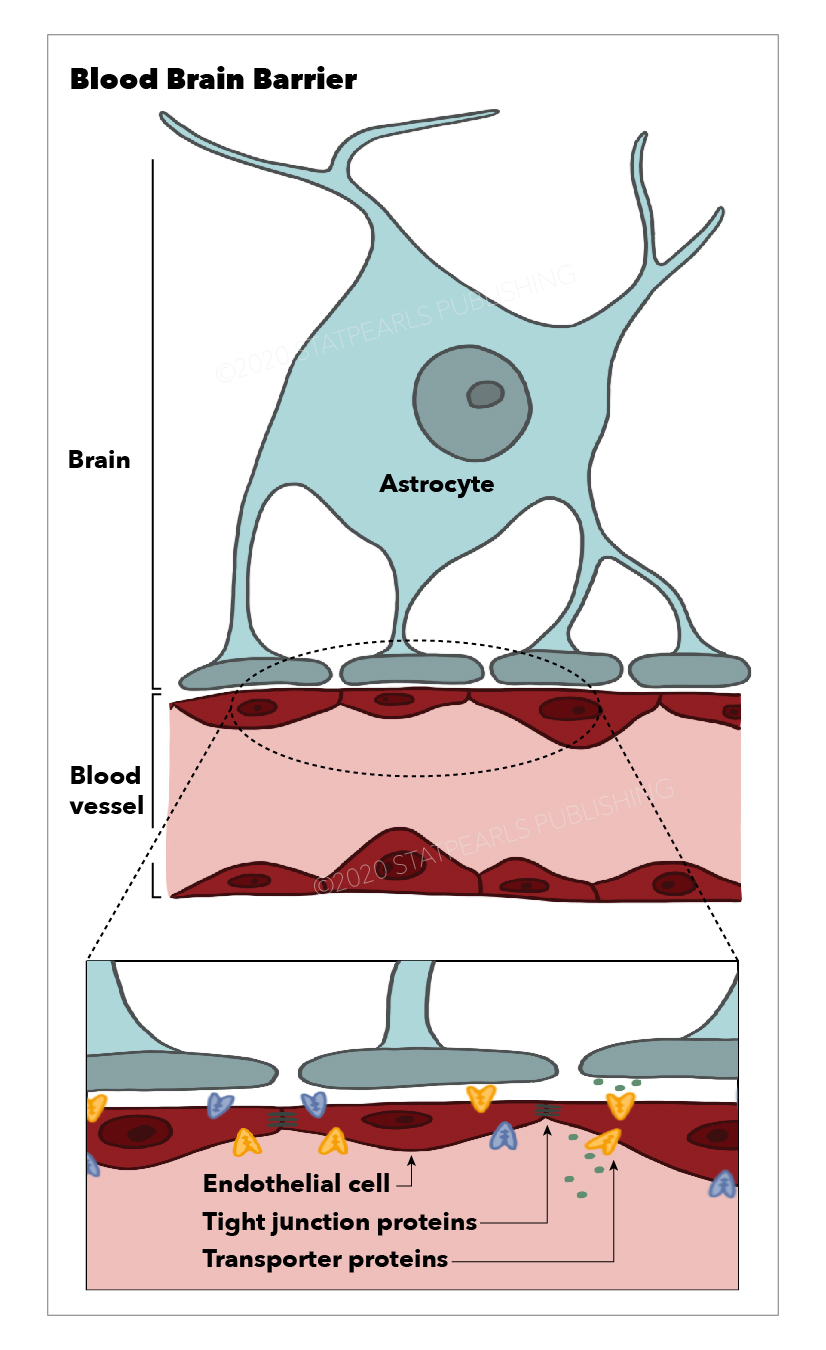