A bicornuate uterus is a uterine malformation that is produced due to impairment in the fusion of Mullerian ducts. The bicornuate uterus is a rare anomaly, but it is associated with worse reproductive outcomes; recurrent pregnancy loss and preterm labor are most common. To avoid the obstetric complications related to this anomaly, a high suspicion should be maintained for adolescents presenting with menstrual complaints. Diagnosis should be followed by aggressive prenatal monitoring or surgical unification depending on an individual basis. This activity reviews the evaluation and management of bicornuate uterus and highlights the role of the interprofessional team in evaluating and improving the care of patients with this condition.

American Society of Reproductive Medicine further reorganized the classification in 2016 and included arcuate uterus and healthy uterus in a single class.[2]

A bicornuate uterus is a result of a partial fusion of Mullerian ducts resulting in a heart-shaped uterus instead of a pear shape. It is further segregated into two types depending upon the partition of the cervix:

The etiology behind variation in the fusion of Mullerian ducts is still unclear though it could be multifactorial comprising of genetic as well as environmental factors. Studies have linked the uterine anomalies to an abnormality in gene expression. Several genes, such as Pax, Lim1, Emx2, Wnt4, Wnt9b, are involved in the development of Mullerian ducts during morphogenesis. A subset of homeobox genes, along with Wnt7a, regulates the differentiation of Mullerian ducts. Wnt7a is responsible for the expression of Hoxa 10 and Hoxa 11 genes. This segmental expression of Hoxa 9, 10, 11, and 13 along the Mullerian duct in a linear pattern is essential for the differentiation of ducts into fallopian tubes, uterus, cervix, and vagina.[3] HOXA13 mutations have also been found in hand-foot-genital syndrome, the characteristic features of this condition are limb malformations along with urogenital abnormalities, including Mullerian fusion anomalies.

The environmental factors can also be responsible; for instance, the development of T shaped uterus (class VII of the American Society of Reproductive Medicine) is attributed to the exposure of diethylstilbestrol during pregnancy, especially during pregnancies in the 1940s to the 1970s. Nonetheless, the incidence of this disease is decreasing as the drug is no longer in use now.[4]

Two genital ducts lead to the formation of the female genital tract, one is the mesonephric duct/Wolffian duct, and the other is the paramesonephric duct/ Mullerian duct. The entire procedure happens in three phases-

If there is impedance during the second stage-fusion of Mullerian ducts leading to partial fusion of the ducts, it results in the bicornuate uterus. This combination can vary. On the off chance that the outcome is a solitary vagina yet separate cervix with separate uterine cavities, it is called bicornuate bicollis. However, it is termed as bicornuate unicollis uterus; the uterine cavities are discrete, but the cervix and vagina are single.

Most of the patients with bicornuate uterus do not have any symptoms in their adolescence. Some women may present to the clinic with menorrhagia or dysmenorrhea owing to the presence of two uterine cavities. A few women are also diagnosed when they present for routine evaluation during pregnancy. A significant number of women are diagnosed when they present with obstetric complications, as mentioned beforehand. Physical exam in isolated anomalies is usually insignificant.

A longitudinal vaginal septum exists in 25% of cases associated with a bicornuate uterus, which may lead to obstructive symptoms or dyspareunia. The patient may present with an inability to control menstrual bleeding with tampon in such cases.[11] The physical exam reveals a vaginal septum, which on removal exposes a double cervix and uterus.

Renal anomalies are frequently found in affiliation with Mullerian anomalies due to the interlinked development of mesonephric and Mullerian ducts along with urogenital sinus. The most common defect is renal agenesis associated with didelphys uterus.  However, it can also present along with the bicornuate uterus. An ectopic ureter can also be found.[12]

Bicornuate uterus with non-communicating uterine cavities, associated with renal agenesis and blind hemivagina, present with acute urinary retention, pelvic pain, and dysmenorrhea. On a physical exam, a bulge can be found in the vagina, making it challenging to explore the cervix.[13]

In another variant, a communicating bicornuate uterus can exist with renal agenesis and hemivagina. In such cases, patients present with a Gartner duct pseudocyst. On physical exam, a cyst is present in the anterolateral wall of the vagina, which indeed is blind hemivagina. A bicornuate uterus can also exist with the non-communicating uterine horn. Such patients can present with infertility in consequence of endometriosis due to retrograde menstruation.[14]

Imaging plays an essential role in the diagnosis and management of bicornuate uterus. There are multiple modalities available for this purpose which are as follows-

The decision to manage a patient with the bicornuate uterus is pertinent to the presentation of the patient. A patient can present to a facility in 2 different ways:

If a woman presents for a routine evaluation during her pregnancy gets diagnosed with a bicornuate uterus, then aggressive prenatal monitoring is indicated to prevent obstetric complications. Pay attention to the signs of preterm labor, malpresentation.[11]

A patient can additionally present with a history of recurrent abortions or preterm labor in preceding pregnancies. The presentation mentioned above is an indication for the surgical unification of uterus, Strassman metroplasty.[11] The procedure was first illustrated in 1907 by Strassman in 4 stages. The procedure initiates by making a transverse incision over the fundus of the uterus, staying away from uterotubal junctions to avoid injury. Subsequently, the uterine cavity is opened, and the septum is removed after splitting the partition. Thus the procedure transforms the double cavity into a single cavity. Ultimately the cavity is closed by vertical suturing to prevent endometrial adhesions.[18]

The laparoscopic approach is being preferred in the present in place of abdominal metroplasty. The laparoscopic approach provides leverage in terms of less bleeding and decreased rate of infections. It also reports significantly reduced postoperative adhesion formation, which can be credited to a decrease in tissue handling and drying of tissues.[19]

Strassman metroplasty is indicated in women with recurrent abortions. In a prospective study done over seven years, open Strassman's metroplasty reports improvement in the fetal viability from 0 % to 80%.[20]

Patients with a bicornuate uterus can present with several unfortunate complications.

The most common complication associated with the bicornuate uterus is preterm labor. A cervical length of less than 25 mm on transvaginal ultrasound has 13 times higher risk of preterm delivery.[21] Cervical cerclage is an effective method to prevent a non-viable preterm delivery in women.[22]

A pregnancy in a bicornuate uterus can also be succeeded by postpartum hemorrhage. Postpartum hemorrhage is manageable by an assortment of surgical and nonsurgical alternatives. The nonsurgical methodology of utilizing Bakri Balloon is proved to be viable in the bicornuate uterus. However, the surgical approach, for instance, B lynch suturing, and conduit ligation can harm the neighboring structures. Moreover, ligation may not be effective with the collateral blood supply of uterus in pregnancy.[23]

A bicornuate uterus is a risk factor for rupture of the uterus even in a primigravida. The explanation could be an abnormal development of the lower fragment of the uterus or the presence of a fibrous band between the corpora of the uterus. This band restrains the uterus, unable to expand, and hence gets inclined to rupture.[24]

Due to the association of uterine anomalies with renal anomalies, a woman is at high risk for pregnancy-induced hypertension during her gestational period. Thus it is essential to monitor blood pressure during pregnancy in a woman with bicornuate uterus.

Although bicornuate uterus is not an independent risk factor for endometrial cancer but cancer in endometrium can go undetected. If taken from the healthy uterine cavity, a biopsy can give false-negative results, leading to a delay in diagnosis and worsening the prognosis of the patient. MRI can play an essential role in diagnosing the disease if a patient with bicornuate uterus presents with uterine bleeding.[25]

A bicornuate uterus is a rare oddity; it is fundamental to educate a woman diagnosed with this anomaly. A vast majority of the women are diagnosed during gestation, so it is crucial to counsel them about reproductive outcomes. Along with aggressive prenatal monitoring, she should be educated about the signs of preterm labor. Cautioning her about uterine rupture during labor is additionally fundamental. Malpresentations being very common during pregnancy in the double uterus, she should be advised to prepare for a cesarean section in the future.

A primary care provider should maintain a high suspicion for anomalies in adolescents who exhibit menorrhagia with dysmenorrhea. This can lead to early diagnosis of the abnormality and, thus, better reproductive outcomes in the future.

Management of bicornuate uterus requires clear differentiation of this anomaly from septate and didelphys uterus. Only an experienced radiologist with knowledge about embryology of the uterine anomalies and different associations can make a definite diagnosis.

A woman with a bicornuate uterus can present to the clinic with recurrent pregnancy loss. As a rare anomaly, the role of a gynecologist is to increase the patient's awareness regarding her diagnosis and make her aware of the linked complications. Comprehensive counseling of women diagnosed with the bicornuate uterus is very crucial. Women who experience recurrent pregnancy loss can suffer from anxiety or depression. The psychiatrist plays an essential position in such a circumstance. 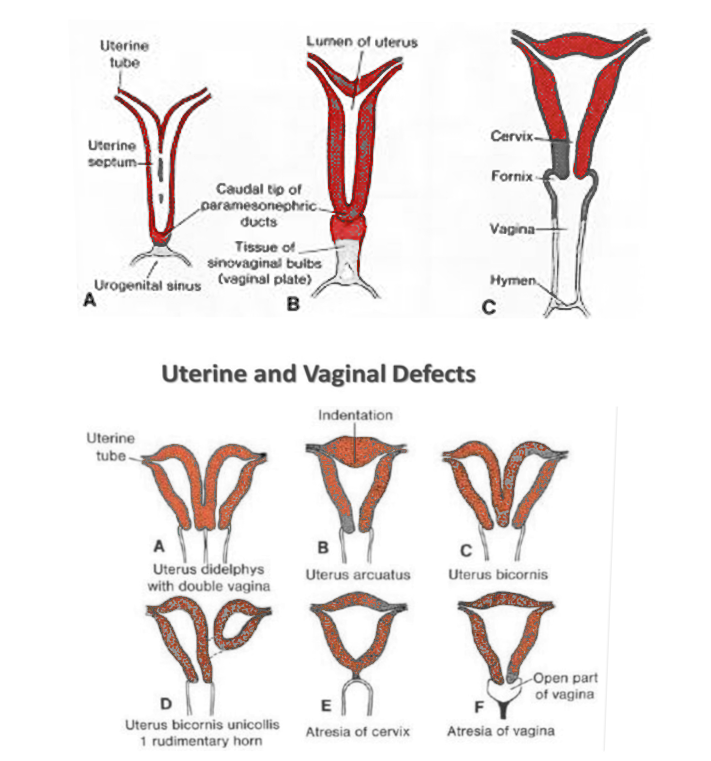 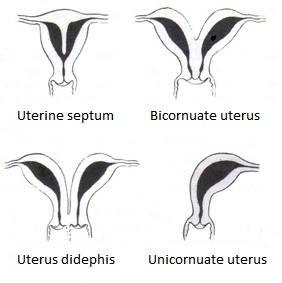 Types of Bicornuate Uterus malformation. A uterine malformation is a type of female genital malformation resulting from an abnormal development of the Müllerian duct(s) during embryogenesis. The prevalence of uterine malformation is estimated to be 6-7% in the human female population. They may cause premature birth. Didelphis and bicornuate uterus are the normal anatomy in some mammals, just not in humans.
Contributed by Wikimedia User: EternamenteAprendiz (CC BY-SA 4.0 https://creativecommons.org/licenses/by-sa/4.0/deed.en)

Deutch TD,Abuhamad AZ, The role of 3-dimensional ultrasonography and magnetic resonance imaging in the diagnosis of müllerian duct anomalies: a review of the literature. Journal of ultrasound in medicine : official journal of the American Institute of Ultrasound in Medicine. 2008 Mar     [PubMed PMID: 18314520]