Bancroftian filariasis is a leading cause of disability worldwide and a significant public health problem. The chronic sequelae of the disease are crippling. This activity outlines the epidemiology, symptomatology, and management of the ailment and highlights the role of the interprofessional team in coping with the morbidities of the disease and working towards its eradication.

Bancroftian filariasis, accounting for 90% of the lymphatic filariasis cases, is one of the most common etiology of acquired lymphedema. It is the second leading infectious cause of disability worldwide after leprosy.[1][2] The disease primarily involves lymphatic system with clinical manifestations ranging from acute, such as acute adenolymphangitis, filarial fever, tropical pulmonary eosinophilia to chronic, such as hydrocele, lymphedema, and elephantiasis in the most severe of cases.[3]

In filariasis, there is chronic inflammation of the lymphatics, leading to fibrosis, which eventually leads to lymphedema. While the legs are involved in most cases, the lymphedema can also involve the genitals, arms, and breasts.

The causative agent of the disease is the roundworm, Wuchereria bancrofti.[4][5] It multiplies inside human lymphatics releasing immature larvae known as microfilariae into the bloodstream. Mosquitoes ingest these larval forms when they feed on infected human blood and spread the disease to the other people via their bite.[6]

Bancroftian filariasis is a chronic neglected tropical disease endemic in over 72 countries. These endemic regions include South East Asia, Sub Saharan Africa, islands of Pacific, and selected areas in Latin America. An estimated 70 million people in the world suffer from lymphatic filariasis with Wuchereria bancrofti accounting for more than 90% of the cases.[7][8] There are approximately 36 million people worldwide rendered morbidly ill by the disease with up to 25 million people suffering from hydrocele and 15 million from debilitating lymphedema.[9]

The disease holds paramount epidemiological significance as World Health Organization (WHO) plans to eliminate it by 2020.[8][10] This effort will not only prevent unnecessary suffering but also contribute to the reduction of poverty as the expenditure on dealing with the morbidities is enormous.

The life cycle of Wuchereria bancrofti is extant in two hosts: man (definitive host) and mosquito (intermediate host). Mosquitoes of the genera Aedes, Anopheles, Culex, and Mansonia ingest microfilariae when they bite humans.[11] The ingested microfilaria travel through the stomach wall into the flight muscles, where they mature into infective larval stages. These infectious form eventually migrate to the proboscis from where they get injected into the human skin during the bite. They then travel through the dermis into the regional lymphatics and further mature into male and female larval forms. Female larvae are responsible for releasing microfilariae into the bloodstream. Microfilariae exhibit circadian periodicity in the peripheral circulation reaching their highest concentration in the blood at night.[6]

Clinical progression of the disease varies in individuals depending on the host’s immune response. Chronicity of the infection has been attributed to the suppression of Th1 and Th2 immune responses. The asymptomatic carrier state has links to the synergistic interplay between poly-specific natural IgG4 and anti-filarial IgG4 in blocking the pathogenesis.[12][13][14] Genetic predisposition to lymphedema and prenatal exposure in endemic areas also play a vital role.

Histopathologic diagnosis is by identifying microfilariae on a peripheral thick smear. Adult forms or eggs may also be seen aiding in the diagnosis. Microscopic examination of an affected tissue usually shows multiple adult filarial worms or microfilaria surrounded by dense eosinophilic infiltration and giant cells. Giemsa staining helps in recognizing microfilarial morphology. The absence or presence of a sheath and the pattern of nuclei in their tail are the key features used to differentiate among various species. Features pathognomonic of Wuchereria bancrofti are i) presence of sheath ii) absence of nuclei in the tail. Other distinctive features include cephalic space length: breadth ratio of 1 to 1, and spherical nuclei which are regularly placed and appear in a regular row, well separated without any overlapping.[15]

Individuals can broadly classify into the following clinical categories:

Clinical manifestations can subdivide into acute and chronic:

Other manifestations include chyluria, hematuria, inguinal and axillary lymphadenopathy, testicular or inguinal pain, and skin exfoliation.

A detailed inquiry focusing on travel history and establishing the endemicity and chronicity of condition is critical to making a diagnosis. A complete blood count usually shows eosinophilia. Despite recent advances, a nocturnal peripheral thick smear followed by Giemsa staining demonstrating microfilariae in the bloodstream remains the mainstay of diagnosis. Newer methods include circulating filarial antigen test, which has approximately 97% sensitivity and 100% specificity.[16] It is gradually replacing the older nocturnal thick smear test due to its dipstick nature and ability to diagnose the condition in microfilariae-negative patients.[17] Other techniques include membrane filtration method, ultrasonography (filarial dance sign), lymphoscintigraphy, immunochromatographic tests and molecular techniques like in situ hybridization (ISH), fluorescence in situ hybridization (FISH), and polymerase chain reaction (PCR).

Diethylcarbamazine (DEC) remains the mainstay of treatment worldwide. Centers for Disease Control and Prevention (CDC) recommends a 1-day or 12-day course of DEC (6 mg/kg/day). Those belonging to onchocerciasis or loiasis co-endemic areas must not be prescribed DEC as it can result in a fatal adverse reaction. Filaricidal action of DEC induces an immunological reaction similar to the Mazzotti reaction seen in onchocerciasis, characterized by headache, joint pain, dizziness, anorexia, malaise, and urticaria. Doxycycline and ivermectin or albendazole is the recommended combination in these individuals. Individuals with chronic disease such as elephantiasis or hydrocele will not benefit from pharmacologic therapy. Surgical treatment may be necessary for those with hydrocele. Patients with lymphedema should be managed by a lymphedema therapist emphasizing the role of basic principles of care such as hygiene, elevation, exercises, skin, and wound care, and wearing appropriate shoes. Steroids, although not widely used, can help in reducing the extent of lymphedema seen in these patients. There is limited evidence for the role of doxycycline as some studies advocate the use of doxycycline (200mg/day for 4 to 6 weeks) in adult worm killing and preventing the progression of lymphedema. Suramin is widely used in onchocerciasis, yet its role remains uncertain in lymphatic filariasis.

Bancroftian filariasis is only one cause of lymphatic filariasis. Other conditions involving the lymphatic system can also mimic the disease. It is important to consider age, travel history, family history, endemicity, and socioeconomic status when trying to work out a diagnosis.

The response to diethylcarbamazine is excellent for acute forms of the disease. However, those having chronic lymphatic damage in the form of lymphedema or elephantiasis will respond poorly. These chronic forms have a poor prognosis. Patients with hydrocele might respond to surgery, but recurrence is common. The condition is debilitating rendering the person incapable of performing daily activities.

The grimmest complication of the disease is elephantiasis seen in individuals with long-standing filarial infection. Other complications include hydrocele and adverse reactions from DEC therapy such as encephalopathy and even death when used in loiasis-endemic areas.

Patients with a high index of suspicion for bancroftian filariasis require immediate consultation from infectious diseases expert. General surgery/urology consultation is helpful when dealing with hydrocele. If the patient is in the United States, one should contact the CDC.

Avoiding mosquito bites and enforcing vector control measures is crucial to avoid contracting the disease. Tourist should avoid visiting endemic areas. Visitors touring endemic areas should sleep under mosquito nets, wear long sleeves and trousers, and use mosquito repellent on exposed parts of the body. There is currently no vaccine available. Individuals with lymphedema should maintain good personal hygiene and wash affected areas with antiseptic solution daily. Compression stockings, regular exercise, and using a pillow beneath the affected limb at night can help in reducing the swelling. Restricting a fatty diet is extremely important in patients with overt chyluria. Moreover, a high protein diet and foods rich in high medium-chain triglycerides content are recommended patients having chyluria.

Bancroftian filariasis is one of the neglected tropical diseases and is unlikely to be seen in the US. However, clinicians must have a high index of suspicion whenever dealing with immigrants or travelers from endemic areas presenting with limb swelling, hydrocele, lymphadenopathy, or chyluria. Travelers to the tropic should receive education regarding mosquito bite prevention. Since it is a mosquito-borne disease, prevention involves taking vector control measures such as mosquito nets, applying mosquito repellents, wearing trousers and long-sleeved clothes, and reduction of peri-domiciliary water puddles. The two major public health strategies being employed to eliminate the disease include a) mass drug administration (MDA) to reduce the microfilarial density to suboptimal levels for vector transmission b) ensuring the provision of recommended basic package of care in endemic areas to alleviate the suffering caused by the disease.[7][8][9][18]

Upon starting treatment in non-surgical cases, the pharmacist (potentially with a specialty in infectious disease) should educate the patient on compliance with treatment and the need for follow up, as well as verifying dosing and checking for drug interactions. Often most symptoms take months to subside, but disability is rare if the patient completes the treatment course. The lymphedema may decrease but may not completely resolve, and hence the patient must be told to wear compression garments for life. Nursing can provide ongoing education and monitoring, verify treatment compliance, and alert the treating clinician of any issues. For surgical cases, the nursing staff will be involved pre, during, and postoperatively, providing preparation assistance, and postoperative care, and keeping the surgeon informed following the procedure. Even in light of the rarity of this disease, an interprofessional team approach to care is necessary to achieve optimal results for the patient. [Level V] 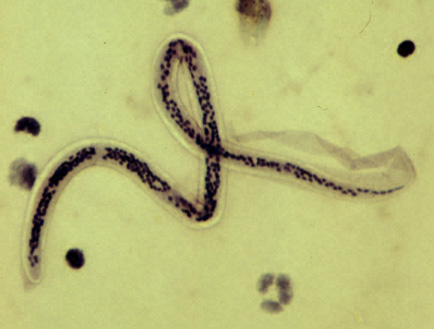 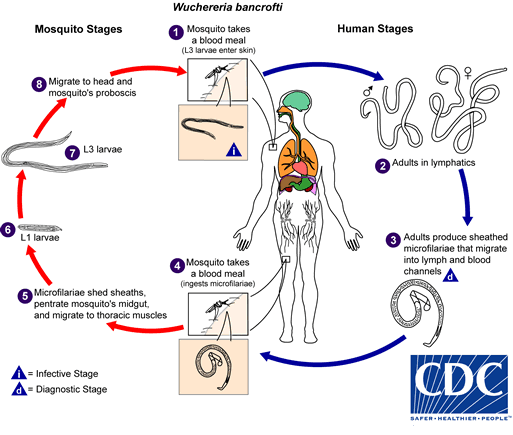 Paily KP,Hoti SL,Das PK, A review of the complexity of biology of lymphatic filarial parasites. Journal of parasitic diseases : official organ of the Indian Society for Parasitology. 2009 Dec;     [PubMed PMID: 23129882]