A Baker's cyst is a fluid-filled sac that forms in the popliteal fossa, which is located on the posterior aspect of the knee. In adults, Baker's cysts are commonly associated with degenerative conditions of the knee, and patients may present with tightness, discomfort, or pain behind the knee. This activity reviews the presentation, complications, and management of Baker's cysts and stresses the role of the interprofessional team in the care of patients with Baker's cysts.

A Baker Cyst, also known as a popliteal or parameniscal cyst, is a fluid-filled sac that forms in the posterior aspect of the knee, typically located between the semimembranosus and medial head of the gastrocnemius. [1][2][3]

In adults, Baker's Cysts tend to form in association with degenerative conditions of the knee.  One of the most common associations seen is secondary to degenerative meniscal tears.  Inflammatory conditions and arthritides are also known causes of popliteal cyst formation.  When the cyst forms in association with a meniscal tear, the meniscus serves as a one-way valve and the extruded synovial fluid localizes and consolidates to form a viscous, gel-like material.

Baker's cysts are encountered most frequently in adults with a history of trauma (e.g., cartilage or meniscus tears, injury to the knee), in association with degenerative/co-existing knee joint disease (e.g., osteoarthritis, rheumatoid arthritis, infectious arthritis, pigmented villonodular synovitis, meniscal tears), or asymptomatically as an incidental finding.[4]

Baker's cysts form and can expand as a result of the accumulation and extrusion of synovial fluid that localizes between the semimembranosus and medial head of the gastrocnemius.  In some instances, normal anatomic variants entail physiologic capsular openings or defects in the posterior knee joint capsule that is essentially contiguous with the gastrocnemius-semimembranosus bursa.  Popliteal cysts are located on the medial side of the popliteal fossa just below the crease found at the posterior knee.

Baker's cysts tend to occur most commonly in adults aged 35 to 70 and most often are associated with inflammatory joint diseases such as rheumatoid arthritis, osteoarthritis, or as a result of overuse or injury to the knee. As they are asymptomatic, Baker's cysts are most often detected incidentally on physical examination or imaging studies (e.g., MRI in an adult with suspected osteoarthritis or internal abnormalities of the knee). Prevalence typically increases with age, most likely due to the increase in knee-bursal communication with age.[5]

In children, Baker's Cysts tend to occur most frequently in those aged 4 to 7 years.

The formation and maintenance of Baker's cysts can occur through several mechanisms, including

The presence of a Baker’s Cyst may be associated with a sensation of tightness, discomfort, or pain behind the knee. Swelling may be more evident when the patient is standing with full extension at the knee.  Swelling tends to be reduced or disappear as the knee is flexed to 45 degrees (Foucher's sign occurs due to the relief of tension on the cyst).  Pain often worsens with increased activity and may inhibit full flexion or extension at the knee.

As a Baker's Cyst enlarges, it may compress surrounding vessels, resulting in lower extremity edema as a result of venous obstruction. If the cyst begins to enlarge into the calf muscle (i.e., dissecting cyst), this too can result in swelling, erythema, distal edema, and a positive Homan's sign - similar to what one might expect to see in a patient presenting with thrombophlebitis or a deep vein thrombosis (DVT).

A Baker’s Cyst may rupture if, due to rapid accumulation of fluid, pressure within the sac becomes too high. When the fluid is released into the surrounding tissues, it may result in inflammation that may then elicit symptoms similar to those that would be experienced with thrombophlebitis in the calf. Symptoms may include sharp pain in the knee and calf, swelling or erythema of the calf, and a sensation that feels like water running down the calf. In addition, thrombophlebitis rarely can result as a complication of a bulging or ruptured Baker’s Cyst.

Cyst rupture also may lead to additional complications and associated symptoms. These can include (1) entrapment of the posterior tibial nerve (eg., posterior plantar numbness and calf pain), (2) occlusion of the popliteal artery (e.g., lower extremity edema), and (3) anterior (e.g. foot drop and edema of the anterolateral leg) or posterior (e.g. plantar dysesthesia, weakness of toes, swelling of the calf, and pain worse with passive toe extension) compartment syndrome.

A Baker's Cyst typically is diagnosed by having the patient stand and extend the knee full; this is when the mass should be most prominent. When the knee is flexed to 45 degrees, the mass often either softens or fully disappears (e.g., Foucher's sign) due to the relief of tension within the cyst. The patient also should be examined in a supine position, where the knee is passively moved from full extension to at least 90 degrees flexion, to ensure adequate examination of the knee joint.

If a Baker's Cyst is located more laterally or no changes are elicited in the cyst when the knee is examined in a full range of motion, it may be difficult to conclude a diagnosis of Baker's Cyst through physical examination alone, especially in a setting of no prior history of knee pathology.[6][7][8]

If this is the case, and a diagnosis of Baker's Cyst remains uncertain, imaging should be performed. This includes plain radiography and ultrasonography, followed by MRI, especially if considering surgery.

Treatment is not usually necessary for a Baker's Cyst unless the patient is symptomatic.[8][9][10]  Incidental findings in the asymptomatic patient are managed with observation and reassurance alone.

It is important to treat the underlying joint disorder, if one exists, in all patients with symptomatic Baker's cysts. This will help reduce the accumulation of synovial fluid and enlargement of the cyst.

It is important to rule out other possible disorders that may mimic many of the key clinical features of a Baker's cyst. These include deep vein thrombosis (DVT), cystic masses (e.g., synovial or ganglion cysts), solid masses, (e.g. sarcomas and lymphoma), and popliteal artery aneurysms. Given the potential complication of pseudothrombophlebitis (e.g., swelling, warmth, tenderness, and a positive Homan's sign) caused by a Baker's cyst when markedly enlarged, dissected, or ruptured), it is especially important to distinguish this finding from a true DVT that may present with similar symptoms.

Baker cyst is often seen by the primary care provider, internist and nurse practitioner. It is important to get an ultrasound to ensure that there is no other pathology. If the patient is symptomatic, he or she should be referred to an orthopedic surgeon. The majority of patients require no treatment. Various treatments do exist for symptomatic patients but with all of them, recurrence is a possibility. The outcomes are good in most patients as the disorder is benign.[11][12] (Level V) 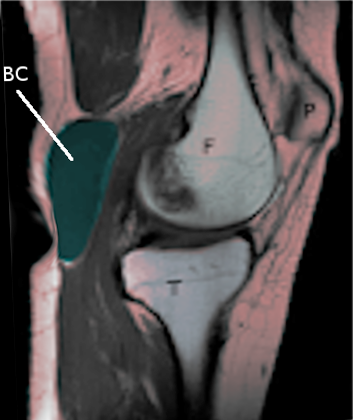