The axillary approach to the brachial plexus nerve block was first described by Dr. Halstead et al. in 1884. Before the prevalence of ultrasound, this approach was useful for patients undergoing outpatient hand surgery due to the superficial location and low risk of complications such as pneumothorax. Its superficial location allows for easier identification of the individual nerve branches with a nerve stimulator or ultrasound techniques. Of note, contrary to its name, this block does not block the axillary nerve and should not be confused with the relatively newer axillary nerve block. This activity reviews the indications and methodology for performing an axillary block and highlights the role of the interprofessional team in the management of patients requiring regional anesthesia.

The superior, middle, and inferior trunks each separate into dorsal and ventral divisions posterior to the subclavian artery. These six divisions will soon regroup distally into three cords around the axillary artery, which is a continuation of the subclavian artery beyond the lateral border of the first rib until the teres major muscle. The dorsal divisions of the middle and superior trunks create the lateral cord, while the dorsal division of the lower trunk continues as the medial cord. The ventral divisions of superior, middle, and inferior trunks join to form the posterior cord. The cords derive their names based on their positional relationship to the axillary artery.

Surface Anatomy for the Axillary Approach

The axilla is a pyramid-shaped space inferior to the glenohumeral joint and superior to the axillary fascia with the base of the pyramid on the surface. The apex of the axilla is the cervico-medullary canal bounded by the clavicle, first rib, and upper part of the scapula. The pectoralis major and minor muscles, and pectoral and clavipectoral fascia form the anterior wall. The scapular and subscapularis muscle in the upper part and latissimus dorsi and teres major muscles in the inferior part make up the posterior wall. The first four ribs and associated intercostal and serratus anterior muscles comprise the medial wall. The humeral head and neck comprise the lateral wall of the axilla.

Pertinent surface anatomy landmark for nerve stimulator-based techniques is the pulse of the axillary artery just distal to the pectoralis major near the anterior axillary wall. Superior to this point, one can identify the coracobrachialis muscle for the associated musculocutaneous nerve block.[5]

Sonoanatomy for the Axillary Approach

Assuming the operator is cephalad to the patient’s arm, they will then palpate the insertion point of the pectoralis major muscle in the anterior axilla. Just distal to this muscle, the ultrasound transducer is placed in the longitudinal plane to visualize the cross-section of the axillary vessels and nerves in the arm.

The axillary vein is visualized medial to the artery. Care must be taken not to avoid compressing the axillary vein causing it to be obliterated from view. Inability to visualize the vein while performing the nerve block may cause inadvertent vascular puncture or intravascular local anesthetic injection.

At the author’s institution, an in-line technique is preferable, with the needle inserted in a superior to inferior direction. Before insertion of the block needle, a skin wheal of lidocaine 1% is created for patient comfort. The radial, median, and ulnar nerves are targeted around the axillary artery at a relatively superficial depth of usually 1 or 2 centimeters. Recall that this compartment subdivides via fibrous septa, and proximity of the needle to the targeted nerves is essential for the nerve block to work.

Throughout the procedure, the operator should use safe practices, including divided administration of local anesthetic and aspiration prior to injection to confirm negative heme to avoid intravascular administration and avoiding injection against high injection pressure or if a patient reports paresthesia. It is highly recommended to withdraw the needle until the paresthesia subsides and then redirect.[10][6] 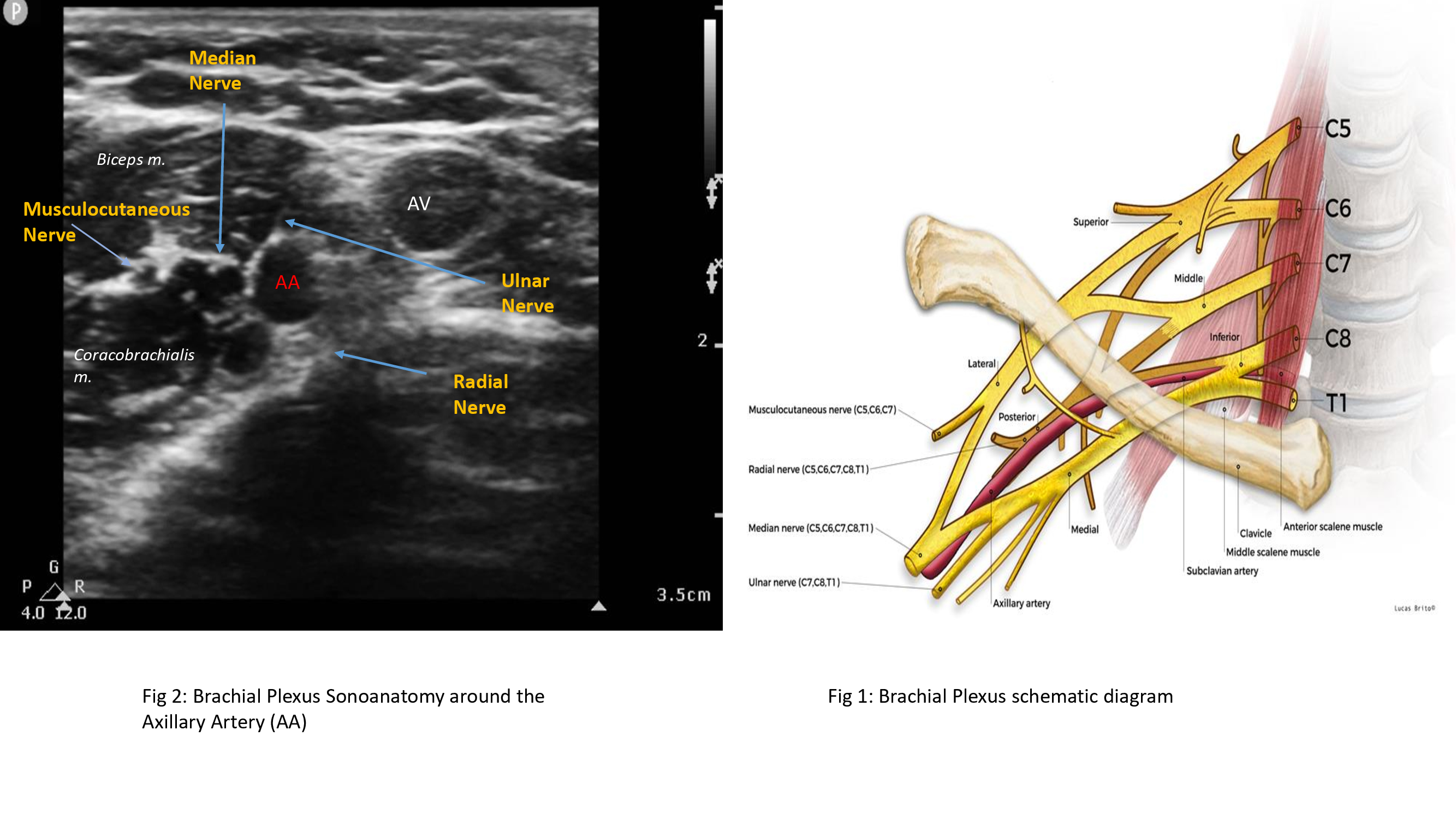 BOSOMWORTH PP,EGBERT LD,HAMELBERG W, Block of the brachial plexus in the axilla: its value and complications. Annals of surgery. 1961 Dec     [PubMed PMID: 13871605]