Aspergillus is a ubiquitous saprophyte in nature found in air, soil and organic matter. Humans normally inhale the spore form of the fungi. However, the disease is usually seen in immunocompromised patients. The immune system plays an important role not only in recognizing inhaled mold and controlling growth but also in regulating the body's allergic and inflammatory response to the infection. This activity describes the evaluation, diagnosis, and management of aspergillus and highlights the role of team-based interprofessional care for affected patients.

Aspergillus is a ubiquitous saprophyte in nature found in air, soil and organic matter. Humans normally inhale the spore form of the fungi. However, the disease is usually seen in immunocompromised patients. The immune system plays an important role not only in recognizing inhaled mold and controlling growth but also in regulating the body's allergic and inflammatory response to the infection.[1][2][3]

The most common species responsible for infections are A. fumigatus, Aspergillus flavus, and Aspergillus terreus.

A. fumigatus is a fungus from the family of Trichocomaceae. First described by Fresenius in 1863, it is known to have a stable haploid genome of 29.4 million base pairs.

The life cycle outside of the human host is characterized by asexual reproduction which proceeds conidiophores, structures where the infectious form known as conidia, are produced and released into the air. Conidia are responsible for fungal dispersion and preserving the fungi genome under adverse conditions.

On average, there are as many as a few hundred conidia inhaled by humans daily.[4][5][6]

Species prevalence has changed over the past decade. A. fumigatus used to be the culprit of 90% of infections. In recent studies, it has been shown that A. fumigatus species complex is responsible for approximately 60% of infections followed in frequency by A. flavus, Aspergillus niger, and A. terreus respectively.

Other forms of aspergillosis such as allergic bronchopulmonary aspergillosis (ABPA), allergic sinusitis, and saprophytic infection are important causes of morbidity but are seldom life-threatening.

Infections caused by Aspergillus are commonly located in the lower respiratory tract, lungs, sinuses, and skin. The central nervous system (CNS) and cardiovascular system may be affected by direct or hematogenous spread.

Human-host defense against the inhaled spores begins with the mucous layer and the ciliary action (compromised in diseases such as cystic fibrosis, asthma, Kartagener) located in the respiratory tract. Macrophages normally react upon recognizing fungi key cell wall components such as beta-D-glucan, secreting inflammatory mediators that ultimately attract neutrophils to initiate cellular immunity.

Many species of Aspergillus are known to produce toxic metabolites (aflatoxins, mycotoxins 3-nitropropionic acid, and ochratoxin A) which inhibit the action of macrophage and neutrophil phagocytosis.

Underlying immunosuppression is directly proportional to neutrophil dysfunction and reduced number of neutrophils. Patients on chronic steroid treatment also have associated macrophage and neutrophil function. In these cases, the risk of disease along with the type of disease is secondary to impaired phagocytosis, suppressed T cell function and oxidative cascade.

Aspergillosis is defined as infection with histopathological confirmation and a positive result of the specimen from a normally sterile site.

Biopsies carry the risk of bleeding, the reason for which noninvasive testing is usually done as the initial step. These include serum biomarkers and sputum analysis.

If a biopsy is warranted, it is usually guided by imaging such as bronchoscopy, video-assisted thoracoscopy surgery, or CT.

Allergic bronchopulmonary aspergillosis, most commonly found in patients with underlying asthma/cystic fibrosis, presents as asthma (shortness of breath with associated wheezing) with recurrent exacerbations which could in some cases be complicated by systemic symptoms such as fever, malaise, bronchial obstruction, or brown mucous plugs. This can be associated with allergic fungal rhinosinusitis characterized by common symptoms of sinusitis but associated with dark-colored nasal discharge.

Of note, subacute invasive aspergillosis is present in patients with evidence of immunosuppression, however, whereas invasive presentations have a short progression of 4 weeks, subacute presentation progresses over the course of 1 to 3 months.

Invasive aspergillosis is commonly seen in states of severe immunosuppression such as organ transplanted patients, AIDS, prolonged neutropenia, advanced cancer, prolonged use of steroids. It most frequently presents as a pulmonary infection after airway inoculation of conidia, however gastrointestinal and skin forms are also seen. Suspicion for pulmonary aspergillosis in the setting of the comorbidities mentioned above should arise if any of the following present: fever, shortness of breath, hemoptysis, cough, pleuritic chest pain. Tracheobronchitis is commonly seen in organ transplant patients. Rhinocerebral aspergillosis is seen in the setting of hematological malignancies in neutropenic patients. Disseminated infection correlates with poor prognosis, and it can be seen affecting organs such as the brain, (brain abscesses and infarction), eye (endophthalmitis), skin (cutaneous aspergillosis), liver, heart (endocarditis), and kidneys.

Evaluation of suspected aspergillosis infection varies depending on the patient's presentation and immune state.[7][8]

Initial management should include laboratory studies such as:

Aspergillomas are radiologically characterized by a rounded mass (fungal ball) in a pulmonary cavity associated with a positive culture or positive IgG. Nodules can also be a form of radiological presentation after lung cancer is excluded with biopsy. Chronic cavitary/fibrosing forms present as 1 large or more than 2 cavities without a fungal ball associated with the previously mentioned chronic symptoms and positive cultures/IgG.

Treatment of acute bronchopulmonary aspergillosis consists of a glucocorticoid regimen plus itraconazole. Voriconazole is another alternative in cases where itraconazole is not well tolerated. Systemic glucocorticoids are the mainstay of treatment followed by a slow oral taper over the course of 3 months. The initial dose of prednisone is usually 0.5 mg/kg.[9][10][11]

Monitoring consists of measuring serum total IgE every 1 to 2 months.

In poorly controlled patients, asthma studies have shown that omalizumab a humanized monoclonal antibody against IgE have suggested benefits in patients without cystic fibrosis.

Chronic pulmonary aspergillosis treatment varies with the manifestations of the disease in the wide range previously described and patient's pulmonary status:

The following should be considered as the differential diagnosis in the wide presentation of Aspergillus-related infections:

Prognosis depends on the initial presentation of the infection, with allergic bronchogenic aspergillosis being the milder end of the spectrum and invasive aspergillosis being the severe end of the spectrum. Treatment course and response largely depends on the site of infection as well as the patient's immune state. Longer treatment periods might be required for immunocompromised patients who have a slower response to treatment.

Prevention of advanced disease starts with reducing mold-exposure and antifungal prophylaxis targeted to high-risk patients with options such as mold-active azoles, echinocandins, and amphotericin B formulations.

Studies have shown that in patients with myelodysplastic syndrome, acute myelogenous leukemia, and severe graft-versus-host disease, posaconazole was an effective prophylactic agent. It is important to state that mold-active azoles have significantly drug-drug interaction rate given their metabolism through CP-450 and that this is taken into consideration when choosing the appropriate drug therapy.

Further investigation is needed to determine the best treatment in cases of prophylaxis failure in patients with invasive aspergillosis, diagnostic tests with higher sensitivity and specificity and detection of polymorphisms in host genes that mediate innate immunity and may play a role in invasive infection in periods of immunosuppression. 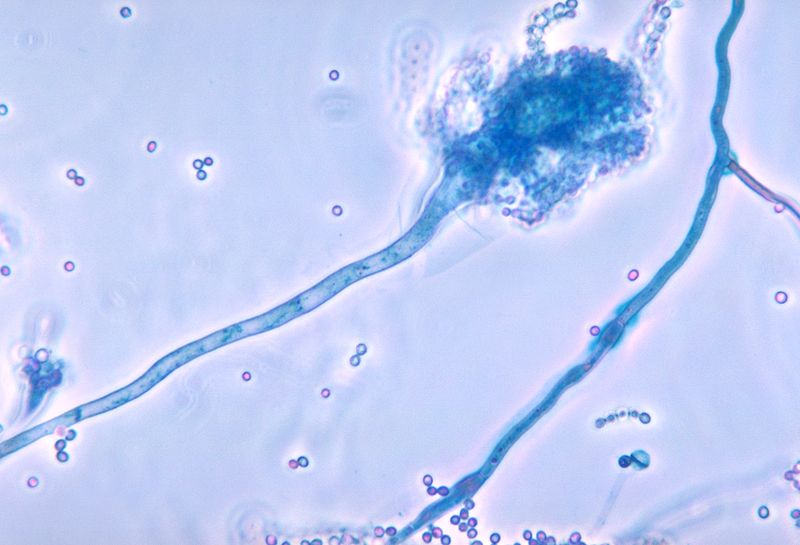