Argyria is a dermatologic condition that is acquired by exposure to or ingestion of silver, and it presents with the insidious onset of gray or blue mucocutaneous discoloration. While it is considered a benign condition, the diagnosis is difficult, and it is often mistaken for other more common dermatologic conditions. This activity describes the evaluation and explains the role of the interprofessional team in the care of patients with this condition.

Argyria is an acquired condition caused by the exposure to or ingestion of silver, and it presents with the insidious onset of gray or blue mucocutaneous discoloration. The word argyria is derived from the ancient Greek word for silver, argyros. Argyria can cause localized or generalized skin pigmentation, depending on the form of silver exposure. Silver, in its elemental form, is a precious, white transition metal. It exhibits the highest electrical conductivity, thermal conductivity, and reflectivity of all the metals, giving it a wide array of uses.[1]

Silver has a diverse role in society, from jewelry to filtration devices. Silver coins can be found in various economies as a financial currency. Interestingly, the phrase "born with a silver spoon in his mouth" refers to health instead of wealth. Silver spoons, as well as silver pacifiers, were once believed to prevent childhood illnesses.[1] The medicinal and health benefits of silver still resonate in the current society because of the oligodynamic effect. The antimicrobial property of silver is related to the released Ag ions and their ability to interact and irreversibly damage bacterial membranes.[1][2]

The most common causes of argyria are secondary to exposures in the workplace or medicinal use. Jewelers, silver miners, silversmiths, and photograph developers are frequently exposed to compounds containing silver.[3] Occupational argyria, often transdermal, transmucosal, or inhaled, tends to be more localized to a specific area of the body; for instance, the fingers of a jewelry polisher. Of note, there have been reported cases of ocular argyrosis in silversmiths due to the deposition of silver in the cornea.[1]

Medicinal exposure has become much less common in the modern-day era since the antimicrobial properties of silver are unavailing when compared to today's antibiotics. As a result, there are minimal FDA-approved medicinal uses for products containing silver in the United States.[4] In modern medicine, silver is utilized in medical-grade forms, including silver sulfadiazine and silver nitrate.[2] Medical uses that that are approved by the FDA are listed below[5][6]:

Despite the dwindling medicinal uses, there is still a market for colloidal silver as a cure-all in alternative and homeopathic medicine.[5] It is advertised as an immune system promoter, and it is readily available online and over-the-counter in pharmacies and grocery stores. Also, the hygiene capacities of silver have resulted in the addition of silver to toothpaste, contact lenses, bandaids, hair dye, and breast pump assemblies.[2]

Argyria is much less common in the 21st century because of the decline in heavy exposure to silver and its use in medicine; however, it does still exist. Generalized argyria cases in modern society are typically seen in individuals who consume colloidal silver as a form of alternative medicine.[4] Argyria affects individuals of all races, genders, and age groups without any specific predilection.

The body tends to store a small amount of natural silver, so the cumulative content of silver increases with age in the body. The accumulated composition is comprised of the binding protein and is present in tissues. With an increased amount of silver, the photoactivation and metal reduction produce a bluish-gray discoloration of the skin in light-exposure areas.[7]

There are three subtypes of argyria[8]:

1. Generalized argyria: This is due to systemic exposure to silver followed by its uptake by the dermis, leading to a gray/blue saltish or metallic diffuse hue to the skin. This color difference becomes evident predominantly in sun-exposed areas.

Azure lunula is a subtype in which there will be a bluish discoloration of the lunula of the fingernails.

2. Localized argyria: This is due to local silver deposition through skin incisions or percutaneous absorption via sweat gland pores. The resultant macular spots or clusters of spots tend to be darker, sometimes almost black.

Amalgam tattoo is the most common subtype of localized argyria and is due to the impregnation of silver-contained dental amalgam into oral mucosa that may occur during restorative dentistry procedures. It is characterized by a flat, dark-blue mucosal lesion near a restored tooth.

3. Argyrosis: This is due to the deposition of silver in the eye. The lesions have a predilection for the corneal Descemet membrane and appear small, darker lesions with greenish and brownish tones.

Histological examination of a skin biopsy in patients suspected to have argyria will reveal numerous, tiny, brown, or black granules, which are deposited in a linear distribution along the basement membrane of eccrine glands.[4][7] There are also granule deposits in the elastic and collagen fibers within the papillary dermis. Deposits of silver can be confirmed using hematoxylin and eosin staining under microscopy.[1]

The epidermis is spared, which is a characteristic that may be used to help distinguish argyria from other pigmentation disorders.[9][10][11] Histologically, argyria can be mistaken for melanoma. Despite that, it is not a precancerous nor a cancerous condition.[12]

The history should include some type of silver exposure. Physical examination of the patient reveals a blue or gray discoloration of the skin, which may be generalized or evident only in a localized area of the body.[13] An individual's sclera, mucosa, and nails can also be affected. Sun-exposed areas are typically darker, and this is thought to be a direct result of sunlight acting as a catalyst to the reduction of elemental silver, thereby resulting in a darker pigmented discoloration.[4]

Argyria is considered a diagnosis of exclusion, and most cases are diagnosed after a thorough history and physical exam. The gold standard for diagnosis is a skin biopsy of the affected region of the body.[4] As discussed in the histopathology section, a biopsy of an affected area of skin will show brown or black granules deposited along the basement membrane, surrounding eccrine glands and hair follicles.[1][7] Energy-Dispersive X-ray Spectroscopy (EDXS) is the non-invasive gold standard technique. Dermatoscopy for localized argyrosis and slit-lamp biomicroscopy for argyrosis are other methods used for the diagnosis.[8]

Argyria is considered a permanent, irreversible skin condition.[4] Many potential treatments have been attempted without success. Among these, chelation has been attempted but was not effective.[14] Dermabrasion and hydroquinone have been trialed without notable results.[7]

Recently, a few studies have documented the temporary improvement of cosmesis after laser treatments. One study highlights the use of Q-switched neodymium-doped yttrium aluminum garnet (Nd:YAG) laser therapy and its utility in the removal of very dark pigmented tattoos. It was thought that this could be utilized in an attempt to reduce the gray and blue pigmentation in patients with argyria. However, the study found that the fluence of this particular laser therapy is too high for argyria, and it induced pinpoint bleeding and marked pain.

However, when a low-fluence 1064-nm Q-switched Nd:YAG laser using a top-hat mode was utilized, there was documentation of successful resolution of discoloration following seven treatments.[15] Unfortunately, this resolution may only be temporary, as there have been documented cases of argyria recurring approximately 1 year after Q-switched Nd:YAG laser therapy was performed.[4][15][16][17]

Argyria is exacerbated by continued silver ingestion or exposure, and this is due to an accumulative effect. It does not improve after discontinuing exposure. Ultimately, the prognosis is permanent skin discoloration of the areas affected.[12] Although not a life-threatening condition, it results in an unfavorable cosmetic outcome.[4]

Argyria is the dermatological manifestation of chronic silver exposure toxicity. However, if a large quantity of silver-containing compounds is acutely ingested, silver toxicity can occur and may be fatal. The dose needed to be fatal is 50 mg or more of intravenous colloidal silver. This would lead to pulmonary edema, hemorrhage, and necrosis of bone marrow, liver, and kidneys.[18]

Although argyria does not have life-threatening complications, cosmetic concerns may induce psychological distress to the patients. Psychological counseling and education about the available treatment modalities would be beneficial. Self-administration of the colloidal silver by the patient from various internet sources should be discouraged.

Argyria is a rare dermatologic skin condition that poses a diagnostic dilemma. Patients often present with the insidious onset of generalized or localized skin discoloration without associated symptoms. Due to the infrequency of this condition, clinicians may not be versed in detecting the disease, potentially leading to a lack of a diagnosis or a misdiagnosis.

While it is imperative for the clinician to obtain a detailed history, including all medications and supplements, as well as to perform a complete physical exam, it is also important to consult with an interprofessional team, including a dermatologist and pathologist. As other conditions must be ruled out with laboratory work prior to diagnosis, nurses are also vital to the interprofessional team, as they will collect blood specimens and assist with the education of the patient and family. 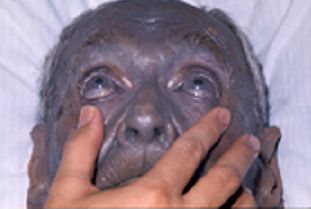 A 92-year-old asymptomatic white man. Generalized argyria: For many years, this man had used nose drops containing silver. His skin biopsy showed silver deposits in the dermis, confirming the diagnosis of argyria. Although its pigmentary changes are permanent, argyria has no known effect on health.
Courtesy of Herbert L. Fred, MD and Hendrik A. van Dijk (CC BY 2.0 https://creativecommons.org/licenses/by/2.0/deed.en) 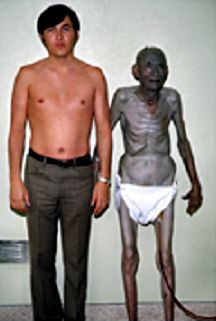 A 92-year-old asymptomatic white man. Generalized argyria: For many years, this man had used nose drops containing silver. His skin biopsy showed silver deposits in the dermis, confirming the diagnosis of argyria. Although its pigmentary changes are permanent, argyria has no known effect on health.
Courtesy of Herbert L. Fred, MD and Hendrik A. van Dijk (CC BY 2.0 https://creativecommons.org/licenses/by/2.0/deed.en)

Mota L,Dinis-Oliveira RJ, Clinical and Forensic Aspects of the Different Subtypes of Argyria. Journal of clinical medicine. 2021 May 13;     [PubMed PMID: 34068024]

Fernandez-Flores A,Nguyen T,Cassarino DS, Mucocutaneous Hyperpigmentation in a Patient With a History of Both Minocycline and Silver Ingestion. The American Journal of dermatopathology. 2017 Dec     [PubMed PMID: 28475520]