Argyll Robertson pupil is found in late-stage syphilis, a disease caused by the spirochete Treponema pallidum. Neurosyphilis occurs due to an invasion of the cerebrospinal fluid (CSF) by the spirochete which likely occurs soon after the initial acquisition of the disease. The exact pathophysiology leading to the AR pupil, however, remains unknown.

The exam finding of Argyll Robertson pupils has been rare in the developed world since the advent of penicillin in the 1940s. However, in the modern era, the number of cases of primary and secondary syphilis have been increasing every year since 2001, and continue to rise. According to the CDC: there were 30,676 cases of late and late latent cases of neurosyphilis reported in the United States in 2016. The CDC acknowledges, however, that the disease is likely under-reported. From 2000 to 2016, the rise in reported syphilis cases is primarily due to increased cases in the men who have sex with men population. This may be due to the fact that syphilis is more common in MSM, many of whom concurrently also have HIV, or it could reflect two separate groups with increased susceptibility. There is a high rate of co-infection with HIV in those MSM patients who have contracted syphilis. The US CDC data estimates that 5% of MSM with syphilis are also infected with HIV. Additionally globally, reports have indicated that syphilis has been on the rise in conjunction with the global HIV/AIDs epidemic. [2]

The exact pathophysiology of AR pupils remains unknown. The current leading theory, proposed by Thompson and Kardon (2006) is that syphilis leads to a "dorsal midbrain lesion that interrupts the pupillary light reflex pathway but spares the more ventral pupillary near the reflex pathway."

Their research implicates a portion of the rostral midbrain (brainstem) located near the Sylvian aqueduct as the most likely location of the syphilitic lesion. Damage to this area would affect the efferent pupillary fibers located on the dorsal aspect of the Edinger-Westphal nucleus (EWN), which are a part of the light reflex while sparing the fibers associated with the accommodation reflex which lay more ventrally to the EWN.[3][4]

The patient with AR pupil will show small, irregular pupils with light-near dissociation: absent light reflex, prompt constriction with near accommodation. Symptoms are usually bilateral and have a gradual onset of months to years. The pupils will initially have a sluggish response to light, progressing eventually to a complete absence of the light reflex. Close examination may show an atrophied iris with loss of the radial folds and crypts. Additionally, pupils will exhibit slow dilation with atropine (or other mydriatics).

Other findings to correlate the diagnosis of AR pupil are those suggestive of late-stage syphilis, such as:

CSF findings indicative of neurosyphilis will show greater than 20 WBC/microL, and return positive for VRDL and intrathecal pallidum antibody index.[6]

There is no treatment for AR pupil, however; the progression can be controlled with the treatment of the underlying disease, syphilis. Treatment is with penicillin G benzathine (124 Mu intramuscularly [IM]). Alternatively, doxycycline (100 mg orally [PO]) can be used for those with a penicillin allergy.[7][8] Ceftriaxone has also been used.[7]

Several other conditions may present similarly to AR pupils, as they also demonstrate a light near dislocation.

Either input or output failures can cause light-near dissociation. Bilateral pre-chiasmal lesions of the optic nerves, chiasmal lesions or bilateral optic tract lesions could cause input failure, leading to a false light-near dissociation: The light reflex will be reduced under these conditions, and the near reaction unaffected. Output failure is the cause of AR pupil, as well as Adie’s pupil, the Miller-Fisher variant of acute idiopathic demyelinating polyradiculopathy, and in the setting of uncontrolled diabetes mellitus and certain peripheral neuropathies. AR pupil can de be differentiated from these other conditions by the pupillary size: Argyll Robertson pupil alone presents with small pupils, the other diagnoses all demonstrate large light-dissociated pupils.[9]

The presence of AR pupils carries a significant implication, neurosyphilis. This is a disease with multi-organ impact and carries high morbidity. Once AR pupils have been diagnosed, patients should begin immediate and potent treatment to eliminate the infection and halt the progression of the disease. The sooner the diagnosis is made and acted upon, the better the prognosis for the patient.

AR pupils are found in the tertiary and final stage of infection with syphilis. These patients are afflicted with neurologic and cardiovascular disease. Such complications include an aortic aneurysm and insufficiency of the aortic valve, meningitis, and tabetic disease. While treatment can arrest the progression of the disease, the resolution of symptoms is dependent on the extent of the underlying disease. For those with cardiac or nerve involvement, the damage is not reversible, and these patients carry the poorest prognosis.[10]

Prevention of the disease is through primary prevention. There is no vaccination for syphilis. Sexual education is recommended to prevent the transmission of syphilis.

Patients with AR pupils, implicating a late-stage syphilis infection can require a team of health-care professionals to aid in their treatment and recovery. An infectious disease specialist should be consulted for the underlying infection or co-infections, and consultation with ophthalmology. Patients may require cardiology and neurology depending on the extent and a breadth of other symptoms. Patients should be educated on safe sex practice to prevent transmission and re-infection. 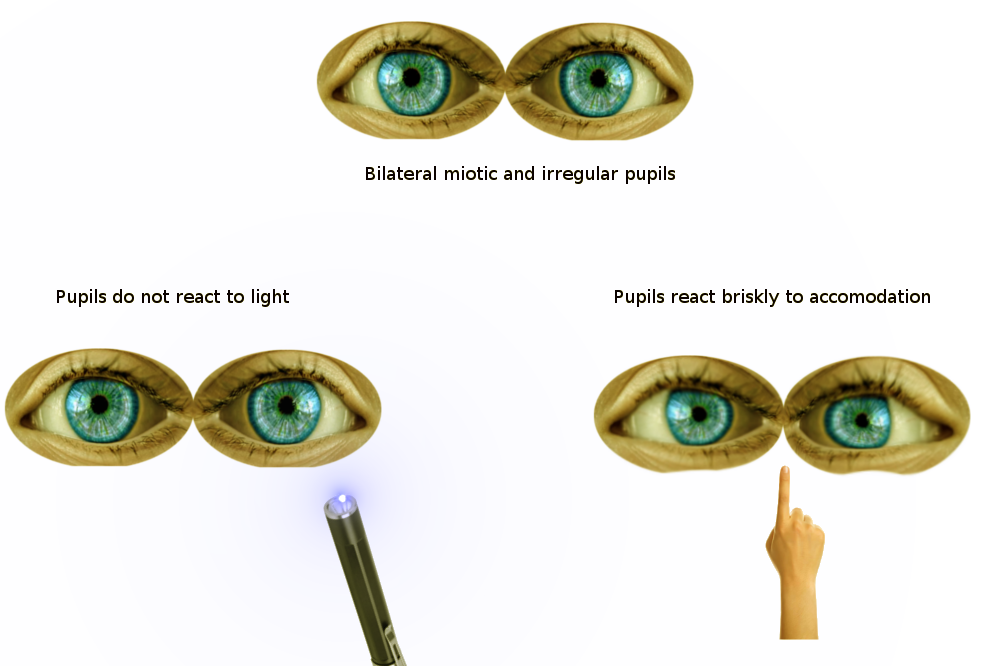