Angiokeratomas are a group of capillary malformations characterized by vascular ectasias of the papillary dermis associated with hyperkeratosis, papillomatosis, and acanthosis of the epidermis. Several distinct clinical presentations of angiokeratomas are known. Angiokeratoma circumscriptum is the rarest form of these disorders.

The mechanism for the development of angiokeratoma circumscriptum is unknown. There has been speculation that altered hemodynamics, chronic trauma, tissue asphyxiation, congenital causes, pregnancy, or chilblains, are thought to play a role in the development of ectatic blood vessels of the papillary dermis, below the basement membrane.[3] Epidermal changes are reactive, increase with age, and follow vascular ectasia. The condition is benign and is not commonly associated with system disease. Although it has rarely correlated with Klippel-Trenauney syndrome and Cobbs syndrome.[5]

Verrucous hemangiomas may look very similar clinically and histologically; however, angiokeratoma circumscriptum is limited to the papillary dermis, and verrucous hemangiomas characteristically involve the deep dermis and subcutaneous tissue. Obtaining a deep biopsy of the lesion is essential to making a correct diagnosis.[6][2]

A patient with angiokeratoma circumscriptum typically presents with involvement on the skin of one lower extremity, most commonly on the buttocks or thigh. Angiokeratoma circumscriptum at birth most commonly manifest as multiple erythematous macules. Over the years, the macules can develop into dark red or violaceous keratotic papules, which coalesce into plaques. These characteristic plaques may vary in size from a few centimeters to covering as much as one-fourth of the body surface area.[2] Patients may report occasional bleeding and pain with minimal trauma.

Several cases of angiokeratoma circumscriptum lesions associated with Klippel-Trenaunay syndrome (KTS) have been reported in the literature worldwide. Usually, KTS involves venous malformations and a port-wine stain on a limb with concomitant soft tissue swelling and bony hypertrophy. The rare reported cases described angiokeratoma circumscriptum instead of the port wine stain malformation.[5]

Other entities that have correlations with angiokeratoma circumscriptum include Cobb syndrome, nevus flammus, cavernous hemangioma, and traumatic arteriovenous fistula.[2]

Angiokeratoma circumscriptum is usually suspected based on clinical presentation and confirmed histopathologically. Histologically the disorder is defined by ectatic thin-walled vascular channels in the papillary dermis with acanthosis and hyperkeratosis of the epidermis. Thrombosis of these vascular channels is common, which is demonstrated by the vessels being packed with erythrocytes histologically. Upon physical examination, a plaque of angiokeratoma circumscriptum may closely resemble melanoma when the vessels become thrombosed due to the darker appearance of the lesion.[3][6] The deeper dermis and subcutaneous tissue should not be affected when making the diagnosis of angiokeratoma circumspriptum. If the deep dermis and hypodermis are involved, the likely diagnosis is a verrucous hemangioma.[2][6]

Ultrasonographic evaluation of angiokeratoma circumscriptum would reveal a linear hypoechoic soft tissue mass, with mild vascularity, without any relationship to the underlying bone.[2]

Further investigation is usually not necessary, but if multiple lesions are present in the lumbosacral area overlying the spine of a newborn or an infant, an MRI of the spine is needed to rule out spinal dysraphism or Cobb syndrome.

Cosmesis and recurrent bleeding are common indications for the intervention of angiokeratoma circumscriptum. Diathermy, curettage and electrocautery, cryosurgery, and surgical excision may be an option for smaller papules or plaques.[1] Larger plaques require laser ablation, as surgical excision may result in significant disfiguration. Several lasers have proven effective at treating angiokeratoma circumscriptum, including argon laser, carbon dioxide laser, Cooper vapor laser, neodymium-doped yttrium-aluminum-garnet (Nd:YAG) laser, pulsed-dye laser, and intense pulsed light source systems.[7] Typically laser treatment is initiated with carbon dioxide or erbium lasers to decrease the hyperkeratotic epidermis, followed by a laser that targets hemoglobin, such as the potassium titanyl phosphate (KTP) or pulsed dye laser. The advantages of the carbon dioxide laser treatment include precision in-depth and surface area, operative speed of the procedure, hemostasis, and minimal post-operative pain and edema.[3][7][8]

Non-ablative laser systems like a pulsed-dye laser, Cooper vapor laser, pulsed argon laser, and Nd:YAG laser typically require several treatment sessions to achieve full eradication of involved areas of skin. These lasers have difficulty accessing the superficial dermis due to the hyperkeratotic epidermis that overlies angiokeratoma circumscriptum lesions. Ablative laser systems, including carbon dioxide and continuous-wave argon lasers, can reach the superficial dermis in one pass.[3] Textural and pigmentary changes are more common with ablative laser systems, but the risk is minimizable with conservative techniques during the treatment, effective patient education, and proper post-operative care.[9]

Angiokeratoma circumscriptum lesions may be eradicated permanently with surgical or laser intervention. Lesion recurrence is rare.[3]

Risks involved with treatment utilizing laser, cryotherapy, electrocautery, or diathermy interventions for angiokeratoma circumscriptum include textural or post-inflammatory pigment changes. Besides, the typical complications associated with surgery, appendicular, or axial disfiguring may occur as a result of the removal of large angiokeratoma circumscriptum plaques depending on the location.

Patients should understand the benign nature of this disease entity and their options for treatment with an emphasis on potential disfigurement that can ensue.

Angiokeratoma circumscriptum is a rare skin disorder that can be difficult to diagnose. If a patient first presents to the primary care physician, pediatrician, or mid-level provider with a lesion suggestive of angiokeratoma circumscriptum, referral to a dermatologist is appropriate for further evaluation and treatment. Dermatology specialty-trained nurses can provide a great deal of assistance during any management strategy; diathermy, curettage and electrocautery, cryosurgery, and surgical excision. They can assist in the procedure, coordinate care between various clinicians, and counsel patients, and answer questions. This type of interprofessional team approach is crucial to achieving optimal patient outcomes. [Level V]

Published articles on this topic are rare. Further research concerning guidelines for the safest and most effective treatment interventions for angiokeratoma circumscriptum is warranted. 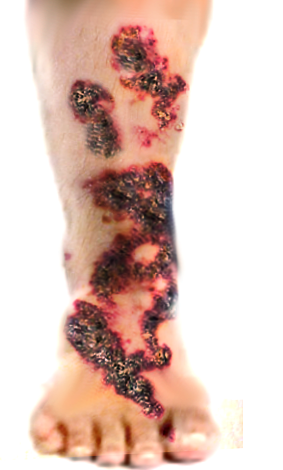