Anemia is the reduction in the level of hemoglobin, red blood cells (RBCs), or hematocrit below their lower normal range. There are different types and causes of anemia. Anemia subdivides into microcytic, macrocytic, and normocytic variants. Myelophthisic anemia categorizes under the normocytic variety of anemia. Normocytic anemia has the mean corpuscular volume (MCV)  within the normal range of 80 to 100 fL. Other types of normocytic anemia apart from myelophthisic anemia include aplastic anemia, anemia of chronic disease, and anemia of renal disease. Microcytic anemia is anemia with MCV below 80 fL, and they include sideroblastic anemia, iron deficiency anemia, and thalassemia. The macrocytic anemias have MCV greater than 100 fL, and they include megaloblastic anemia and non-megaloblastic anemia. Anemia can be asymptomatic or can present with mild to severe symptoms. Severe symptoms can be devastating since it can limit the functional capacity of the individual in carrying out even basic activities of daily living. A recent article by Kassebaum NJ et al. reported that about 27% of the world population is affected by anemia with iron deficiency anemia being the most common subtype implicated.[1] Anemia considerably affects morbidity and mortality, and thereby there is the utmost relevance in making timely diagnosis and undertaking effective treatment of the same.

Myelophthisic anemia is anemia characterized by the presence of immature erythrocytes in the peripheral blood due to the infiltration (crowding out) of the bone marrow by abnormal tissue. It is of a hypo-proliferative variant of anemia because it results from inadequate production of red blood cells from the bone marrow.[2] Hypoproliferative anemia is different from other forms of anemia since the reticulocyte count is usually low compared to anemia caused by increased blood loss or peripheral destruction, wherein the reticulocyte count mostly increases. Other causes of hypo-proliferative anemia include nutritional deficiencies, toxin exposures, endocrine abnormalities, hematologic malignancies, and bone marrow failure syndromes. [2] This article will be focusing on myelophthisic anemia, and its epidemiology, etiology, pathophysiology, complications, evaluations, and management.

Myelophthisic anemia is reported in less than 10% of patients with metastatic cancers such as prostate, breast, and lungs.[4]

In myelophthisic anemia, the peripheral blood smear will show characteristic leukoerythroblastic reactions with the presence of immature myeloid and nucleated erythrocytes, including abnormal erythrocytes such as schistocytes, and dacrocytes (teardrop) and anisopoikilocytosis cells. These are secondary to extramedullary hematopoiesis and the disruption of marrow sinusoids. Since there may be a dry tap during bone marrow tap owing to fibrosis, bone marrow biopsy is essential for the diagnosis along with the visualization of underlying etiologies such as metastatic cancer cells or granulomatous lesions.

Patients with myelophthisic anemia will have a history of underlying malignancy or chronic inflammatory or infectious diseases. Malignancies that have correlations with myelophthisic anemia include prostate, breast, and lung carcinomas. Reports also exist of myelophthisis in a patient with advanced-stage melanoma.[6] Patients will have symptoms of anemia, including fatigue, weakness, shortness of breath, and exercise intolerance. On physical examination, the patient will have conjunctiva pallor, delayed capillary refill, tachycardia, and splenomegaly. Splenomegaly, as well as hepatomegaly, is found in this type of anemia because of the development of extramedullary hematopoiesis due to the failure of the bone marrow to produce matured erythrocytes. These patients also have increased risks for bleeding tendencies (thrombocytopenia) as well as repeated infections (leukopenia).

To recognize and appropriately diagnose myelophthisic anemia, the combinations of relevant laboratory data, peripheral blood smear, and bone marrow biopsy should be studied. Laboratory data include a complete blood count, which will show the level of white blood cells, hemoglobin, hematocrit, platelets, MCV, reticulocytes counts, and Red cell distribution with (RDW). In myelophthisic anemia, pancytopenia could be found due to infiltration by cancers and also fibrosis. MCV is usually normal in this type of cancer, and reticulocyte counts are low. A peripheral blood smear will show abnormal red blood cells ranging from immature to defective shapes and the size of the cells. Red blood cells will be nucleated, and some will be in teardrop forms. Other cells include giant platelets and immature leucocytes. The presence of these immature cells is called leucoerythroblastic.[7] Bone marrow biopsy will show signs of infiltration by primary cancer and fibrosis in cases secondary to granulomatous infections, or autoimmune diseases.[4]

The treatment of myelophthisic anemia is variable because it has as its basis the underlying etiology. For patients with malignancies, treating, and getting rid of the malignant tissue either through chemotherapy or radiation will help to eliminate the infiltrating tissue taking the space of hematopoietic cells. Rosner et al. (2013) reported a case report where an advanced staged melanoma causing myelophthisis responded to immune checkpoint inhibition with the anti-programmed cell death-1 inhibitor or PD-1 inhibitor, called pembrolizumab.[6] They reported a favorable response after using this PD-1 inhibitor. As a result of the reaction of the melanoma to a PD-1 inhibitor, they believe that there is an immunologic compartment within the bone marrow. Other clinicians have also reported that there is an interaction between immune and skeletal systems implicating the pathogenesis behind such an entity.[8]

Because a patient with myelophthisic anemia has low hemoglobin levels, transfusion of packed red blood cells is also indicated. Even though other cell lines are also low, transfusions of platelets or giving leukocytes stimulating medication are also not indicated unless there is severe concurrent bleeding or infections.

For a patient with myelophthisic anemia following primary myelofibrosis, a study demonstrated survival benefits from the use of ruxolitinib, a Janus kinase inhibitor.[9]

The differential diagnosis of myelophthisic anemia includes other causes of hypo-proliferative anemia. Before diagnosing myelophthisic anemia, it is essential to rule out nutritional deficiencies like iron, vitamin B12, and folate deficiencies, anemia of chronic disease and inflammation, anemia of renal disease, hypothyroidism, hyperthyroidism, hyperparathyroidism, hematologic malignancies and other causes of bone marrow failure. Bone marrow failure can be due to various etiologies, including drugs, infection, immune diseases, pregnancy, and some genetic diseases. Drugs that could cause this presentation include cytotoxic drugs such as those used in chemotherapy. Infections such as parvovirus B19 and EBV have also been reported to mimic myelophthisic anemia. Genetic causes that should be ruled out include Fanconi anemia, GATA 2 deficiency, and Schwachman-Diamond syndrome as they also cause pancytopenia. Anemia is multifactorial, and it could be challenging to come up with a diagnosis of myelophthisic. However, the careful evaluation of peripheral smear, bone marrow biopsy, and immunohistochemistry will help in coming up with the diagnosis.[4] Leukoerythroblastosis in the setting of extramedullary erythropoiesis is the crucial element in differentiating this entity from its close counterparts, such as aplastic anemia and pancytopenia.

Complications that could occur in these patients are symptoms of severe anemia due to the low volume of normal RBCs circulating in the peripheral blood, infection due to leukopenia and excessive bleeding due to pancytopenia. Hypersplenism resulting in refractory thrombocytopenia, as well as portal hypertension, can further complicate these patients.

The patient should be aware that there are different causes and types of anemia. The most common cause of anemia is iron-deficiency anemia, which is treatable with iron supplements. Other types of anemia, such as myelophthisic anemia require management by treating the underlying cause. The signs and symptoms of anemia are going to be similar, including fatigue, conjunctiva pallor, tachycardia, and sometimes shortness of breath. Patients should educate themselves and discuss with the primary care physician whenever they develop new symptoms like recurrent bleeding and infections.

Physicians and nurse practitioners need to investigate the cause of anemia in patients with cancer. There have been reports of patients been misdiagnosed owing to their different presenting signs and symptoms.  Khan MH et al. reported a case of a 57-year-old female with stage four lobular breast carcinoma who was initially misdiagnosed as having thrombotic thrombocytopenic purpura.[3] The diagnosis of myelophthisic anemia requires a thorough algorithmic work up. Infections, mostly granulomatous variants, can also lead to myelophthisis. If there is doubt about the cause, patients require referral to a hematologist for definitive workup. The management of these patients is to treat the underlying cause first.

The management of all anemias, including myelophthisic anemia, requires the coordination of an interprofessional healthcare team that includes physicians, specialists, specialty-trained nurses, and oncologic pharmacists. This approach guarantees proper diagnosis and optimal care leading to the best patient outcomes. [Level 5] 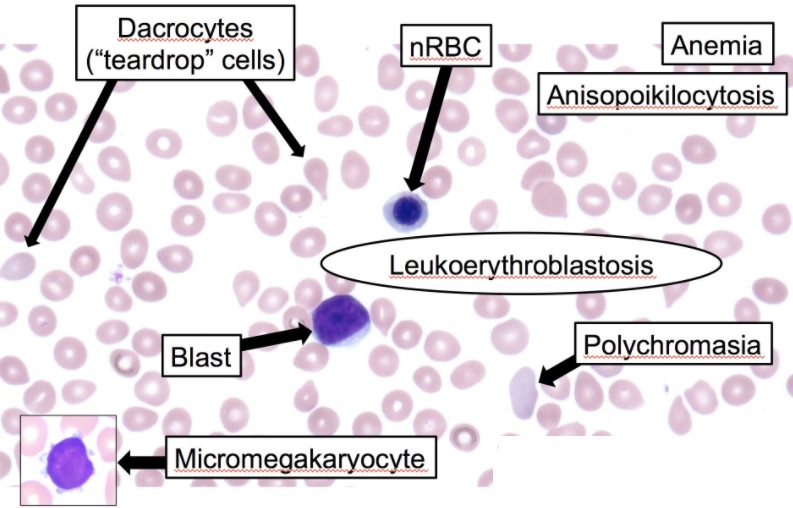 Leukoerythroblastosis reaction in the peripheral smear
Contributed by Suzanna Logan

Rosner S,Sen F,Postow M, Response after treatment with pembrolizumab in a patient with myelophthisis due to melanoma: the role of checkpoint inhibition in the bone. Journal for immunotherapy of cancer. 2017;     [PubMed PMID: 28428883]