Amblyopia (lazy eye) is a disorder of the sight due to the eye and brain not working together resulting in decreased vision in an eye that typically appears normal. It typically occurs early in life with patients having poor stereovision, visual acuity, pattern recognition, and low sensitivity to motion and contrast. This activity reviews the evaluation and management of amblyopia and explains the role of the interprofessional team in improving care for patients with this condition.

Amblyopia occurs early in life when the developing brain visual system fails to have a sharp image transmitted to the retina and from there to the visual brain cortex via the lateral geniculate.  It is usually unilateral the result of media opacities, cataracts, and other conditions or because strabismus or anisometropic refractive errors place one eye at a developmental disadvantage to the other.  It occurs bilaterally with bilateral cataracts or high refractive errors. Our visual experience as infants and children determines how we see as adults.[1][2][3]

In practice, the earlier the onset of its sensitive period the more profound the visual deprivation and the deeper the resultant amblyopia. Conversely the more difficult for it becomes to reverse clinically. This is because different onset times for the visual deprivation result in different anatomic changes in the magnocellular (M) and parvocellular (P) visual pathways. For this reason, surgeons must operate on dense congenital monocular cataracts very early; usually days after discovery. Even a few weeks without surgical clearing can lead to irreversible amblyopia. With binocular, equally dense congenital cataracts there is a little more flexibility, usually a few weeks.[4][5]

In its various forms, amblyopia affects up to 3% of the population. Acuity or sharpness of vision is only one aspect of vision affected.  Reduced contrast sensitivity over certain spatial frequency ranges occurs. Patients describe vision out of the affected eye as being distorted or confused. A practical clinical example of this is the observation that the amblyopic eye achieves a much higher acuity when tested with single isolated letters (or symbols) rather than lines of letters. This is called the crowding phenomenon.[6]

With monocular visual deprivation during visual development, there is competition between the neural networks of the two eyes for impact on cortical neurons. Different aspects of neuronal selectivity such as synaptic plasticity, activity-dependence, and neuronal network learning have different sensitive periods and are therefore affected differently by the types of vision deprivation involved.

It is the anatomic relationships of photoreceptors to ganglion cell receptor fields and their connection to the layers in the lateral geniculate and from there to the layers of the visual cortex that determine amblyopia. Age of onset and duration of the disability determines its depth. The earlier onset and the longer untreated, the harder it is to correct.[7]

Many patients with amblyopia, especially those with a mild form, are not aware they have the condition until they are tested at an older age. People typically have poor stereo vision. Those with amblyopia further may have a diminished pattern recognition, poor visual acuity, and low sensitivity to motion and contrast.

In amblyopia, there are functional abnormalities in spatial vision, including reductions in visual acuity, contrast sensitivity, vernier acuity, spatial distortion, abnormal spatial interactions, and impaired contour detection. Patients with amblyopia will have binocular abnormalities such as impaired stereoscopic acuity and abnormal binocular summation. These deficits are usually specific to only the amblyopic eye. However, subclinical deficits of the normal eye have also been demonstrated.

People with amblyopia have difficulty seeing three-dimensional images hidden in stereoscopic displays such as autostereograms. Perception of depth, however, from monocular cues such as size, perspective, and motion parallax remains normal.

Evaluation is based on subjects reading age-appropriate acuity charts or clinicians determining fixation patterns on the patient's part. Central steady maintained fixation by an eye should imply no amblyopia. Off center, unsteady, or unmaintained fixation would indicate amblyopia.

Amblyopia is diagnosed by identifying diminished visual acuity in one or both eyes that are out of proportion to the structural abnormality of the eye and excluding any other visual disorders as the underlying cause. It can be defined as an interocular difference of two lines or more in acuity when the eye optics is corrected. In young children, visual acuity is difficult to measure but can be estimated by observing the reactions of the child when one eye is covered, including watching the child's ability to follow objects with one eye.

Refractive amblyopia except for high hyperopic anisometropia of long standing is the most amenable to treatment, especially astigmatic amblyopia. A trial of glasses alone may be enough in the easier later onset cases. If not then patching the good eye varying amounts of time per day is indicated.  Visual activity such as reading, playing video games, etc. while patching is thought to be helpful. Chemical patching by blurring the good eye with a cycloplegic drug (usually Atropine) can be effective.

By nine years of age, the plasticity of the brain to develop or to reverse amblyopia is no longer present. Only a rare case with treatment after that age will have some results. Conversely, the onset of factors at that age no longer cause amblyopia.

Patching of the good eye as a treatment for amblyopia began in the 16th century. It remains the mainstay of therapy to this day.[10][11]

Amblyopia has significant morbidity and is a common cause of monocular vision loss. In addition, individuals with this eye disorder are at a high risk of losing sight. The quality of life for individuals with amblyopia is poor.

However, if treated more than 70% of patients have vision success within 12 months but there may be some decline in vision over the coming years.

Risk factors for failure to restore vision include:

Patients who undergo occlusion therapy must be closely monitored to ensure that they do not peek.

Reward system may help children comply with the eye patch.

Patients need to be compliant with treatment and follow up appointments.

Amblyopia is not an uncommon problem in children. While ophthalmologists are the physicians who eventually treat the disorder, the patient is most often first seen by a nurse, primary care provider or pharmacist as part of the interprofessional healthcare team. Without an appropriate referral, the child is at risk for permanent vision loss and poor cosmesis. Nurses may see the child in the pediatric clinic or the parent may have asked the nurse for a consult. Similarly, the pharmacist is always one of the first professionals to encounter amblyopia in the retail store. This is the ideal time to make a strong suggestion for a referral to an ophthalmologist. The longer the condition remains undiagnosed and untreated, the poorer the outcome. All parents need to be educated by the clinicians and specialty ophthalmic nurses regarding the importance of compliance with treatment and follow up.[12]

At least 75% of children treated with occlusion therapy do show a good return of vision. However, in at least 50% of children, there is a slight decreased in visual acuity over time. The best outcomes are in children who are referred early in life. However, in many cases, the actual real-life images may be slightly altered in many children as they grow. [13][14] (Level 5) 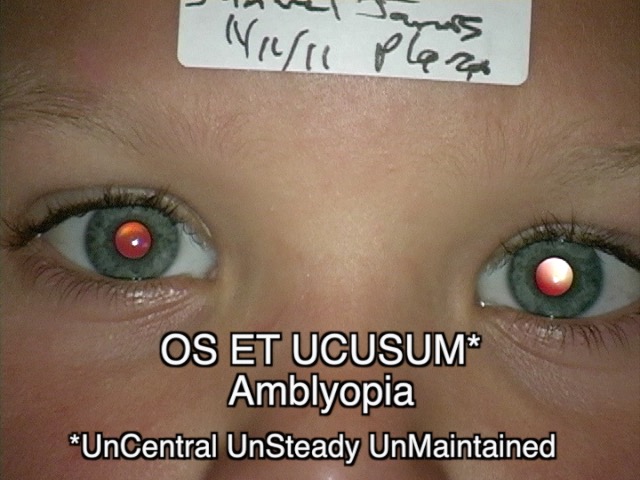