The Allen test is used to assess collateral blood flow to the hands, generally in preparation for a procedure that has the potential to disrupt blood flow in either the radial or the ulnar artery. These procedures include arterial puncture or cannulation and the harvest of the artery alone or as part of a forearm flap. A positive Allen test means that the patient likely does not have an adequate dual blood supply to the hand, which may present a contraindication to the planned procedure, or at least suggest that further evaluation is necessary. This activity reviews the Allen test technique and discusses the interprofessional team's role in applying this maneuver to improve patient outcomes.

The Allen test (AT) is used to assess collateral blood flow within the hands, specifically testing for the presence of a complete palmar arch.[1] Edgar Van Nuys Allen first described the test in 1929.[2] Dr. Allen was a professor of medicine at the Mayo Clinic in Rochester, Minnesota, where he studied peripheral vascular disease. He served as a colonel in the US Army Medical Corps in World War II and led a distinguished career that included the presidency of the American Heart Association and the receipt of the 1960 Lasker Award. In 1952, Irving Wright described a modified version of the Allen test that has since largely supplanted the original method. It is referred to as the modified Allen test (MAT). The MAT examines one hand at a time, in contrast to Allen's version, and can be used to assess either radial or ulnar arterial flow.[3]

Blood supply to the arms is carried by the left and right subclavian arteries, which arise from the arch of the aorta - the left directly and the right via the brachiocephalic, or innominate, artery. The subclavian arteries then run beneath the clavicle and become the axillary arteries as they pass the lateral margins of the first ribs. From there, the axillary arteries become the brachial arteries after passing the teres major muscles; they then supply blood to the upper arm, continuing distally to the antecubital fossa where they divide into the radial and ulnar arteries. The radial and ulnar arteries supply blood flow to the forearm and eventually to the hand. The radial artery runs along the lateral aspect of the forearm between the brachioradialis and flexor carpi radialis muscles. Just distal to the wrist, it splits into superficial and deep palmar branches. The ulnar artery runs along the medial aspect of the forearm and at the wrist runs through Guyon's canal, where it splits into its deep and superficial palmar branches. These arches form the basis of collateral blood flow to the hands.[4] The deep palmar arch is classically described as arising from the radial artery, with or without contributions from the ulnar artery. The superficial arch is predominantly supplied by the ulnar artery.[5] The deep arch of the hand is more commonly anatomically complete; thus, the radial artery is more likely to provide the dominant blood supply, although the ulnar artery is sufficient to perfuse the hand in 97% of cases.[6]

The need for this test arises in cases in which a procedure that may compromise radial artery patency is being considered. A classic example is the harvest of a radial forearm flap wherein the radial artery is included to perfuse the tissue being transferred and is therefore no longer available to perfuse the hand. Likewise, if the radial artery needs to be cannulated or catheterized and there is a risk for thrombosis, the Allen test can help confirm that the hand will maintain adequate blood flow through the ulnar artery and collaterals in the event the radial artery becomes occluded. A positive Allen test means that the patient may not have an adequate dual blood supply to the hand, which would be a contraindication for catheterization, radial forearm flap harvest, or any procedure that may result in occlusion of the vessel.[7][8]

The Allen test may be performed with only a clinician's hands, although in some cases, a Doppler probe placed on the thenar eminence or a pulse oximeter placed on the thumb may be helpful, particularly if a patient exhibits Reynaud's phenomenon with cool and pale hands at baseline. Intraoperatively, an Acland microvascular clamp and a Doppler probe may be used to confirm preoperative Allen test results prior to ligation of the radial artery.

The original Allen test is performed by asking the patient to elevate both arms above the head for thirty seconds in order to exsanguinate the hands. Next, the patient squeezes their hands into tight fists, and the examiner occludes the radial artery simultaneously on both hands. The patient then opens both hands rapidly, and the examiner compares the color of the palms. The initial pallor should be replaced with the hands' normal color as the ulnar arteries restore perfusion. The test is then repeated while occluding the ulnar arteries rather than the radial arteries. The time that it takes for the normal color to return should indicate the degree of collateral blood flow. The test is negative when there is a return of normal color to both hands during occlusion of either artery alone. Persistent pallor in the palm indicates inadequate collateral blood flow to the hand.

The modified Allen test differs from the original Allen test mainly by examining the radial and/or ulnar arteries in one hand and then repeating on the other side, if necessary. Traditionally, it is performed by first having the patient's arm flexed at the elbow with the fist clenched tightly to exsanguinate the hand. The ulnar and radial arteries are then compressed by the examiner's thumbs simultaneously. The elbow is extended to no more than 180 degrees, avoiding overextension as that could lead to a false-positive test. The fist is subsequently unclenched, and the palm should appear white. The compression is then released from the ulnar artery while maintaining pressure over the radial artery (see image and video). Once the compression is released, the color should return to the palm, usually within 10 seconds. The test is repeated on the same hand while releasing the radial artery first and continuing to compress the ulnar artery if evaluation of radial collateral blood flow is required.

In a patient with normal, patent arteries, the color should return to the palms relatively quickly (within 10 seconds unless the patient is cold) after the release of either artery. If pallor persists within the palm after the patient unclenches their fist and one of the arteries is released, then the test is positive and indicative of an occlusion within the artery that is being released. For example, if the radial artery is compressed and palmar pallor persists, it indicates compromised blood flow in the ulnar artery. The same is true if the ulnar artery is compressed and palmar pallor persists; then the compromised blood flow is in the radial artery.

There are additional tools the examiner can use to make this test more accurate. Digital plethysmography, duplex ultrasonography with dynamic testing, and pulse oximetry (often with the sensor placed on the thumb tip) can all be used.[9] Concomitant use of pulse oximetry while performing the Allen test is the easiest of these methods. The technique involves placing a pulse oximeter on the thumb before compression to get a baseline saturation and waveform. The examiner will then compress both radial and ulnar arteries until the waveform disappears and the oxygen saturation falls to zero. The pressure on the ulnar artery is then released. The waveform and the saturation are recorded. If these values are consistent with the baseline, it implies good collateral flow.[9]

While there are no complications likely to occur from the use of this simple physical examination maneuver, the most feared complication that can be avoided by performing an AT or MAT is catastrophic hand ischemia and subsequent tissue loss if the radial artery is disrupted and the ulnar artery is insufficient to maintain perfusion of the hand. Tissue loss would be most likely to occur in the thumb and thenar eminence, as these areas are farthest from the ulnar blood supply. In the event that iatrogenic interruption of radial arterial blood flow leads to hand ischemia, the artery may need to be reconstructed with either primary anastomosis or with a vein graft.

The AT and MAT tests are used to ensure adequate collateral circulation in the hand prior to performing any procedure that has the potential to interrupt blood flow in either the radial or ulnar arteries. The test can also be used as a diagnostic tool for any number of disorders that cause reduced vascularity in the arm. It is most commonly used to assess collateral flow to the hand through the ulnar artery when the radial artery is going to be used for drawing samples for blood gas analysis, cannulation for placement of arterial lines, cardiac catheterization, radial artery harvest for bypass surgeries, and radial forearm flap harvest for reconstructive surgeries.

The radial artery is often selected as a puncture or vascular access site because it is often more readily palpable than the ulnar artery. One of the risks associated with arterial punctures is ischemia distal to the puncture site, which could compromise the limb if there is inadequate collateral blood flow. Though ischemia is only a rare complication of arterial puncture, many healthcare providers do not perform either the AT or MAT prior to accessing the radial artery because there is conflicting evidence supporting the accuracy of this test in assessing ulnar artery patency or adequacy of collateral circulation. A 2007 study by Kohonen et al. found that the MAT had a 73.2% sensitivity and 97.1% specificity for determining circulatory deficits before radial artery harvest for coronary artery bypass grafting.[10]

A 2017 meta-analysis, however, reported a lower sensitivity of 93% and an interobserver agreement rate of only 71.5%, casting some doubt on the test's usefulness.[3] Aragwal et al. more recently acknowledged the MAT's high negative predictive value but advocated for follow-up testing with one of the other objective methods mentioned above in the event of a positive MAT result.[11]

Interprofessional team members, including physicians, physician assistants, nurse practitioners, nurses, and respiratory therapists, should perform an Allen test before cannulating or otherwise disrupting the radial artery. While uncommon, the rare patient may develop hand ischemia with interruption of radial arterial blood flow; for this reason, consistent use of the Allen test can lead to better patient outcomes. 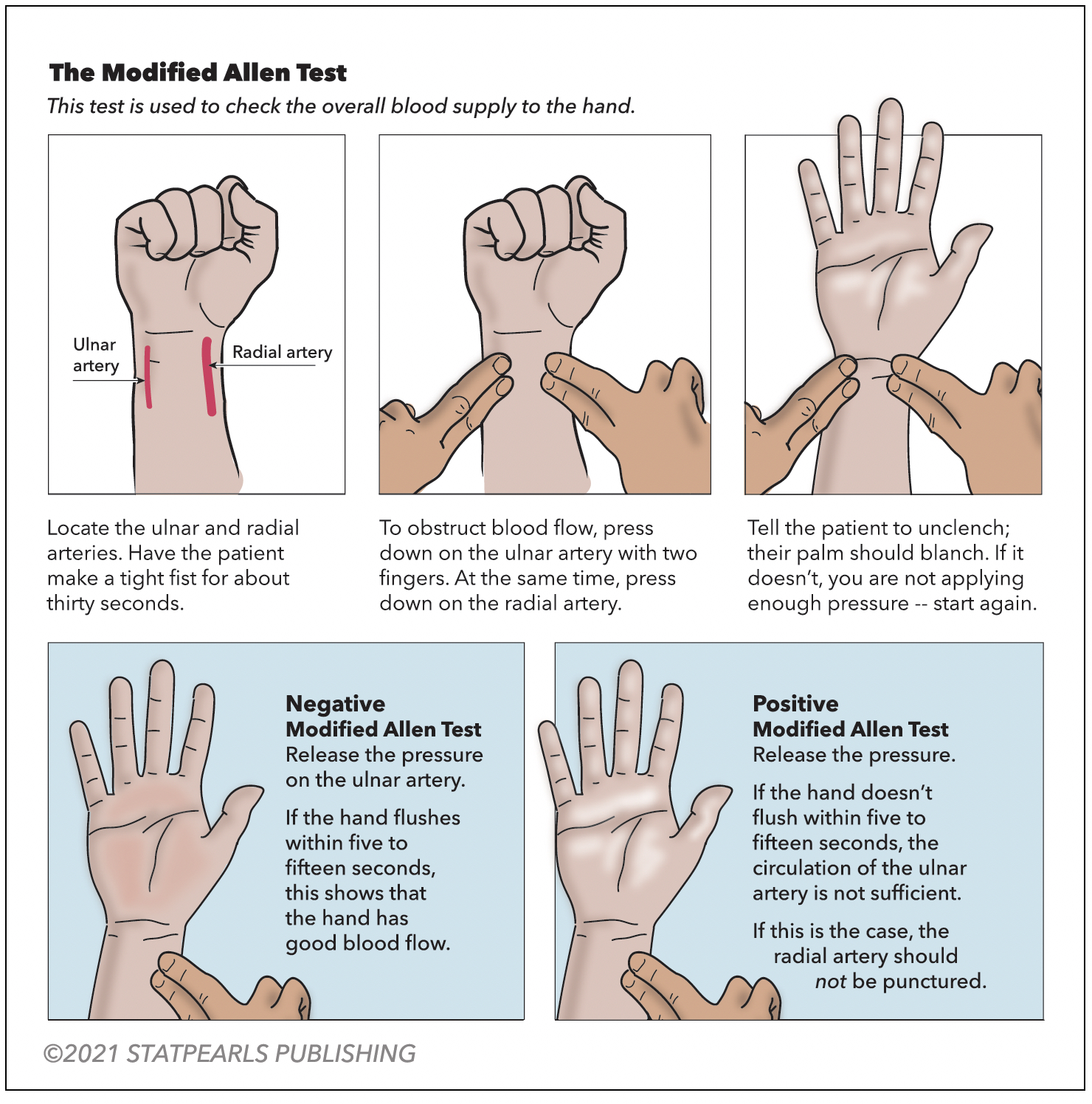