Advancement flaps permit scar camouflage along cosmetic subunit junctions and play a vital role in wound coverage. Advancement flap design and execution require mastery of a few key concepts. These include the direction of the primary tension vector; the management of displaced standing cone(s); the careful consideration of factors that impact flap vascularity. This activity reviews the indications, contraindications, and technique involved in the utilization of advancement flaps and highlights the role of the interprofessional team in the care of patients undergoing this procedure.

Local, random pattern flaps are workhorse reconstructive options for cutaneous defects. Advancement flaps are conceptually the simplest local flaps and fall within the group of sliding flaps, along with rotation flaps. [1][2][3] For these sliding flaps, the tissue is moved or "slid" directly into the adjacent defect without "jumping" over the interposed tissue.

A flap’s survival depends on the delivery of oxygenated blood to the leading edges of the flap. Perfusion of blood through the vascular plexuses decreases as the distance from the feeding artery or arteriole increases. The portions of an advancement flap most vulnerable to necrosis are the distal tip since it has fewer blood vessels to nourish it and is most distant from the feeding artery or arteriole, and the portion of the flap sutured under the greatest tension since the tension from the closure results in compressive forces on blood vessels. [4][5][6]

The ratio of the length of the flap to the width of its pedicle impacts blood flow. As a general guideline, random pattern flaps on the face can sustain a 3:1 length to width ratio, while those on the trunk and extremities may be best designed with a 2:1 ratio. However, these guidelines are not absolute.

The anatomic plane of flap elevation also impacts the flap’s blood supply. Deeper undermining plans include larger caliber arteries with greater perfusion pressures, but critical anatomic structures, such as branches of the facial nerve, may be damaged. Ideal undermining plans for advancement flaps balance flap vascularity with the risk of damaging critical anatomic structures. For the majority of advancement flaps on the lateral face, the preferred anatomic plane is just above the superficial musculoaponeurotic system (SMAS). On the nose, flap elevation and undermining are commonly performed in a deeper and relatively avascular tissue plane, just above the nasal bone or nasal cartilage.

Advancement flaps are modified linear closures with one, or both, apical standing cones moved to the side. When a free margin, such as the eyelid, lip, or alar rim, or cosmetic subunit junction, such as the nasolabial fold or orbitomalar groove, would be violated by a linear closure; advancement flaps may be utilized to direct the standing cones away from these natural boundaries (Figure 1). Additionally, advancement flaps often camouflage scars by placing incision lines along natural creases or cosmetic subunit junctions. Common locations for advancement flaps include the upper and lower cutaneous lip, the nasal sidewall, the infraorbital cheek, and the lower eyelid, the forehead and temple, the preauricular cheek, and the helical rim. [7][8][9]

Patients with wounds that are too large to be closed with the adjacent tissue should be considered more appropriate candidates for reconstructive techniques that recruit skin from more distant tissue reservoirs; for example, transposition flaps, interpolated flaps, pedicled tissue transfer, and skin grafts.

No special surgical equipment is required for performing advancement flaps.

The surgical site is cleansed with a preoperative cleansing solution of the surgeon's choice, and typically, a sterile field is created. For cutaneous surgery, there are multiple case series demonstrating that a "clean," as opposed to a truly "sterile" technique, results in similar rates of postoperative infection.

As with any closure, setting realistic expectations before surgery helps patients prepare for the normal healing process. Beyond typical counseling for infection, bruising, swelling, and scar formation, a few unique situations warrant extra counseling. Advancement flaps on the lower eyelid occasionally are complicated by prolonged postoperative swelling that may take months to completely resolve.  Also, incision lines that fall along natural grooves or creases camouflage well in the long run, but they may be noticeable in the early postoperative if the wound edges are everted. The "tincture of time" and occasional use of intralesional corticosteroids usually corrects the eversion.

The direction in which the flap slides toward the defect is called the primary tissue motion, and the countermovement of the surrounding tissue to meet the flap is considered secondary tissue motion. As opposed to rotation and transposition flaps, advancement flaps do not significantly alter the direction or magnitude of the primary tension vector for wound closure. Both the site of maximal tension and the magnitude of the tension vector required to close an advancement flap is nearly identical to a linear closure in the same location for a given defect. Occasionally, tacking sutures that anchor the flap to immobile deeper structures, such as the orbital rim, or superficial musculoaponeurotic system plication sutures can be used to offset some of the wound closure tension away from the defect.

The standing cones created by an advancement flap may be handled with multiple strategies. Often the entire standing cone is moved laterally in one or two directions. Also, a small standing cone or a portion of a large standing cone can be "sewn out" using the rule of halves along the base of the flap. Alternately, the standing cone may be removed in a crescentic fashion, especially along the Vermillion cutaneous junction and the nasolabial fold or alar groove.

When closing defects arise after the removal of a tumor, especially after Mohs surgery, an initial consideration is whether the surgeon should deepen the defect to a uniform anatomic depth. Deepening the defect to a uniform depth that corresponds to the anatomic plane for undermining permits efficient surgery and ensures that the tissue that "slides" into the wound matches the thickness of the defect.

While not always necessary or preferred, excising tissue between the surgical defect and a nearby cosmetic subunit junction may be helpful. Placing scar lines along cosmetic subunit junctions camouflage scars by hiding them in natural creases and shadows. To motivate this principle with an example, consider the upper cutaneous lip. In this location, relaxed skin tension lines emanate radially from the vermilion-cutaneous junction, and horizontal scars on the cutaneous lip may be very noticeable. Enlarging a wound from the middle of the upper cutaneous lip to the vermilion helps to hide the base of the advancement flap in the vermilion-cutaneous junction.

Infection is the most common complication after flap closure, but it appears to be relatively independent of surgical closure technique (sterile versus clean) according to the Mohs surgery literature. In many instances, infection ensues at the site of flap necrosis. The appropriate depth of flap undermining can minimize this risk. Bleeding with potential hematoma formation is the next most common complication. However, even in patients on multiple blood thinners, hematomas are rare with appropriate intraoperative hemostasis. Lastly, displacement of free margins, such as the eyelid, lip, or nasal alar margin, is a predictable result from flap designs that place tension on these freely mobile structures. To avoid "pulling" on a free margin, the primary tension vector for closure should be parallel to the free margin. [5][10][11]

Advancement flaps are a versatile reconstruction that permits scar camouflage along cosmetic subunit junctions. Advancement flap design and execution require mastery of a few key concepts: the direction of the primary tension vector, handling the displaced standing cone(s), balancing factors that impact flap vascularity, and deciding when to alter the defect. 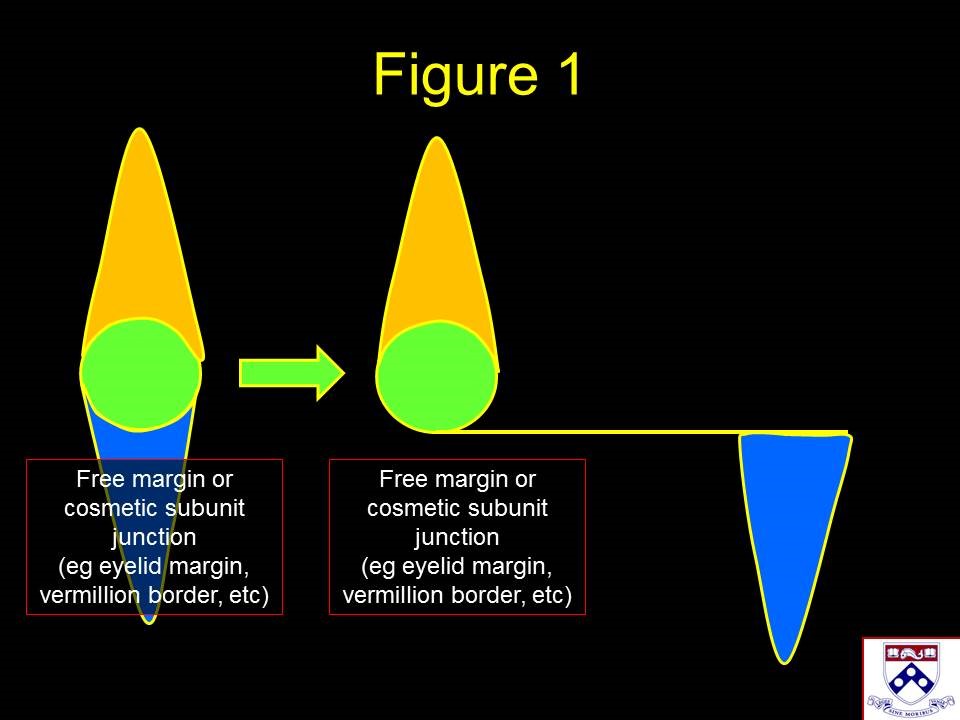 Zeitels SM,Hillman RE, A Method for Reconstruction of Anterior Commissure Glottal Webs With Endoscopic Fibro-Mucosal Flaps. The Annals of otology, rhinology, and laryngology. 2019 Mar;     [PubMed PMID: 30843433]