Assessment of the adductor pollicis function is often utilized as a diagnostic measure for potential ulnar nerve entrapment at the elbow.  These patients typically present with intrinsic muscle atrophy, leading to weakened pinch and grasp strength, difficulty turning keys, and difficulty with activities requiring manual dexterity.  Clinically, patients may display compensatory thumb IP joint flexion (via flexor pollicis longus, innervated by the anterior interosseous nerve) in the setting of compromised thumb adduction strength (i.e. positive Froment sign).  Contralateral comparison is facilitated by asking the patient to grasp a sheet of paper on opposite ends at the same time [11][12].

Injury to the ulnar collateral ligament (UCL) of the thumb occurs secondary to hyperabduction or hyperextension mechanisms imposed at the MCP joint.  Thumb UCL-based injuries range from purely ligamentous injuries to nondisplaced or displaced avulsion fractures of the base of the proximal phalanx of the thumb.  In displaced injuries, surgery is required secondary to the so-called Stener lesion, which constitutes a bony or ligamentous injury that has displaced above the adductor aponeurosis.  These injuries are often called by their respective eponyms,  “Skier’s” thumb (acute) or “Gamekeeper’s” thumb (chronic) and these specific injuries are unable to heal without surgical repair.

Assessment of the movements of the adductor pollicis via ulnar nerve stimulation is a common way to monitor neuromuscular blockade in the field of anesthesia.[14] It is critical to monitor the levels of neuromuscular blockade to accurately avoid complications of ventilatory support. For example, assessment of the level of neuromuscular blockade prior to extubation is critically important as the patient must have adequate diaphragm strength before respiratory support is removed. The test is performed by placing electrodes on the anterior portion of the forearm and delivering electrical signals in order to stimulate the nerve. Because the ulnar nerve innervates additional muscles other than the adductor pollicis, the palm, and other four digits are typically taped down in order to isolate the thumb’s movements only. An accelerometer is then attached to the thumb which is capable of objectively recording the kinematic responses to the specific nerve stimuli delivered via the electrodes. Anesthesiologists are then able to deliver customized signals via the electrodes, and the accelerometer recordings are then able to guide subsequent medication and treatment delivery based on the level of neuromuscular blockade. 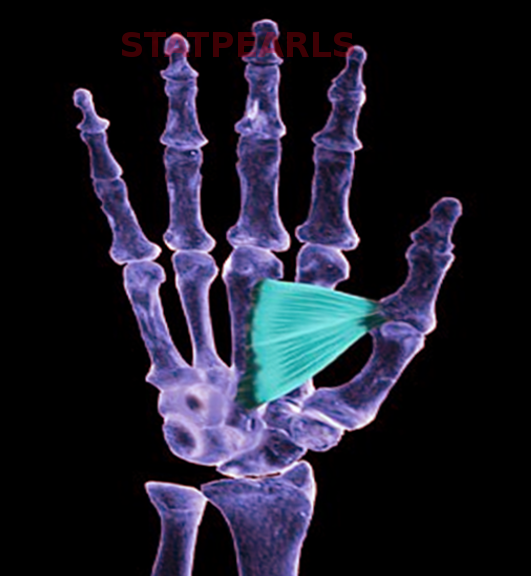