Acetabular fractures primarily occur in young people who are involved in high-velocity trauma. Since the advent of mandatory seatbelt use, there has been a significant reduction of acetabular fractures to approximately an incidence of 3 per 100000. There has been an increase in the number of acetabulum fractures resulting from a fall of fewer than 10 feet, likely due to the increase in osteopenia/osteoporosis. Little has changed since Letournel and Judet’s landmark paper in 1993, and many of their findings remain the “gold standard” for treatment today. Among the most significant advancements has been the advent of percutaneous fixation of certain fracture types. This activity outlines the evaluation, diagnosis, and treatment of patients with acetabulum fractures. It also reviews the role of pre, peri, and post-operative management of acetabulum fractures.

Acetabular fractures primarily occur in young people who are involved in high-velocity trauma.  Since the advent of mandatory seatbelt use, there has been a significant reduction of acetabular fractures to an approximate incidence of 3 per 100000.  There has been an increase in the number of acetabulum fractures resulting from a fall of fewer than 10 feet, likely due to the rise in osteopenia/osteoporosis.[1]  Little has changed since Letournel and Judet’s landmark paper in 1993, and many of their findings remain the “gold standard” for treatment today.  Among the most significant advancements has been the advent of percutaneous fixation of certain fracture types.

The innominate bone forms from the pubis, ischium, and ilium at the triradiate cartilage.  The superior portion of the acetabulum articular surface has the name of the weight-bearing dome.  Blood supply to the external surface is via the superior gluteal artery, inferior gluteal artery, obturator artery, and medial femoral circumflex.  Blood supply to the internal surface comes from the fourth lumbar, iliolumbar, and obturator arteries.  One can visualize the articular surface as an inverted Y with a thick strut of bone connecting it to the sacroiliac (SI) joint, known as the sciatic buttress.  The acetabulum divides into an anterior and posterior column.  The anterior column contains the anterior half of the iliac wing that is contiguous with a pelvic brim to superior pubic ramus and anterior half of the acetabular articular surface.  The posterior column begins at the superior aspect of the greater sciatic notch, contiguous with greater and lesser sciatic notches, and includes the ischial tuberosity.

Acetabular fractures are often high energy and therefore often present in combination with other organ injuries. These fractures have very high morbidity because the damage to the cartilage can lead to disabling osteoarthritis in the future.   In large series reported by Matta, 50% of patients had associated injuries: 35% with extremity injury, most commonly lower extremity, 19% with a head injury, 18% with a chest injury, 13% with nerve palsy, 8% abdominal injury, 6% genitourinary, and 4% spine.[2]  Even isolated fractures of the acetabulum require blood transfusion; high as 35% in one study.[3]  Injury to the sciatic nerve also must be evaluated upon admission.  When a sciatic nerve injury occurs, it almost always involves the peroneal division of the nerve and less commonly also involves the tibial division. Injury to the peroneal nerve division of the sciatic nerve will result in a foot drop.[4]

These are commonly a result of high-speed car crashes, falls from heights, and extreme sporting events.  As mentioned above, the incidence over the past couple of decades has remained stable at 3 per 100000 people per year.  The number of fractures caused by motor vehicle accidents has remained similar, but the number from falls from less than 10 feet has increased.  There has also been an increase in the average age in patients with acetabulum fractures.[5]

Fractures of the acetabulum occur by the impact of the femoral head on the articular surface.[6]  The pattern depends on the position of the hip at the time of impact; external rotation will result in anterior fracture patterns, and internal rotation will result in posterior fracture patterns.  Falls on the greater trochanter will most likely result in an anterior column and/or wall fracture (elderly).

Initial assessment begins with following the standard principles of trauma assessment and resuscitation protocols.  The mechanism of injury should be determined and can help guide treatment.  Physical exam should include whole body evaluation for other signs of trauma/associated injuries.  A complete review of the musculoskeletal system is required, especially of the peripheral nerves and skin.  Soft tissue should undergo evaluation for the possibility of a Morel-Lavalle lesion.[7]

The diagnosis of acetabular fracture is possible just with a plain X-ray, but because many patients have multiple organ injuries, a CT scan is often necessary, which is more precise than a conventional X-ray.  Plain films, with an AP pelvis and Judet views, are often obtained first.  The Judet views include an obturator oblique and an iliac oblique view.  There are six radiographic landmarks identifiable on an AP view of the pelvis and help classify the fracture pattern.[6]  The landmarks are:

The iliopectineal line represents the anterior column and is made up of the pelvic brim and sciatic buttress and greater sciatic notch. The ilioischial line represents the posterior column, which is a tangency of the quadrilateral surface.  The teardrop represents a radiographic finding and is not a true anatomical structure. The lateral limb represents the inferior aspect of the anterior wall and the medial limb forms from the obturator canal and the anterior inferior portion of the quadrilateral surface.  The advent of CT scans has made the diagnosis and classification of acetabulum fractures much easier.  CT axial images are superior to plain radiographs in evaluating the following in acetabulum fractures: Extent and location of acetabular wall fractures, presence of intra-articular fragments, the orientation of fracture lines, the identification of additional fracture lines, rotation of fracture fragments, the status of posterior pelvic ring, and marginal impaction.  2D images are better used for evaluation of the fracture patterns, while 3D imaging may help less experienced surgeons.[8] Dynamic stress X-rays can also be obtained to evaluate for hip stability, usually when there is a fracture-dislocation involving the posterior wall.  The patient is supine with the hip extended and in neutral rotation, then the hip is flexed to 90 degrees, and a manual force is applied while taking plain films.  Any evidence of hip subluxation means hip instability.[9]

By far the most used and most useful classification for acetabulum fractures is that of Letournel.[10]  This system divides fractures into five elementary types and five associated fracture patterns.

The majority of acetabular fractures require open reduction and internal fixation.  Indications for non-operative treatment include[11]:

Evaluation of the vertex (the most superior portion of the roof) on CT scan can help identify fractures that are amenable to non-operative management.  Evaluation involves scanning from the vertex to 10mm inferiorly.  If the CT scan shows no fracture lines involving this area, the fracture can be a candidate for non-operative management; displacement cannot exceed 2 mm.[11]

Indications for ORIF include all fracture patterns that result in hip joint instability of incongruity, bone/soft tissue incarcerated within the joint, or in situations in which non-operative treatment is not a satisfactory option, total hip arthroplasty of percutaneous fixation should be a considered approach.

Percutaneous fixation is gaining popularity, especially as an adjunct to ORIF,  or in sicker patient’s or where extensive approaches not suitable[12][13]:

In general, one should not confuse acetabulum fractures with other fracture types given the advent of CT scans.  Other fracture patterns on the differential include fracture of the pelvic ring and fractures of the proximal femur.  In elderly patients that sustain low energy falls with fractures, one must be judicious about ruling out a pathologic fracture.

The prognosis of acetabulum fractures has generally been poor due to the high energy and multiple associated injuries.  However, with the advent of open reduction and internal fixation, the prognosis is generally regarded as good.  The prognosis has its basis on several factors, including fracture pattern (T-type with the worst prognosis), condition of the hip at the time of injury (femoral head lesions, marginal impaction, gull sign, adequacy of hip reduction, the stability of joint after treatment).  The clinical and radiographic findings at one year are the most reliable guide to prognosis after treatment, as most hips do not improve after this time.

The following complications can occur with acetabular fractures[15][16][17]:

Patients in skeletal traction before the procedure have changes in skin flora because they cannot cleanse perineum; therefore, prophylactic antibiotics should include a first-generation cephalosporin and often supplemented with gram-negative coverage.  Drains are often used for 48 hours or until drainage has ceased.

Heterotopic ossification prophylaxis is for extended or posterior approaches.  Heterotopic ossification prophylaxis includes an irradiation-single dose of 700 to 800 cGy delivered within 72 hours after surgery or indomethacin 25 mg three times daily beginning within 24 hours after surgery and continued for 6 weeks-contraindicated for long bone fractures at risk of nonunion.[17]  The patient is usually toe-touch or flat foot weight-bearing to the affected extremity for 2 to 3 months following surgery, then allowed to weight bear as tolerated.  Physical therapy is generally initiated on postoperative day one.

Deterrence of acetabulum fractures is often unavoidable; however, patients driving motor vehicles should always wear a seatbelt.  Elderly patients should have screening for osteopenia/osteoporosis and DEXA scans, Vitamin D/bisphosphonates, and trip precautions can be used to help avoid fragility fractures and falls.

Acetabular fractures should not be treated lightly, and patients require aggressive hydration, fluid monitoring, and even blood transfusions. The pain can be significant. After surgery, prolonged rehabilitation is necessary to regain balance and strength. 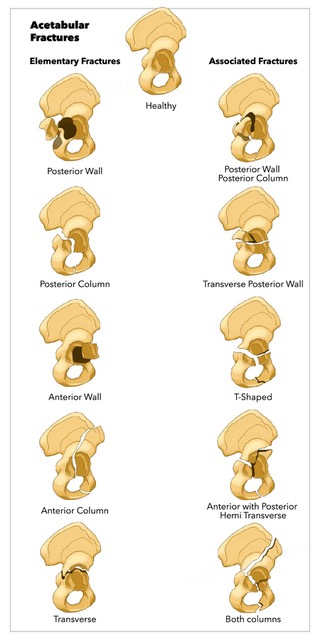 Matta JM, Fractures of the acetabulum: accuracy of reduction and clinical results in patients managed operatively within three weeks after the injury. The Journal of bone and joint surgery. American volume. 1996 Nov;     [PubMed PMID: 8934477]