Many different factors can cause gallbladder dysfunction. Long periods of fasting, total parenteral nutrition (TPN), and drastic weight loss can all increase the incidence of acalculous cholecystitis. Often other more serious conditions are present. Patients in the intensive care unit or those recovering from major surgeries or other serious ailments such as a stroke, heart attack, sepsis, severe burns, and extensive trauma are all at a higher risk to develop acalculous cholecystitis. Gallbladder stasis secondary to lack of gallbladder stimulation leads to the concentration of the bile salts with a build-up of pressure within the organ. This leads to ischemia, pressure necrosis and eventual perforation. This static condition also increases seeding and growth of enteric pathogens such as Escherichia coli, Klebsiella, Bacteroides, Proteus, Pseudomonas, and Enterococcus faecalis. Individuals with chronic acalculous cholecystitis may have decreased function of gallbladder emptying, hypokinetic biliary dyskinesia. This may be from a variety of factors including hormone-related, vasculitis, and decreased nerve innervation from conditions such as diabetes. Often the exact etiology of chronic acalculous cholecystitis is unknown.[4][5]

Acalculous cholecystitis accounts for ten percent of all cases of acute cholecystitis and 5% to 10% of all cases of cholecystitis. It has an equal predisposition between males and females. However, males are more likely to develop acute acalculous cholecystitis after surgery. Rates are increased in HIV and other immunosuppressed patients. These individuals are more susceptible to certain opportunistic infections such as microsporidia, cytomegalovirus (CMV), and Cryptosporidium, which can seed and flourish in bile within the gallbladder. Carriers of Giardia lamblia, Helicobacter pylori, and Salmonella typhi are also associated with increased risks to develop cholecystitis.[6][7]

Stasis of the gallbladder results in the build-up of intraluminal pressure. This eventually results in ischemia of the gallbladder wall and inflammation. This stasis can also lead to the colonization of bacteria which contributes to the inflammatory response. If the pressure is not relieved, the gallbladder wall will become progressively ischemic eventually resulting in gangrenous changes and perforation. This will lead to sepsis and shock. These findings are referred to as acute cholecystitis. Chronic acalculous cholecystitis usually presents more insidiously. Symptoms are more prolonged and may be less severe. Symptoms may also be more intermittent and vague, although patients can present with signs of acute biliary colic.[6][8]

There are varying degrees of inflammation found with acalculous cholecystitis. Findings are similar to calculus cholecystitis, only with an absence of gallstones. The gallbladder wall will be thickened to variable degrees, and there may be adhesions to the serosal surface. Smooth muscle hypertrophy, especially in chronic conditions, is present. At times sludge or very viscous bile can be seen. These findings are usual precursors to gallstones and are formed from increased biliary salts or stasis. Various species of bacteria can be present in 11% to 30% of the cases. Rokitansky-Aschoff sinuses are present 90% of the time in cholecystitis specimens. These are a herniation of intraluminal sinuses from increased pressures possibly associated with ducts of Luschka. The mucosa will exhibit varying degrees of inflammation from mild to ulcerations with gangrenous changes. Extreme situations may show total gangrenous changes of the gallbladder with perforation.[9]

Mild cases of acalculous cholecystitis are usually only treated for symptoms of biliary colic. Cases of acute cholecystitis can lead to sepsis and shock. The pressurized intraluminal gallbladder bile can be susceptible to bacterial seeding. Antibiotics are usually ineffective due to the increased intraluminal pressure and compromise of the intraluminal blood supply. Eventual perforation will lead to bile peritonitis and contribute to the shock condition. The release of inflammatory byproducts also contributes to shock and susceptibility to sepsis.

Mild acalculous cholecystitis may present similarly to calculous cholecystitis. Patients may have right upper quadrant abdominal pain, reproduced with deep palpation (Murphy's sign). Nausea, food intolerances, bloating, and belching may also be present. Signs of acute acalculous cholecystitis exhibit an abrupt onset of symptoms of severe right upper abdominal pain. There may be a palpable distended gallbladder. These patients present as being very ill, possibly septic and are in an ICU setting. Their white blood cell count is usually, but not always, elevated. Often they have been in the hospital for other significant illnesses or are recovering from major surgery.

Blood work is not diagnostic but will reveal an elevated WBC and abnormal liver function tests.

The diagnosis of acute acalculous cholecystitis can often be made with an ultrasound of the abdomen. The gallbladder will show a significantly thickened wall with edema and possible pericholecystic fluid. CT scans may also make this diagnosis. If there is still uncertainty about the diagnosis, then a HIDA scan can be done. Acute cholecystitis will result in no filling of the gallbladder with the radionuclide material.[5][10]

Patients with acalculous cholecystitis are very ill and need to be stabilized before any procedure can be done. In those patients who are unstable, one may consider the placement of a percutaneous drainage tube in the gallbladder by the radiologist. Another option is Stent placement via ERCP to decompress the gallbladder.

Chronic acalculous cholecystitis is treated the same as cholecystitis with stones. Laparoscopic cholecystectomy is the treatment of choice. An open cholecystectomy can also be performed if there is a contraindication to laparoscopic surgery. Acute cholecystitis must be addressed fairly urgently because rapid progression and deterioration may result if untreated. The best definitive therapy is cholecystectomy, either laparoscopic or open. If the patient is too unstable to undergo major surgery, then percutaneous drainage is needed with possible definitive cholecystectomy at a later date. Administration of broad-spectrum antibiotics is routinely done. However, this is usually not effective. There is minimal penetration of antibiotics into the pressurized gallbladder, but they will help treat any systemic bacteremia.[4][11][12]

Acalculous cholecystitis is a serious illness that has high morbidity and mortality. The reported mortality of the condition varies from 30%-50% depending on the age of the patient. Even those who survive have a long recovery that can take months.

Most patients are kept on bowel rest until the clinical status has improved. Thus, intravenous (IV) hydration is necessary.

Acalculous cholecystitis is a life-threatening disorder that can rapidly prove fatal. Most patients are old, frail and have many comorbidities. Because of the complexity in management, the condition is best managed by an interprofessional team that includes the following:

Patients with acalculous cholecystitis are often very ill and need ICU monitoring. The nurses looking after these patients must have a high suspicion of the disorder because often the signs and symptoms of sepsis are vague. Fluid intake and output have to be closely monitored together with the respiratory status. These patients need DVT and peptic ulcer prophylaxis and incentive spirometry.

Because the patients are kept NPO, a dietary consult should be requested to determine the need for IV nutrition.

The radiologist must be aware of the patient's admission because percutaneous drainage of the gallbladder may be urgently required. The gastroenterologist may need to perform an endoscopy to place a stent at the ampulla of Vater to decompress the gallbladder.

Because patients are frail, bedside physical therapy is needed to regain muscle function and strength.

Finally, the general surgeon may need to perform an urgent cholecystectomy in patients with gangrene.

The outcome of patients with acalculous cholecystitis is guarded. Over the years the mortality of acalculous cholecystitis has decreased but still remains about 10% despite optimal treatment. These patients often develop fulminant sepsis, ARDS, multiorgan failure and also have a high incidence of adverse cerebrovascular events. Most case reports indicate poor outcomes and even patients who survive have a prolonged recovery period but never attain full functional recovery.[10][13] (Level V) 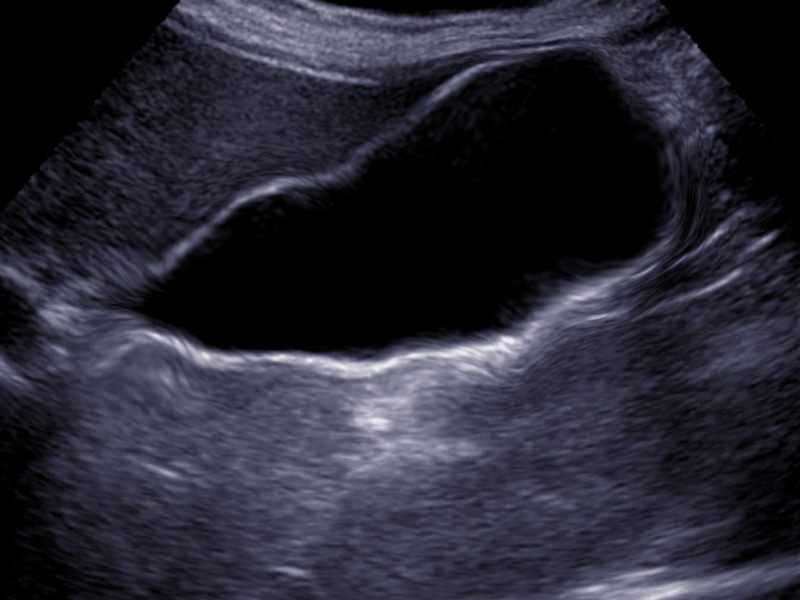