Tiselius used a liquid medium that had less resolution due to the effect of gravity and diffusion. Electrophoresis utilizes solid support media with buffers to overcome these obstacles. Molecules with similar charge, mass, shape, and size tend to move together and are separated in distinct bands or zones. Whatman filter paper, agarose, cellulose acetate, polyacrylamide, etc., are examples of such solid support mediums.[1]

Functions of Each Component of the Electrophoresis Apparatus

Size, Shape, and Net charge of the Molecule

Strength of the Electrical Field

Whatman Filter Paper: Whatman’s filter paper is used as a support medium. As it requires long run-time (12-16 hours) and low voltage for separation, the resolution is poor due to the increased diffusion of separated analytes.[4][5]

Cellulose acetate: Cellulose acetate membrane is one of the preferred solid media as it requires less run-time (<1 hour). Due to this, the resolution of separated bands is far superior to paper electrophoresis. Though it is expensive, it is widely used for separating lipoproteins, proteins, enzyme isoforms, and hemoglobin variants due to superior resolution and less interaction with analytes in a sample.[5][6]

Agarose gel: Agarose is a type of heteropolysaccharide. It forms a viscous solution when dissolved in a hot buffered solution (50 to 55-degree Celsius), but it solidifies as a gel on cooling down. It is used to separate serum proteins, hemoglobin, nucleic acids, polymerase chain reaction products, etc. Fixed sulfate groups present in agarose can reduce the resolution of bands due to increased electroendosmosis. This can be prevented by using ultrapure agarose gel with low sulfate content.[5][7]

Polyacrylamide gel: It is formed by polymerization of acrylamide and bis-acrylamide in the presence of ammonium persulfate, N, N, N’N’-tetramethylethylenediamine (TEMED) & riboflavin in the presence of ultraviolet (UV) rays. The pore size of the gel can be very well controlled by adjusting the concentration of monomers. This gel can be used for a wide variety of analytes such as proteins, peptides, nucleic acid, nucleotides, etc. It can provide excellent resolution due to better molecular sieving and minimal interaction of sample molecules with the matrix.[5][8]

If protein solution is boiled briefly in the presence of sodium dodecyl sulfate (SDS) and mercaptoethanol, proteins in the solution get denatured, and they acquire a uniform negative charge which masks the native charge of the protein. This produces polypeptide chains with a constant charge-to-mass ratio with a uniform shape. In this condition, electrophoretic mobility will depend on the number of amino acids and mass of the polypeptide chains.[5][9]

Other Variants of Electrophoresis

Isoelectric focusing (IEF): Gel matrix is filled with ampholytes (molecules with both positive and negative charge), and a pH gradient is formed. When the electricity is applied, molecules migrate towards their isoelectric pH. The mobility of sample molecules stops at their respective isoelectric pH, where the net charge on the sample molecule will be zero. IEF can provide excellent resolution and fractionation of serum proteins and hemoglobin variants.[5][10]

Immunoelectrophoresis and immunofixation electrophoresis: Initially, proteins are separated on the agarose gel. Wells are created after separation, and specific antibodies against molecules of interest are added. Bands of precipitation due to antigen-antibody reaction are formed, which signifies the presence of a specific protein in the sample. It is used to identify the abnormal elevation of gamma globulin fractions and free light chains in patients with suspected monoclonal or polyclonal gammopathy.[11]

High voltage electrophoresis: Relatively higher voltage (400 to 2000 Volts) is used instead of 250 Volts for separation. It provides very fast separation with good resolution and relatively less diffusion. It is used for the separation of proteins, hemoglobin, and nucleotides.[5]

Capillary electrophoresis: Very small diameter capillary tube filled with buffer solution, ampholytes, or gel is used as a support medium. Due to the availability of a higher surface area for heat dissipation, very high voltage can be applied for speedy separation and better resolution. Separated fractions can be quantified simultaneously as they pass through the detector during the electrophoretic run.[13]

Depending on the type of electrophoresis and disease involved, specimen requirement and processing vary. Serum, plasma, whole blood, and hemolysate are the most commonly used biological specimens in diagnostic laboratory setups.

Confirmation of sample details with the test requisition form is done. Initial processing of the sample is per procedure requirements.

Serum or plasma can be separated using centrifugation from plain or anti-coagulant-containing vials. Serum and plasma are used to assess and quantify protein fractions to diagnose disorders related to their synthesis or disposal. Hemolysate can be prepared using buffers and whole blood specimens from the anti-coagulant-containing vial. Hemolysate is used to assess and quantify hemoglobin fractions to diagnose hemoglobinopathies and thalassemia.[14]

Nucleic acid extracts and PCR products can be used after mixing them with sucrose, buffer, and tracking dye. After setting up the instrumentation and gel, the sample is applied, and the electrical supply is started. When tracking dye completes a run of approximately 80% of the gel, the electrical supply is turned off, and the separation of bands is quantified using densitometry.[14][15]

The major interfering factors are heat, non-specific adsorptive groups on the support medium, and electroendosmosis. As the current and duration of electrophoresis increase, the gel's temperature increases due to heat dissipation. This will increase the random motion of the molecules in the medium, reducing the sharpness/resolution of the separated bands.

Non-specific adsorptive groups present on the support medium lead to the binding of analytes with these groups and hinders their mobility across the gel. As described earlier, electroendosmosis generates ion flow opposite to the direction of analytes motion leading to a reduction in resolution.[16]

After the electrophoresis run is over, the gel is stained for the analyte of interest. After incubation with the staining solution, excess of the stain is removed by treating the gel with the de-staining solution.

The electrophoresis technique can also be used to identify abnormally elevated or decreased enzyme isoforms. Various clinical conditions show specific enzyme patterns based on tissue/organ involvement which can help the clinician to diagnose and develop a treatment plan for the case. The following table shows the tissue origin of different isoforms of some plasma non-functional enzymes of clinical significance.

The utility of electrophoresis is not limited to diagnostics. It is widely utilized for research in genomics and proteomics. Restriction fragment length polymorphism (RFLP), nucleotide sequencing, next generation sequencing, southern blotting, western blotting, etc., are examples of a few techniques having electrophoresis as one of the steps in it. DNA fingerprinting is the technique utilized by forensic experts to compare DNA acquired from the crime scene and the DNA of the suspects and/or victims. DNA fingerprinting is also utilized for confirmation of the biological parents of a child in case of a dispute.[26]

Commercially available controls are utilized to compare the movement of the analyte of interest. They are widely used for hemoglobin, serum protein, and nucleic acid electrophoresis.

Caution is necessary when preparing electrophoresis gel, buffer preparation, setting up apparatus, running of electrophoresis, staining, and visualization of the analyte. Monomers used in polyacrylamide gel preparation are carcinogenic. The catalyst used in polyacrylamide gel preparation can cause free radical-related damage to the skin if contacted. None of the solutions should be mouth pipetted. Barbital buffer containing sodium barbiturate is a known central nervous system depressant. Ethidium bromide used in nucleic acid staining is a known carcinogen. Direct exposure of the eye to ultraviolet rays during the visualization of the gel can cause severe damage to the eye.[27]

The diagnosis of the medical condition via electrophoresis is optimally performed and used with an interprofessional team that includes internal medicine, biochemistry, and laboratory medicine experts, along with nurses and laboratory technicians. 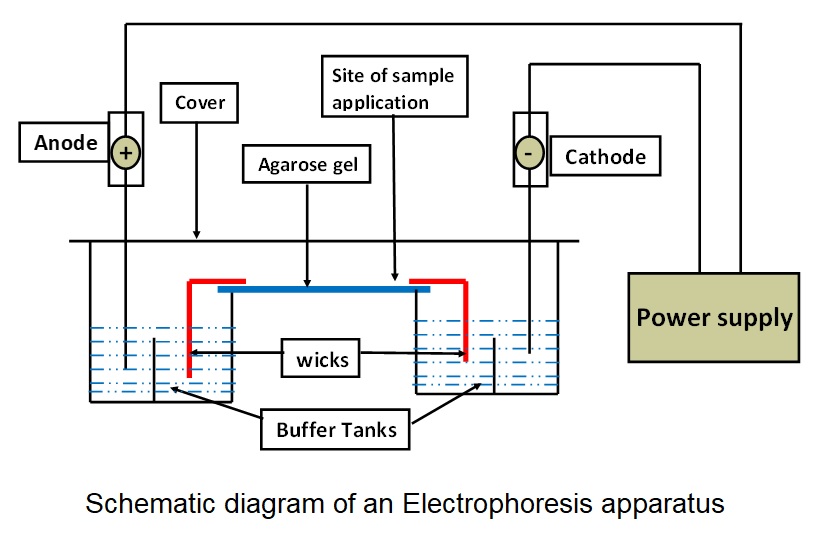