Fundus photography is taking the image of the retina of the eye with a fundus camera. Fundus photography is important for diagnosing and treating various posterior segments and other ocular diseases. The illumination and reflectance of the retina occur through the common optical path, i.e., the pupil. Jackman and Webster were the first to publish retinal photographs in 1886.[1] Carl Zeiss was the first commercially available fundus camera in 1926.[1] Hansell and Beeson attached the electronic flash tube enabling light to be directed through the pupil.[2]

The retina is the neurosensory part of the eye where light impulses from an object are converted to electoral impulses that travel to the brain, and the person receives the details of the object. The imaging of the retina poses difficulty because the retina must be illuminated and imaged simultaneously through a narrow pathway, i.e., the pupil.[3]

Any pathology of the posterior segment of the eye can be detected with a fundus camera. The common indications are enumerated in the following table.

A fundus camera is a complex system with multiple lenses and a camera utilizing the principle of indirect ophthalmoscope (Figure-2). The parts of a typical fundus camera are shown in the figure (Figure-3).

Due to the presence of a mask in the uppermost lens (Figure 4, uppermost lens), the light is finally focused as a donut-shaped beam. This donut-shaped light beam falls on another round mirror with a central aperture (Figure-4, round mirror-3 with a central aperture), and the reflection exits the camera system through the objective lens and enters through the cornea into the eye (Figure-4, donut-shaped light through a dilated pupil), the photo of which is to be taken.

Over time, there have been many upgrades to the traditional table-top fundus camera. These are as described below.

Advantages of WFI and UWFI

Using Mirante, the cSLO-based multimodal imaging platform, in addition to the UWF fundus photo, the additional features like FFA, ICGA, FAF, and retro mode imaging for visualizing pathologies deeper than the retinal pigment epithelium (RPE), and detecting pathologic changes in the choroid, OCT, OCT-Angiography, and an anterior segment OCT with an additional adapter can be performed.

Red-free fundus photography (RFFP): The red-free fundus photography (RFFP) is monochromatic retinal imaging that uses gree contrast filters and enables an excellent view of the retina as the peak spectral sensitivity of the human eye falls in the green-yellow range of the spectrum. Retinal vasculature and nerve fiber layers are better seen in RFFP. The RFFP image is routinely taken as a baseline image before the FFA.[34]

Fundus autofluorescence (FAF): The FAF uses the fluorescent properties of the fluorophores. The important fluorophores in the retina are lipofuscin and melanin. Lipofuscin is a byproduct of the lysosomal breakdown of the outer photoreceptor segments within the RPE. The concentration of the lipofuscin pigments increases from the equator of the retina to the posterior pole, except for the fovea.

In BAF, the fovea is darker (hypo-autofluorescent) due to less lipofuscin at the fovea. In contrast, in NIRAF, the fovea is brighter (hyper-autofluorescent) due to the highest concentration of melanin in this region. FAF has diagnostic and prognostic utility in various diseases like central serous chorioretinopathy (CSCR), age-related macular degeneration (ARMD), retinal dystrophies, and uveitic entities like choroiditis. FAF images of the retina can be taken in a conventional fundus camera with a 50 to 55-degree field of view with the facility of FAF. UWF FAF is available in Optos, Heidelberg Spectralis, Mirante, and Clarus.

The blue reflectance is better than the green reflectance for detecting dissociated optic nerve fiber layer after internal limiting membrane peeling.[37] Multi-color images are captured at both 30 degrees and 55 degrees in the Heidelberg Spectralis machine. In the Mirante imaging system, 163 degrees UWF multi-color images with single image capture are possible. MCI has been beneficial in diagnosing and managing diseases like ARMD, diabetic retinopathy, vitreoretinal interface disorders, retinal vein occlusions, and retinal dystrophies.[38]

Smartphone-Based fundus cameras: Recently, smartphone-based fundus imaging has been proven to be a low-cost alternative to standard fundus photography. It can capture images in both the dilated and undilated pupils. It has an immense role in screening diseases like DR, ARMD, ROP, and Glaucoma. It is becoming a boon for teleophthalmology.[40] Low-cost fundus cameras have been developed to help screen for retinal diseases in remote parts of the world.[41]

Fundus photography by a fundus camera can be performed by an ophthalmologist, optometrist, paramedical personnel, mid-level ophthalmic practitioner (MLOP), or anyone trained in ophthalmic photography.

Before obtaining the fundus images, the patient should be informed about the procedure and the purpose of the test. The chin rest, forehead rest, and the holding support of the camera should be cleaned with an alcohol swab to maintain hygiene. If the patient wears a spectacle, they should remove the spectacle. The patient should sit and position themselves in the chinrest and forehead rest comfortably. Most fundus cameras need pupillary dilation for an optimal image free of artifacts.

A photo of one eye of the patient is taken at a time. First, align the circle on the screen with the patient’s iris and pupil. Adjust the height to make the three white dots in a symmetric position. Then focus on the retina of the patient. Ask the patient to focus on the green light they see. Adjust the joystick forwards, backward, and sideways to get a sharper view of the two dots on the three o clock and nine o clock positions (to ensure the optimal distance of the camera from the eye) or a sharper image of the reticules.

There is an indicator indicating the good focus of the retina (two vertical lines which have to be aligned in some cameras). For manual capture, the eyepiece must be correctly set. The photographer must wear the refractive error corrections, if any. The accommodation of the photographer must be at rest. When the reticules are sharper, and the view of the retina is sharper, the button is pressed to capture the image (Figure-5). Fundoscopy has been taught to students using virtual platforms, which proved useful, especially during the COVID pandemic.[46]

Stereophotography uses two images taken from the right and left, which are then viewed with a stereo viewer. Optional lenses must be employed for focusing anterior objects (mid-vitreous, anterior segment). To focus posterior objects or the retina in pathological myopia, minus lenses have to be added. For extremes of refractive errors (around +15 diopter or -15 diopters), the autofocus function of the fundus camera may not work, and manual focusing should be used to focus the retina.

As a non-invasive technique, fundus cameras do not have complications. However, there is a risk of cross-infection from patients with active eye infections like conjunctivitis to the other patients who undergo fundus imaging in the same camera. Also, the strong flashlight might not be tolerable to some patients with photophobia.

Multiple artifacts (figure) may occur during the use of the fundus camera.

The traditional tabletop fundus cameras with a 50-degree field of view can detect the pathology of the posterior pole of the eye. The wide field and ultra-widefield fundus cameras are helpful in the imaging of retinal pathology beyond the equator of the retina. The presence of predominantly peripheral lesions in DR can be detected with the help of UWFI and carries a higher risk of progression to PDR.[47]

The contact ultra-widefield fundus camera for a neonatal eye examination (RetCam) has been used extensively for the diagnosis and follow-up of neonates at risk with and suffering from retinopathy of prematurity (ROP). This camera is portable and can be taken to remote places.

Bog data, machine learning, and artificial intelligence are promising in improving healthcare.[48] The integration of AI into the fundus cameras has shown good accuracy for the detection of diseases like DR. Machine learning algorithms using preoperative fundus photography along with some other preoperative data, including anterior chamber depth, central corneal depth, age, planned ablation thickness, has been shown to identify at-risk eyes for postoperative myopic regression after refractive surgery.[49]

Deep learning algorithms using fundus photographs have been used to predict cerebral white matter hyperintensity in magnetic resonance imaging (MRI) scans.[50] A deep learning framework for the earlier detection of DR from fundus images has been developed, and it could differentiate the healthy and harmful images with 95.6% precision.[51] Studies using AI to establish the role of fundus photos, OCT, and external eye photography with systemic diseases and parameters show promising results.[52]

AI for the screening of DR has shown a lot of promise. These findings underscore the prospective role of AI integrated fundus imaging in the screening, diagnosis, and management of different retinal diseases.[53]

Combining OCT imaging with fundus photography has been shown to increase the efficacy of glaucoma screening.[54] This combination has also been shown to effectively diagnose cases of high myopia with retinopathy.[55] This approach demonstrates the beneficial role of multi-modal imaging. Studies on handheld fundus cameras are on the rise. Comparative studies have shown that the handheld fundus camera effectively diagnoses referrable cases of DR.[56]

Similarly, smartphone-based fundus imaging is on the rise and is most useful for teleophthalmology. However, in detecting ROP, though the smartphone-based cameras provide a moderate agreement for the detection of the presence or absence of plus disease, they failed to identify the stages and zones of the disease.[57]

The fundus camera plays an important role in diagnosing and managing ophthalmic diseases. Apart from the ophthalmologists, optometrists, ophthalmic photographers, and paramedical workers are involved in taking images in the fundus cameras. While doing fundus fluorescein angiography or indocyanine green angiography, the nurses should be aware of the possible side effects of the dye-related invasive procedure.[29][30]

Coordination between all the team members and caregivers and updating their knowledge about the fundus photography and procedures related to the fundus cameras is crucial.

Nurses are involved in the procedure of fundus photography. Their support during any side effects of the procedures like fundus fluorescein angiography is vital. They should possess strong knowledge regarding the emergency medicines needed during any complications related to the investigations.

Retinal diseases are associated with various systemic illnesses like diabetes, systemic hypertension, and systemic drug toxicity. Clinical history provided by colleagues from specialties other than ophthalmology will help interpret the fundus images. 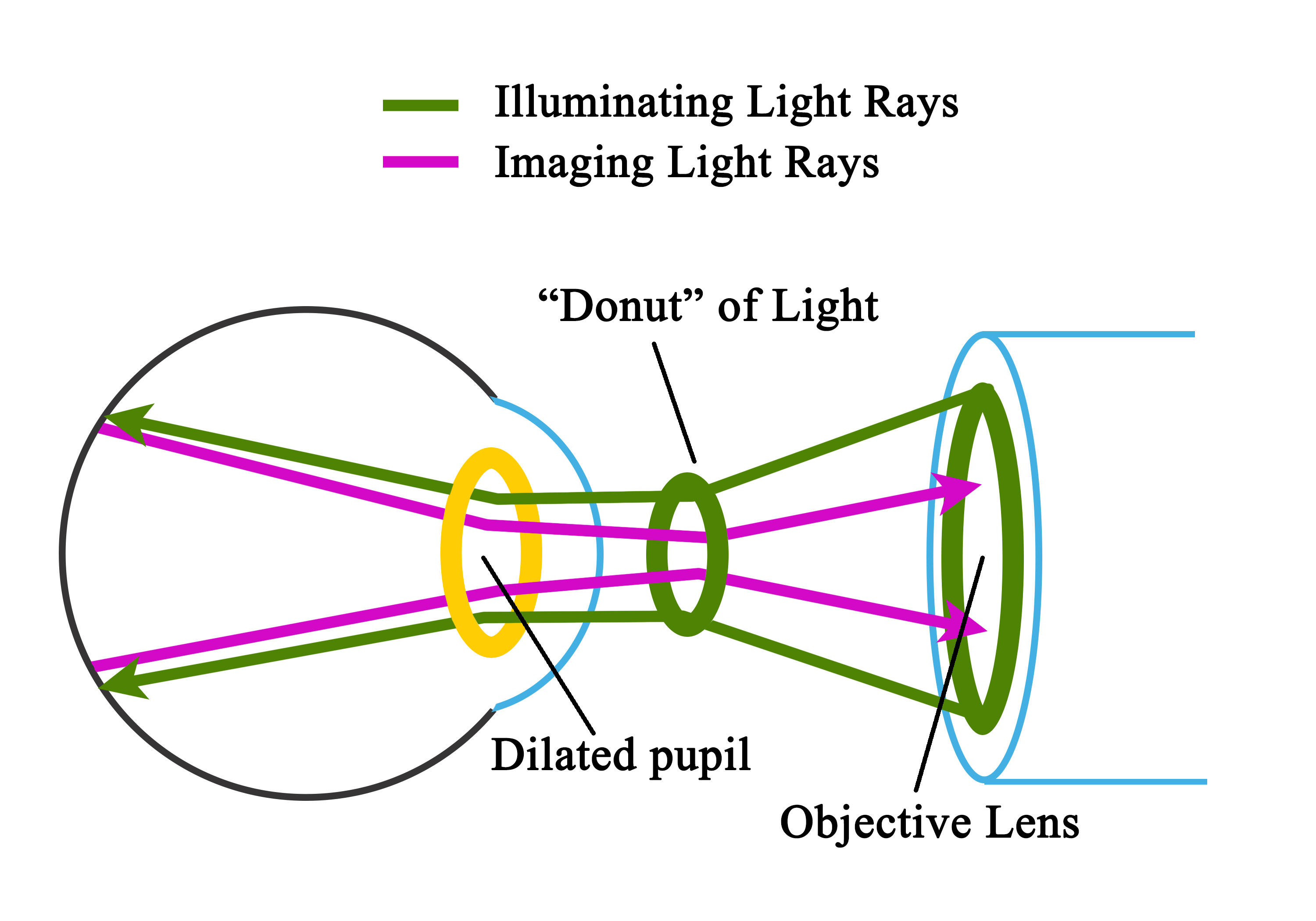 Illumination and imaging of the retina through the pupil
Contributed by Dr. Chitaranjan Mishra, DNB 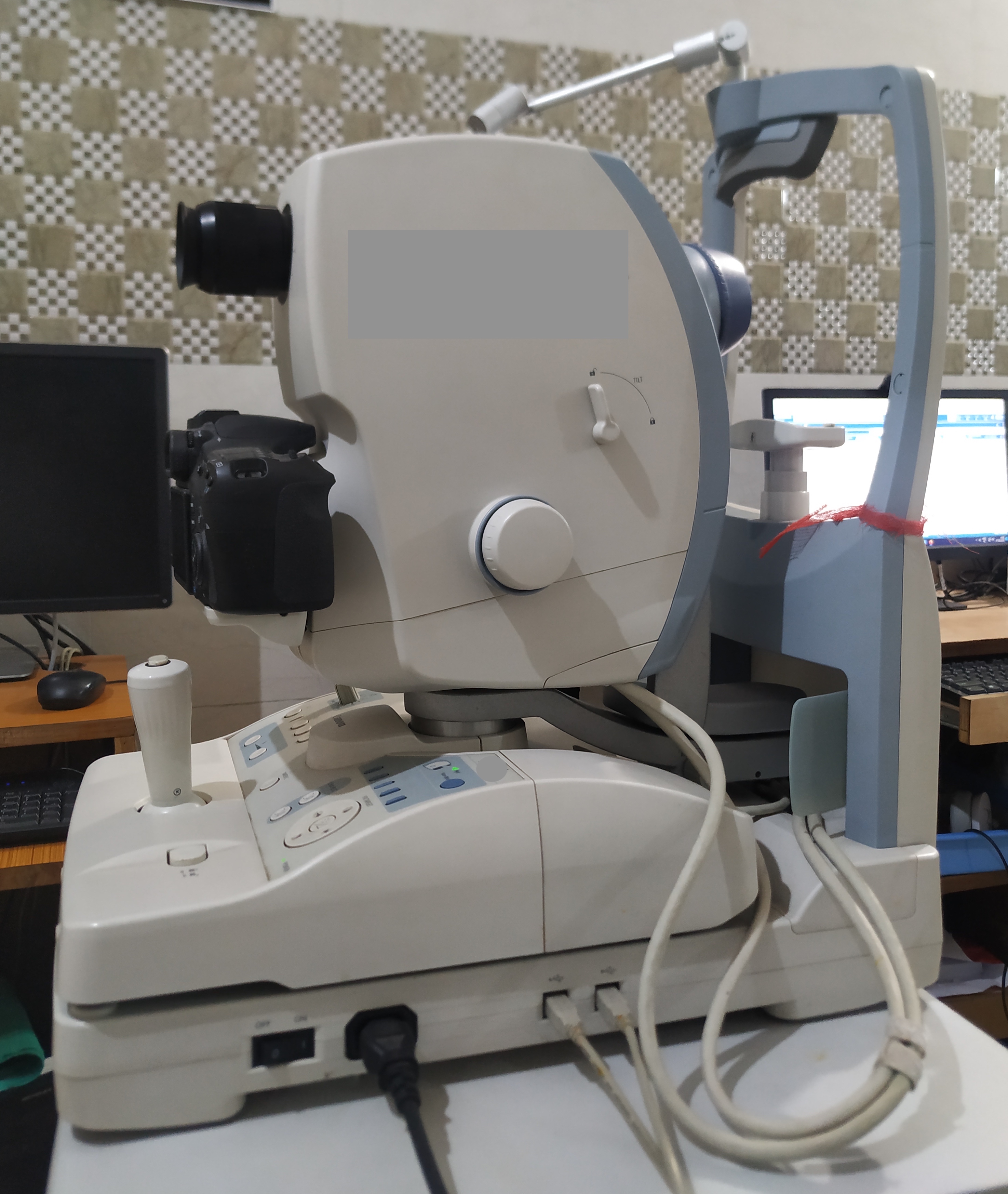 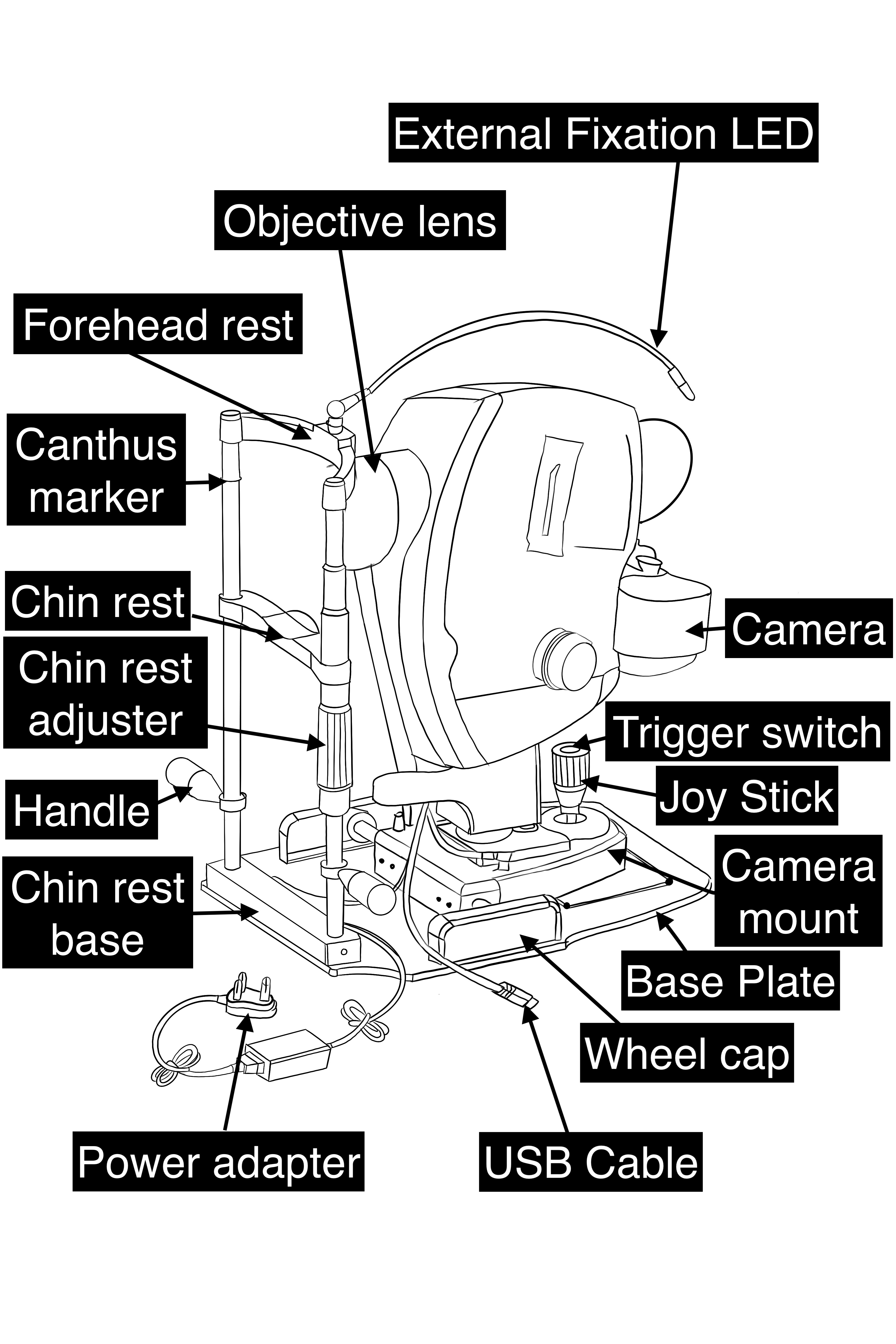 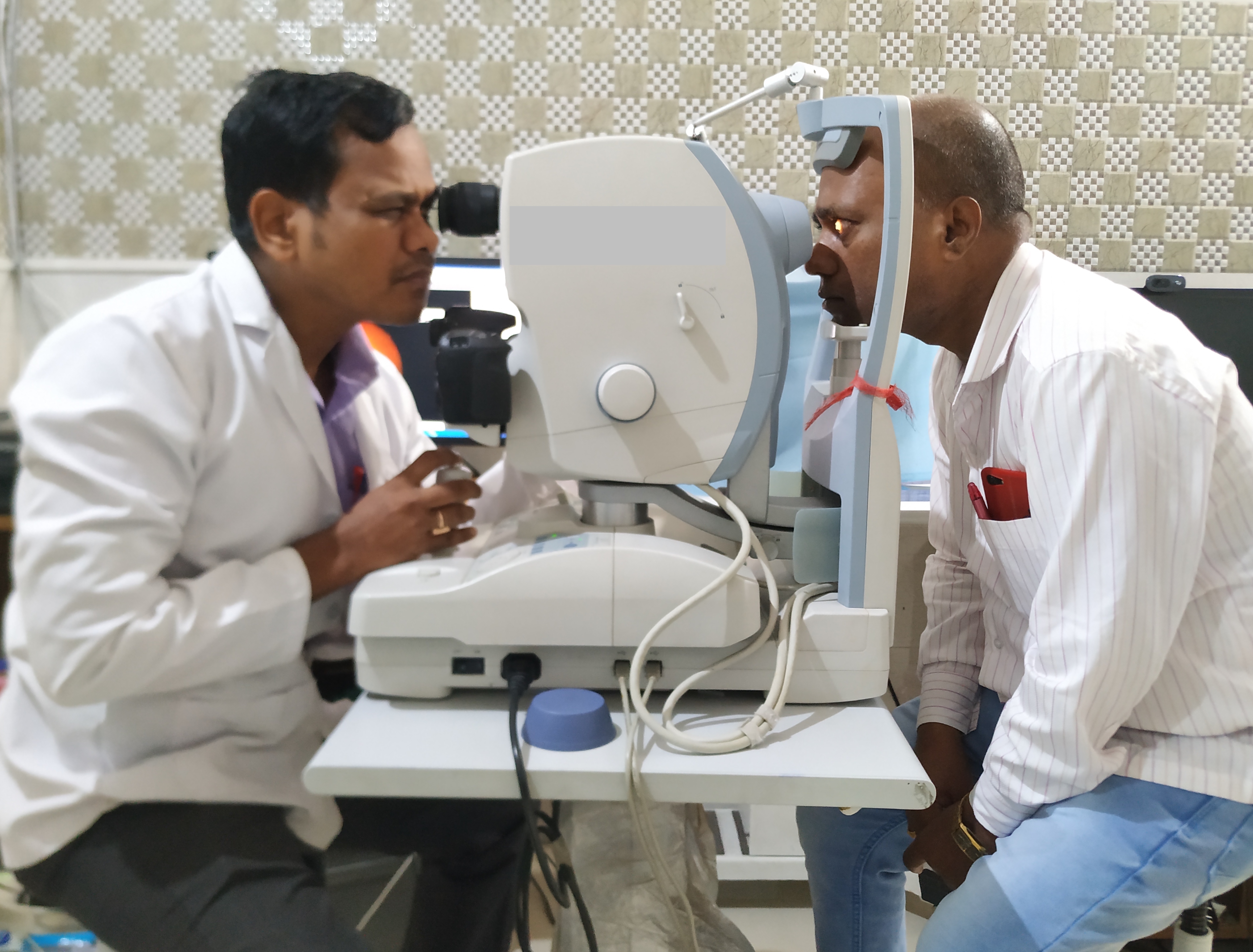 Fundus photo being taken in a fundus camera by the photographer
Contributed by Chitaranjan Mishra, DNB, FICO, MRCS Ed 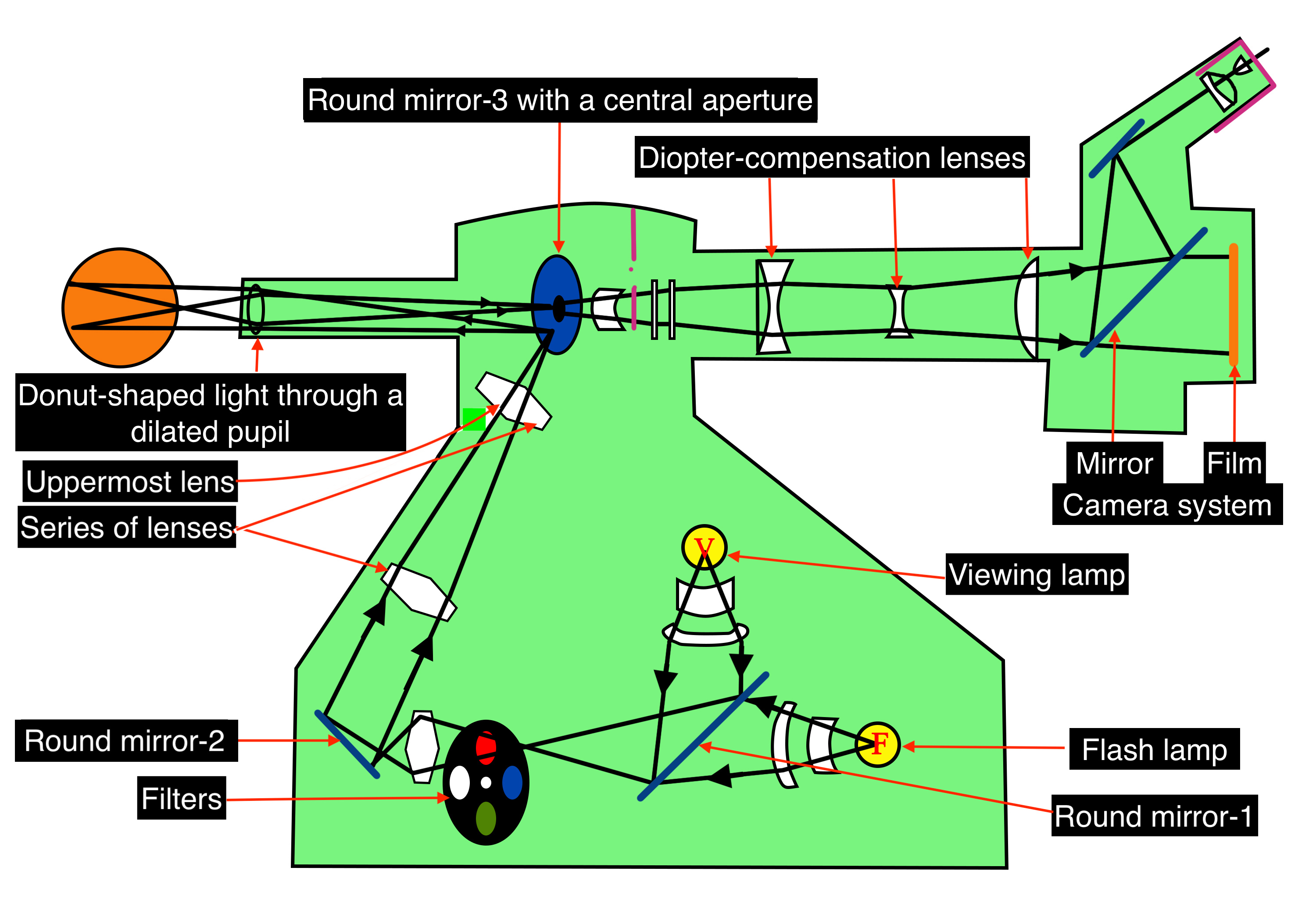