The suboccipital release is a frequently performed OMM technique due to its simple setup and versatility. This technique requires minimal equipment and patient positioning, thus making it easy for providers to perform. Typically, this technique treats migraines, headaches, and neck pain. It can also be used as an adjunct for treating conditions with autonomic dysfunction. This activity outlines and explains the indications and procedures for performing suboccipital release and examines the role of the healthcare team in improving care for patients who undergo suboccipital release.

Acute musculoskeletal pain is one of the most prevalent complaints in inpatient and outpatient settings. Many patients receive pharmacologic treatment for these complaints. Osteopathic manipulative treatment (OMT) allows providers to have another treatment option that is easily accessible. OMT involves manual manipulation of muscles and fascia to reduce pain and tension and help facilitate the body's own restorative functions.[1]

Somatic dysfunction is defined as an imbalance within the musculoskeletal system. Osteopathic physicians are often taught to look for such imbalances through tissue texture changes, spinal alignment asymmetry,  limited joint range of motion, or tenderness.[2] Most osteopathic physicians are taught the mnemonic, TART, to look for these changes related to somatic dysfunctions. Acute findings can include edema, erythema, and sharp pain.

Chronic findings can include ropy texture and cool skin. These findings on the physical exam can correlate to viscero-somatic reflexes, which are visceral dysfunctions presenting as a somatic finding. A typical example of this is in cholecystitis; there are typically spinal changes around the region of T5-9 due to irritation of the gallbladder. These reflexes have been extensively studied and have now been mapped out for the entire spine. Some regions of note include T1-5 for the head and neck, T2-7 lungs, T5-9 gallbladder, and small intestine. Understanding how the viscero-somatic reflexes occur gives osteopathic providers a clue where to look for somatic dysfunctions based on the patient's symptoms.[3]

OMT involves multiple techniques to help treat symptoms and restore proper body functions. There are direct techniques such as muscle energy that require more physical force and active patient participation. Yet, there are also indirect techniques that are more gentle.

Technique choice should depend on both the provider's experience as well as the patient's demographics and clinical picture. Older patients or patients with more co-morbidities tend to respond better to indirect techniques. The overall goal of using OMT for patients is to allow the body to regulate itself, decrease pain, and improve joint mobility.[4]

Headaches are a common complaint that could benefit from OMT, specifically suboccipital release. Headaches are amongst the leading health problems in the world. The majority of headaches are primary, which include tension and migraine headaches. Tension-type headaches have been hypothesized to be due to compression of the greater occipital nerve. These types of headaches are best treated with NSAID medications.[5]

Migraines are also common headaches characterized by pulsating pain, which is unilateral and lasts up to three days. Migraines classicly are accompanied by nausea, light sensitivity, and noise sensitivity.[6] There has been extensive research regarding treatment options for headaches. Triptans are the first line for abortive treatment of migraines. Other medications such as amitriptyline, beta-blockers, and topiramate have been used to prevent migraines. Research has shown that non-pharmacologic therapies have reduced pain severity for patients. Therefore, OMT is another viable option for providers to allow for more individualized treatment plans.

Neck pain is also one of the most commonly treated conditions using OMT. Neck pain is often non-traumatic and non-specific. It is estimated that upwards of 70% of adults will experience neck pain in their lifetime. Neck pain can range from musculoskeletal strain and age-related structural changes in the spine to a symptom of a system-wide neurologic condition. Since most patients with neck pain are seen by primary care physicians, it is imperative to have multimodal treatment options. It has been recommended to try conservative treatments such as NSAIDs, heat, ice, and strengthening. Therefore, OMT allows for another non-invasive treatment option for patients with this complaint.[8]

The suboccipital release is a relatively easy technique for providers to use to help with musculoskeletal complaints such as neck pain and headaches. This technique is also versatile and can help regulate the autonomic system in the body due to manipulation of the occipital-atlanto region. This technique has been noted to regulate the parasympathetic system rather than the sympathetic system, which is targeted by the majority of osteopathic treatments. Studies have shown that this technique has improved the range of motion and balance in lower extremities of healthy and patients with pre-existing conditions due to the connection of the fascia along the entire body.[9]

Within this muscle group is the suboccipital triangle, consisting of rectus capitis posterior major, rectus capitis posterior minor, and obliquus capitis superior. This critical landmark contains both the vertebral artery and suboccipital nerve. The suboccipital nerve is what innervates these muscles. Superficial to the suboccipital triangle are the larger muscles that support the head and neck. These muscles include the sternocleidomastoid (SCM) and trapezius. The posterior portion of the SCM attaches to the lateral mastoid process and superior nuchal line.[11] The trapezius muscle originates from the base of the occiput and nuchal ligament and extends all the way to the spinous process of T12.[12]

When these muscles are compressed, this can cause compression of both the suboccipital nerve and the vertebral artery, causing decreased blood flow to that region. Subsequently, this can cause neck pain, headaches, and other symptoms. It has been noted that the "myodural bridge" connecting these muscles and the dura is a cause of cervicogenic headaches.[13]

A physician who has been trained and certified in osteopathic manipulative medicine.

Before performing a suboccipital release, the patient should have a neurologic and musculoskeletal exam of the neck and upper extremities. It is vital to ensure that the patient does not have contraindications such as the ones listed above.

Once it is determined that the patient does not have a contraindication for the procedure, have the patient lay supine, and the provider should sit on a stool at the head of the bed. The table should align so that the patient's head is around the level of the umbilicus of the provider. This allows for roughly a ninety-degree angle of the provider's arms to perform this technique with appropriate ergonomics.

To perform a suboccipital release, start with positioning the patient. The patient will need to be supine and flat. A pillow can be placed under the patient's head for comfort until starting the procedure.

Once the patient is comfortable and correctly positioned, the provider will sit at the head of the bed and place both hands underneath the patient's head in the occipital region. The provider should then feel for the occipital ridge along the scalp and move the hands slightly caudad until the muscle is felt.

The provider then flexes the fingers upward against the suboccipital muscles and holds this position for three to five minutes or until significant muscle tension is released. After the treatment, it is important to re-assess the patient's symptoms.

It is not uncommon to have some transient fatigue and persistent symptoms. However, most patients see an improvement in symptoms after undergoing this procedure.

The suboccipital release is generally an easy and safe technique to perform. Most common adverse reactions include headache, fatigue, and nausea. Less commonly, there are risks of worsening pain and nerve compression.[2]

Headaches, neck pain, and other musculoskeletal complaints are among the most common reasons for ED and office visits. First-line treatment typically includes NSAIDs, heat, ice, muscle relaxants, and other non-invasive procedures such as massage therapy and physical therapy.

Knowledge of OMT techniques, especially suboccipital release, gives providers another option for patients who need or want more than just medications for their ailments. This short and simple technique can help with patient comfort, treatment compliance, and overall quality of life for patients with both acute and chronic musculoskeletal complaints.

Most physicians have heard of OMT or work alongside many osteopathic physicians (D.O.s). However, many physicians do not know the utility of these treatments and the wide range of techniques available to trained providers.

Understanding this technique can show other providers the breadth of non-invasive treatment options for musculoskeletal complaints. In addition, in an outpatient setting, physicians and other providers will be able to help improve patients' quality of life and pain within a few minutes.

In an inpatient setting, an understanding of OMT gives the healthcare team more options for improving the patient's pain and discomfort and hopefully decreasing the length of hospital stay. With the information on OMT expanding in the medical community, many providers will and should have opportunities to learn these techniques and their underlying principles.


Contributed by Alexander Pozun, DO; Emily Rowlands, DO; Brad Carney, DO 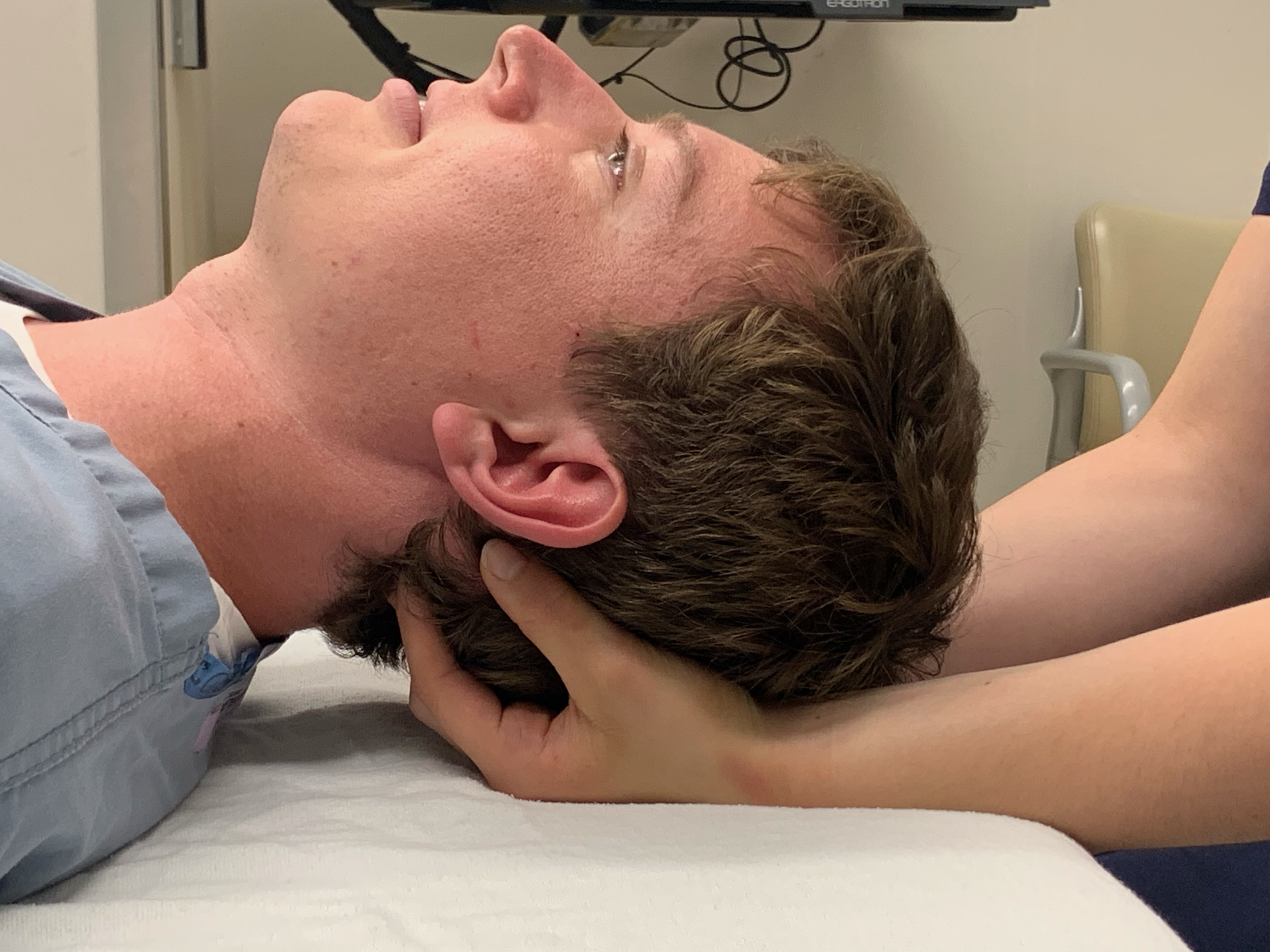 Kang HS,Kwon HW,Kim DG,Park KR,Hahm SC,Park JH, Effects of the Suboccipital Muscle Inhibition Technique on the Range of Motion of the Ankle Joint and Balance According to Its Application Duration: A Randomized Controlled Trial. Healthcare (Basel, Switzerland). 2021 May 29;     [PubMed PMID: 34072454]