Mega cisterna magna refers to a cystic posterior fossa malformation that is characterized by an enlarged cisterna magna, absence of hydrocephalus, and an intact cerebellar vermis. It must be differentiated from persistent Blake’s pouch cyst, posterior fossa cysts, Dandy-Walker variant, and posterior fossa neoplasia. The mega cisterna magna is hypothesized to develop embryologically from the permeabilization of Blake’s pouch. Mega cisterna magna is typically an incidental radiographic finding but may be associated with certain psychiatric conditions, and in smaller studies, patients have performed inferiorly on specific cognitive functioning, including memory, executive functioning, and verbal fluency. There is no specific treatment or necessary surgical intervention for patients with incidentally discovered mega cisterna magna. This review article summarizes the embryology and relevant anatomy and describes the radiographic appearance of the mega cisterna magna and how it can be differentiated from similar diagnoses; it provides a framework for members of the interprofessional team.

The concept of mega cisterna magna was first introduced in the 1960s by Gonsette; its size was initially described on ventriculography as above 15 mm in anterior-posterior length, 5 mm height, and 20 mm width.[3] The size has more recently been proposed as a cisterna magna that is greater than 10 mm on mid-sagittal images.[4]

Blake’s pouch is an inferior protrusion of the fourth ventricle, resulting from a finger-like expansion of the posterior membranous area.[5] During embryogenesis, Blake’s pouch is a transient structure that initially does not communicate with the surrounding subarachnoid space. It later becomes a permeable structure and constitutes the foramen of Magendie.[5]

The timing of when this permeabilization occurs has not yet been established with certainty. The mega cisterna magna is hypothesized to develop embryologically from the permeabilization of Blake’s pouch, allowing for the flow of CSF from the fourth ventricle inferiorly with the peri-medullary subarachnoid spaces and superiorly through the foramen of Magendie.[6]

Formation of the cisterna magna is completed within the leptomeninges at the end of the 7th  gestational week. Anatomically, the cisterna magna occupies the vallecula cerebelli, a depression between the medial aspect of the cerebellar tonsils and the inferior surface of the vermis.[6]

The exact incidence and prevalence of mega cisterna magna are not well known as it is most commonly an asymptomatic radiographic finding on cranial imaging obtained for a different indication.

In a series of 19,301 consecutive computed tomography (CT) or magnetic resonance imaging (MRI) scans obtained for headache or mild head trauma, a total of 49 cases were identified for an estimated prevalence of 2.5 per 1000.[7] There is not a significant gender predilection.[8]

In the adult patient, history should include inquiry about developmental milestones in the pediatric patient and any potential neurologic, psychiatric, or cognitive manifestations. Physical examination during the perinatal period should include a search for additional neurologic and systemic malformations, including headache, nausea/vomiting, paresthesias, weakness, ataxia, etc.

The focus of the neurologic examination will vary based on the patient's age, including tests of attention, motor, sensory, coordination, reflexes, and brainstem reflexes, and in older patients should include a mental status examination.

Perinatal evaluation should include a search for the additional central nervous system (CNS) and extra-CNS malformations. Mega cisterna magna was initially evaluated by ventriculography which is rarely employed. Mega cisterna magna may now be evaluated with ultrasonography in the fetus or newborn before fontanelle closure.

Following fontanelle closure, the mega cisterna magna is best evaluated by computed tomography (CT) with magnetic resonance imaging (MRI) brain with and without contrast as the gold standard to rule out similar appearing pathologies. Radiographically, the mega cisterna magna appears as a prominent retrocerebellar CSF appearing space measuring greater than 10 mm on mid-sagittal images with a normal cerebellar vermis and ventricular caliber.[4]

It is critical to exclude ventriculomegaly and cerebellar hypoplasia before diagnosing mega cisterna magna. Additionally, there should be a lack of associated enhancement. Clinically, a neuropsychiatric evaluation could be considered if there is any clinical concern.

No specific treatment is necessary for patients with incidentally discovered mega cisterna magna. Medications may treat associated signs/symptoms that may or may not be directly related to the mega cisterna magna, including headache, seizure, or psychiatric illness.

There is no clear established follow-up timeline for patients with mega cisterna magna. It is probably reasonable to follow patients into adolescence and early adulthood as manifestations, if present, may not initially present in early childhood. There are no clear follow-up guidelines for adults with incidentally discovered mega cisterna magna.

It is likely reasonable in an asymptomatic adult with an incidentally discovered cisterna magna on a high-resolution image, such as an MRI of the brain, to follow up on an as-needed basis with repeat imaging obtained if new symptoms were to develop.

Persistent Blake's pouch cyst: During embryogenesis, Blake's pouch is an inferior protrusion of the fourth ventricle. Blake's pouch results from a finger-like expansion of the posterior membranous area. It initially does not communicate with the subarachnoid space but later becomes a permeable structure and then constitutes the foramen of Magendia.[5]

Dandy-Walker variant: Dandy-Walker variant is usually an isolated malformation but can also occur in association with many other conditions, including Aicardi syndrome, Meckel-Gruber syndrome, Walker Warburg syndrome, and chromosomal abnormalities such as trisomy 9, 13, and 18, among others.

The key distinguishing feature of the Dandy-Walker variant radiographically is a hypoplasia of the cerebellar vermis, which rarely may be completely absent.[5] In contrast, hypoplasia of the cerebellar vermis is not characteristic of mega cisterna magna. Similar to in mega cisterna magna, hydrocephalus is not a common finding in the Dandy-Walker variant unless associated with an additional abnormality.

Epidermoid cyst: Epidermoid cysts are slow-growing congenital tumors that develop from remnants of epidermal elements during the closure of the neural tube and disjunction of the surface ectoderm with neural ectoderm.[9]

Studies on outcomes in patients with mega cisterna magna are limited and conflicting. In an older study identifying 14 cases of isolated mega cisterna magna out of 1,260 reviewed CT scans, long-standing neurologic dysfunction was reported in 57% of patients (8/14).[13]

The high frequency in this study may be due to the use of CT imaging, which has poor posterior fossa resolution and may have missed an associated malformation resulting in misdiagnosis. In a later study, 15 fetuses reviewed sonographically were found to have isolated mega cisterna magna.[14] In all 15 cases, the fetuses were found to be phenotypically normal without evidence of neurologic disorder. There was no reported evidence of neurologic disorder or developmental delay on available follow-up spanning up to 69 months for 8 of the patients.[14]

These results may also be of limited value as cognitive and behavioral disorders may be difficult to assess during childhood accurately and may become more apparent with age.

In a recent meta-analysis including 144 fetuses with mega cisterna magna, the rates of the additional central nervous system (CNS) and extra-CNS anomalies were 12.6% and 16.6%, respectively, without any identifiable chromosome abnormality.[15]

There have been reported psychiatric associations between mega cisterna magna, including mania, bipolar disorder, schizophrenia, and catatonia.[17][18][19]

The exact incidence and prevalence of mega cisterna magna are unknown, but in available studies, it is rare, reported at less than 1%. Clinical manifestations are conflicting but appear more favorable in recent studies with a lower incidence of neurologic manifestations.[14]

There is no specific treatment or surgical intervention that is usually needed or provides benefit in mega cisterna magna.

Healthcare professionals should be aware that in the vast majority of cases, the mega cisterna magna is an incidental radiographic finding with little if any clinical significance that does not require long-term follow-up. In most cases, it is considered a normal radiographic variant. It can, however, be associated with other neurologic or systemic anomalies, albeit rarely. All interprofessional team members, including clinicians (MDs, DOs, NPS, and PAs), and nursing staff, need to engage in open communication, collaborative action, and accurate record-keeping and information sharing to optimize patient outputs.

Appropriate evaluation, including magnetic resonance imaging (MRI) of the brain with and without contrast, should be obtained to rule out other etiologies. For mega cisterna magna, there is no indicated specific treatment or surgical intervention. 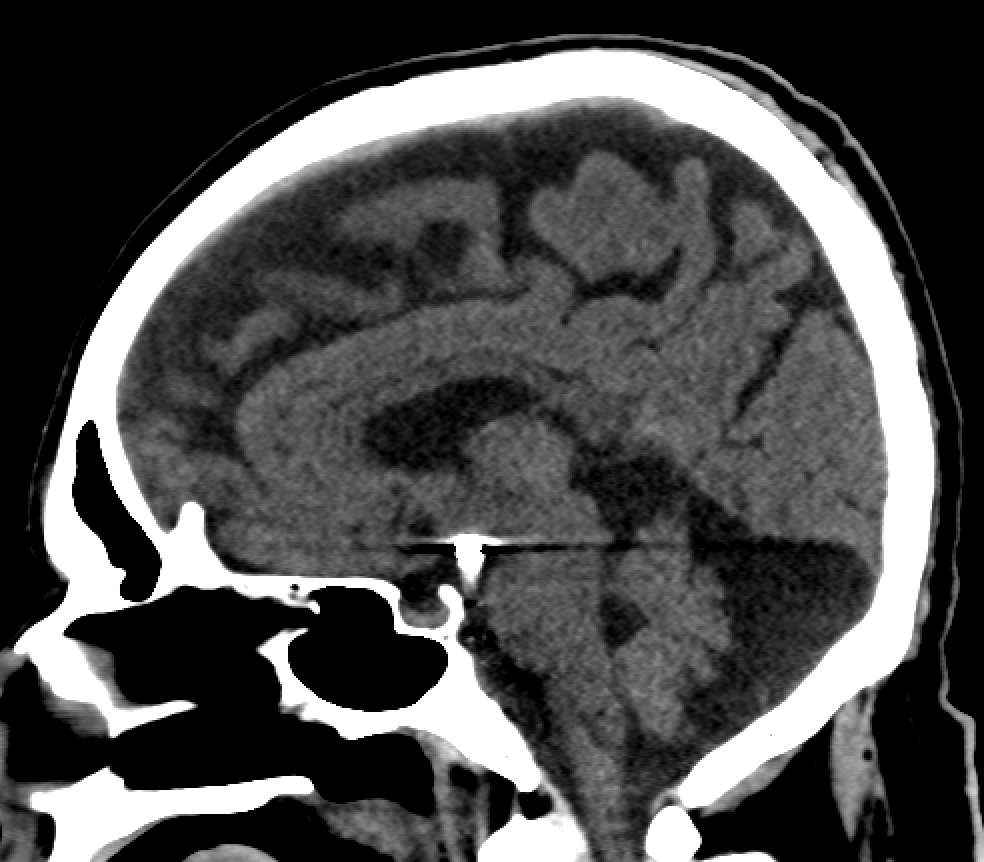