Aspiration of gastric contents is a common cause of perioperative morbidity and mortality. Aspiration can lead to hypoxia, bronchospasm, pneumonitis, pneumonia, acute respiratory distress syndrome, and death. Aspiration pneumonia among surgical patients is associated with a 4.0-fold increased risk of intensive care admission, a 9-day increase in length of stay, and a 7.6-fold increased risk of in-hospital mortality.[1] The presence of food or liquids in the stomach before the induction of anesthesia is one of the greatest risk factors for perioperative pulmonary aspiration.[2][3][4]

The risk of gastric aspiration can be reduced by fasting before planned procedures. The American Society for Anesthesiologists Practice Guidelines for Preoperative Fasting is intended to reduce gastric aspiration risk. These guidelines recommend that healthy patients fast for a minimum of 2 hours for clear liquids; 4 hours for human breastmilk; 6 hours for non-human breastmilk, infant formula, or light meals; and 8 hours for fried foods, fatty foods, and meat.[5][6]

No clear guidance on appropriate fasting periods is provided for patients at increased risk of delayed gastric emptying or pulmonary aspiration, such as those with diabetes mellitus, gastroesophageal reflux disease, morbid obesity pregnancy, or recent opioid use. Providers also face the challenge of unclear NPO status, as seen in poor historians, patients with dementia, language barriers, and non-compliant patients.[7][8][9]

Gastric ultrasound is a simple, fast, non-invasive bedside diagnostic test that provides a qualitative and quantitative assessment of gastric contents.[10][2] The use of gastric ultrasound allows anesthesia providers to differentiate between the full and empty stomach, determine the consistency of gastric contents (solids, thick liquids, clear liquids), and estimate the volume of gastric fluids. This information is used to determine the most appropriate timing for elective procedures, anesthetic choice, and airway management approach.[11]

The stomach wall consists of three layers of alternating echogenicity, which can frequently be distinguished on ultrasound. The outermost layer is the serosa, which appears as a thin hyperechoic line. The muscularis propria, immediately deep to the serosa, appears as a thick, hypoechoic line and is easy to see on an ultrasound. The mucosa is the innermost layer of the stomach, which appears as a thin hyperechoic line. Occasionally, five layers of alternating echogenicity can be appreciated. The two innermost are thought to be artifactual due to the interface between the mucosal layer and fluid in the gastric lumen.[13]

Gastric ultrasound is performed in the parasagittal imaging plane; thus, it is crucial to understand the relationship of adjacent organs to the stomach when viewed in this plane. The liver is easy to recognize due to its large size and highly vascular appearance. It should be located on the left of the screen (cephalad). The pancreas is located deep to the stomach and has a hyperechoic appearance. The bowel is difficult to visualize on ultrasound due to the presence of gas in the lumen but is generally located on the right side of the screen (caudad to the stomach).[14]

During the gastric ultrasound, several major blood vessels can be seen, including the aorta, the superior mesenteric artery (SMA), and the inferior vena cava (IVC). All appear anechoic (black) because they are filled with blood. The pulsatile SMA is the most superficial, located deep to the stomach but superficial to the aorta. The aorta and IVC can be challenging to distinguish, as both are large and located at similar depths. Only one should be visible in the parasagittal plane at a time because they run parallel to each other. The aorta has a thick wall, is pulsatile, and usually has a smaller diameter than the IVC. The IVC has a thin wall, if often compressible, and the diameter changes with the respiratory cycle, decreasing with inspiration and increasing during expiration. The aorta is seen anterior to the vertebral bodies and left of midline, while the IVC is at a similar depth but to the right of the midline.[5]

Information obtained from gastric ultrasound is used by anesthesia providers to determine if elective surgical cases should be postponed and to select the optimal induction and airway management technique for urgent or emergent procedures.[16]

There are no absolute contraindications to gastric ultrasound.

Gastric ultrasound is relatively contraindicated in patients with abdominal wounds, epigastric bandages, and those who cannot be safely positioned in the right lateral decubitus position (RLD).

Virtually any diagnostic ultrasound machine can be used to perform a gastric ultrasound. Ideally, the machine should have the ability to measure the cross-sectional area (CSA). Abdominal imaging settings should be selected, if available. An appropriate imaging depth should be chosen to allow visualization of the abdominal aorta.

A low frequency (2 to 5 MHz) curved array probe is suitable for most patients. A higher frequency (5 to 13 MHz) linear probe may be suitable in small children, though care should be taken to ensure penetration is sufficient to allow imaging of the abdominal aorta.

Gastric ultrasound can be performed and interpreted by a single, qualified clinician. However, additional help may be required to properly position small children or patients who are uncooperative, immobile, or sedated.

With the patient in the supine position, expose the epigastrium. Position the cephalad tip of the probe immediately below the xiphoid process. Confirm correct probe orientation after identifying the liver on the screen. Locate the great vessels (inferior vena cava or abdominal aorta) and adjust the image depth so that the posterior vessel border or vertebral bodies are visible at the bottom of the screen. Required depth varies significantly depending on the patient body habitus.

Scan the abdomen by sweeping the probe laterally, from left to right, keeping the probe perpendicular to the skin. Identify the stomach, liver, pancreas, superior mesenteric artery, aorta, and inferior vena cava. Examine and stomach and observe the characteristics of any stomach contents, noting the presence of solids, thick liquids, or clear fluids.[5]

After completing the exam in the supine position, place the patient in the right RLD position. This position facilitates the gravitational flow of stomach contents to the antrum, which increases the sensitivity of gastric ultrasound and facilitates gastric volume measurement.

With the patient in the RLD position, scan the abdomen, identifying the anatomic structures previously discussed. Occasionally, image depth must be increased to obtain adequate views of the great vessels of the abdomen.

Examine the contents of the stomach, again noting thick liquids or solids.[17][18]

If the stomach contains only clear liquids, the volume can be estimated by measuring the CSA of the antrum at the level of the aorta. Care is necessary to ensure that measurements are taken at the aorta level rather than the IVC. Due to the funnel shape of the antrum, measurements at the level of the IVC will underestimate gastric volume, leading to false negatives.[19]

Gastric volumes <1.5 ml/kg are considered normal (consistent with baseline secretions), associated with a low risk of aspiration under anesthesia.[20] Volumes greater than 1.5 ml/kg are treated as positive findings. For the example patient above, the volume of gastric contents is 293/80 = 3.7 ml/kg, signifying a full stomach.

In the perioperative arena, the clinical significance of gastric ultrasound depends on the urgency of surgery. For elective procedures, cases should be canceled or postponed if the stomach contains solids, thick liquids, or a volume of clear fluids exceeding 1.5 ml/kg.[20]

In emergency procedures or those in which gastric emptying is unpredictable or may not improve with time (e.g., gastroparesis), the risk of aspiration and optimal timing of the case should be discussed with the patient and proceduralist. The anesthetic plan should include full aspiration precautions if the case must proceed. The patient should receive no sedation to preserve airway protective reflexes, or if sedation must be used, the airway should be protected with a rapid sequence induction and endotracheal intubation. Depending on the circumstances, the stomach should be decompressed with a nasogastric or oral gastric tube either before induction of anesthesia or following intubation.[10]

Gastric ultrasound is a useful diagnostic exam because it can reduce the risk of pulmonary aspiration of gastric contents. However, risk reduction requires effective communication and collaboration between all clinical members of each patient's care team. Surgical schedulers must ensure that patients receive instructions regarding appropriate fasting before surgery. On the day of a procedure, preoperative nurses should assess fasting status during the preoperative interview.

For surgical inpatients, the responsible provider (nurse practitioner, physician assistant, or physician) should ensure appropriate diet orders are placed the evening before a scheduled surgery. The anesthesiologist or nurse anesthetist is ultimately responsible for performing the final assessment and determining the most appropriate method for reducing the risk of aspiration. However, gastric ultrasound can be performed and interpreted by any qualified clinician. 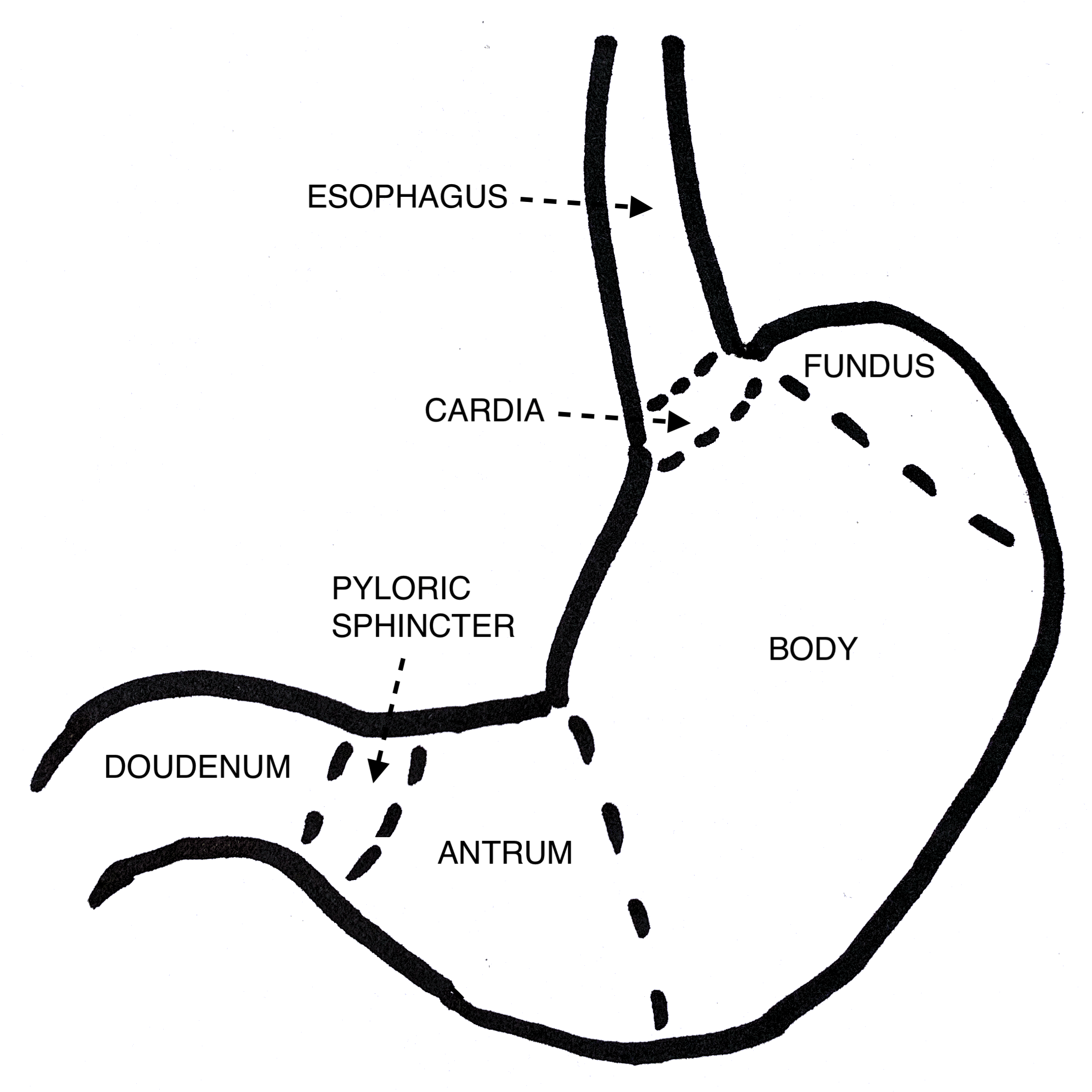 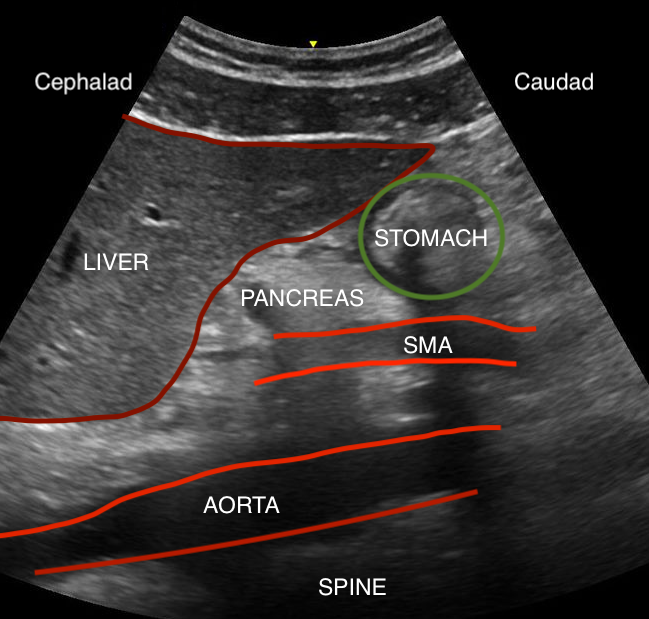 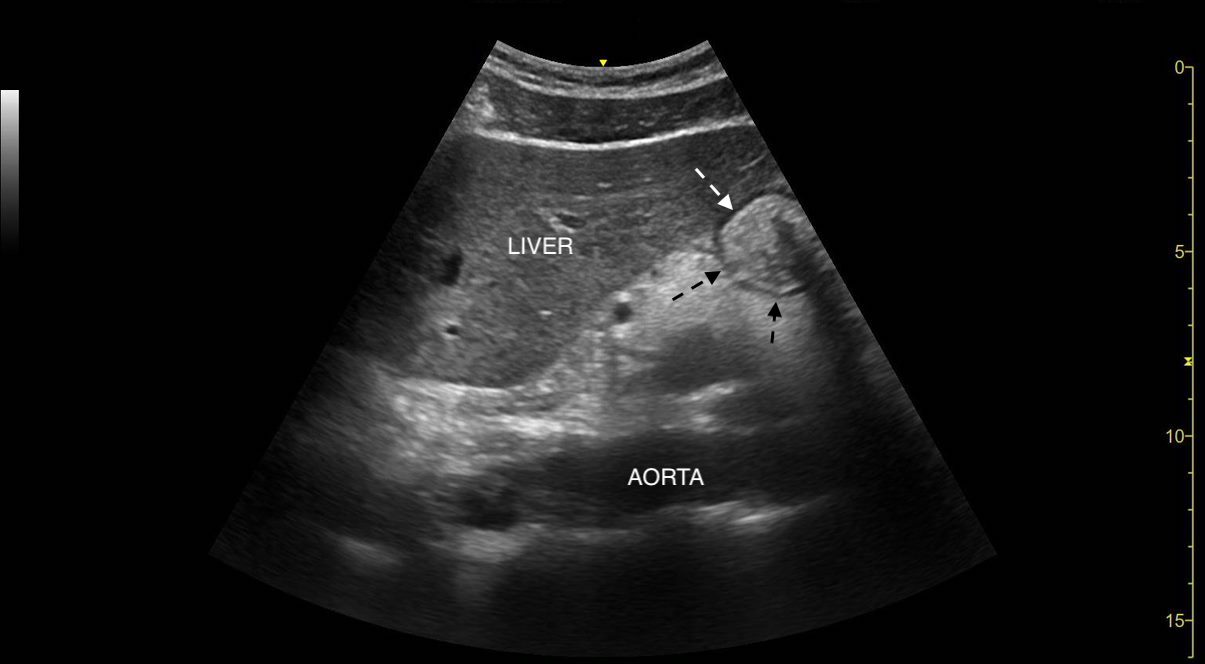 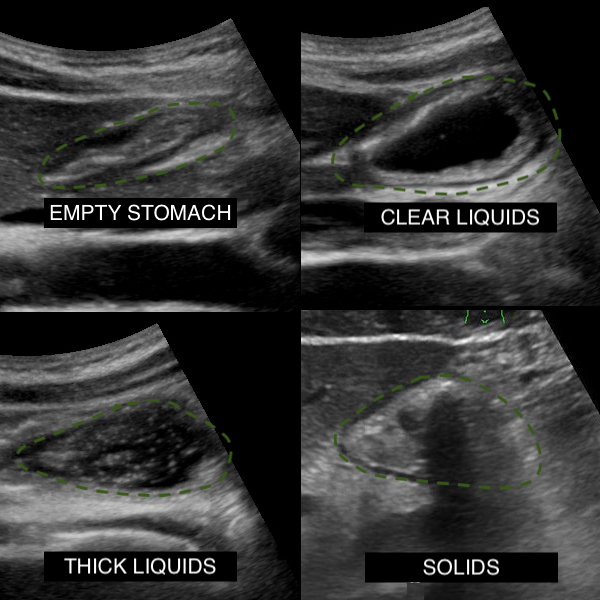 Lim JH,Jeong YM, Sonography of the stomach: an in vitro study to determine the anatomic cause of inner hyperechoic and hypoechoic layers of the gastric wall. AJR. American journal of roentgenology. 1994 Feb;     [PubMed PMID: 8310921]