Congenital pseudarthrosis of the tibia is a rare dysplastic pathological condition of the lower limbs leading to significant disability. The etiology of this condition is not clear, but an association has been seen with neurofibromatosis type 1. It may be seen at birth or manifest at the walking age with pathological fractures leading to deformity and limb length discrepancy. The treatment of this condition is mainly surgical, with various options aimed at achieving bone union, correcting limb deformity, and restoring limb length. This activity reviews the evaluation and management of congenital pseudarthrosis of the tibia and highlights the role of the interprofessional team in evaluating and managing patients with this condition.

Paget gave the first description of congenital pseudarthrosis of the tibia (CPT) in 1891; it is characterized as a non-union of a tibial diaphyseal fracture that either develops spontaneously or after a history of trivial trauma in a previously dysplastic segment of the bone. It is associated with an increased tendency to re-fracture.[1][2] It is usually considered one of the most commonly observed types of congenital pseudarthrosis. Anterolateral bowing, failure of the process of tubulation in early life, and cystic pre-fracture are a few of the common predisposing conditions associated with CPT.[3]

The etiology of CPT remains controversial, and it revolves mainly around the decreased osteogenic capability of the pseudoarthrosis tissue. Around 38 to 90% of such cases are correlated with neurofibromatosis. A multimodality approach including genetic counseling is needed to screen for neurofibromatosis in all patients diagnosed with CPT.[4]

In 60 to 90% of the patients with CPT, fibular abnormalities are present. Various types of classification systems have been suggested to cover the wide spectrum of this condition. Multiple treatment options are available for this disease, including both operative and non-operative options based on the severity of the condition.[5]

The exact etiology of this condition is not clear, although multiple theories have been mentioned in the literature, including

The pathophysiology of the disease shows increased osteoclastic activity due to signal abnormalities or decreased osteogenic potential of the bone due to defects in local vascularization of the bone. The disease can be genetic, as in the case of association with NF-1, or can be due to fibrous hamartoma and pathological periosteum.

Normally, NF-1 codes for Neurofibromin, a protein that negatively regulates Ras protein by inactivating Ras-GTP to Ras-GDP. Ras protein controls cell differentiation and cell proliferation. In cases of CPT associated with neurofibromatosis, NF-1 gene mutation occurs, leading to loss of neurofibromin activity, which causes maintenance of Ras-GTP, which is the active form of Ras and Ras-MAPK pathway defect leading to defective differentiation of osteoblasts. Also, osteoclastic activity increases due to overexpression of the Ras pathway, resulting in bone resorption.

In some cases of CPT, the pseudarthrosis tissue shows double activation of the NF-1 gene. In other cases of CPT, the diseased tibia bone shows insufficiency in osteogenesis and mechanical strength.[4] The bony cortex is encroached by the abnormal growing cellular and fibrovascular tissue, which promotes incoordinate osteoclastic resorption of bone with the abnormal bone modeling process. This results in the formation of the fibrous hamartoma and pathological periosteum, which exerts a mechanical effect of interposition and thus prevents union and causes defective bone vascularization.

Simultaneously, reactive changes lead to medullary sclerosis with excess trabecular bone deposition in the medullary aspect.[8] Intracortical cysts result from excess resorption of the bone. The decreased osteogenetic potential results from the impaired vascularization of the bone.[9]

The pseudoarthrosis-bone junction is characterized by the presence of giant osteoclasts. The bone adjacent to the pseudoarthrosis has an hourglass appearance with atrophy of the bone ends. All these changes signify bone remodeling defects.[8]

In mixed-type CPT, cystic intracortical lesions resulting from excess bone resorption, deformity of the bone, and sclerosis are present.[10]

Usually, the disease is unilateral. Primary pseudoarthrosis or neonatal form of congenital pseudarthrosis of the tibia is seen at birth or within the first few weeks of life. It presents as limb deformity characterized by the anterolateral bowing of the tibia or as discontinuity between the two bones within the tibial segment. Secondary pseudoarthrosis is characterized by pathological fractures which occur when the child starts walking. The disease can manifest as simple bowing of the tibia, extensive bone deformities with bowing in one or both the bones of the leg, to pathological fractures and pseudoarthrosis. Leg shortening is also seen due to tibial bowing and decreased tibial growth.[11][12]

A complete dermatological and neurological examination is also done in cases associated with NF-1, which is an autosomal dominant, multisystemic neurocutaneous disease.[5]

Standard roentgenogram should be advised as the primary investigation, which can show anterolateral bowing, heterogeneous lesions, resorption of bone at the ends of the fracture responsible for significant loss of bone substance.[11]

In cystic forms bowing appears before the first year, the medullary canal is narrow, and deformity gradually worsens, ultimately resulting in transverse fracture. In dysplastic forms bowing can be seen since birth, narrow tibia with an hourglass appearance, and partially or completely obstructed medullary cavity.

The fibula is commonly affected in such forms. Once pseudoarthrosis has been developed, bony ends become either thin, atrophic, or wide, hypertrophic. These several radiological findings pave a path for various criteria, which serve as the basis for various classifications of congenital pseudarthrosis of the tibia. The role of magnetic resonance imaging (MRI) has recently emerged as it helps provide a more detailed analysis of soft tissue lesions, mainly the periosteum, which lies in the vicinity of pseudarthrosis.[12]

Bone perfusion sequences in MRI can help visualize the vascularization defects in the bone, which ultimately helps in finalizing the limits of resection preoperatively. It also serves a significant role in understanding the pathophysiological mechanisms of this condition.[13]

The management of congenital pseudarthrosis of the tibia is mainly surgical as with the progression of time, and it leads to more worsening, shortening, and deformity of the condition. The role of prophylactic bracing in a child who has just started walking can help delay or limit the deformity associated with this condition. The goal of surgical management is restricted to achieving the union in cases of CPT and includes restoring the limb's satisfactory alignment and correcting the limb length discrepancies while preserving the normal articular function. Various surgical techniques described in the literature include intramedullary nailing along with a bone graft, Ilizarov technique, and vascularized fibular transfer.

Intramedullary Nailing Along With a Bone Graft

This concept was first described in the literature by Charnley in 1956. It is based on the principle of resection of pseudarthrosis and fixation with an intramedullary implant supported by a large bone graft which results in limb alignment, deformity correction and guides the lengthening of bone during the growth phase. Various types of intramedullary fixation devices are available. One of the recent fixation devices is a telescopic nail.[14]

This technique works on the principle of direct compression of the pseudarthrosis area with or without its resection along with or without bone graft. High rates of the union are seen when resection of pseudoarthrosis was performed at the initial stage. This method has the advantage of correcting deformity postoperatively and bone transport for any limb length discrepancies.[15][16]

This procedure was initially described by Judet and Gilbert in 1978 for the treatment of CPT. It is based on the principle of dystrophic tibia resection, which is substituted by vascularized healthy bone.[17] Later on, in response to mechanical stimulation, hypertrophy of the transferred bone is observed. The contralateral fibula is used classically for this procedure, although an ipsilateral fibula can also be used.[18][19]

Recent advances in the management of congenital pseudarthrosis of the tibia include the use of bone morphogenic proteins, induced membrane and spongy autologous grafts, periosteal grafts, and electrostimulation.[20]

The common differential diagnoses of congenital pseudarthrosis of the tibia include the following:

Various classification systems described in the literature for this condition show its heterogenic nature.

One of the most commonly used is the Crawford classification which describes as follows:

The prognostic factors associated with poor prognosis include significant limb length discrepancy, atrophy of the bone ends, narrow medullary canal with extensive sclerosis, and involvement of the fibular bone and tibial bowing.[1][11]

The common complications associated with this condition include recurrent fractures, limb length discrepancies, valgus deformity of the ankle, tibiotarsal instability, and ankle stiffness.[12]

Patients with congenital pseudarthrosis of the tibia should be promptly evaluated and adequately treated, as it can lead to significant long-term disability when neglected. Due to tibial bowing and decreased tibial growth, the disease can cause extensive bone deformities with pathological fractures and leg shortening. The various surgical options strive to achieve bone union, correct bone deformity, and restore the limb length. Also, interprofessional management is often necessary due to the association of this disease with neurofibromatosis type 1.

The management of congenital pseudarthrosis of the tibia is surgical, aimed at achieving bone union, correcting limb length discrepancy, and maintaining the limb alignment during growth. Consultation with a pediatrician is required to evaluate the other manifestations of neurofibromatosis type 1, which is often associated with this disease. Also, dermatology referral is necessary for the evaluation of skin manifestations.

The role of physical therapy and rehabilitation cannot be understated in getting the best functional outcomes; hence physiotherapists should be informed about the rehab protocol after each case. Interprofessional healthcare teamwork with open communication and collaborative action are crucial to successful patient outcomes. [Level 5] 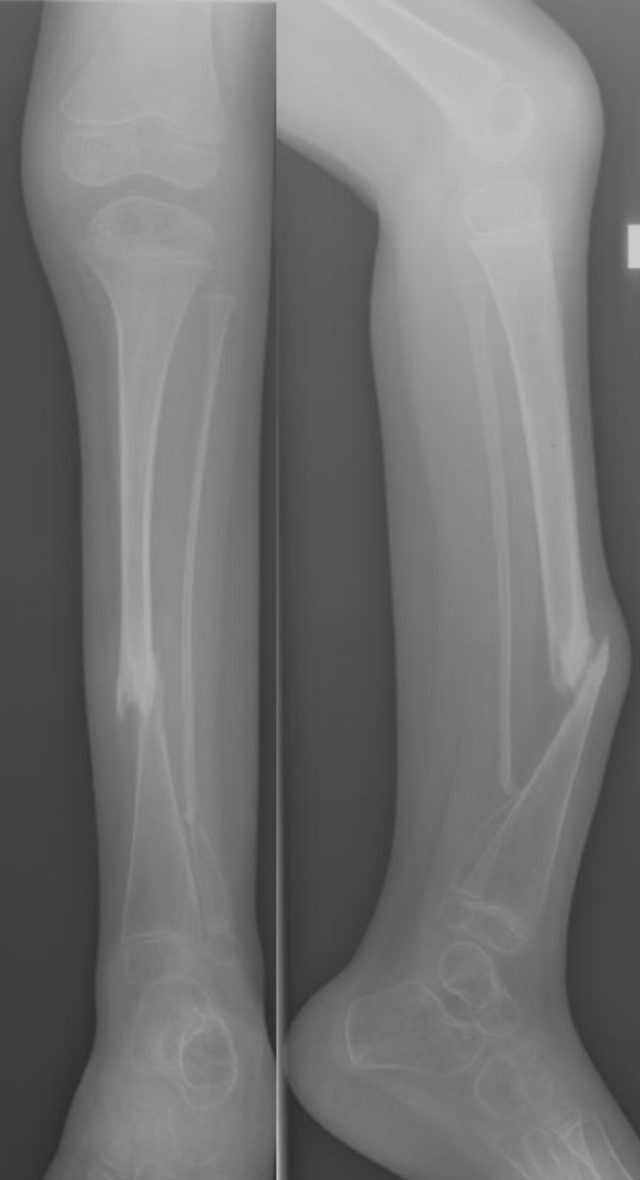 Liu Y,Yang G,Zhu G,Tan Q,Wu J,Liu K,Tang J,Mei H, Application of the "telescopic rod" in a combined surgical technique for the treatment of congenital pseudarthrosis of the tibia in children. Journal of orthopaedic surgery and research. 2021 Aug 26     [PubMed PMID: 34446041]

El-Rosasy MA, Congenital pseudarthrosis of the tibia: the outcome of a pathology-oriented classification system and treatment protocol. Journal of pediatric orthopedics. Part B. 2020 Jul     [PubMed PMID: 31503102]

Khan T,Joseph B, Controversies in the management of congenital pseudarthrosis of the tibia and fibula. The bone & joint journal. 2013 Aug     [PubMed PMID: 23908415]

Dobbs MB,Rich MM,Gordon JE,Szymanski DA,Schoenecker PL, Use of an intramedullary rod for treatment of congenital pseudarthrosis of the tibia. A long-term follow-up study. The Journal of bone and joint surgery. American volume. 2004 Jun;     [PubMed PMID: 15173291]

Sakamoto A,Yoshida T,Uchida Y,Kojima T,Kubota H,Iwamoto Y, Long-term follow-up on the use of vascularized fibular graft for the treatment of congenital pseudarthrosis of the tibia. Journal of orthopaedic surgery and research. 2008 Mar 6;     [PubMed PMID: 18325091]