Metatarsal fractures are one of the most common foot injuries encountered in trauma and emergency. They usually occur as a result of direct trauma to the forefoot. The common presentation involves foot pain and swelling with difficulty in ambulating without support. The treatment involves conservative management in the form of cast or operative treatment in selected cases. This activity reviews the evaluation and management of metatarsal fractures and highlights the role of the interprofessional team in evaluating and managing patients with this condition.

Metatarsal fractures are relatively common injuries of the foot. The main goal of treatment is to restore the alignment of all metatarsals, hence maintaining the arches of the forefoot and thereby resulting in the distribution of a normal weight under the head of metatarsals. If properly managed, these injuries are easy to treat and have a favorable prognosis.[1][2][3] On the other hand, these injuries may also result in prolonged disability in scenarios of malunion or non-union. Metatarsalgia is one of the common sequelae in cases with failure in achieving the ascertained goal of management.[4]

The most common etiology for metatarsal fractures is either direct or indirect trauma. Such injuries may vary from a simple isolated metatarsal fracture to crush injuries involving multiple fractures and drastic soft tissue compromise.[4] Direct trauma can occur due to the fall of heavy objects on the foot and is usually seen in industrial workers. Indirect trauma occurs when there is a twisting movement of the hindfoot and leg while the forefoot is fixed. Supination injuries to the foot may result in avulsion fractures of the fifth metatarsal base because of the tension generated over the peroneus brevis tendon and the lateral cord of plantar aponeurosis.[1][5][6][7]

The Lisfranc joint complex consists of the tarsometatar­sal joints. The Lisfranc fracture-dislocation can result due to falling from height or stairs. The common mechanisms of injury are either longitudinal compression of the foot or rotation around a fixed forefoot. In the former mechanism, the metatarsal head remains fixed while body weight lies over the hindfoot, especially against the base of metatarsals.[7]

The other variety of fractures that are commonly seen in metatarsal bones is stress fractures which result from a small amount of repetitive force and are commonly associated with ballet dancers, athletes and soldiers, hence termed “march fracture.”[4][8] Multiple risk factors associated with stress fractures include hyper load syndrome, Morton’s foot, anorexia nervosa, amenorrhea, and prolonged hypoestrogenism.[4][7]

Insufficiency fractures can also be seen in metatarsal bones, which occur due to normal stress loading over a weakened bone. Such injuries are usually seen in osteoporosis patients and postmenopausal women.[7]

Patients with such injuries usually complain about difficulty in bearing weight or excruciating pain on ambulation. Proper history taking in such patients regarding suggestive mechanisms of injury is essential. Clinically, there is tenderness, crepitus, bruising, deformity, and swelling over the forefoot. Gross deformities are usually seen only with complex injuries, which include multiple fractures and dislocations.[4]

Sometimes it is hard to differentiate soft tissue injury and fracture of the base of the fifth metatarsal because the pain and swelling for both injuries lie just inferior to the lateral malleolus. Hence thorough examination and proper evaluation are needed in cases of metatarsal injuries.[7]

The radiographic evaluation consists of standard views of the foot, including anteroposterior, 45 degrees oblique, and lateral projection. To diagnose metatarsal overload, additional weight-bearing roentgenograms, including the lateral view of the foot and tangential view of metatarsal heads, are helpful. Acute stress fractures are usually not detected with a standard X-ray. To confirm the diagnosis of stress fractures, the x-rays can be repeated after 10 to 14 days of the onset of symptoms. A radiolucent resorption gap can be seen around the fracture, which confirms the diagnosis.[4][11][12]

Alternatively, MRI and Technetium scans can be ordered as they have a high sensitivity in detecting such fractures. In scenarios of multiple fractures of the base of metatarsals, computed tomography is advised to rule out the possibility of Lisfranc fracture-dislocation.[4] Stress X-rays which include passive adduction and abduction of the forefoot, can be performed under local anesthesia to reveal ligamentous instability at the Lisfranc joint. While interpreting roentgenograms, anatomical variants such as the os vesalianum (within the peroneus brevis tendon), the os peroneum (within the peroneus longus tendon), the os cuneometatarsale, and the os intermetatarseum have to be kept in mind along with the apophysis at the fifth metatarsal base which is visible between 11 and 14 years in boys and 9 and 11 years in girls.[5]

Conservative management can be offered to undisplaced metatarsal fractures, including stress fractures which include adhesive strapping, short leg walking cast for 4 to 6 weeks, or a non-weight-bearing cast for 3 weeks followed by a walking cast for another 3 weeks, except in professional athletes to avoid long duration of immobilization. In second to fourth metatarsal fractures, which are displaced only in the frontal plane without shortening, can also be managed nonoperatively.[13][14] The first and fifth metatarsal fractures which are displaced in the horizontal plane should be managed operatively to avoid secondary deformities like posttraumatic hallux valgus and digitus quintus varus.[4]

Metatarsal fractures displaced in the sagittal plane may result in painful callosities, metatarsalgia, and neuroma formation; hence need to be managed operatively.[4] Shereff suggests the reduction of any metatarsal fracture with angulation of more than 10 degrees and displacement of more than 3 to 4 mm. Lisfranc joint complex fractures, if displaced more than 2 mm and involving more than 30% of the joint, need to be managed operatively with open reduction and internal fixation.[15]

The first metatarsal plays an important role in maintaining the balance of the foot as the majority of weight passed through it compared to the other metatarsals.  Any disruption of it may result in a dysfunctional foot. As there is a lack of ligamentous support between the first and adjacent metatarsals, the chances of displacement are high. Fractures that show instability and significant displacement warrant operative intervention.[16]

First metatarsal fractures are difficult to keep reduced after closed reduction because of the pull of the intrinsic and extrinsic muscles and hence commonly require internal fixation. In the shaft of the first metatarsal fractures, stable fixation can be obtained with the help of two crossed K-wires of 1.8-2 mm diameter. The comminuted fractures can be managed with plates that should be placed over the medial-plantar aspect because of the minimum soft tissue cover on the dorsal aspect.[4]

First, metatarsal fractures that involve the metatarsophalangeal and the tarsometatarsal joint should be reconstructed anatomically to avoid posttraumatic arthritis. To avoid deformities such as hallux valgus or varus, the anatomical reduction must be obtained in the transverse (horizontal) plane.[4]

The second metatarsal is more stabilized compared to the other central metatarsals due to the presence of the Lisfranc ligament, which runs between the second metatarsal base and the medial cuneiform. The rest of the central metatarsal bases are aligned together with the help of multiple strong ligamentous structures which lies on both plantar and dorsal aspect. Because of the stable proximal articulations and strong soft tissue support, there is minimum movement permitted, resulting in a high level of intrinsic stability. In cases of severe traumatic injuries, if displacement occurs, these central metatarsals will tend to displace as a single unit.[16][17]

The goal of management is to restore the length in the sagittal plane, while dislocation in the transverse plane can be tolerated to some extent. The management of choice for simple fractures is retrograde percutaneous pinning.[4][17] K-wires are inserted distally through the metatarsal head under fluoroscopic guidance. While doing so, plantarflexion of the distal fragment and dorsiflexion of the adjacent toe helps in achieving the reduction.

The pros of the percutaneous pinning technique include the ability to preserve the vascularity of fractured bone with negligible disruption of the soft tissue envelope. In scenarios where closed manipulation failed to provide the desired outcome, open procedures using minimally invasive options need to be performed, which will help achieve the reduction by providing direct visualization of fractured ends with minimum soft tissue dissection. Comminuted fractures can be managed using mini-fragment plates. Metatarsalgia can be commonly seen in central metatarsal fractures managed conservatively due to malunion and parabola disruption.[16]

Fractures of the shaft should be managed operatively because conservative management usually results in displacement due to loose ligamentous connections to the fourth metatarsal. Undisplaced Jones fracture shows delayed fracture healing due to the poor blood supply and instability.[18] In acute scenarios, they can be managed with restricted weight-bearing and immobilization for 6 to 8 weeks. Operative management should be considered in scenarios of professional athletes or cases of delayed fracture healing beyond ten weeks.[19]

Nowadays, the trend is being shifted towards operative management, incorporating the benefits like early mobilization, high chances of union, and better functional outcomes. One of the common forms of operative management is intramedullary screw fixation. As cannulated screws are easy to insert hence, they are commonly used. Various studies proved the superiority of solid screw over the cannulated screw concerning its strength.[20]

Other operative treatment options include tension band wiring, percutaneous pinning, and external fixation. Avulsion fractures that involve a small portion of the tuberosity can be managed by excision. In scenarios where fractures showing displacement more than 2mm and involving more than 30% of the joint should be managed by the operative intervention.[16]

When considering the management of the proximal shaft fractures, we need to differentiate among non-union, delayed union, stress fractures, and acute traumatic injuries.[21] All of these entities will present with almost similar clinical features.[22] To make a diagnosis, one must consider a history of trauma, sclerosis of the medullary canal, width of the fracture gap, and the periosteal reaction at the fracture site. Conservative management can be offered to patients who are being diagnosed with acute stress fractures.[21][23][24]

In patients where the diagnosis of delayed healing has been made, intramedullary fixation using screws along with bone grafting can be offered.[21][24][25] In scenarios where a nonunion is the diagnosis, further management can be decided based on the periosteal reaction.[4]

If on roentgenogram features of periosteal reaction are present such patients can be managed by either intramedullary fixation using a screw or extramedullary fixation using mini fragment plates. If roentgenogram suggests sclerosis of medullary canal with no signs of periosteal reaction, in such patients, multimodal approach including curettage of the sclerotic bone, stabilization of fracture ends, and corticocancellous bone grafting can be advised.[21][24][4]

Patients having foot pain for long-duration should get their foot pathology evaluated, as stress fractures of metatarsals can present without any antecedent history of trauma and can remain undiagnosed. These fractures may be missed on plain radiographic examination and should be evaluated with higher imaging investigations. Also, patients with metatarsal fractures should get them adequately treated and rehabilitated as neglected fractures can lead to painful conditions like Morton's neuroma, with persistent disability.

As a patient with a foot injury, including probable metatarsal fracture, presents to the clinic/ emergency, proper evaluation should be done. The radiological evaluation involves certain stress/ regular views of the foot; the radiology technician should be well aware of the positions of the foot in which various x-ray views need to be obtained. In cases with open injuries and neurovascular injuries, the services of a plastic surgeon may be required. Besides, in stress fractures occurring in elderly patients, thorough workup needs to be done by an endocrinologist as well as a geriatric medicine expert. As these injuries sometimes lead to foot and ankle stiffness, appropriate physiotherapy advice should be sought. 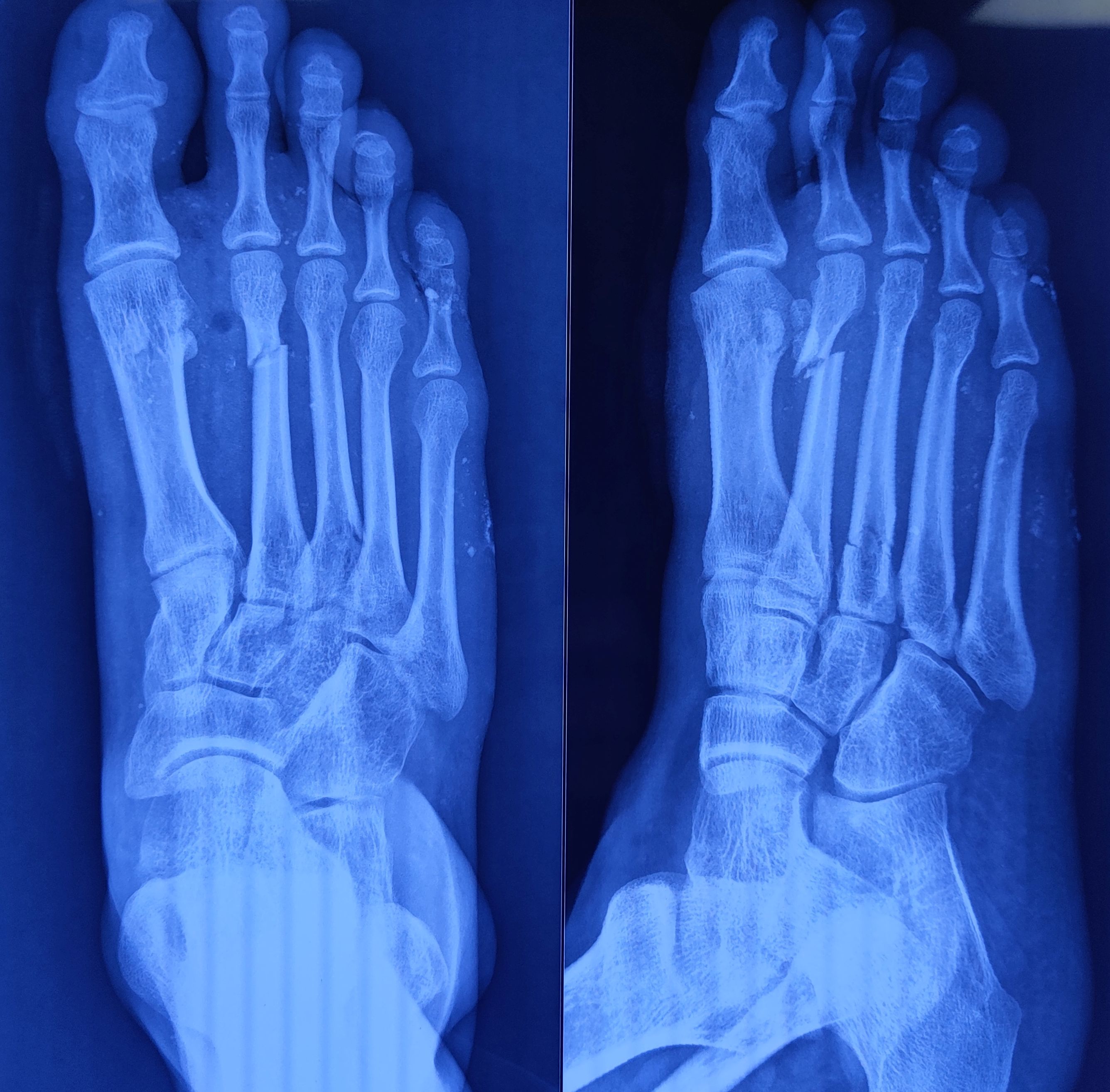 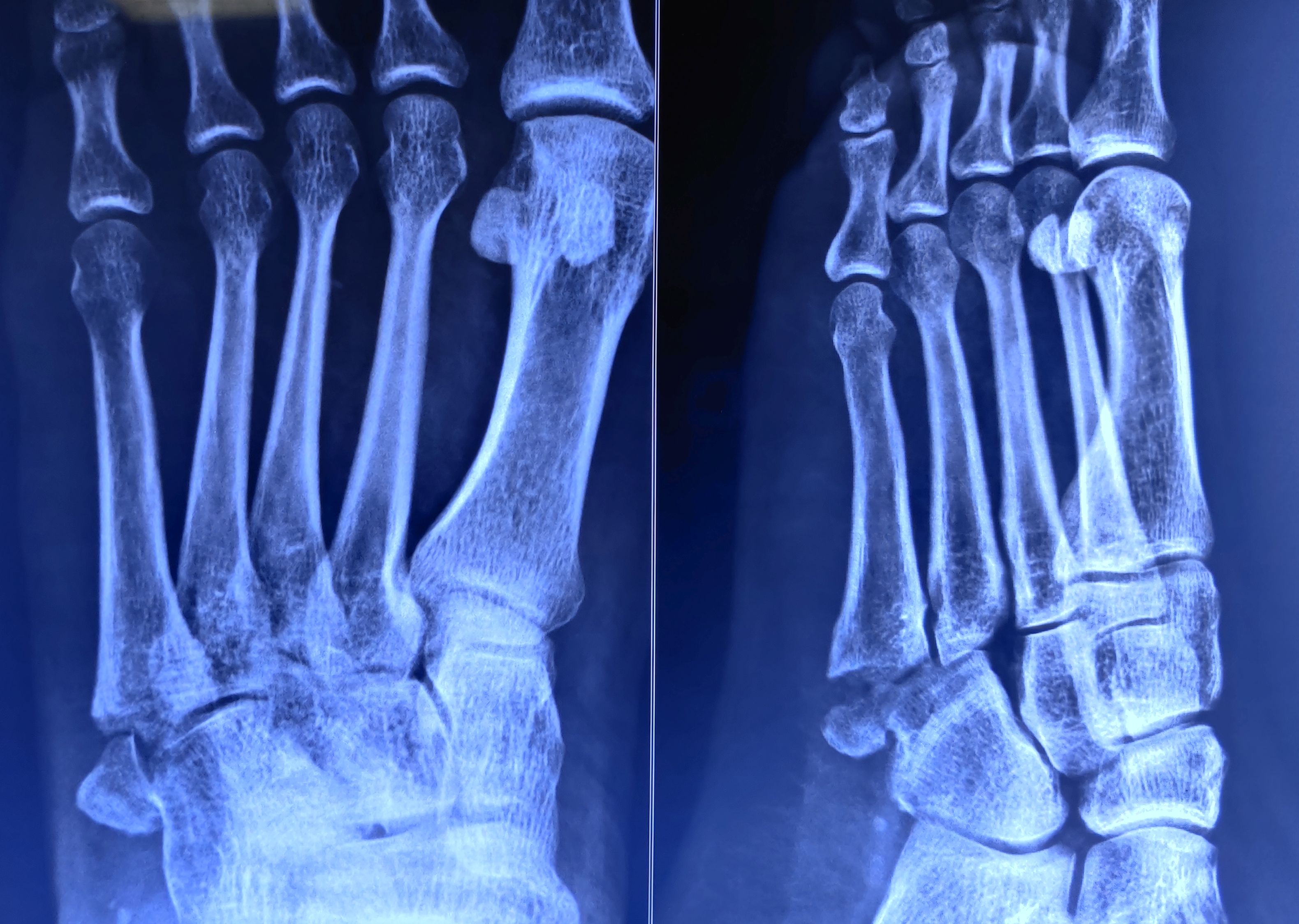 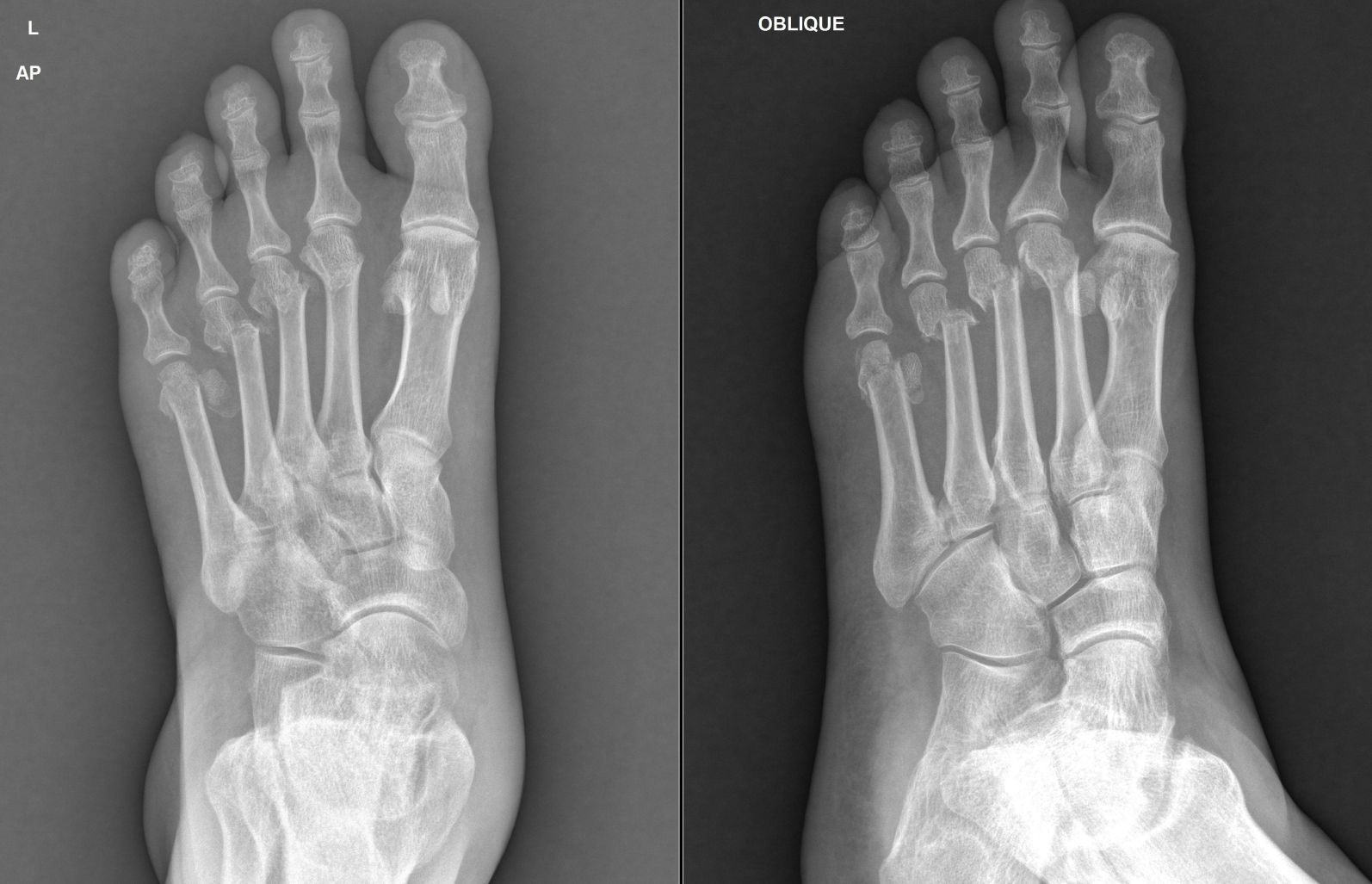 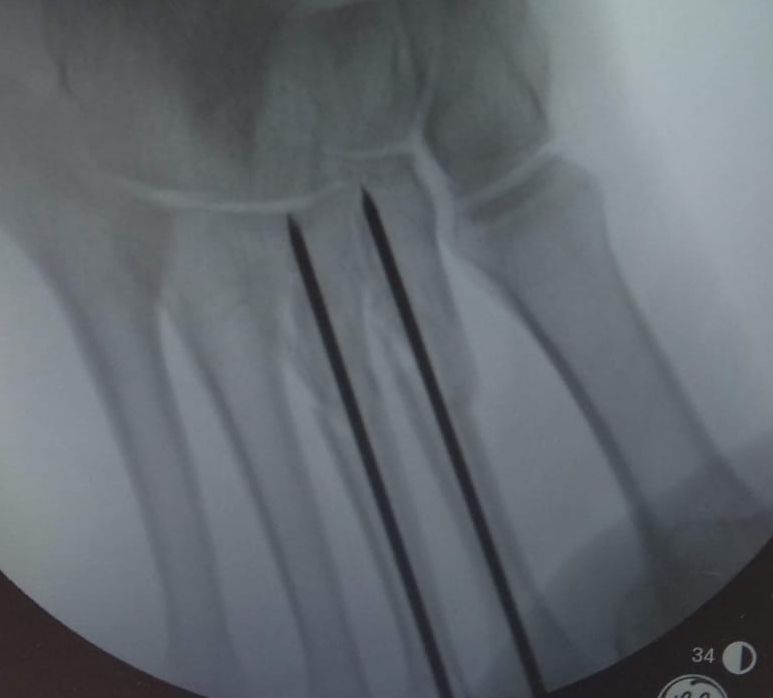 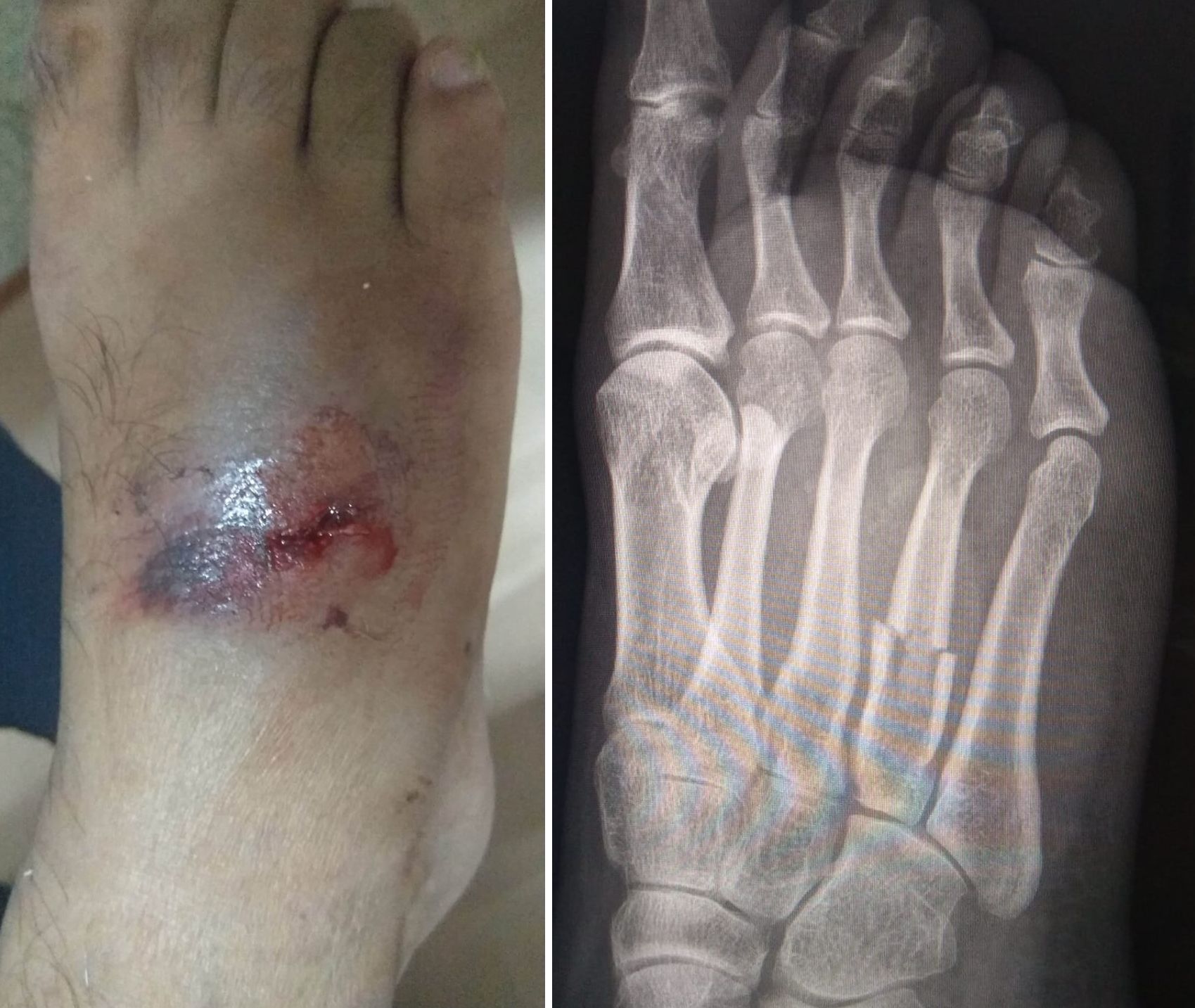 Torg JS,Balduini FC,Zelko RR,Pavlov H,Peff TC,Das M, Fractures of the base of the fifth metatarsal distal to the tuberosity. Classification and guidelines for non-surgical and surgical management. The Journal of bone and joint surgery. American volume. 1984 Feb     [PubMed PMID: 6693447]